With an impressive industrial heritage Hayle was the home of two great companies.
In 1756 the Cornish Copper Company established a Tin and Copper smelter along with a quay in the harbour. It’s sad that many of the remains of this industry were demolished soon after the Second World War.

In 1779 John Harvey opened his foundry which in a few short years was one of the industrial centres of Cornwall. As well as making the massive engines used to drain the Cornish Mines there was a ship building operation which constructed vessels up to 4000 tons. The boom in Cornish Mining brought great wealth to the Harvey’s and the town. During 1875 after a long dispute Harvey’s purchased the Cornish Copper Company, however soon after the turn of the century the foundry closed. Other notable achievements of the foundry include; the first Cornish Boiler used at sea, the construction of the first Steam Locomotive to be built and designed in Cornwall. Other engineering accomplishments happened over the years were too many to list. However, one of the most famous were the links created for the Clifton Suspension Bridge, designed by Isambard Kingdom Brunel in 1831 and completed in 1864 after his death.

There is still much to be seen around Hayle today, it’s worth a look around, the images on this page were taken in 2011/12 so it may have changed around there now. Hayle Gallery 2 – A piece of old machinery I spotted in the undergrowth, I am sure on digging around there would have been relics everywhere. 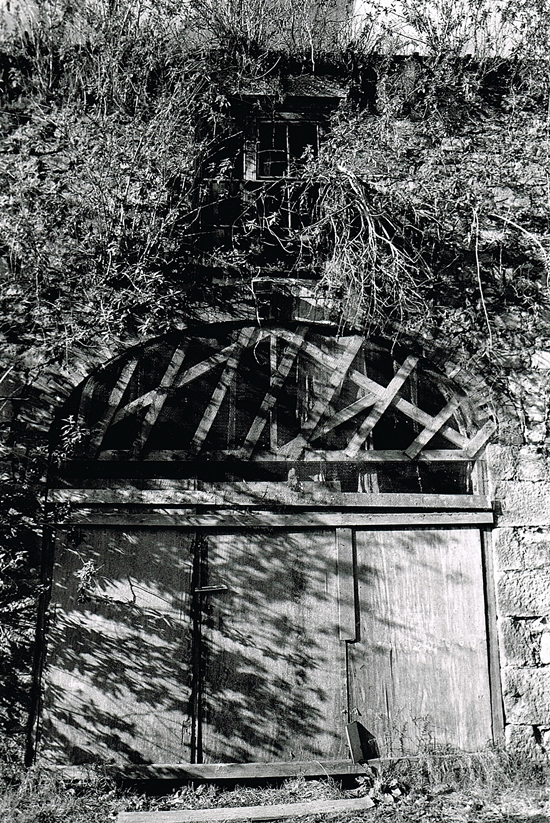 Hayle Gallery 3 – Along Foundry Lane are many remains of the Harvey’s operations.  This is one of the entrances to the Plantation Store. Formerly a beautifully built line of store houses, now all in a sad state of repair. 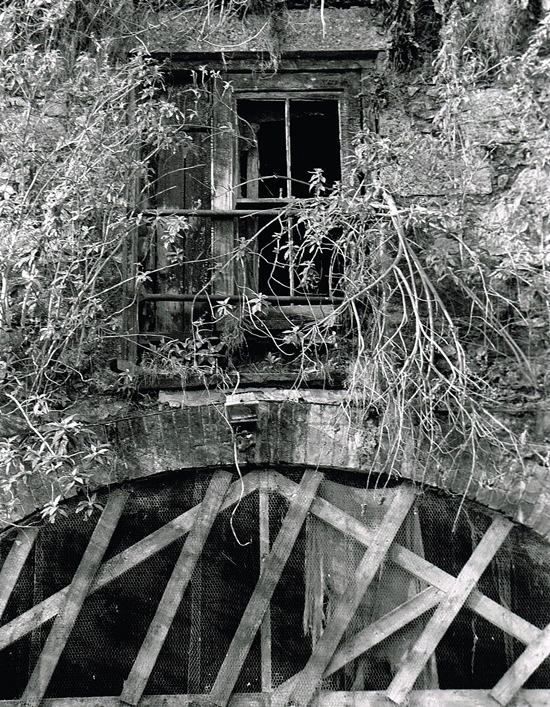 Hayle Gallery 4 – A detailed image of the window above the entrance. It was so sad to see the condition the wall was in. 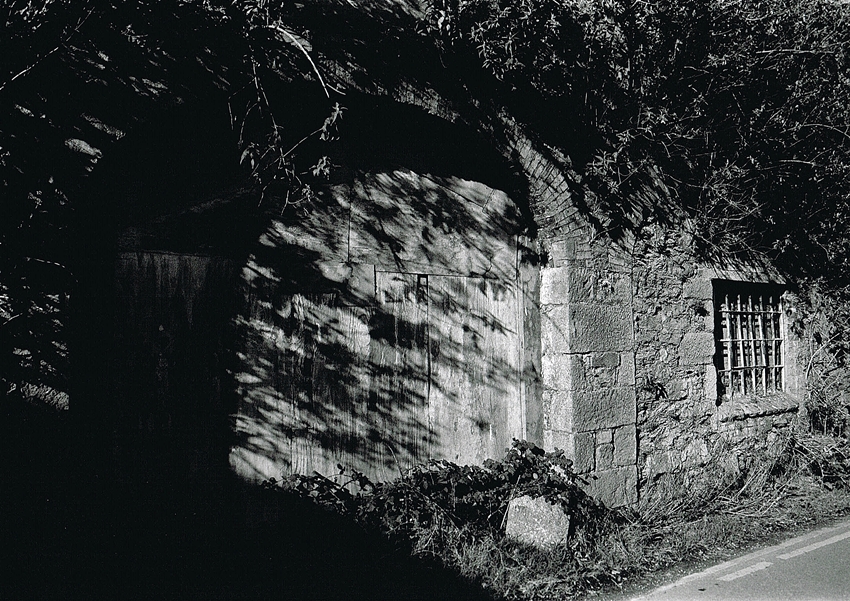 Hayle Gallery 5 – One of the other entrances to the Plantation Store, the fine granite blocks forming the archway can be seen clearly. Hayle Gallery 6 -One of the windows of the Plantation Store. 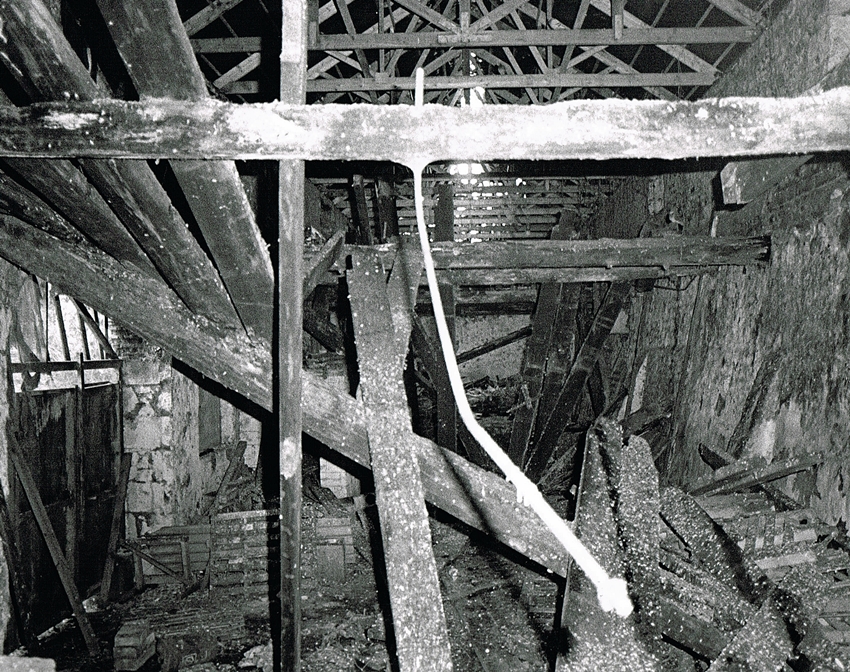 Hayle Gallery 7 -Walking up the side of the building there was an open window. I was lucky enough to get this image of the interior of the Plantation Store. 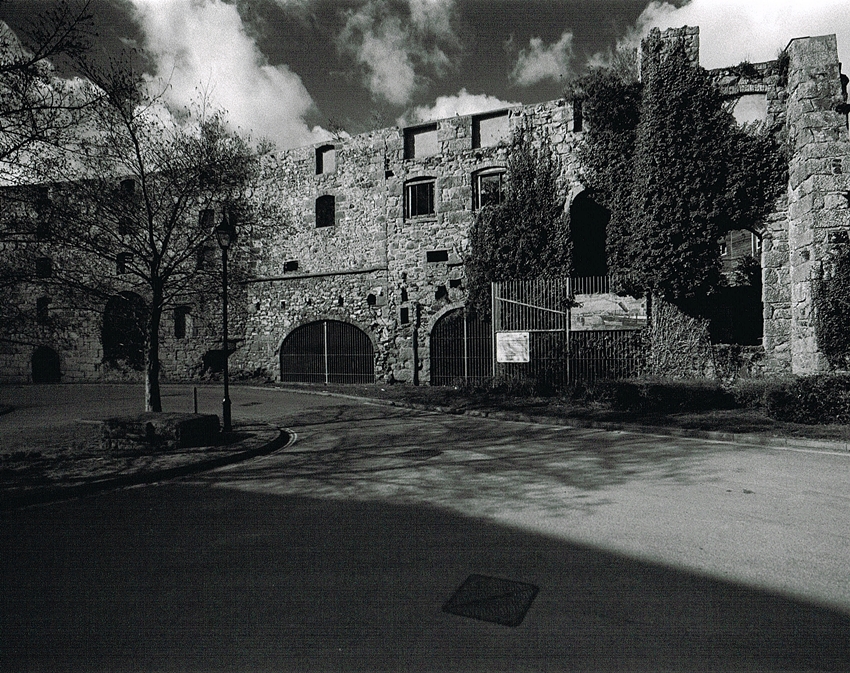 Hayle Gallery 8 -This is one of the main surviving Harvey’s Foundry buildings. It is huge, and very finely built. I believe it is the Granary Store (or Barn), Harvey’s used to use hundreds of horses for goods transportation and the moving of heavy machinery. With its graceful arches and multiple entrances perhaps this is where the animals were housed. 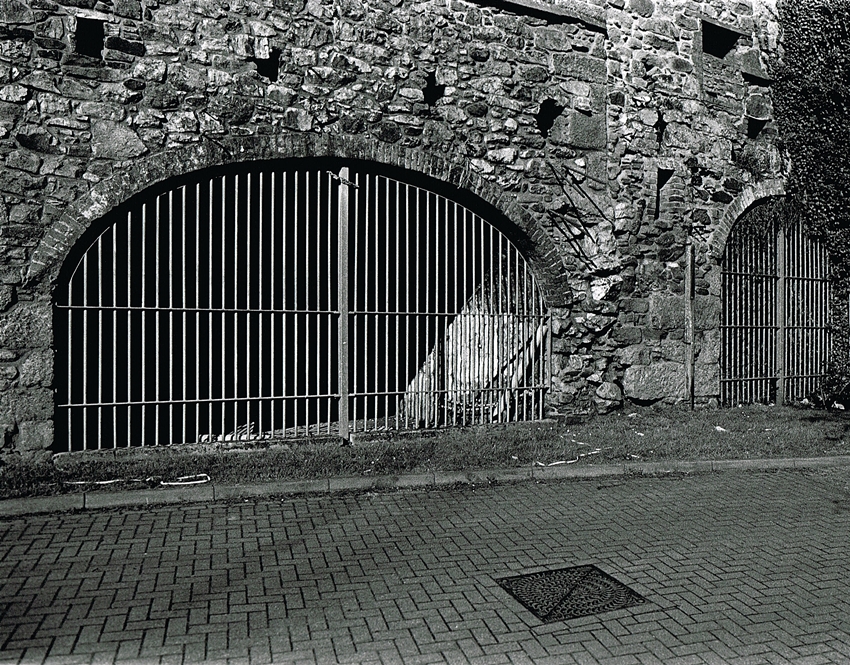 Hayle Gallery 9 – One of the amazing arches in the wall of the Granary Store building, I would have loved the chance to have a look around in there but it was all blocked off. 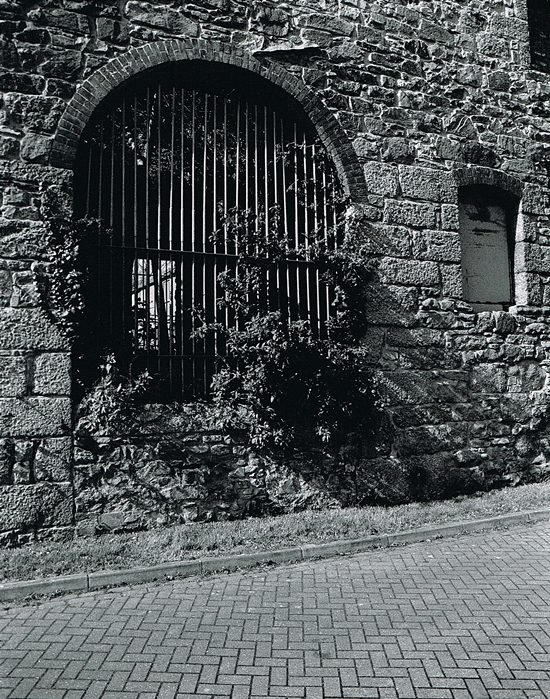 Hayle Gallery 10 – One of the smaller archways into the building, it was strange that this was above ground level, maybe it had a ramp leading up to it. 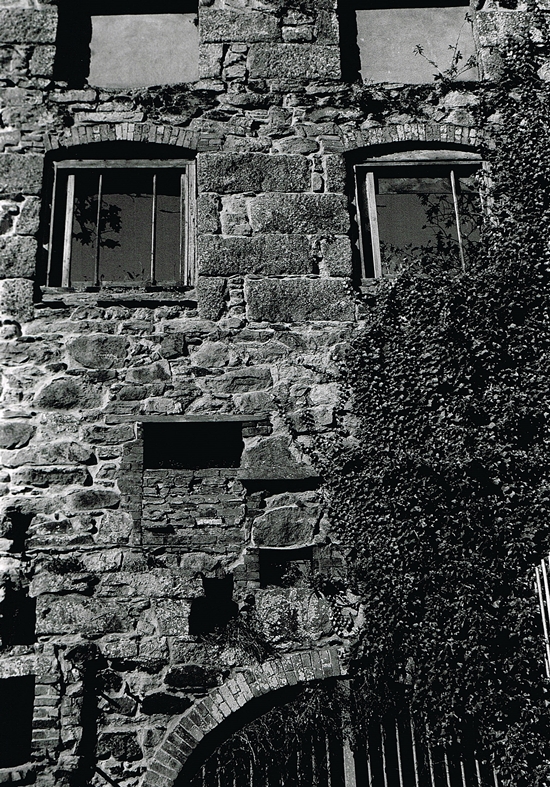 Hayle Gallery 11 – The roof like all the other buildings had long since fallen in, it’s a testament to the builders that it is all still standing, there are long term plans to convert all the remains into offices and Heritage Centres. 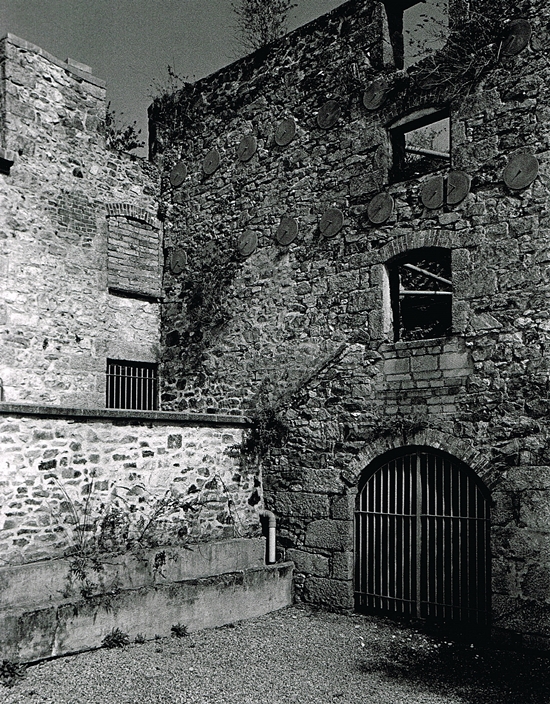 Hayle Gallery 12 -A detailed image of the Granary Store wall, the circular wall plates are a modern addition from the stabilisation of the building. 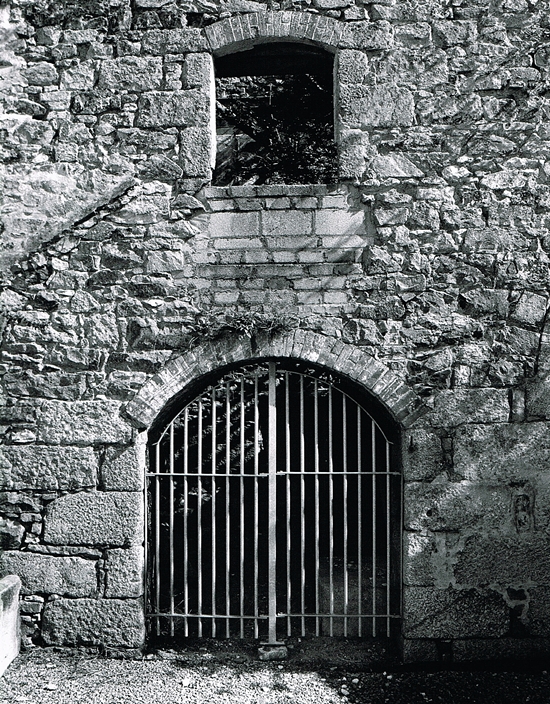 Hayle Gallery 13 – A closer look at the archway in the previous image. It would appear that some time or another the wall has received a repair above the arch. 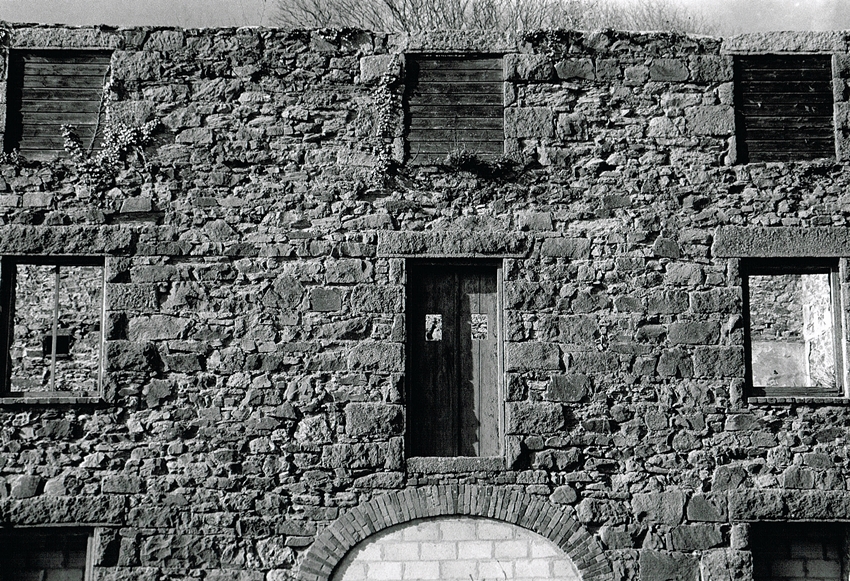 Hayle Gallery 14 – This is the ruined remains of the foundry “Pattern Shop” It is rather a lovely building, the balance of the windows is very pleasing to the eye. When I look at buildings like this I often wonder who looked out the windows….what did they see, who were they. 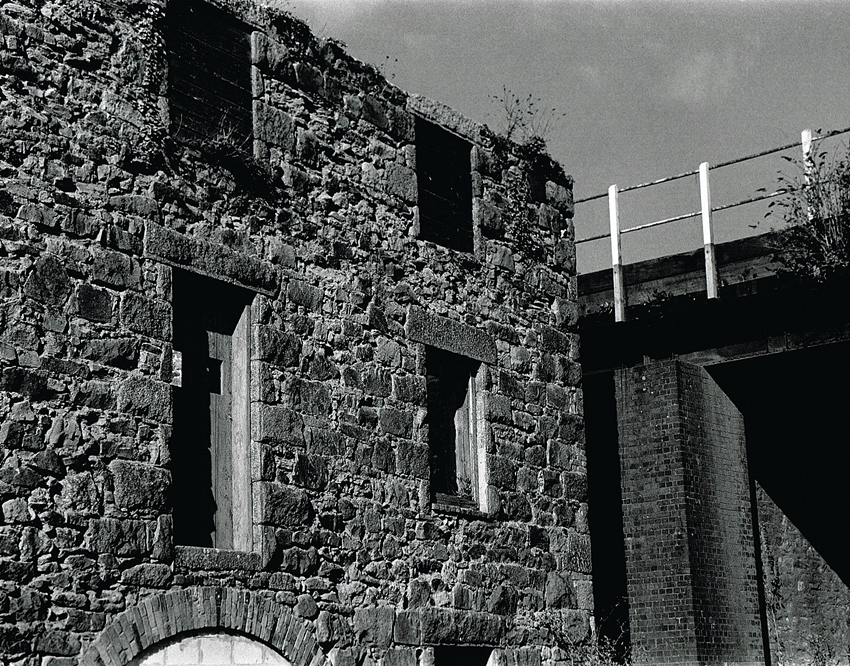 Hayle Gallery 15 – The Pattern Shop again, this image shows one edge of the main line viaduct. This carries the main train line out of Cornwall. 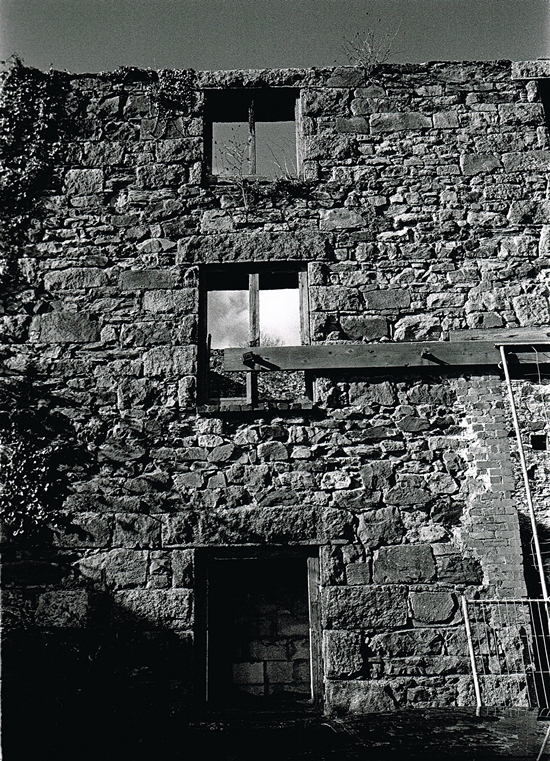 Hayle Gallery 16 – A detail of the Pattern Shop wall, solid stone construction with some brick edges. In some respects its amazing it is still standing. Like most Cornish buildings it was built to last. 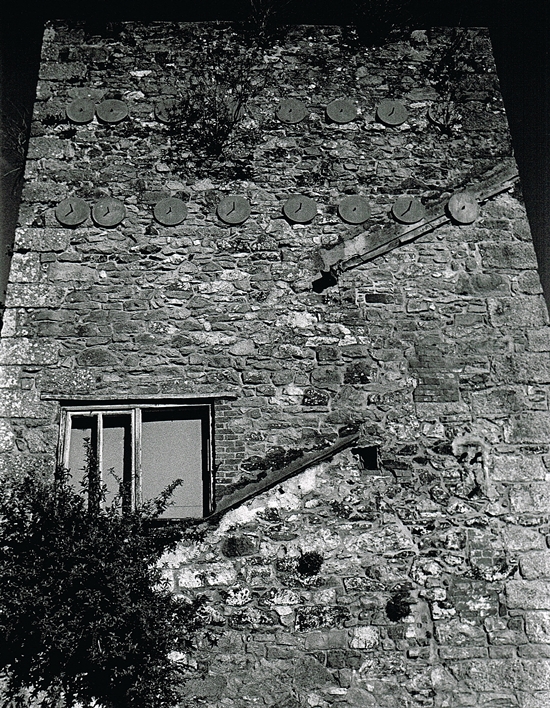 Hayle Gallery 17 – The side wall of the pattern shop, there appears to be a roofline suggesting there was another building here as well. The wall has been strengthened by the addition of circular plates. 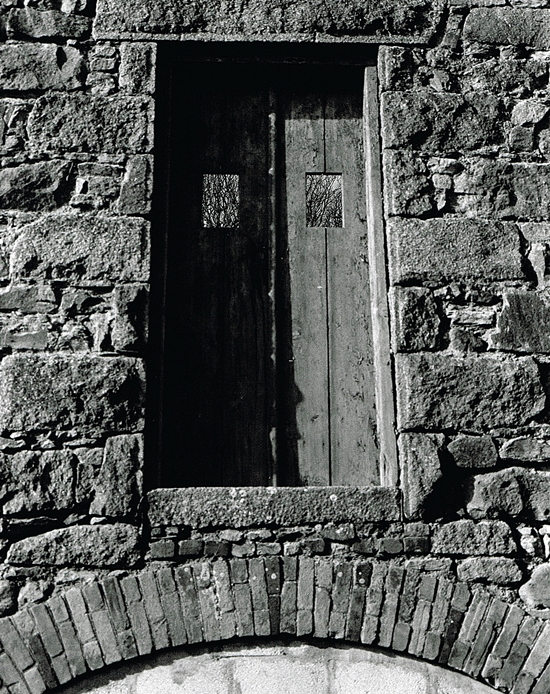 Hayle Gallery 18 -A detailed image of the doorway in the wall the the ruined Pattern Shop. 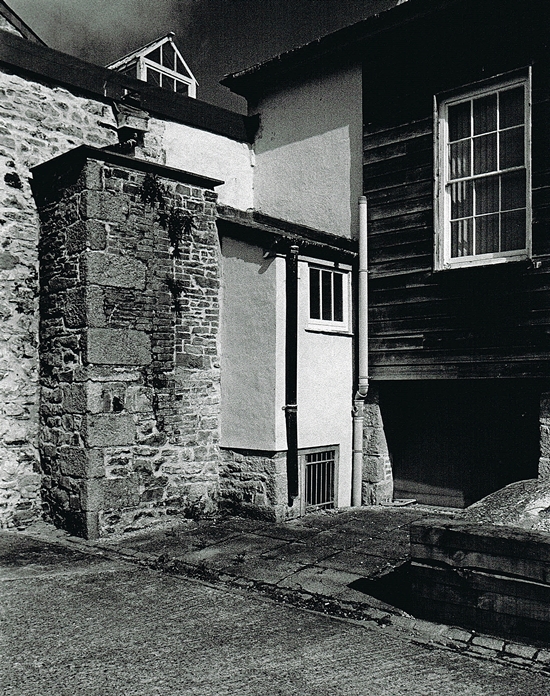 Hayle Gallery 19 – The old and the new. Subsequent new buildings and offices are being incorporated into the ruins of the foundry.

The rest of the images on this page were taken along the South Quay. Known as Harvey’s Wharf as the Harvey Foundry was responsible for its construction in the early C19th. In recent years there has been an Asda Superstore built on the site which has changed the historically important area dramatically.
The remaining area of the South Quay is now a carpark with the remainder scheduled for building. I was shocked at the changes I saw, the images below were taken in 2011/12. Hayle Gallery 20 – These are Sluice Gates that used to control the flow of water into the closed off area known as Carnsew Dock.(Carnsew Pool)
These were originally constructed by Harvey’s Foundry when they deepened Penpol Creek and built their own dock. This tidal lagoon was created to flush the harbour channels at low tide in order to control the large amounts of silt that built up. 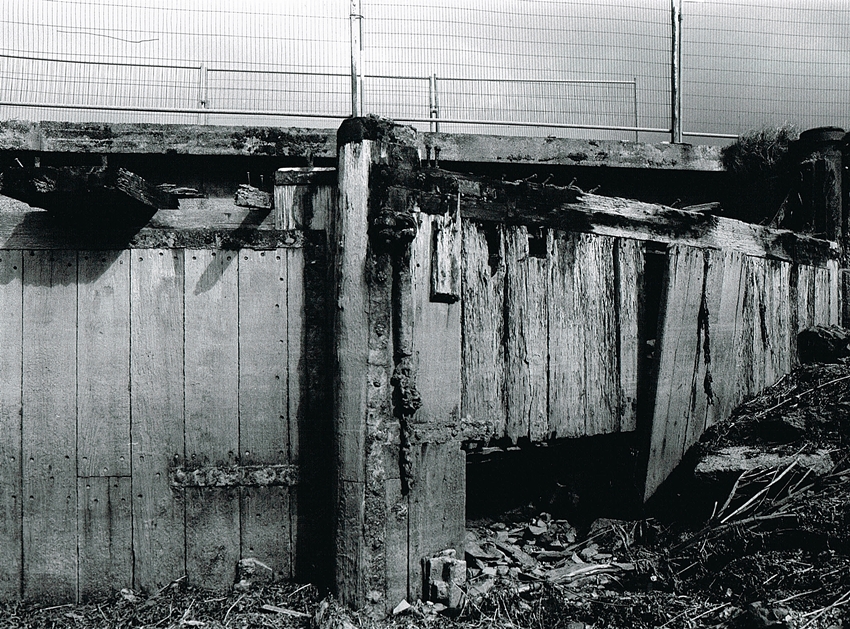 Hayle Gallery 21 – Another wider view of the Sluice gates which have now been removed and replace with new. The bridge above has also been rebuilt. These were obviously very old and had been repaired many times. Some of the metalwork mounted on the gates could have easily dated back to the Harvey Foundry times. 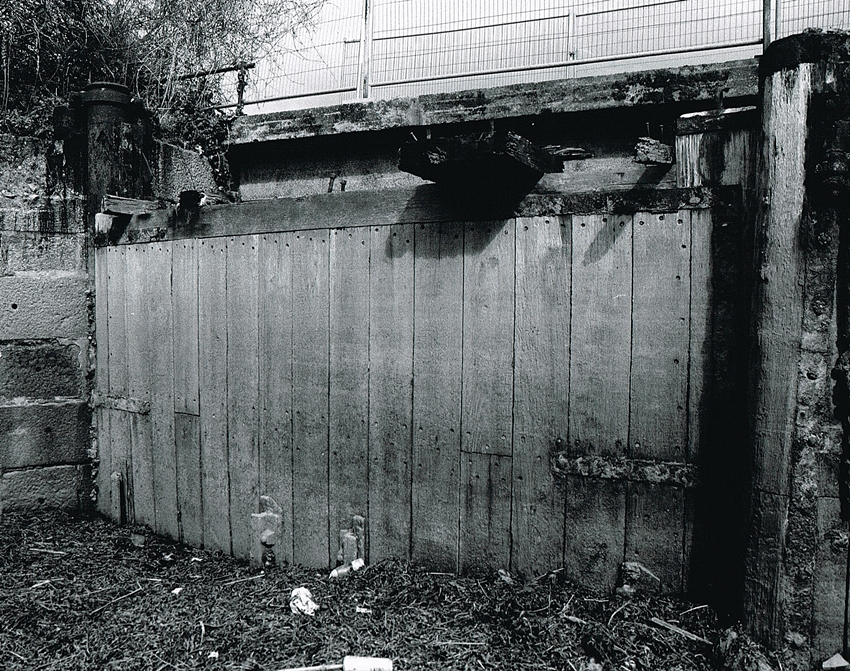 Hayle Gallery 22 – A final image of the sluice gates, the remains of these are now piled up on the wharf nearby. On the other side of the sluice there was a pile of metalwork obviously found when the Asda was built. Along with other bits there was a section of what looked like rising main. Sadly these are not preserved.

The remaining images on this page were taken as I walked along Harvery’s Wharf. Sadly there is an Asda superstore in the way now. 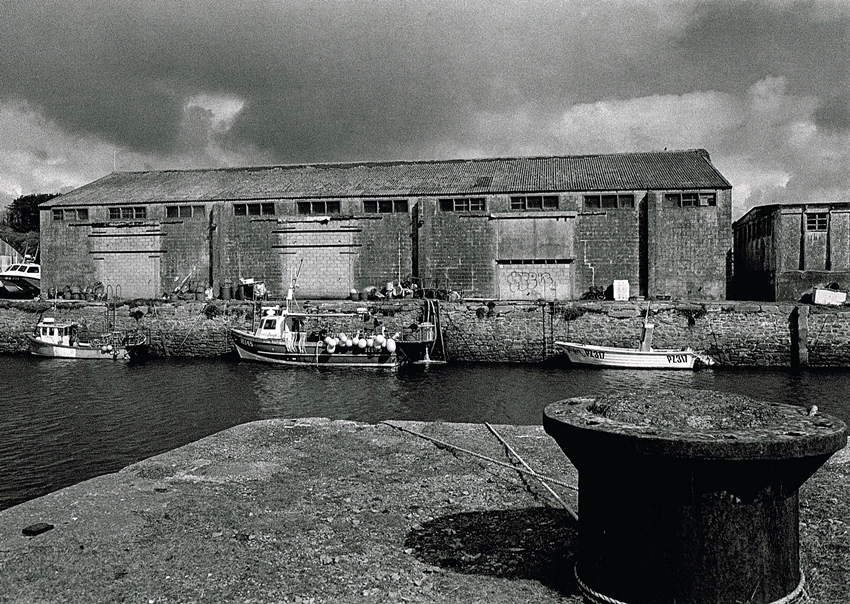 Hayle Gallery 23 – This image is looking over at the warehouses on the East Quay. This was built in the early C19th for the Cornish Copper Company. Predominantly huge amounts of coal from South Wales was brought here by sea to fuel the local industries. When I went back to Hayle in 2018 there is now a floating dock along the harbour wall. 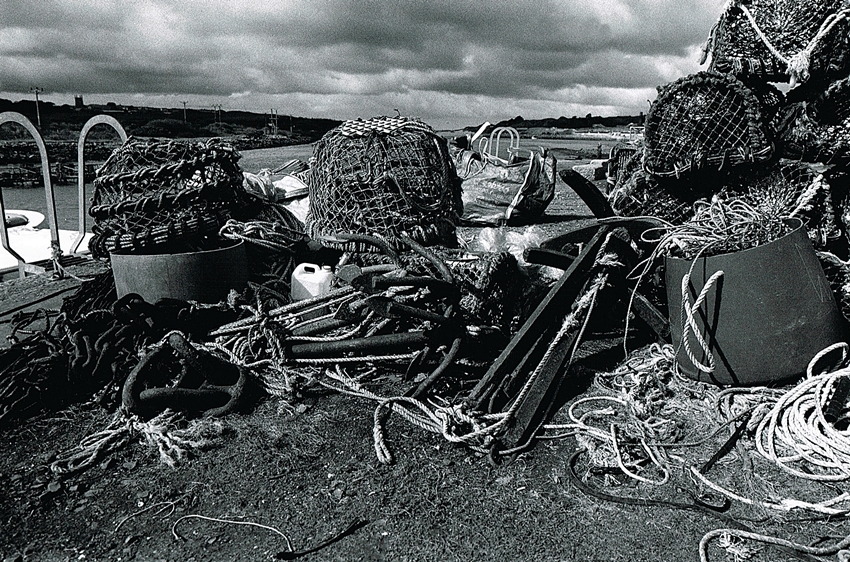 Hayle Gallery 24 – Lobster and Crab pots piled up at the end of the South Quay. Whilst in the background is the channel that flows out to sea. 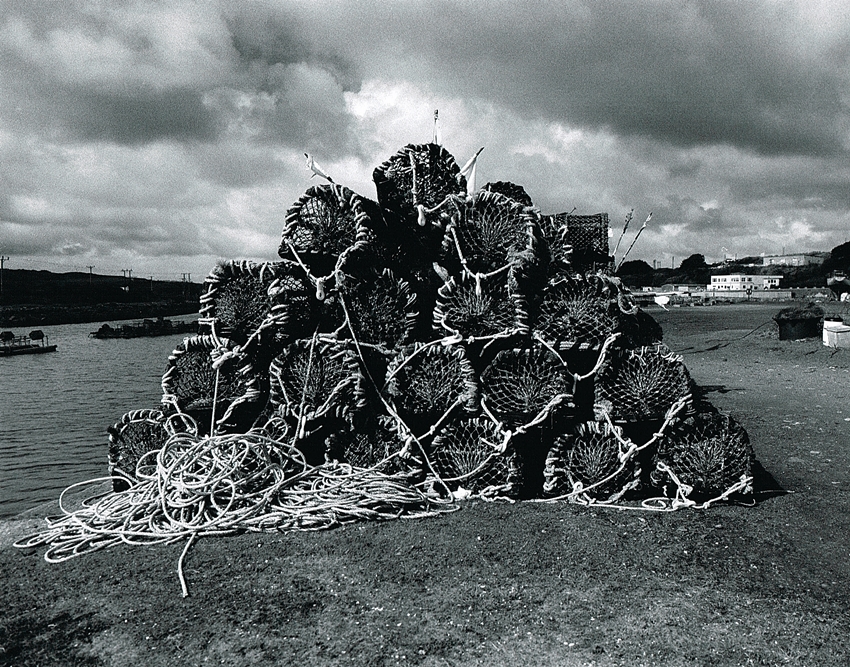 Hayle Gallery 25 – It is sad to me that all this has now gone. In the right hand side of the image can be seen the remains of the control room of the Power Station up on the hill. 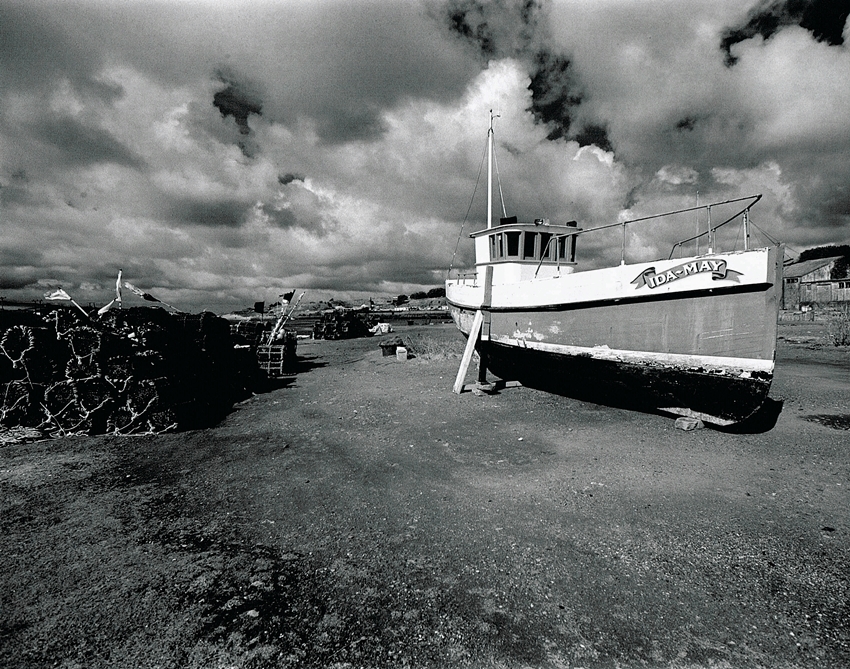 Hayle Gallery 26 – The South Quay was a popular place to work on boats. Along with the dramatic sky this makes quite a good image of the IDA-MAY. 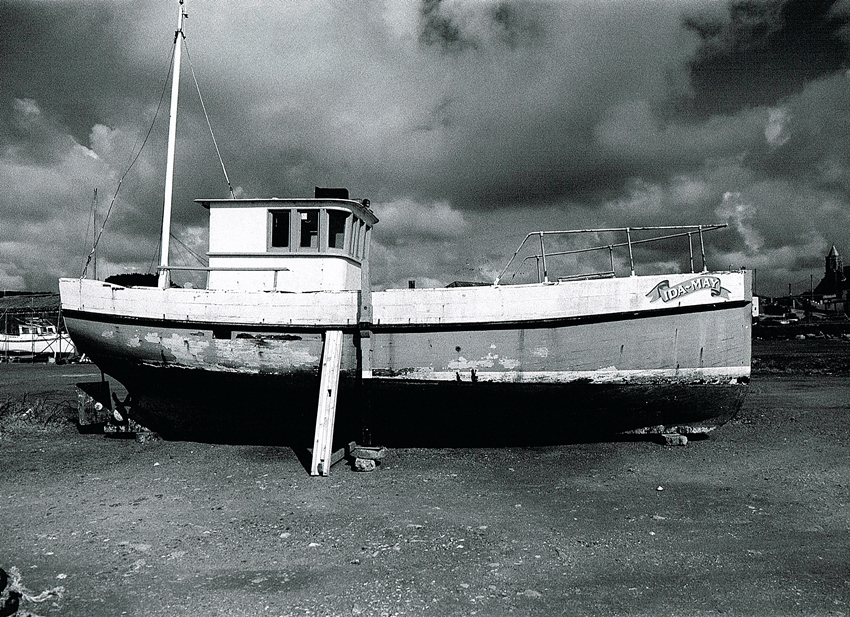 Hayle Gallery 27 – Another image of the IDA-MAY. It looked like it had been out of the water for a while. 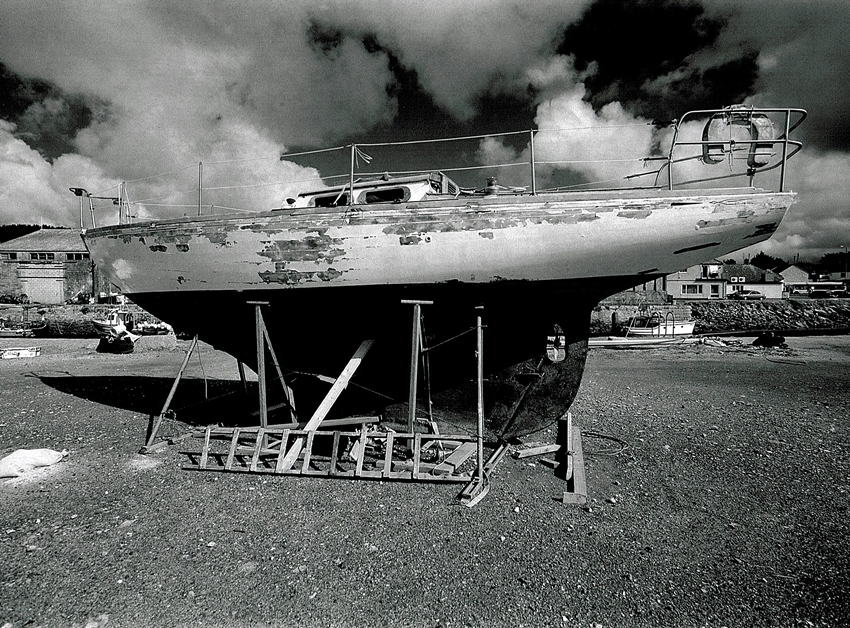 Hayle Gallery 28 – This was one of my favorite images of the day. I was using a Rollei film for the first time. I found it very difficult to use where shadows are in the image. However on a illuminated object such as the boat above the contrast, sharpness and grain are spectacular. This was taken on Harvey’s Wharf. In the background is the East Quay warehouses.

For more information about Hayle and its history, follow the link: www.harveysfoundrytrust.org.uk