The Portreath Tunnel, this is a series of photographs recently given to me by a friend. As far as we know there are no copyrights attached to these. Because these were originally sepia prints I have converted these to Black and White.

They are a set taken whilst the tunnel was being driven as part of the “Redruth Joint Drainage Scheme” during the years 1929-31. The portal still drains from the cliffs below RAF Portreath, the pumping station is situated along Penberthy Road on the outskirts of the village. 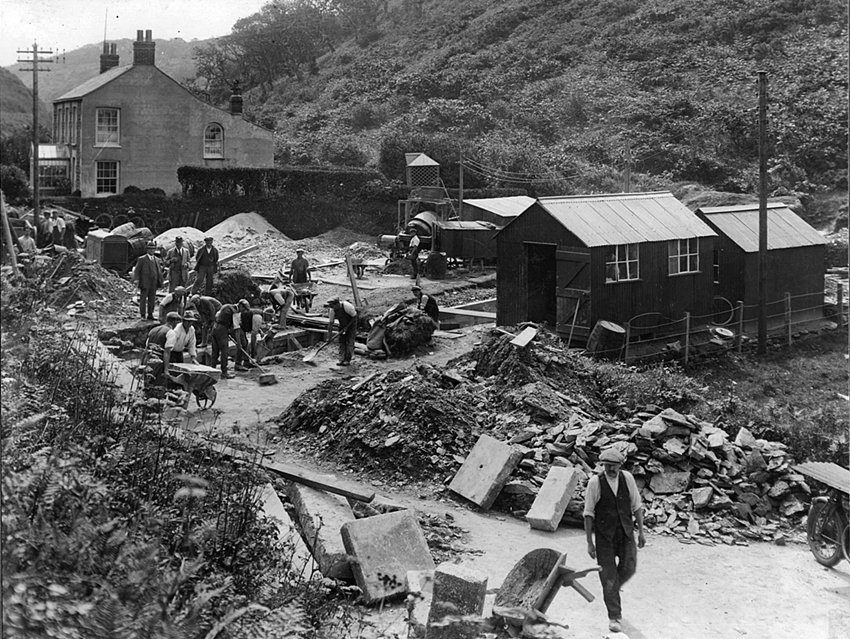 Portreath Tunnel 1 – Firstly, a general view of the works for the tunnel, this is where the present day pumping station is situated. Also, the house in the background remains today little changed. 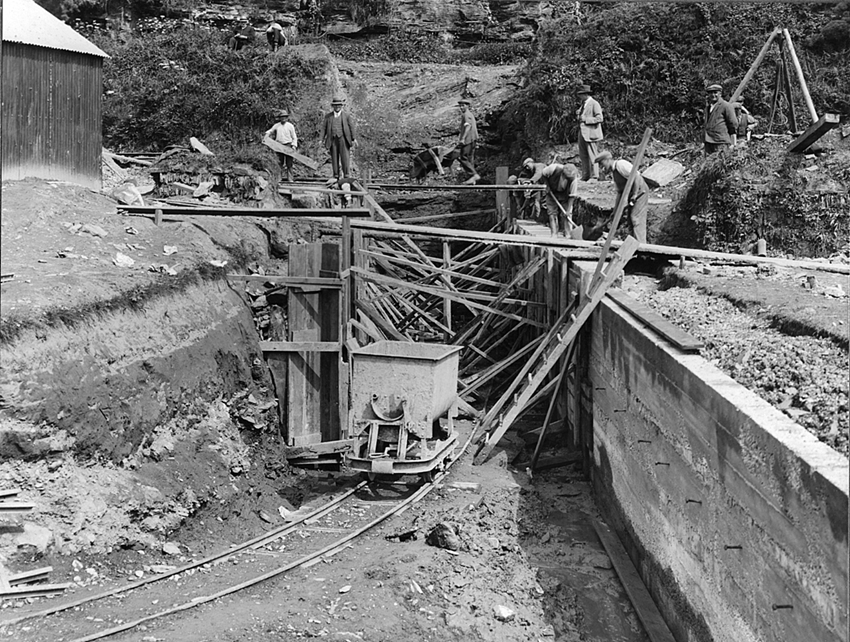 Portreath Tunnel 2 – Nothing would appear to be simple, this image shows a possible collapse of ground at the entrance. 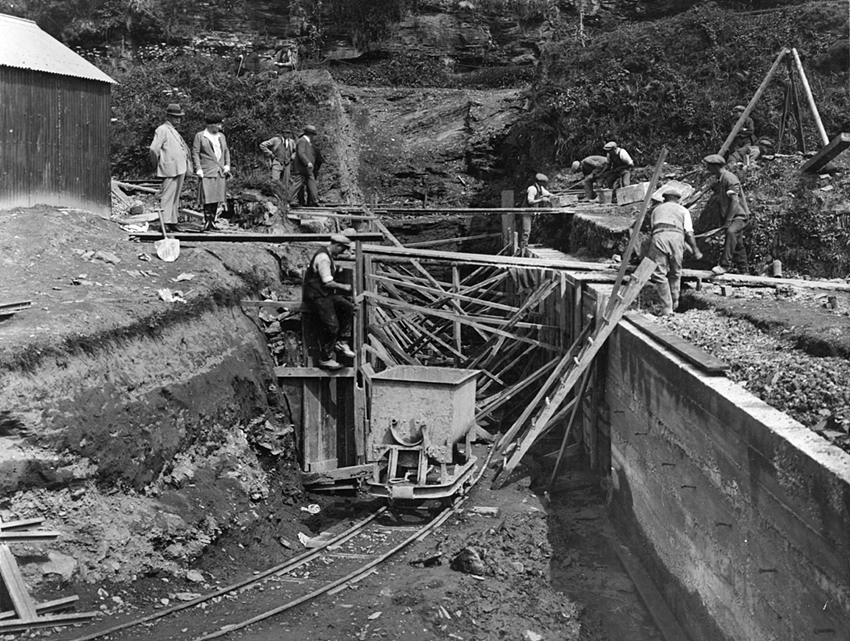 Portreath Tunnel 3 – Another image showing the collapsed timbers are steadily being cleared away. 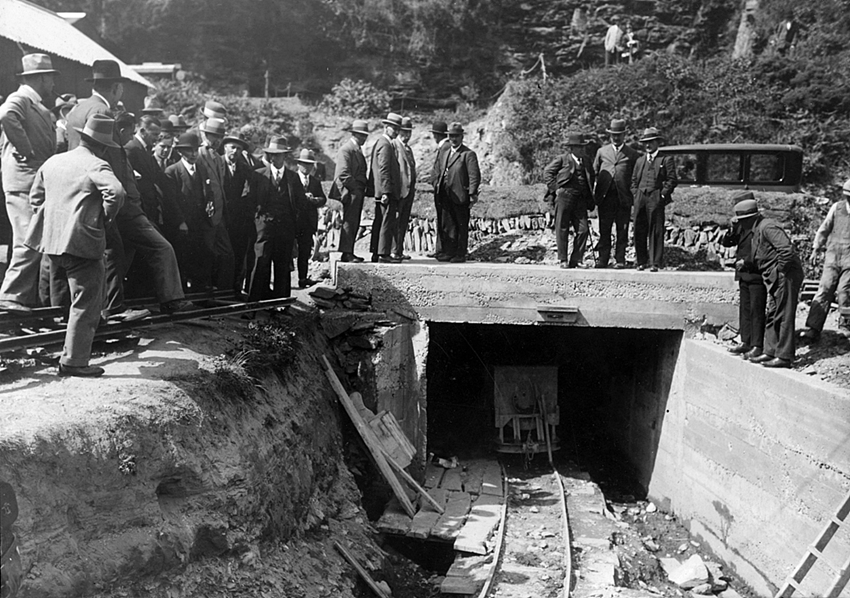 Portreath Tunnel 4 – An image of the completed portal to the drainage tunnel which goes under the road. Furthermore, in the background is a small quarry which can still be seen along the Tramway. 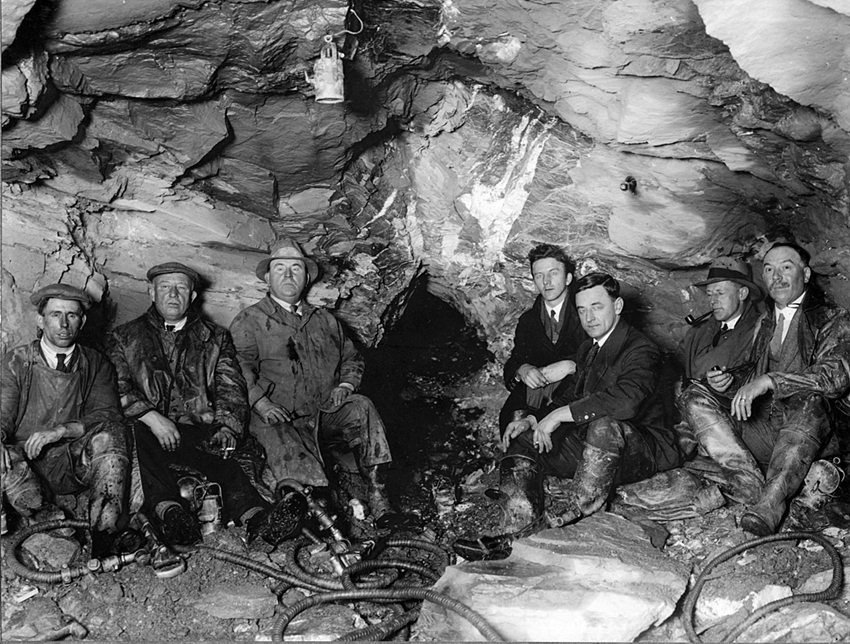 Portreath Tunnel 5 – Inside the workings this shows a group of visitors posing for the photograph. The tunnel appears to lead on in the background. 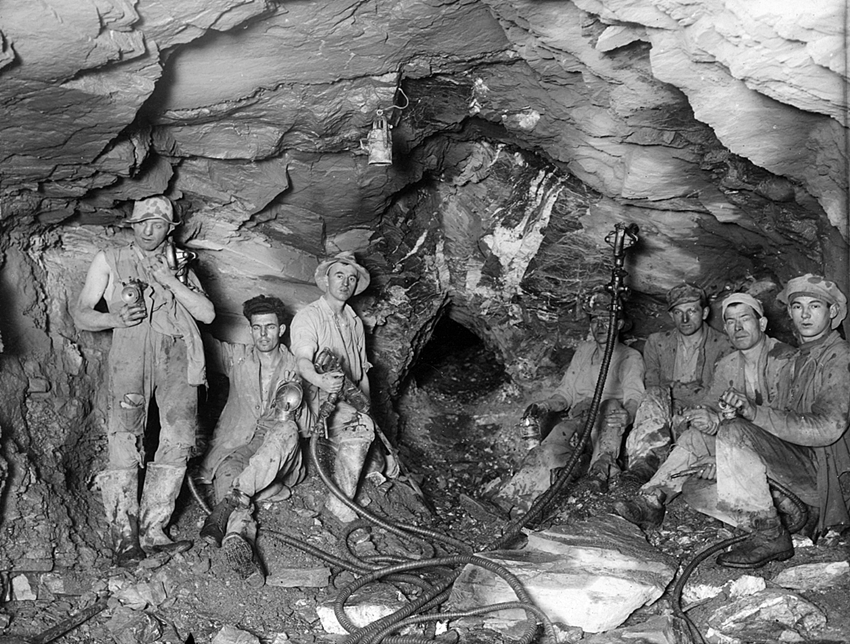 Portreath Tunnel 6 – Similarly a group of underground workers in the same place in the tunnel. The compressed air drill is connected to the air compressor and ready to work. Also a carbide lantern is hanging from the roof, and several miners are holding similar lights. In contrast to today, there are no helmets or safety gear, modern Health and Safety would never allow this to happen. As a result of the magic of Facebook one of the miners is named as Paul Rule, second from right. 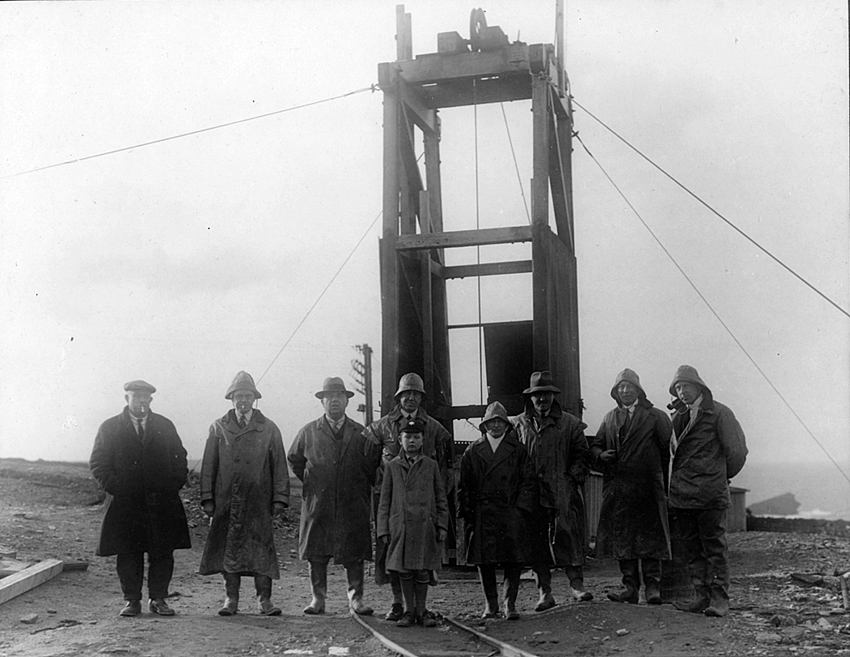 Portreath Tunnel 7 – A group of visitors including a small schoolboy stand infront of a small headframe and winding gear used on the project. This is taken on the cliffs and is probably directly above the Portreath Tunnel portal. 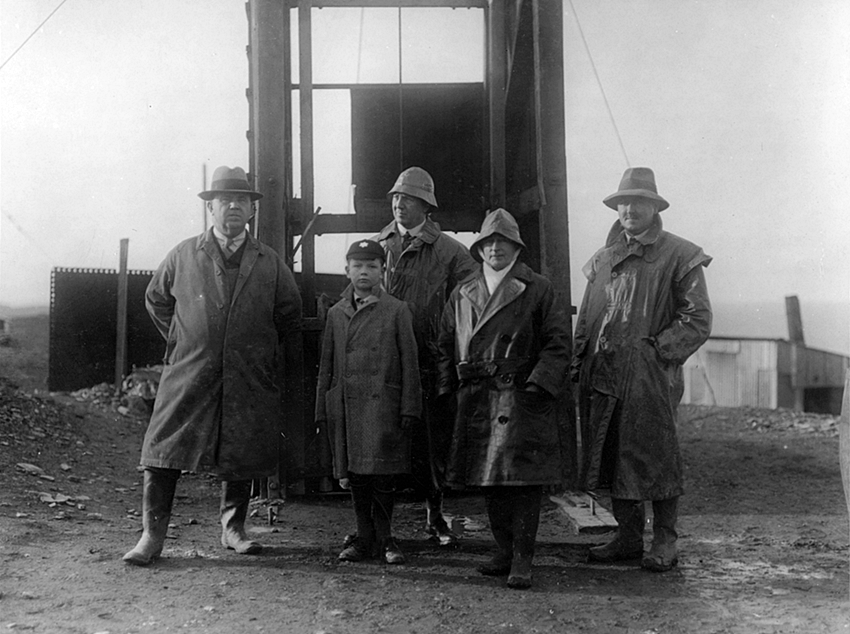 Portreath Tunnel 8 – A second closer image of the headframe, in the background are small temporary buildings.

News reports from researcher Malcolm Nott: The Cornishman – 17 July 1930 REDRUTH-ILLOGAN DRAINAGE SCHEME INSPECTED. The Cornwall Surveyors Association paid their summer visit to Redruth on Thursday, when they inspected the ‘work in progress on the Redruth-Illogan joint drainage scheme.

The party was conducted around by Mr. Jaines D. Haworth (the consulting engineer of the scheme), who explained the scheme. After the morning tour the party was entertained to lunch by Mr. Haworth, at the Masonic Hall, Redruth, and later to tea at Gooden Heane Cliff.

The estimated cost of the Redruth Urban District Council’s scheme is £44,000 and the estimated cost for the rural portion is £80,000. The morning’s itinerary started from the railway station and the first visit was paid to Blowinghouse, where, under the county main road, the sewer was inspected. Another visit was paid to inspect a sewer under the Great Western Railway main line, which will be 400 feet long, which forms part of the Eastern valley sewer. Portreath Tunnel 9 – Another image of the same group of visitors standing as the Portreath Tunnel cliff portal. Rails are in the floor of the tunnel to accommodate the wagons used to dump the waste.

The party then proceeded to the Redruth reservoir, which was explained by Mr. T. M. King (surveyor of the Redruth Urban District Council). The party then went to the Helston road at Four Lanes, where the Atlas Diesel spades and shovels were seen at work and nearby the “Ruston” trench excavator was at work.

After lunch, the party proceeded to inspect the works at Portreath in connection with the scheme and the diversion of the Red River. There the works consisted of a conduit from the river to the face of the tunnel, with a strong steel and concrete bridge carrying the county road. The tunnel designed to deal with a flow of water equal to the second highest flow known in the Red River.

At Gooden Heane cliff the party clad themselves in oilskins and thigh boots, and descended a shaft 200 deep to inspect the tunnel. So far the tunnel has been driven distance of 1,100 feet, but when completed the total length will be 1,100 yards. The sewage will be discharged into the sea at a point three feet above the ordinary spring tides. 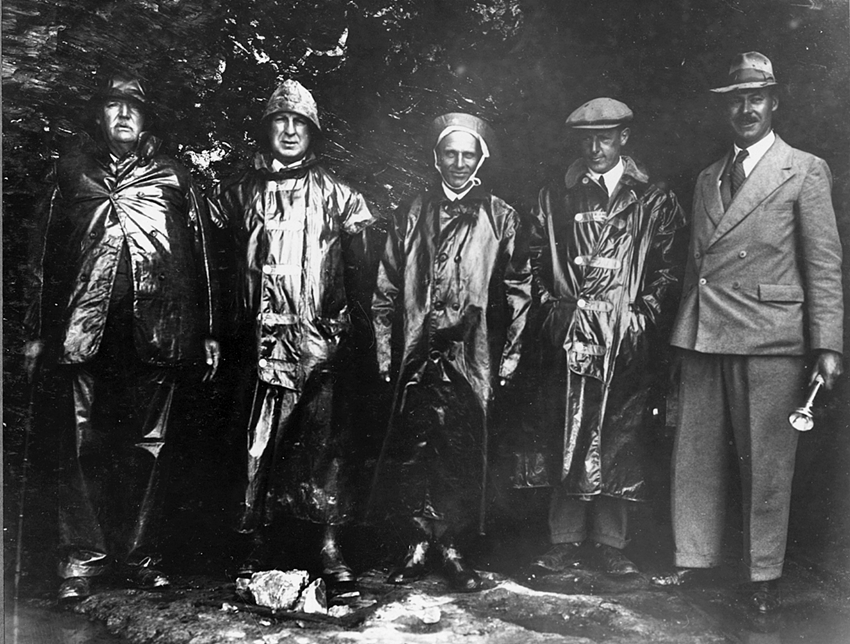 Portreath Tunnel 10 – A very wet group of visitors probably at the cliff portal, no safety gear is evident, different times.

THE PORTREATH TUNNEL. THOUSAND VISITORS INSPECT IT. About 1,000 members of the general public on Thursday availed themselves of the opportunity of inspecting the joint tunnel at Portreath, which has been constructed in connection with the Redruth and Illogan drainage scheme. The tunnel was lit throughout its length by electric light, and the visitors, who were conducted in groups of a dozen by members of the Joint Drainage Committee.

They were able to obtain a fine view of the rugged cliffs, for the mouth of the tunnel emerges just above high-water mark almost a mile north of Portreath. Numerous children from the Redruth and Portreath Council Schools, under the charge of their teachers, were among the visitors. Furthermore, the youngsters displayed considerable interest in the work. Mr. F. R. Pascoe (Mayor of Truro) also inspected the tunnel during the day. 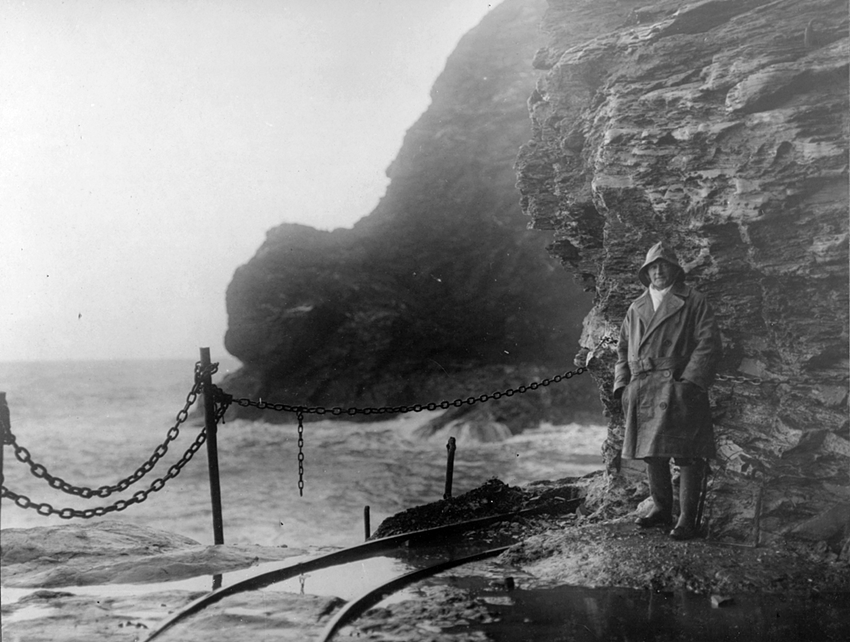 Portreath Tunnel 11 –  Finally, an image of the cliff portal looking out to sea, chain link fencing is the only barrier from the rough seas. Because the tram rails end here, it looks like the side tipping wagons dumped their load here into the water.

The workmen who have been employed on the work were entertained at lunch and tea by the engineer (Mr. J. E. Haworth), as were members of the Redruth and Illogan St. John Ambulance Divisions. Who were under the charge of Supts: W. Lanvon and J. H. M.Craze respectively. Nurses from the West Cornwall Miners’ and Women’s Hospital were also present. No charge was made upon the visitors to the tunnel. A collection was taken in aid of these three organisations.

The Portreath Tunnel is 1,072 yds. in length. Subsequently driven through solid rock from end to end. The authorities concerned have been the Redruth Urban District Council and the Redruth Rural District Council. The estimated cost to these bodies respectively is £46,700 and £86,625, which figures include the joint sewer and tunnel. The contractors are Messrs. Carkeek and Sons Ltd, work commenced in July 1929. The System will be in full operation by November 30th.