South Crofty Mine was a very special place to me. When it finally closed in 1998 it was heartbreaking to see the effect on the local community. I had made some good friends there and I always seemed to be welcome. Good days and good times. 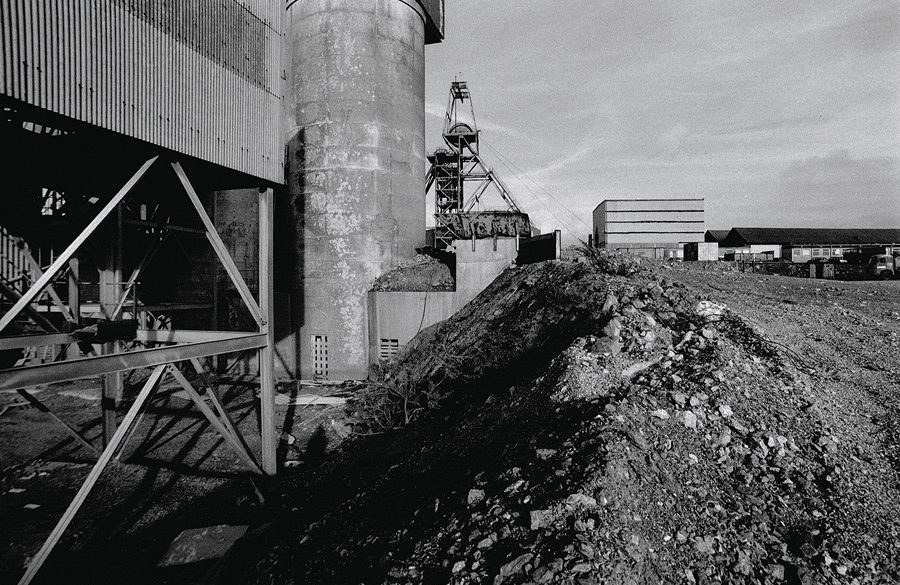 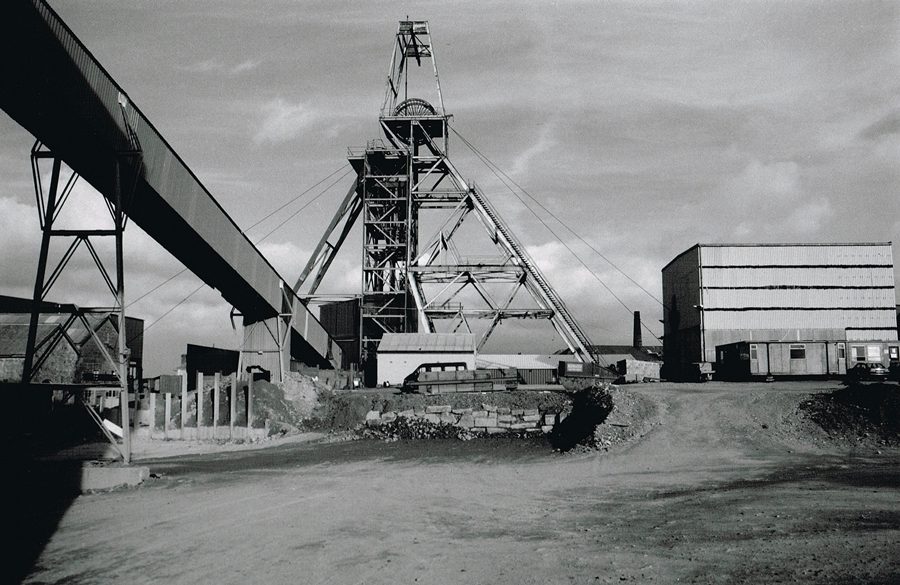 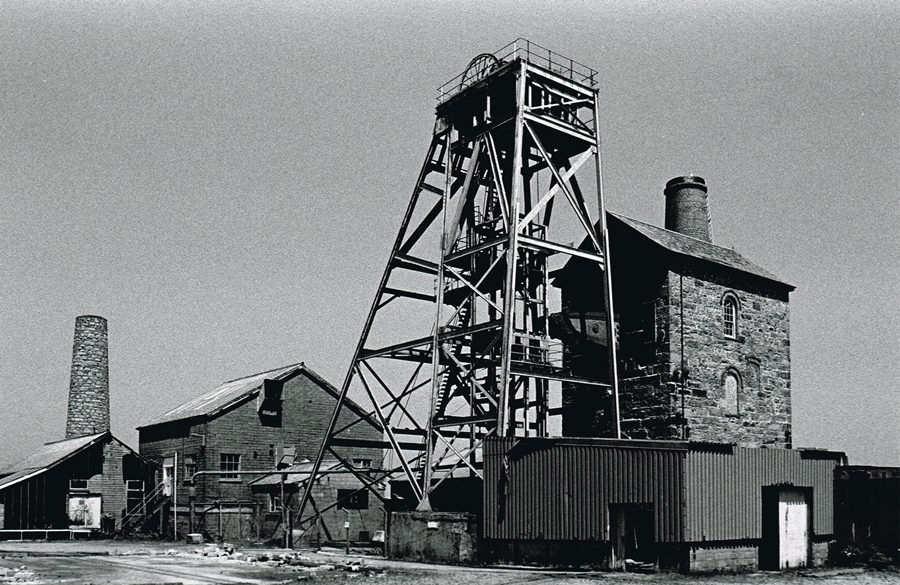 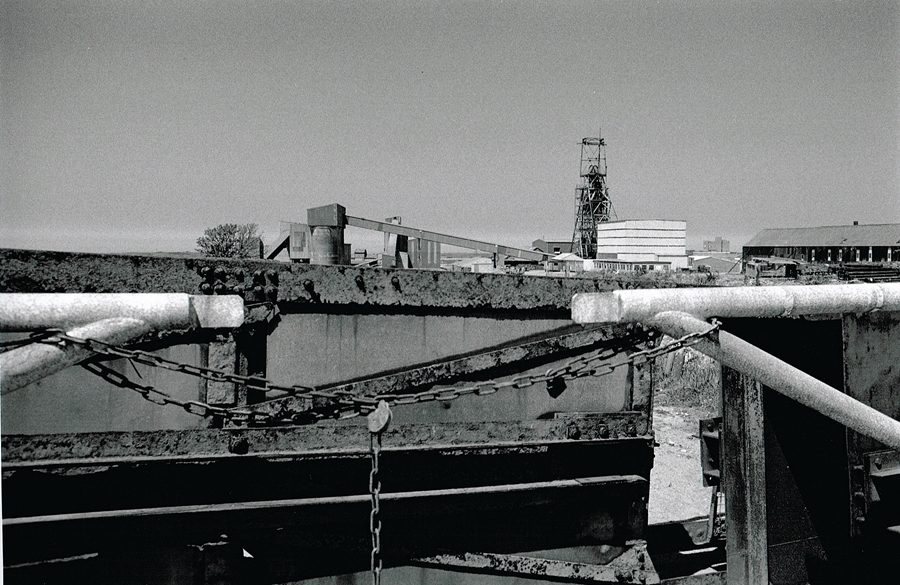 The information on this page was written by my late friend Dr Nick LeBoutillier. It was reproduced here with his permission. Nick knew South Crofty and the Geology of Cornwall intimately.

South Crofty Mine is situated mid-way between Camborne and Redruth at Pool in Cornwall. It began life as a small mining sett called Penhellick Vean in the 1590’s. As it grew it absorbed the smaller mines around it, becoming South Wheal Crofty in 1854. It was initially a shallow tin mine and then a copper mine. The mine workings went back into the deep tin zone from the 1860’s and copper production began to decline.

In 1906 South Crofty Mine Ltd became the foundation of the modern mine. From the 1890’s onwards the mine acquired other setts as the surrounding mines closed. These included New Cook’s Kitchen Mine, Tincroft & Carn Brea, North Roskear, South Roskear and Dolcoath Mine in 1930.

Finally, it had become a huge enterprise spanning nearly 4.5 km in length. The modern South Crofty was worked for Tin, Arsenic and Tungsten during the early 20th century. However, by the 1960’s Tin was the sole product. The workings eventually reached almost 3000 feet in depth, equaling Dolcoath. They stretch from Centenary Street in Camborne to Barncoose.

South Crofty closed, controversially, in 1998 after some 400 years of almost continuous work. The mine still possessed a significant geological resource (on paper) and several tempting exploration targets. However, at closure production had caught up with development. Very little development was undertaken during the final few months. Consequently, the remaining mining reserve (ore immediately available for working) is very small. Very likely this stretches from only days to weeks of production.

In addition the main working lodes of the mine No:4, No:8, Roskear A, B and D had all failed in some manner. The Roskear A had petered out as a structure below 445fm level. Roskear B had hinged in Roskear D. Whilst the very shallow-dipping ore shoots on the Roskear D meant that rapidly decreasing strike lengths of the lode (at increasing distances from the decline turnout) were payable. No:4 and No:8 suffered a similar fate at 445fm and below and the No:8 was non-pay and flattening off in dip rapidly around 445fm, possibly to hinge into the No:4 Lode.

The South Crofty Mine Geology Department had identified a number of known lodes to the northwest of the operating workings. These were non-pay at 360-380fm, but were projected to pass into the economic tin zone around 420fm and below. This was to be the focus of a major phase of exploration to expand the mine’s reserve base. Sadly, the drill crews were the first to be laid off as closure loomed, so the exploration was never started.

The closure left some 2 million tonnes of ore on the books, but this is scattered like buckshot across the length and breadth of the mine. Had South Crofty been kept on care and maintenance the story could have been vastly different. Because of the cost of dewatering, refurbishing a point of access and secondary egress and then laying in new services would make many of these blocks uneconomic even at todays Tin price. There are some identified and potentially large blocks of ground that may provide significant ore resources. Whilst there are varying degrees of confidence about these blocks, they remain only a possibility. Anyone wishing to prove them would have to put up something in the region of £50 million. To dewater the mine and service the drill crews and then fund the exploration program without a cast iron guarantee of success.

It is against this background that the mine was reopened in 2001, by which time it was largely flooded. South Crofty was reopened in September 2001, by Baseresult Ltd, as New Cook’s Kitchen Mine and was officially unabandoned. A section of the workings above adit, on North Tincroft Lode, were (as of October 2003) opened for a couple of years for tourist visits with access from the Tuckingmill Decline, before they ceased when working around the decline was initiated.

In November 2007 a new company, Western United Mines (Baseresult 51%, Galena LLP 49%), was formed to finance further mining operations. New workings, off the Tuckingmill Decline included a crosscut (at the 10 fathom level) driven north, which intersected both Middle Engine Shaft and New Cook’s Kitchen Shaft (for access & ventilation). Then an exploration drive/decline driven west southwest to parallel Dolcoath Main Lode. The drive passed through The Great Crosscourse after being driven through some very challenging ground conditions. A collapse of ground at the intersection with some old workings ran through to surface and had to be plugged with concrete. It was then ramped down (at ~ 1 in 6) below the water table and is just past the 340 m mark from the top of the ramp.
The end of the drive is close to a point beneath Church View Road in Camborne.

Work on the decline was eventually halted when it was found to be surrounded by flooded workings which needed to be de-watered before further progress could be made. In order to drill further diamond drill holes, a horizontal spur level (above water level), from the top of the ramp, was driven parallel with Main Lode to a point below Dolcoath Road in Camborne. A crosscut south intersected an old stope on Dolcoath Main Lode, adjacent to Water Engine Shaft. This was the first time anyone had seen the Dolcoath workings since the mine closed in 1920.

The plan was to eventually recommence the driving of the decline. Then develop a turnout for a new level (the 60 fathom level). This which was planned to run back through Dolcoath Main Lode to Williams Shaft, where a new pumping station was to be situated. Extensive diamond drilling was undertaken, using a DIAMEC drill. A short hole to the south intersected a stope on Chapple’s Lode (Cook’s Kitchen Mine) and a number of long holes drilled north intersected Silver Lode and North Entral Lode (Dolcoath). Also the subeconomic upward extensions of South Crofty’s Dolcoath South Lode (carrying copper and uranium).

Drilling also took place away from South Crofty with a number of holes drilled from surface, for the downward extensions of the lodes in the Seton group of mines, just to the north of Camborne. These mines, working the same set of lodes along strike, were an exploration target for both the Dolcoath and South Crofty companies.

This was the first time they had been drilled since the early 1920’s (the Dolcoath company had put out a long borehole north on the New Roskear 2000 foot level. This reputedly intersected one of the Seton lodes.(carrying rich tin values) Results, however, were disappointing; the ground is highly fractured and no structures were found. It would seem likely the holes passed under the footwall of the lode(s).

With an extensive mineral rights catalogue, WUM technical services contemplated plans to drill targets away from (and as possible long-term alternatives to) South Crofty. Likely candidates included the Basset mines and Wheal Alfred. However, after Wheal Seton those plans appear to have been dropped.

WUM, in partnership with their Canadian backers Celeste Copper Corp, planned to explore the ground between Dolcoath and the Roskear mines to the north. A plan had been settled to dewater Dolcoath Mine to the 60fm level. Then the mineralised walls of the old Dolcoath stopes could be stripped. At the same time damming off South Crofty workings to reduce water flow and pumping costs.

Sadly, these plans were halted in June 2013 when Celeste defaulted on their payments to WUM. The company then went into administration.

The future of South Crofty is currently uncertain. It is not yet known if any buyers or new backers will come forward.

This is a footnote to Nick’s account.
Last year, 2017 has brought new hope to the old Bal. Strongbow Exploration have purchased the South Crofty site. Currently in 2018 a water treatment plant is being planned with a proposal to drain the mine for a feasibility study of the deep levels.

Just how much is left down there is open to speculation. But it would be grand to see the wheels turning again and the mine come back to life. Good luck to all involved.

Roskear Shaft was begun by the Dolcoath Company in 1923. After the closure of Dolcoath Mine in 1921, this was planned to be the focus of the New Dolcoath Mine. The circular, brick-lined, shaft was sunk by shaft sinkers from South Wales. This eventually reached 2000 feet deep by late 1926. Levels at 1700, 1900 and 2000 feet intersected a number of lodes. Some limited stoping was done on the Roskear Complex for Wolfram and Tin. Although some of the lodes showed promise the company ran out of capital and attempts to raise more failed. Operations ceased in December 1929 and the company went into receivership in April 1930.

Many of the lodes found in the 1920’s became very rich in depth. Had they been developed it is likely that Dolcoath would have persisted into the 1990’s and bought out South Crofty rather than the other way around – such is mining!
Once the Dolcoath and Roskear lodes began to be exploited Roskear Shaft became a major (updraught) ventilation shaft with large fans at the collar. Many local people will  remember the plume of warm moist air that rose above the shaft in Winter, visible for miles.

Engine Shaft was one of East Pool’s principal shafts until a major collapse in 1921 rendered it unusable. The shaft is located close to the restored Engine House at Mitchell’s Shaft. This is  currently owned by the National Trust. Mitchell’s Shaft was also partially destroyed in the collapse and was never used again.

The company began a new shaft, Taylor’s Shaft. in the northern part of the sett. The preserved Engine House by Morrison’s supermarket, is also owned by the National Trust. Rich lodes were consequently found at depth that gave it a new lease of life.

After East Pool closed in 1945 the sett was bought by South Crofty Mine. In the late 1980’s exploration beneath the East Pool workings led to the discovery of the North Pool Zone (NPZ). This is a complex replacement/lode/pegmatite series of bodies. These were a major producer of rich tin ore up until the mines closure in 1998.