South Crofty Mine Underground 14: Once again I have tried to group the images of specific miners and location. On several trips I would visit often visit the same place. If the lode was being worked over months it was always interesting to go back and see the progression. Often they had been abandoned and moved onto new ground. In other cases the same pair of miners were still there.

This page is continuing with images of drive and sub-level development along with the use of explosives. 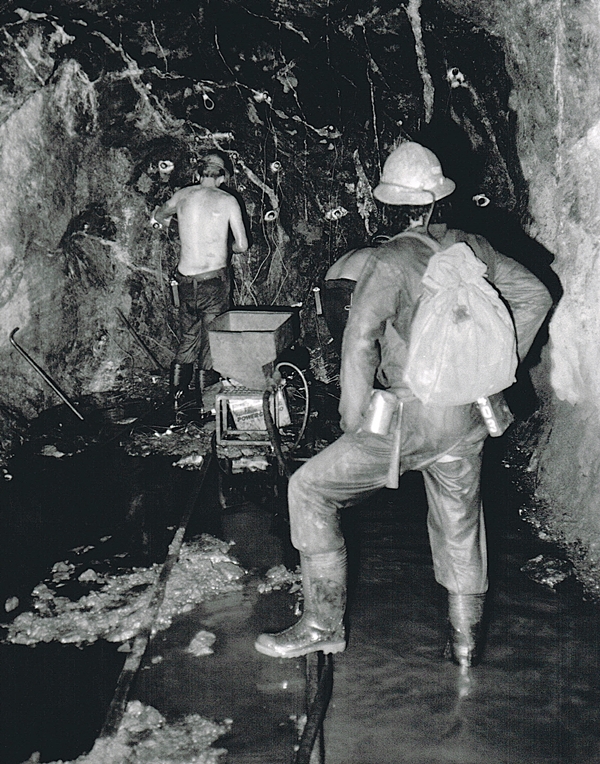 South Crofty Mine Underground 14.1 – Another day and another drive. John Ursoro Mine Geologist watching the drive being primed with explosives. I have no detail on location.  I also like this set, the lighting is very effective. 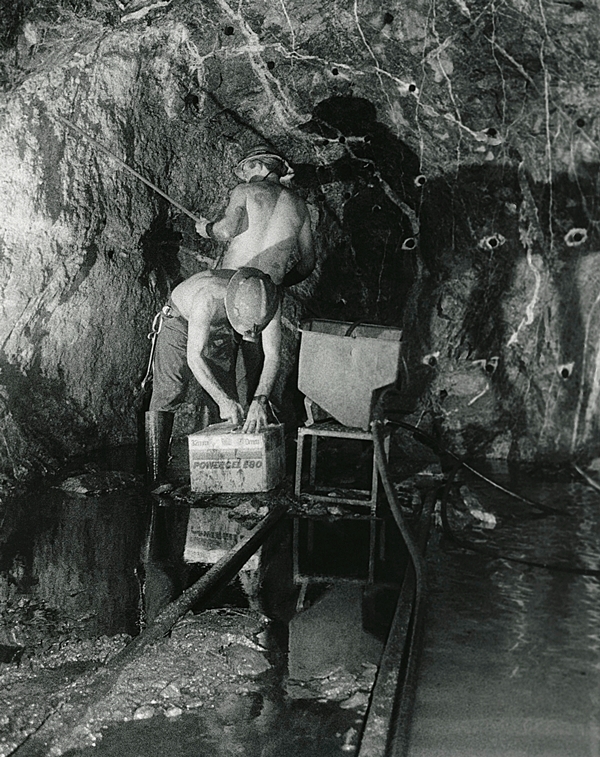 South Crofty Mine Underground 14.2 – In this image the miners having drilled the holes are preparing to prime them with explosive. South Crofty Mine Underground 14.3 – Underground Miner Brian Whittaker with a new batch of fuses for priming the detonators. 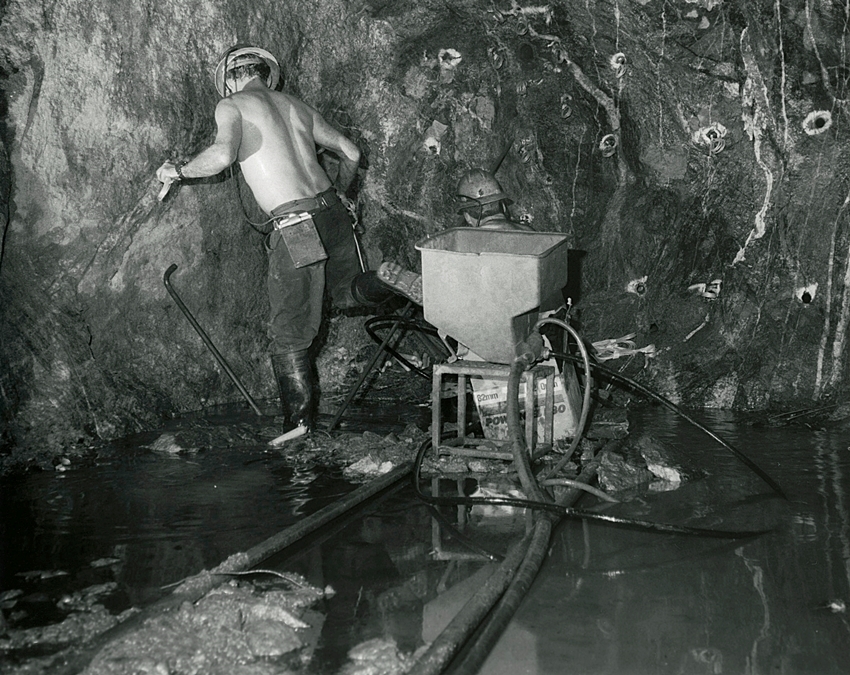 South Crofty Mine Underground 14.4 – Brian Whittaker  is the miner in the image. The container in front of the face was used to force the Anfo explosive into the drilled holes. 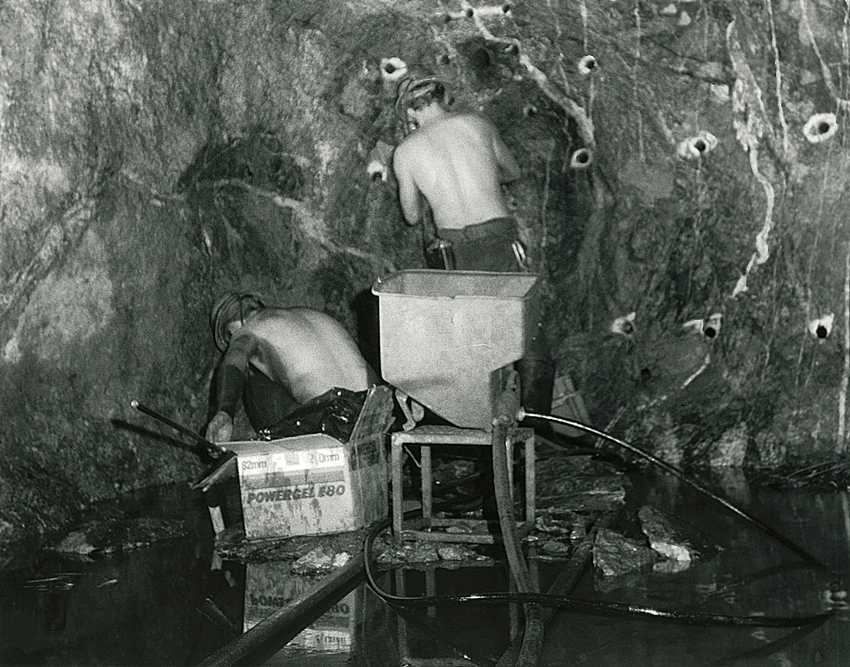 South Crofty Mine Underground 14.5 – Once the Anfo had been forced into the drilled hole each had Powergel explosive placed in the top. The fuse was subsequently placed into this. 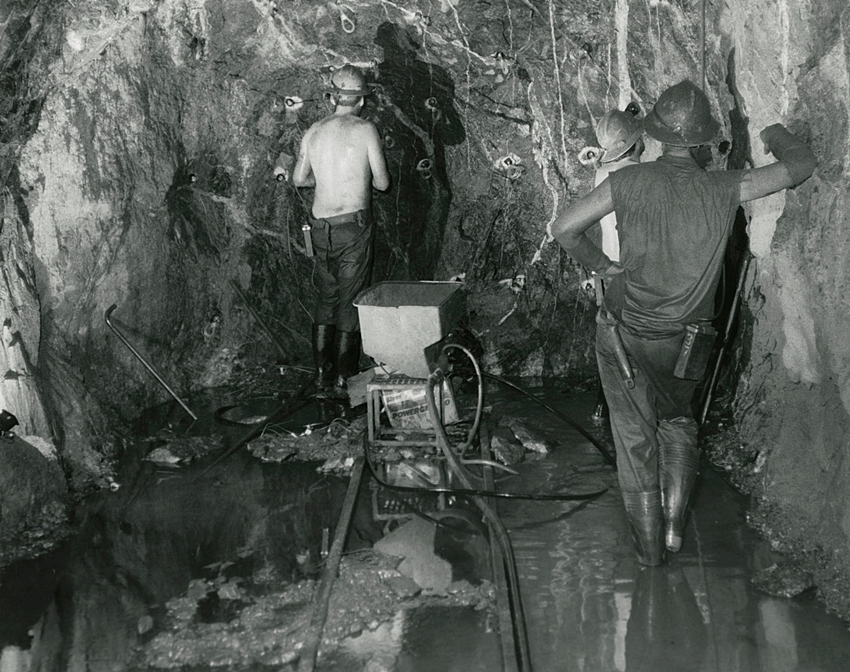 South Crofty Mine Underground 14.6 – It’s amazing how other miners would appear when work was being done. Then watch with interest. 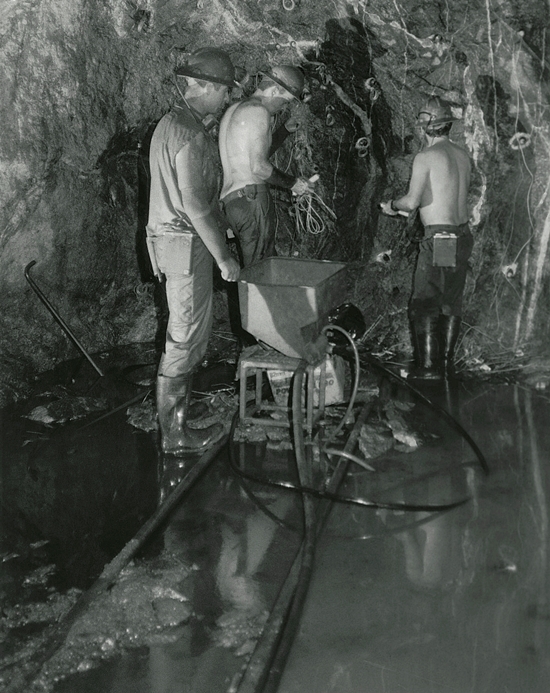 South Crofty Mine Underground 14.7 – The final image of this set shows the miners continuing to prime the drilled holes.

All the remaining images were taken on the Providence Lode Drive on 445 Fathom Level over several visits. South Crofty Mine Underground 14.8 – Brian Whittaker (L) and Neil Hodges (R) drilling the drive. The ladders on the floor were for the drill anchoring. This made drilling slightly easier for the miner.

My friend, Neil Hodges has kindly written a piece for the website. A great account in his own words, an invaluable addition to the page.

I spent some time on several different mining disciplines while underground at South Crofty Mine. However, track development headings was where most time was spent. My workmate at the time was ex Geevor miner Brian Whittaker, we would start our shift at 6am. This was an hour before the main day shift started, in order to get better air pressure. All the underground equipment ran on air and when the mine was in full swing during the day pressure could drop considerably, slowing production. 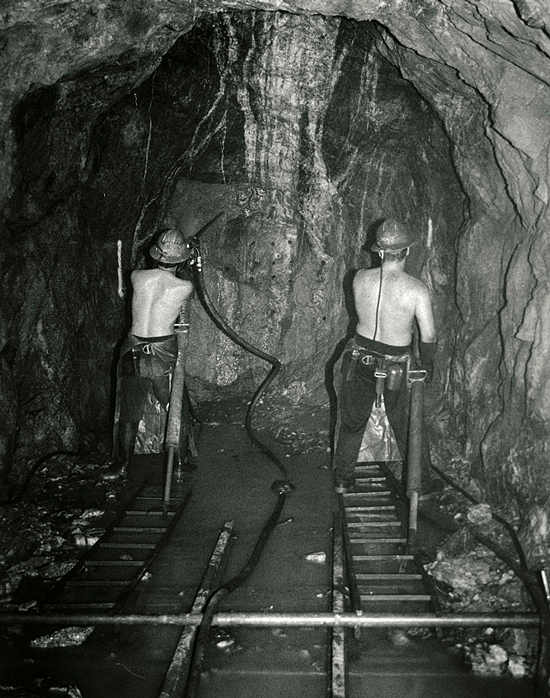 South Crofty Mine Underground 14.9 – My favorite image on this South Crofty Mine page. The Lode of tin they are following can be seen in the face along with the pattern of drill holes in the centre. The noise from the drills in such a confined space was deafening.

The first task of the shift would be to walk into the end with a pinch bar looking for any loose ground overhead. We would tap the back (the roof of the drive) with the bar as we walked into the end and listened for any hollow sound. This would indicate loose rock which would be barred down before walking on. Once at the muck pile from the previous days blast we would wash the whole area and the pile down with water. This damped the dust and dissolved any blast fumes remaining in the dirt. 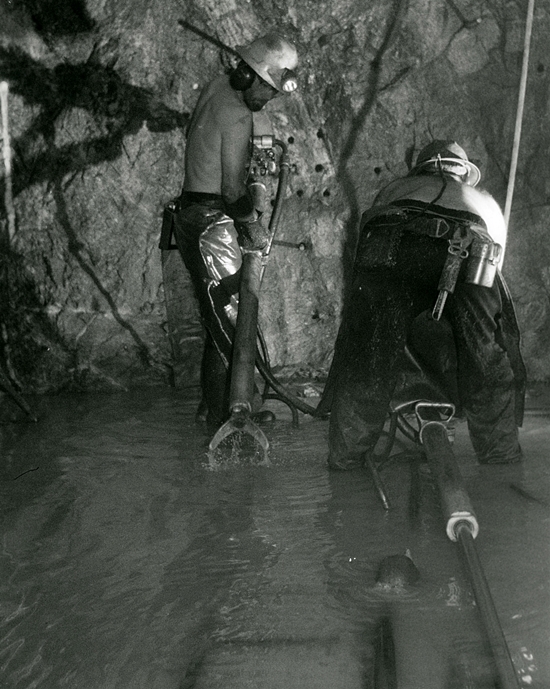 South Crofty Mine Underground 14.10 – Brian Whittaker looking back as he positions the extendable air leg on the drill. The grouping of the drilled holes can be clearly seen.

Standing on the muck pile we would continue to examine and bar down the back, face and sidewalls of the end. Next we would muck out the end. This was normally done with an Atlas Copco LM56 air shovel which had a bucket on a rocker mechanism. The mucker was driven into the pile, filling the bucket, then the bucket was pulled back overhead on a chain to empty into the wagon behind. Once the wagon was full it was either put into a shunt (a short spur of track) to join other full wagons, or taken straight to the tip if it was nearby. 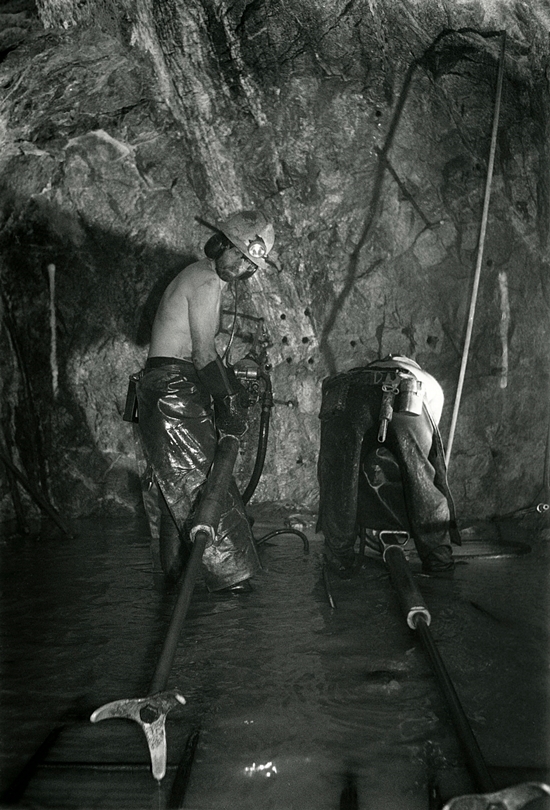 South Crofty Mine Underground 14.11 – The conditions were grim; hot wet and dangerous. For many of the miners the mine meant more to then than just a job.

As mucking progressed the track would come to an end, to advance the track temporarily into the muckpile a “dropset” and “slider” were used. A dropset was a 3 metre length of parallel track welded together and a slider was a 3m length of track welded in such a way that the rails were turned on their side. The slider would fit inside the gauge of the main track. Then it was slid into the muckpile by pushing it with the bucket of the mucker. As the pile was mucked away the slider would be advanced as necessary until it was at its full extent. Then it would then be lifted out and replaced by the dropset which was bolted to the existing main track. The slider was then dropped inside the dropset and advanced into the muckpile as before. 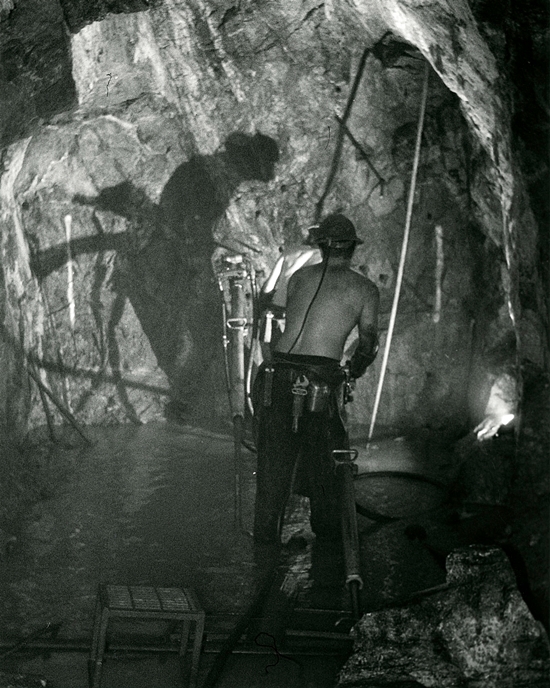 South Crofty Mine Underground 14.12 – I think I took this image standing on a locomotive, the elevation shows the size of the drive.

When the end was mucked out permanent track was laid if necessary along with services. These consisted of 4inch air pipe and 2inch water pipe sat on steel “L” pegs installed in the sidewall. The next job was to drill the round in the face of the heading. This was done with both miners using pneumatic rock drills with an air leg attachment. At the time I was there we used SIG 24k or 29k machines but prior to this Holman Silver 303 machines were used. 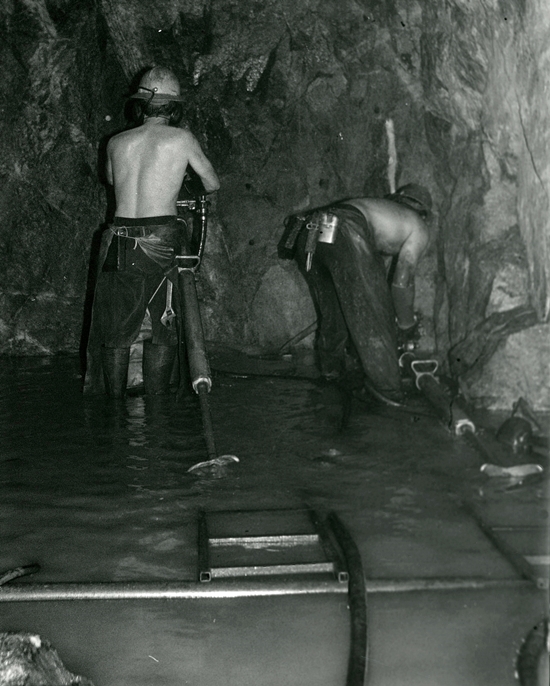 South Crofty Mine Underground 14.13 – In this environment with high heat and humidity the cameras really did not last very long.

We would collar each others holes on the face before drilling to full depth, typically 6 or 8 feet. A set pattern of holes consisting of the cut at the centre, then radiating out from that would be a series of holes in either a box or diamond configuration. This was done until the sides of the heading were reached where profile holes were drilled. 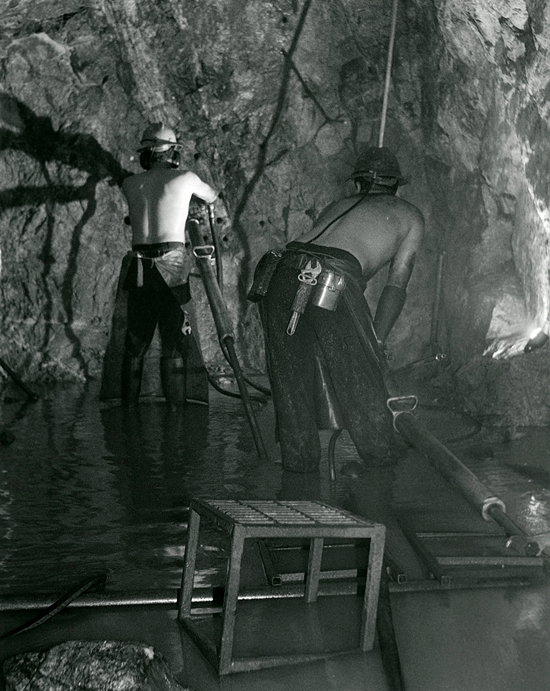 South Crofty Mine Underground 14.14 – It was an amazing experience to see these guys at work. One that I will never forget.

The top profile holes were known as back holes and the ones on the floor were known as lifters. There were typically 36 holes in a regular round and it would take between an hour and a half to two hours depending on the length of holes and the ground conditions. Once drilled the holes were blown clean with compressed air before being charged with explosive. 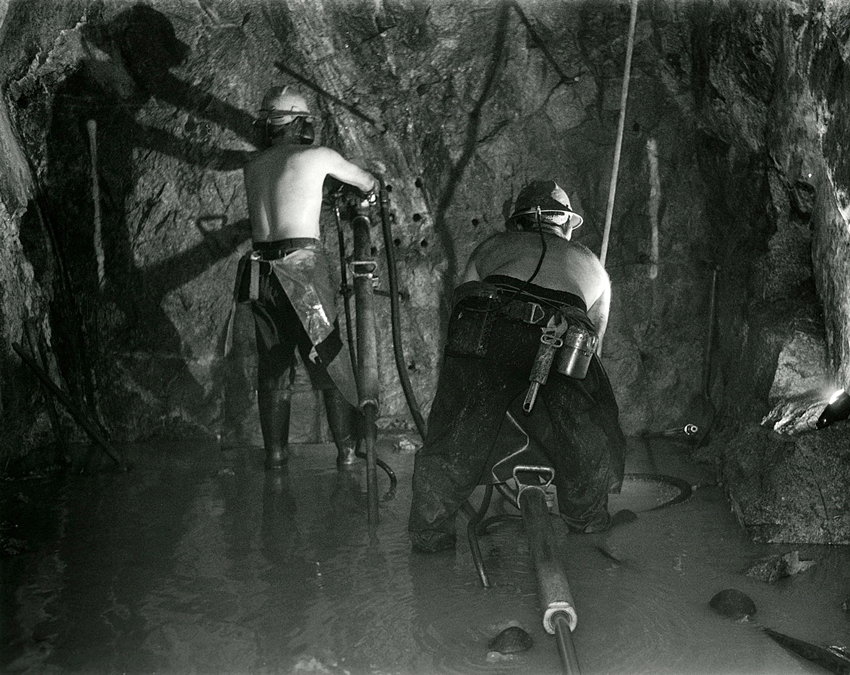 South Crofty Mine Underground 14.15 – The positioning of the flashgun on the right has produced some very effective shadowing on the opposite wall.

The charging process was crucial in that the timing of each blast hole going off determined whether a clean blast would occur. The holes were primed with a stick of dynamite containing the detonator, then further filled to the end with ANFO which was a powdered explosive blown into the hole using a “Penberthy” anfo loader. The “dets” were numbered from zero to about 24. Each number up meant a delay of half a second. Zero would be used in the cut as this was the first part of the face to be blasted. Then at half second intervals the other holes would go off in a radiating pattern with the profile holes going off last. 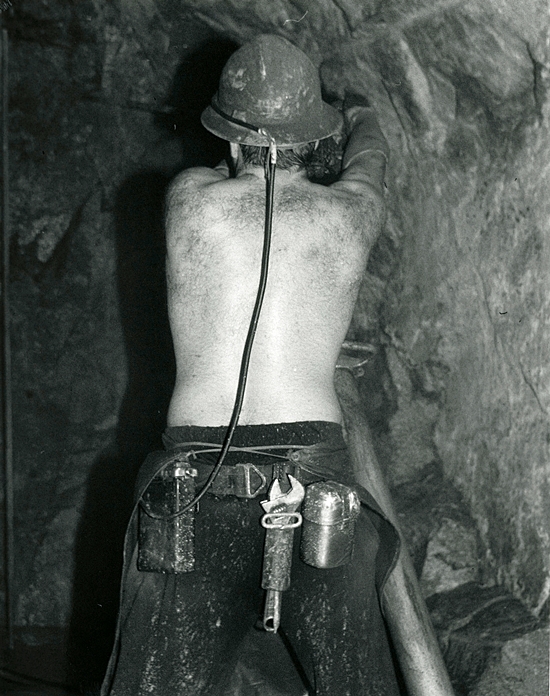 South Crofty Mine Underground 14.16 – Neil Hodges at full stretch drilling a hole near the roof of the drive.

The dets would then be wired together into a circuit of wire ready for blasting. This was obviously done from a safe distance away from the face. The miners used a small device known as a “Bethoven”. This was basically a hand cranked dynamo which you would wind to generate enough charge to send down the wires to set off the explosives. There was always relief at hearing, and feeling, the blast going off knowing you didn’t have to return to the face to sort out any problems (usually a broken wire somewhere).
Basically that’s all there was to it. 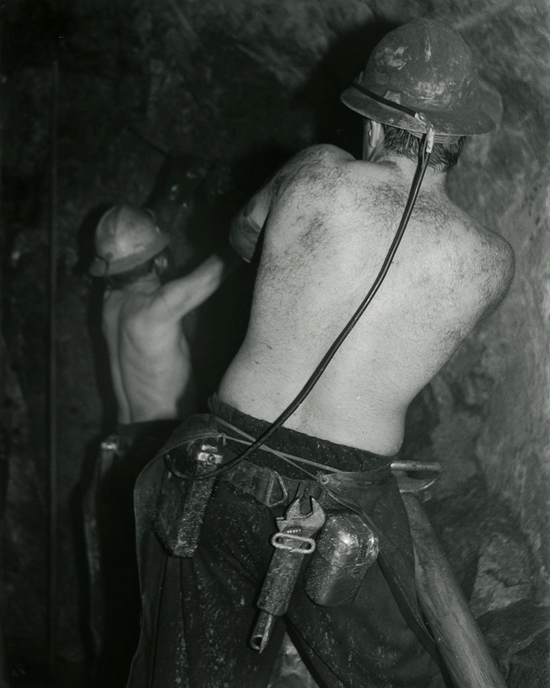 South Crofty Mine Underground 14.17 – Brian Whittaker  assisting Neil in the positioning of the drill.

Then it was time to head back to the shaft for the cage ride to surface. This was a chance to catch up with the other miners and have a bit of a laugh and joke. One common prank was played out during the journey back to surface. The cage at Crofty was a double decker and during the ride up, the miners on the top deck would empty their water bottles down onto the guys on the bottom deck for a laugh. However, the bottom deck was always emptied first. So when the cage got to surface the now soaked miners would get the water hose. This was kept nearby, the miners in the top deck then got a darn good drenching as payback.
This was all taken in good spirits and sums up the camaraderie between the miners.

It was then into the “Dry” for a good shower and scrub before heading home. 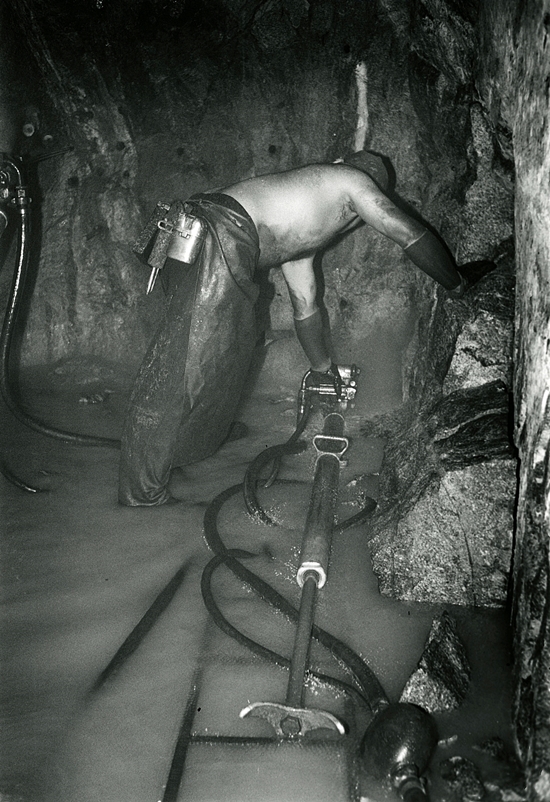 South Crofty Mine Underground 14.18 – A great picture of Neil Hodges, a low hole being drilled. The vibrations in the water from the drill he is using can be seen clearly. 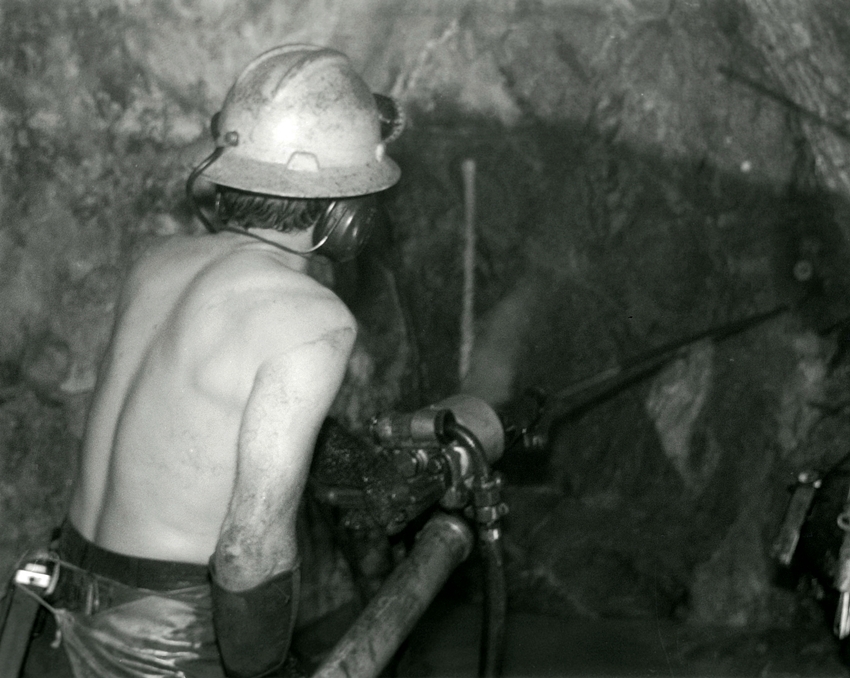 South Crofty Mine Underground 14.19 – The final image of this set is of Brian Whittaker using his drill.

The remaining images are taken on the same lode drive at a different time. Neil Hodges was still there but on this occasion was partnered with Underground Miner Irvin Uren. 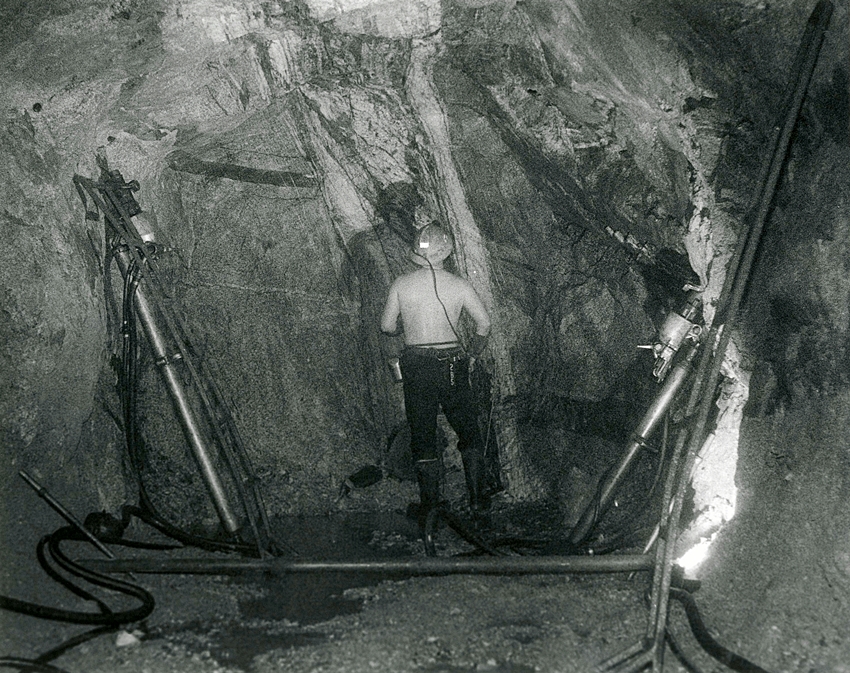 Cornish Mine Images Underground 14.20 – Neil Hodges examining the ore body at the end of the 445 Fathom Providence Lode Drive. Leaning up either side of the miner are SIG-24K Rockdrills.

I asked Neil what is was like to use the drills underground, here is his answer.
With regard to the rock drills it’s very hard to describe to someone what it was like to use. They are a unique piece of machinery. What I can say is that technique and experience played a far bigger part than strength. They were heavy things to move around but the leg helped massively getting it from hole to hole not just for pushing the machine while drilling. The SIG machines were decent tools but I’ve still got a soft spot for the Holman Silver 303 and the 900. They were the most ergonomic and well balanced machines in my opinion. I expect others may disagree but I suppose it’s like your favourite pair of shoes, each to their own. 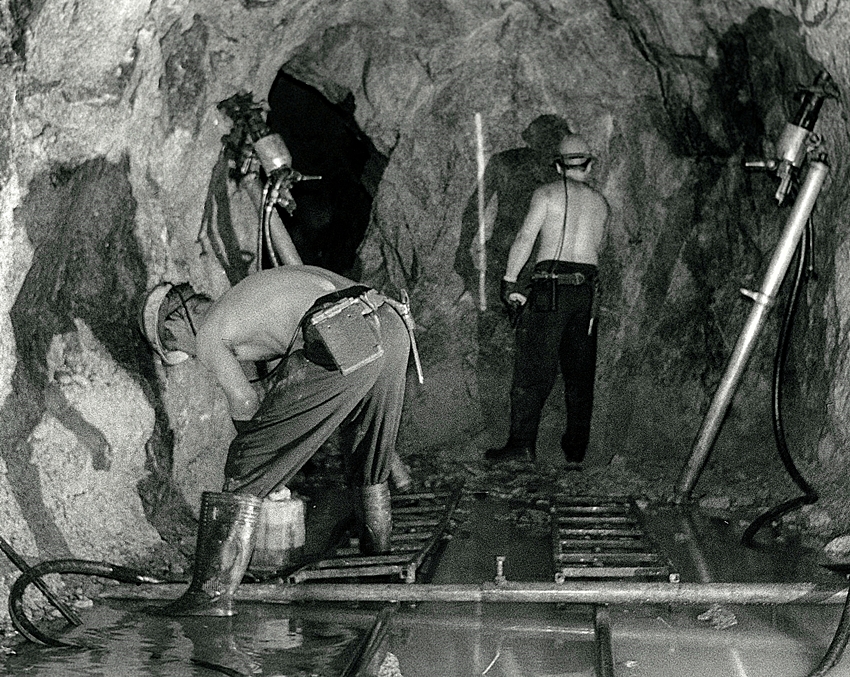 Cornish Mine Images Underground 14.21 – A good image of the two miners at the end of the drive getting ready to start drilling. Cornish Mine Images Underground 14.22 – Miner Irvin Uren prepares his rock drill for use. 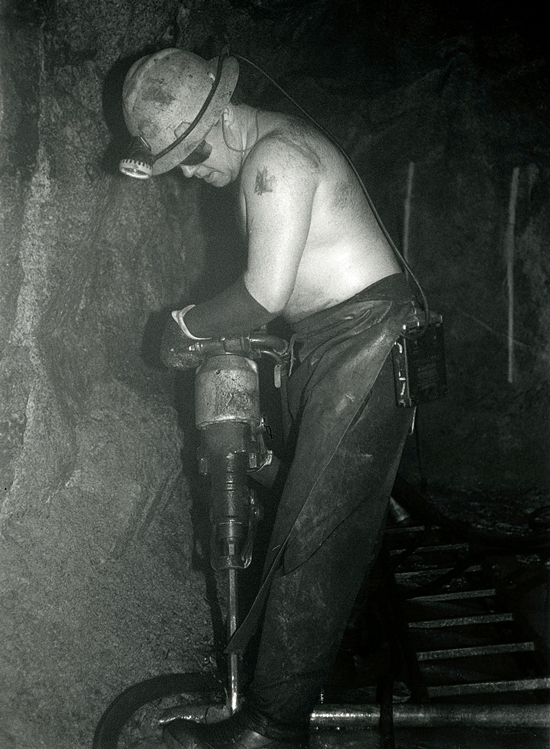 Cornish Mine Images Underground 14.23 – In this image underground miner Neil Hodges is drilling holes in the floor. A ladder was attached, then the telescopic legs of the drills they used would then have a secure place to anchor. 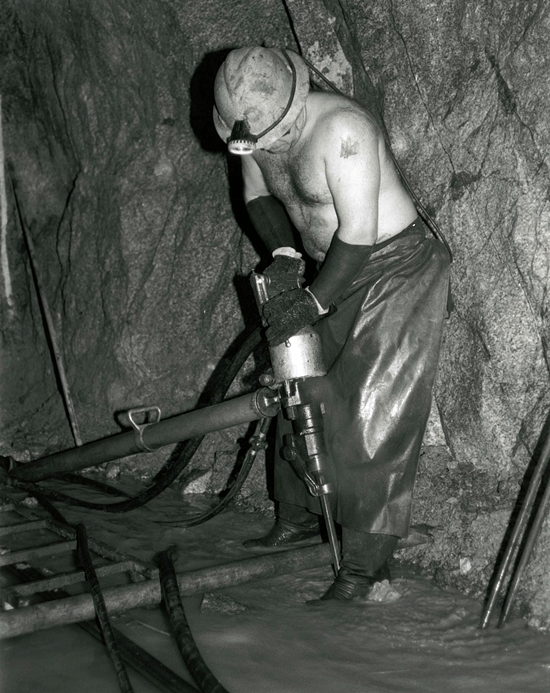 Cornish Mine Images Underground 14.24 – Another image of Neil still drilling the anchor holes. 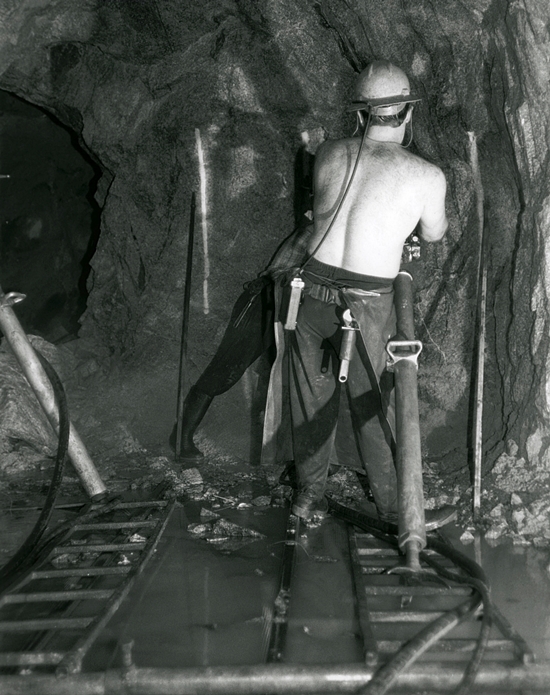 Cornish Mine Images Underground 14.25 – The final image on this page, positioning the drill was often a two handed job.