South Crofty Robinsons 1: The site closed in 1996. The majority of the photographs on the following pages were taken during 1997/8 before the area became totally derelict.

The early years of South Wheal Crofty were based around Palmer’s and Bickford’s Shafts. The shallower Copper deposits were worked out by the 1870’s to be replaced by Tin. Both these shafts were narrow and crooked, as the mine deepened in the search for new Tin zones it was decided a new vertical pumping and haulage shaft was required for the mine to expand and grow. The sinking of Robinson’s Shaft commenced in 1901, the engine house building started two years later.

By 1906 the engine was at work in its new house with the shaft down to the 190 Fathom level, the mine was renamed to become South Crofty Ltd. The final depth of the shaft here was 628m which was the 380 Fathom Level. The house contains an 80″ Cornish Pumping Engine which was the last to work on a mine in Cornwall. Built in 1854 in Hayle the pump worked until May 1st 1955.
The shaft measures 18ft x 6ft and is divided into three compartments; Man-riding, Haulage, Services and Ladderway section.

By 1993 all man riding was through Cooks Shaft with Robinson’s as secondary access. At 160 Fathom Robs passes into a big open stope – you didn’t see this as the shaft was shuttered, effectively suspended in empty space. It’s actually the junction of two stopes with a ‘tooth’ of rock suspended between the two. The problem was that the tooth was moving, as a precursor to collapse, that would take out the whole shaft – hence the abandonment. If and when (more likely when) the tooth does snap off it will feel like a mini earthquake on the surface.
In 1996 the site was officially closed with the secondary egress transferred to the “New Roskear Shaft”, this had been renovated and equipped with a small winder.

These first images are looking at details around the shaft area. 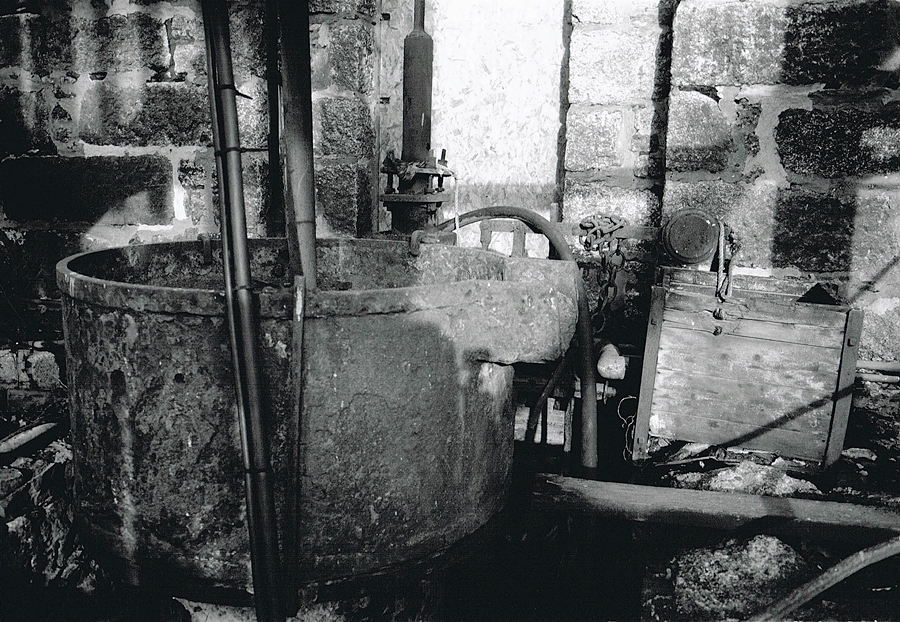 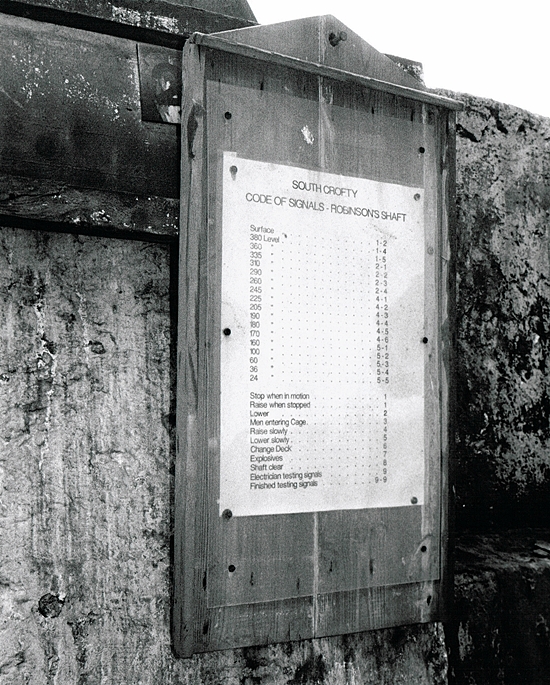 South Crofty Robinsons Shaft 1.3 – The Code of Signals for Robinson’s Shaft. Using these a miner could communicate from underground with the winder driver. 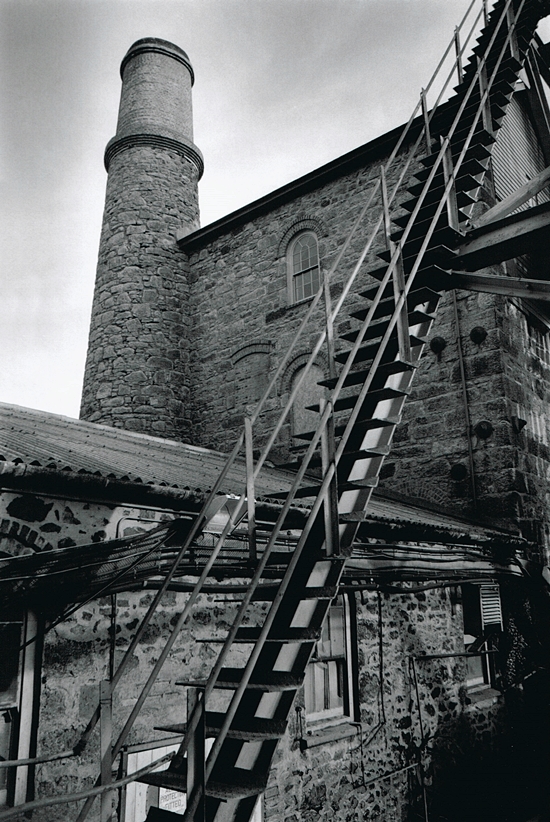 South Crofty Robinsons Shaft 1.4 – A view of the steps leading up the headframe. South Crofty Robinsons Shaft 1.5 – The rear of the Robinson’s Engine House with steps going to the second level of the shaft cages, in the background one of the house windows with fine curved brick arches, not only built to be functional the engine house had to look good and impressive so the mine investors could see how their money had been spent. 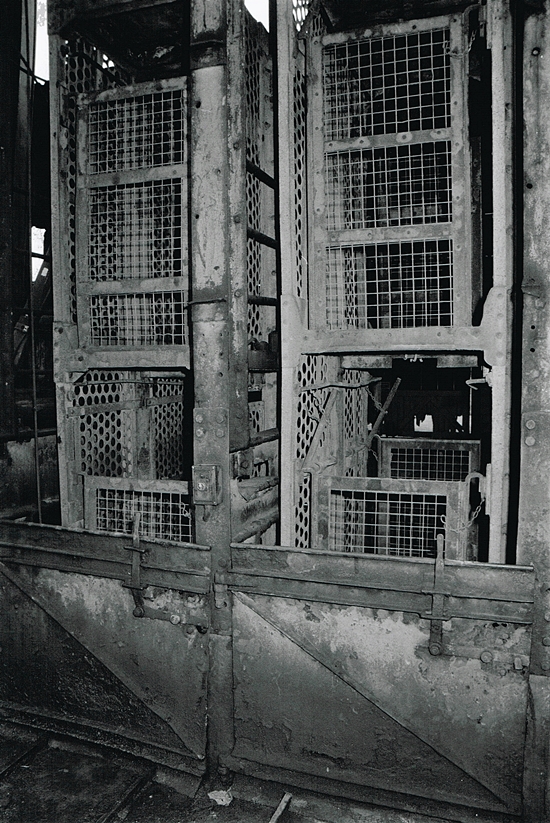 South Crofty Robinsons Shaft 1.6 – The cages as seen from the other side of the shaft. 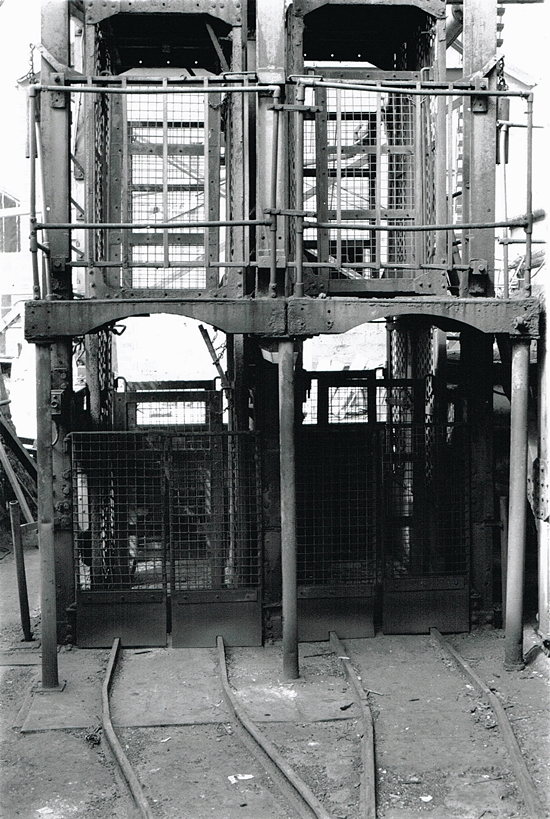 South Crofty Robinsons Shaft 1.7 – The twin level cages at the top of the shaft. The rails were in place so locomotives and wagons could be loaded then lowered into the workings. This is taken looking out of the Shaft bank Shelter. 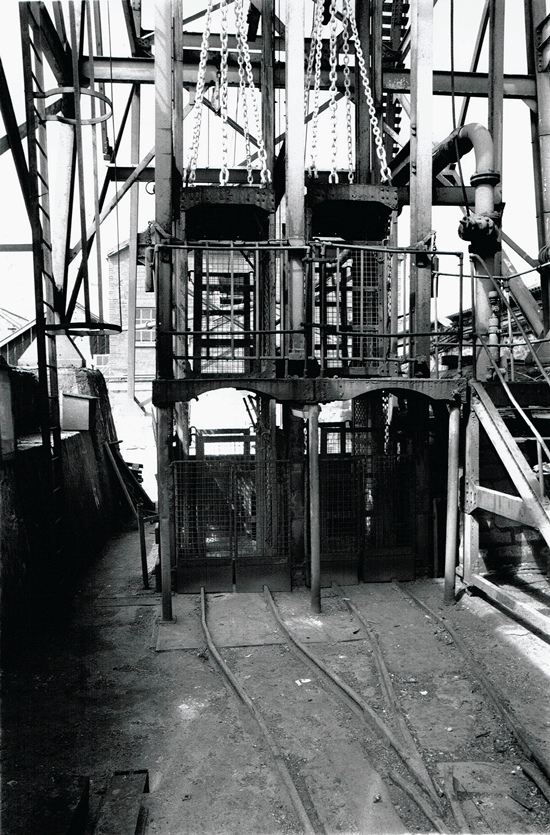 South Crofty Robinsons Shaft 1.8 – The cages again taken a few feet further back. Very interesting to see the chain arrangement which attached the cages to the wire rope. 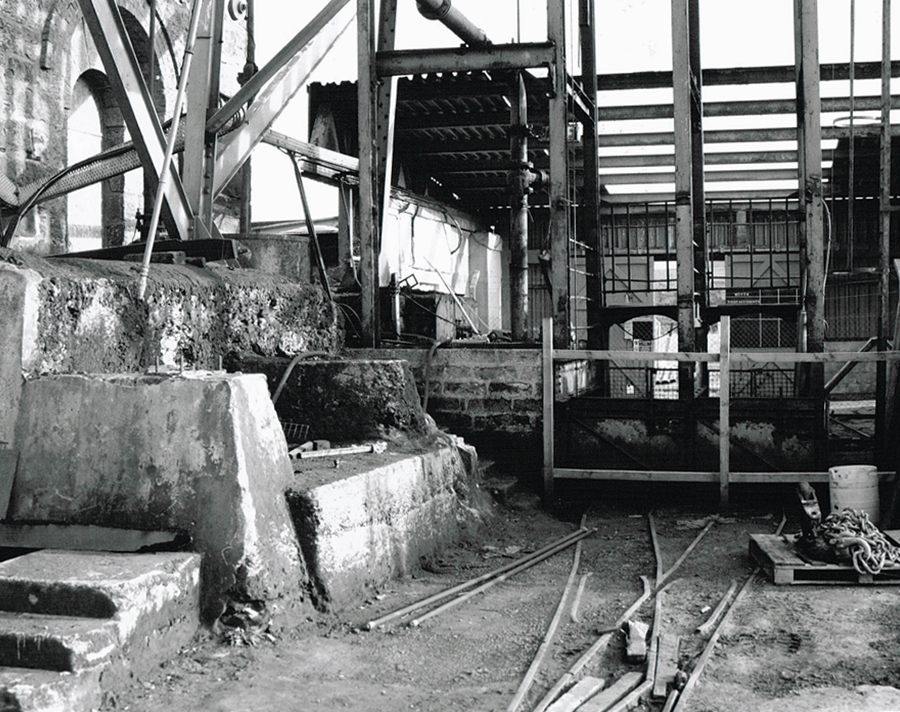 South Crofty Robinsons Shaft 1.9 – This image shows the top of the shaft after the cages had been removed. At the rear of the photograph the Shaftbank shelter is in the process of being dismantled.

The next two images on the page were taken underground at two of the Robinson’s Shaft Stations. 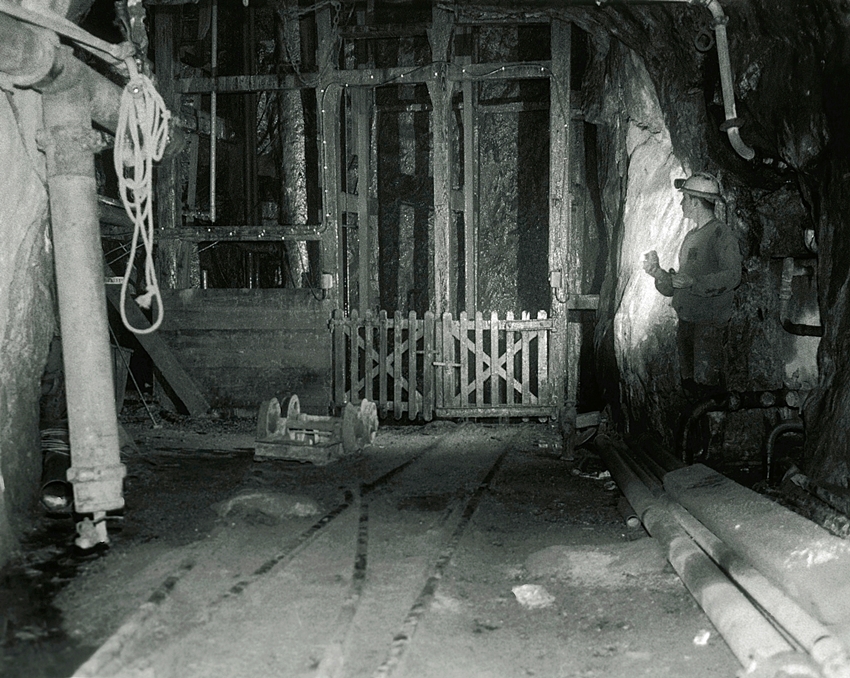 South Crofty 1.11 – Finally the Shaft Station at Robinson’s 380 Fathom Level. The Ladderway going up the shaft can be clearly seen. On this occasion Nick LeBoutillier is holding the slave flash.

Although derelict and vandalised the Robinson’s Complex had a magic of its own, it was a great pleasure for me to walk around and take photographs. I hope the viewer enjoys the photographs on this and the following pages as much as I did when I took them.