Wheal Jane Group is based on the site of Wheal Jane Mine which closed in 1991. The Processing Mill here continued to work processing South Crofty’s ore until the closure in 1998. The mill then lay idle until it was demolished, by 2014 all remains of the plant had been removed from the site.

In January 1992 after the mine had flooded the plug failed on the main mine adit. This caused the release of over 10 million gallons of contaminated mine water to enter the Carnon River and flow to Falmouth Bay. The water was contaminated with Cadmium, Zinc, Arsenic and Iron. Due to the reaction of the water with the salt water of the sea caused the appearance of a red sludge which caused significant environmental problems. Wheal Jane Group 1: This image was taken in 1998. The temporary water treatment plant was operational, but it was still in the early days.

Consequently a temporary treatment plant was constructed by the Environment Agency in 1992. During the years that followed this has evolved into a plant that treats 500 million litres of water every month. The process is quick and simple. Seven electric pumps are suspended in Wheal Jane’s No2 shaft just above the adit level which is at 60m depth. These raise up to 330 litres a second up the shaft to the plant, this is dependent on the level of the water. Wheal Jane Group 1.1: Looking down the concrete circular No2 Shaft at Wheal Jane Mine. The water level is approx 60m down, the suspended pumps which feed the treatment plant can be seen. The guide rails for the cage are still in place, the shaft extended down to 11 level, (1100 feet underground). This was the primary shaft for man riding when the mine was operating. 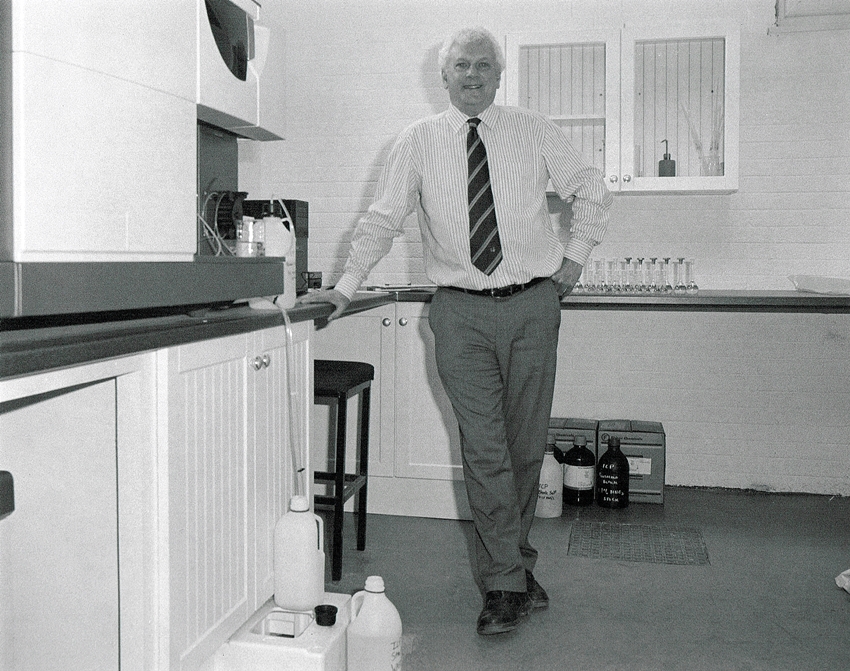 Wheal Jane Group 1.2: Mr Bernard Ballard head of the Group standing beside one of the Sample Analysers in the labs. These labs look at mineral samples from all over the world.

The rest of the mine site is now occupied by the Wheal Jane Group who have a long term vision to covert the site into a sustainable business park. Many of the old mine building have been adapted for use for the seven companies and 120 staff that now work on site. A Solar farm which covers 7.2 acres has recently been built. There are plans for Hydo, Wind and Geothermal plants which will contribute to the reduction of the carbon footprint. There is also a large laboratory which analyses mineral samples from all over the world which was very interesting to see.

My thanks go to Mr Bernard Ballard who arranged for me to see the site, to read more the Group follow this link: http://www.whealjanemasterplan.co.uk/default.aspx 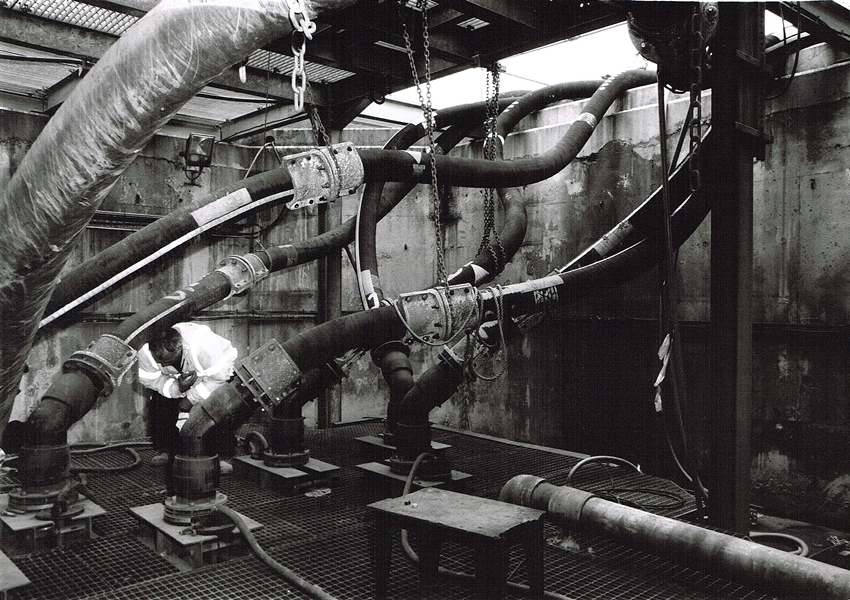 Wheal Jane Group 1.3: These pipes are attached to the pumps suspended in the shaft. 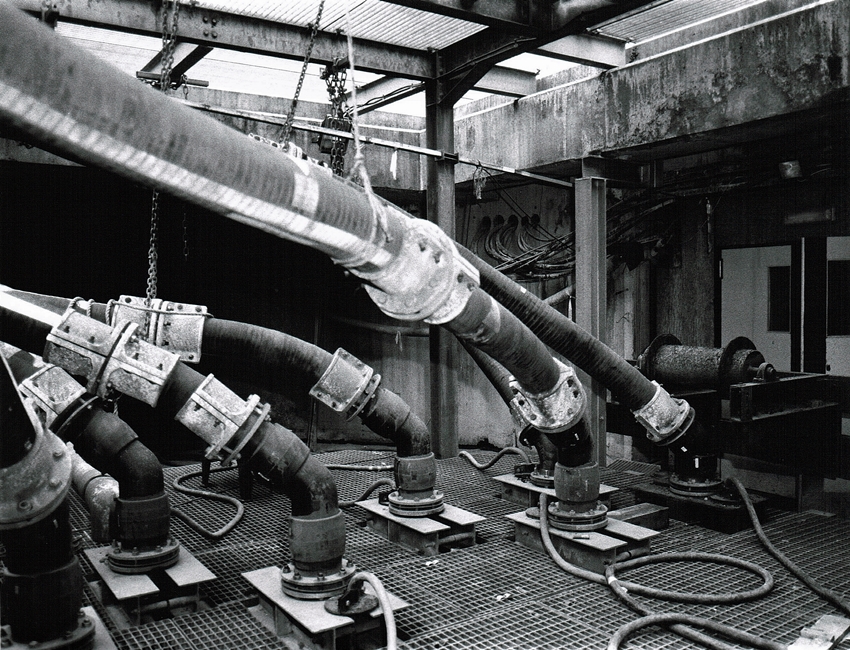 Wheal Jane Group 1.4: The pipes from the other side of the shaft area. 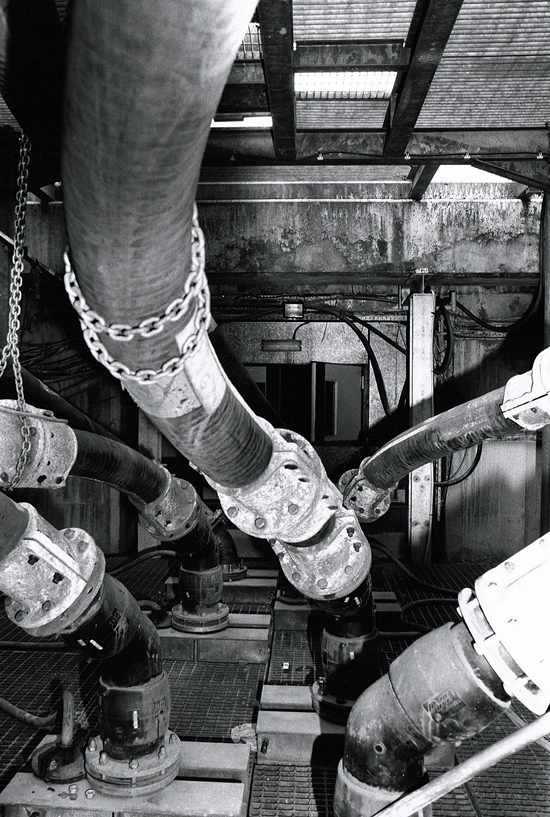 Wheal Jane Group 1.5: A final image of the shaft area. When working the Wheal Jane miners would have entered the cages here to take them underground to work their shifts. 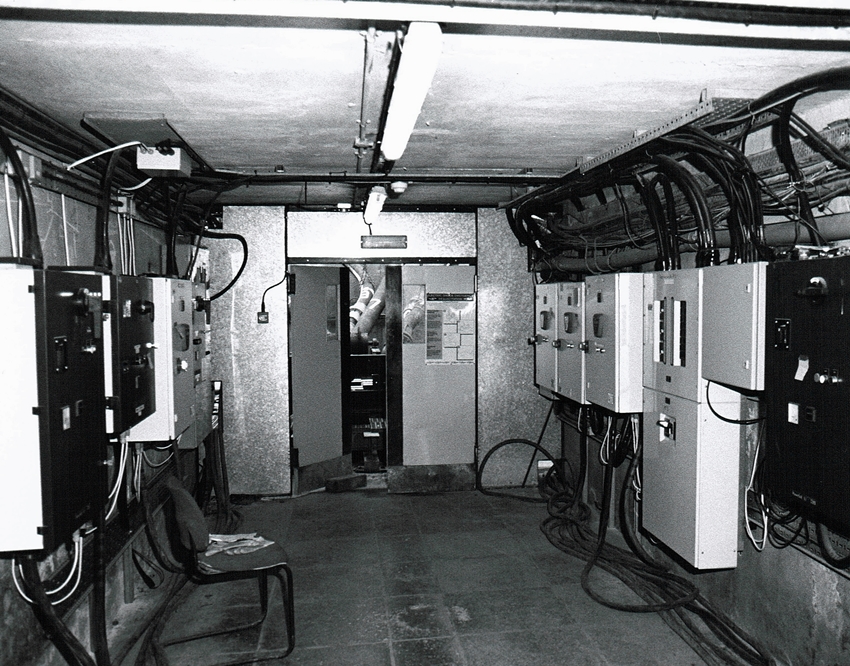 Wheal Jane Group 1.6: The entrance at the end of the tunnel to the shaft station. The electrical switch gear controls the pumps held in the shaft. How many miners walked these passages when the mine was open. 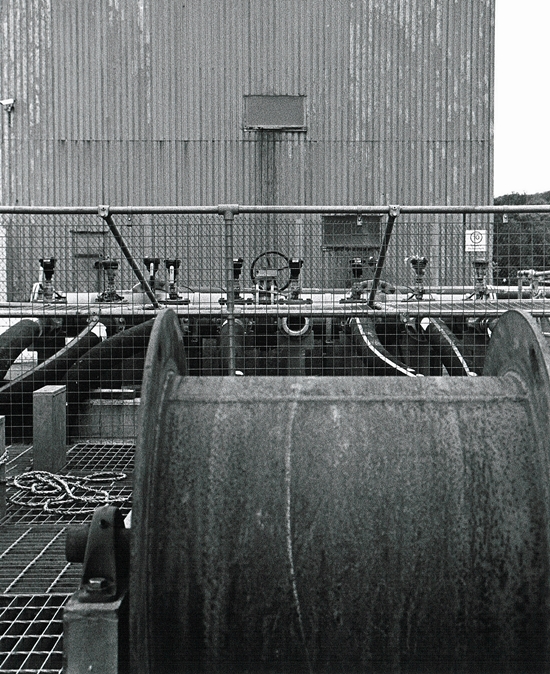 Wheal Jane Group 1.7: The pipes emerging from the shaft station, in the background is the disused winder house for No2 Shaft. 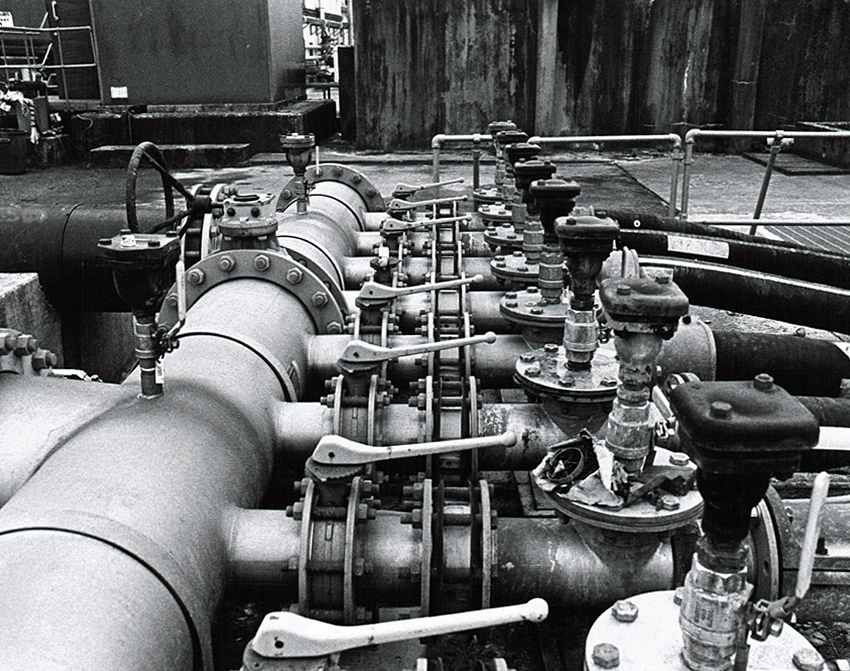 Wheal Jane Group 1.8: These are the valves controlling the flow of water from the pumps in the shaft. Often in wet weather the water level can rise very quickly. 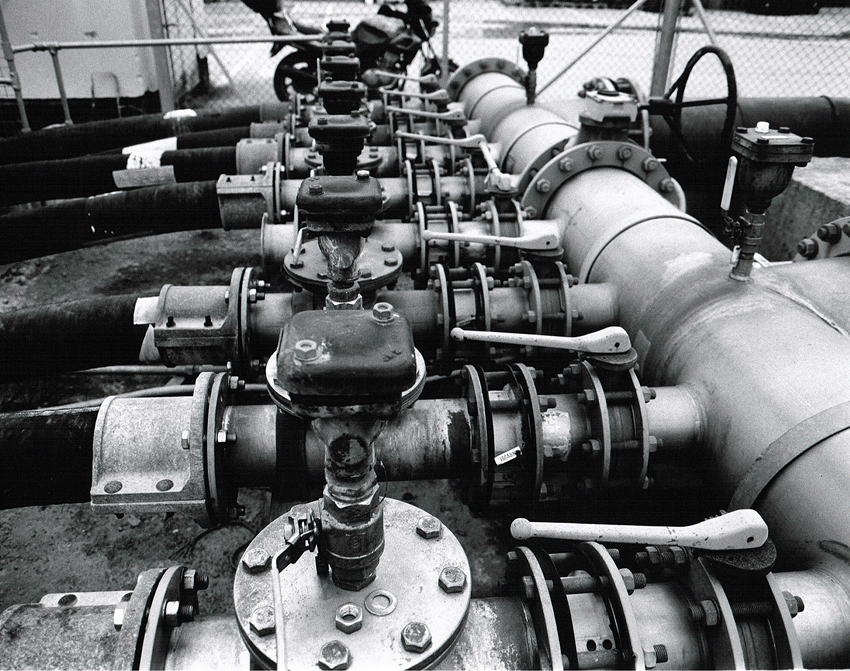 Wheal Jane Group 1.9: The valves as seen from the other side. 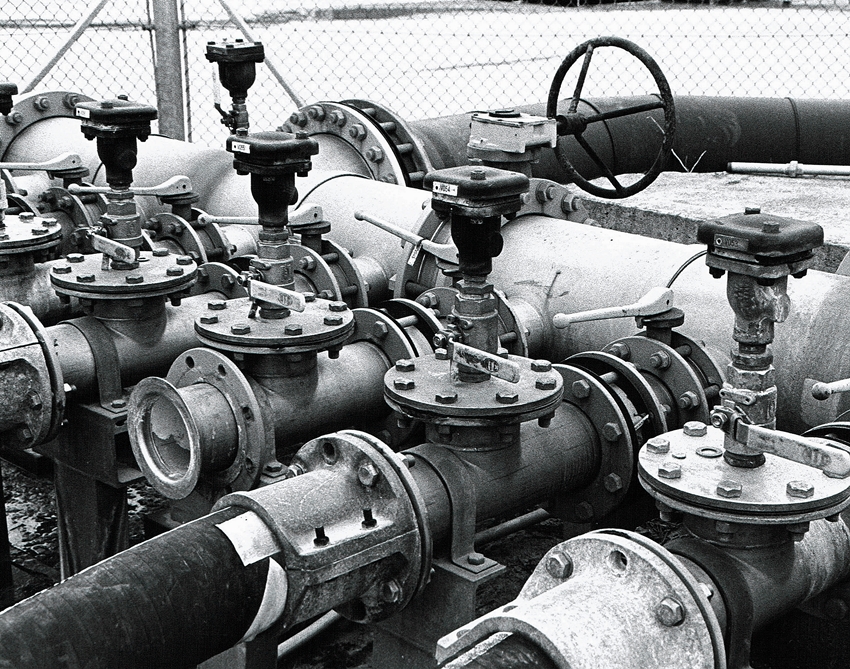 Wheal Jane Group 1.10: Another angle of the valve arrangement. I liked this it was very photogenic. 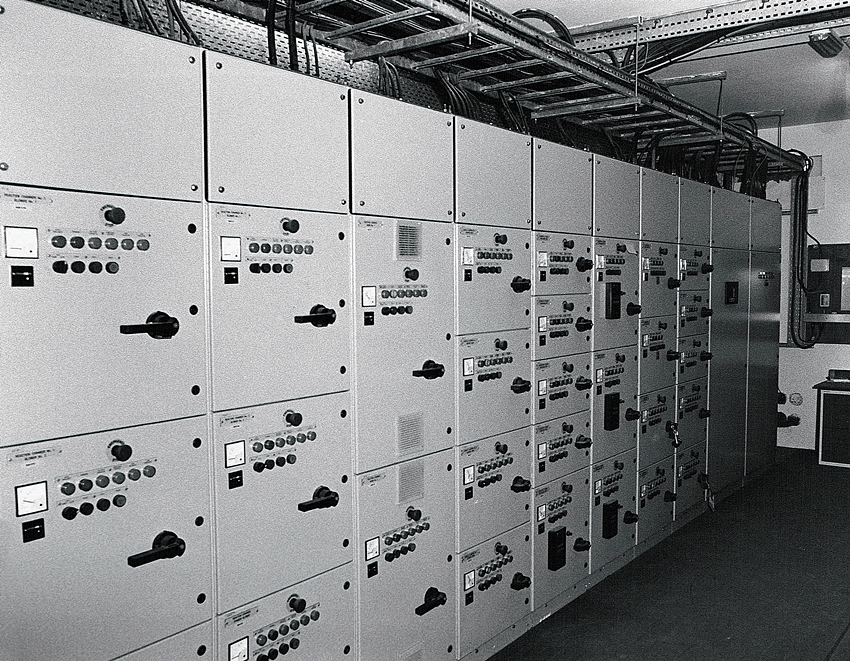 Wheal Jane Group 1.11: A bank of switches in the control room. Most importantly this is a 24hr automated operation as the water level can change quickly.

The following images are taken in and around the treatment area. Firstly, Hydrated Lime is added in the Reaction Chamber to raise the pH of the water and to assist the precipitation of the suspended Iron. This in turn colours the water a deep red. After mixing the water is pumped to the Clarifiers, here a liquid chemical polymer is added which helps bind together all the solids in the water. As a result, these quickly settle at the bottom of the tank, and the now clear water is pumped into Clemows Stream. The remaining sluge is pumped to the Tailings Dam where eventually it will be covered by soil and landscaped. The plant is now run by Veolia Water, my thanks to Nigel who gave up his time to show me around. 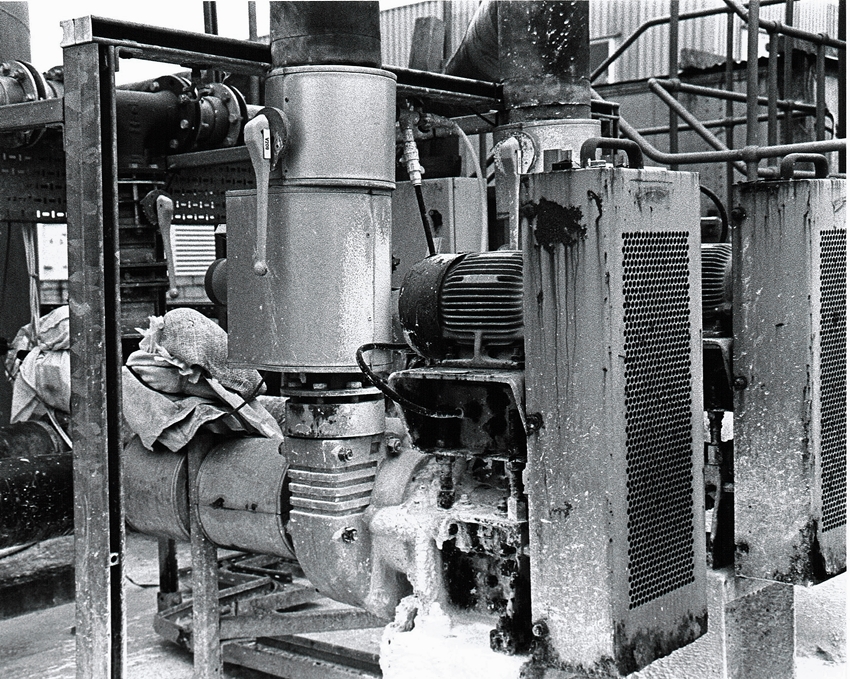 Wheal Jane Group 1.2: The pumps at the base of the Lime Silos.

Wheal Jane Group 1.3: The base of the Lime Silos. 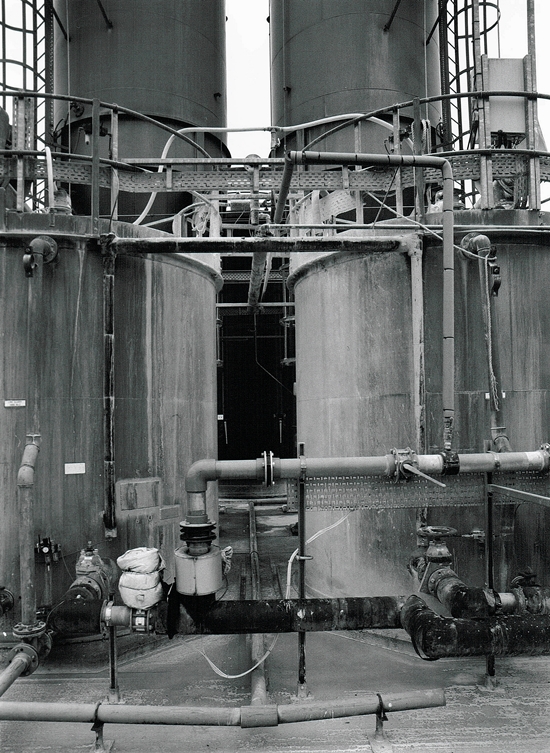 Wheal Jane Group 1.14: The same view from further back. Wheal Jane Group 1.15: This image is of the gantry above the reaction tanks where the mine water is mixed with the polymer.

Wheal Jane Group 1.16: A second image of the tanks, in the foreground is one of the electric pumps to move the mix around. In the background are the lime silos. 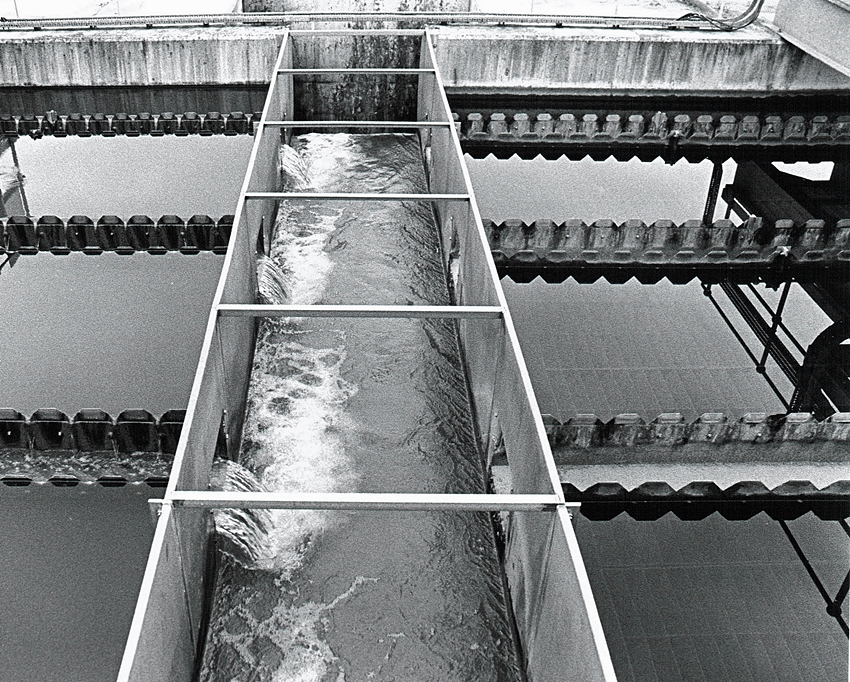 Wheal Jane Group 1.17: After mixing and settling the clean water is removed. The process is remarkably quick, it is totally automated and runs on a 24hr basis. 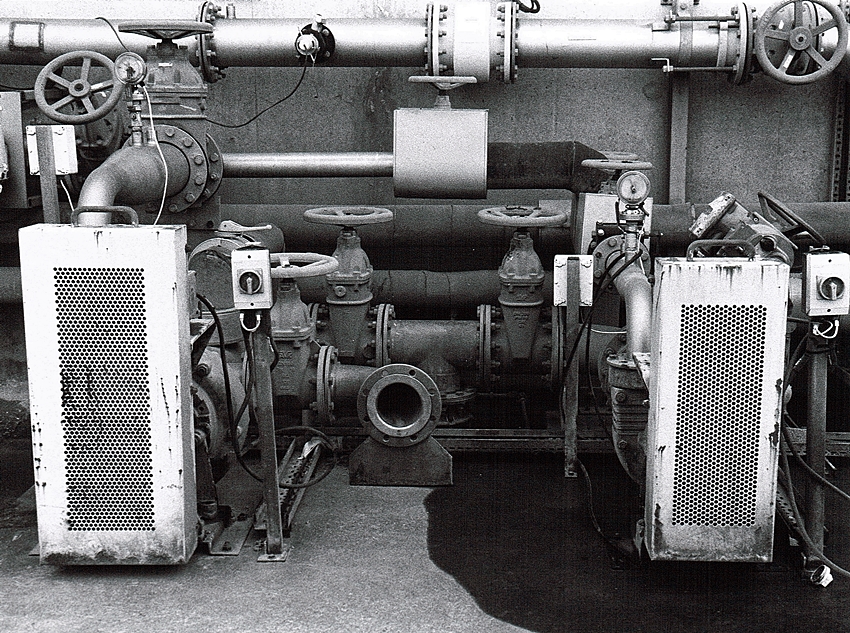 Wheal Jane Group 1.18: More pumps which control the flow of the waste to the tailings dam. Wheal Jane Group 1.19: Large pipes for the removal of the waste products these were pumped to the old mine’s tailings dam.

Wheal Jane Group 1.20: A simple but effective image of valves in the treatment area, the whole place was a photographers paradise. It was just a shame the weather was not playing along. 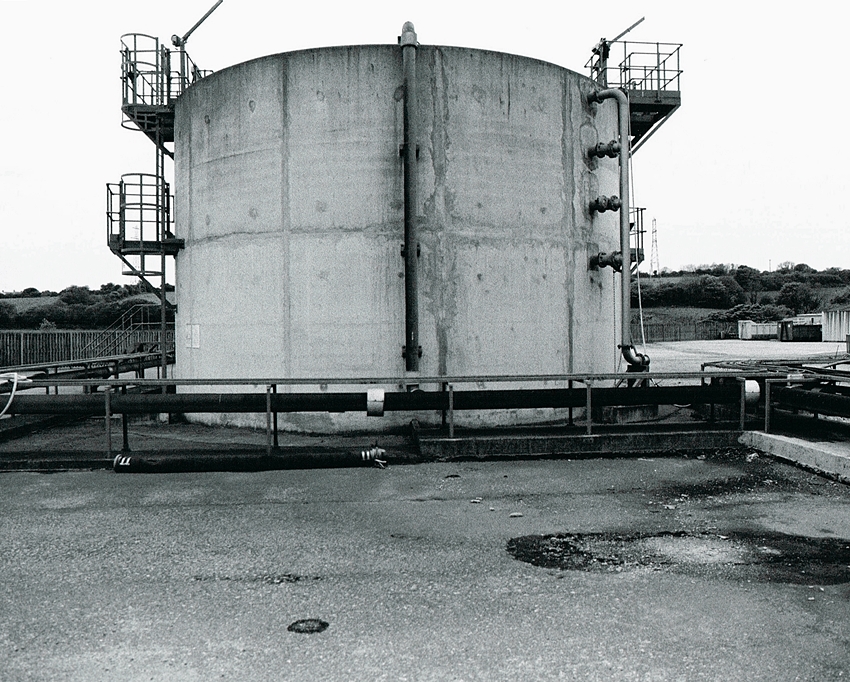 Wheal Jane Group 1.21: One of the storage tanks on the site serving the water treatment plant.

It was sad the day was not better for photography, the next few photographs were taken whilst wandering around the old site.

Wheal Jane Group 1.22: Many of the old buildings on site are being adapted for use, one is the home to the Cornish Wood Turning Group. 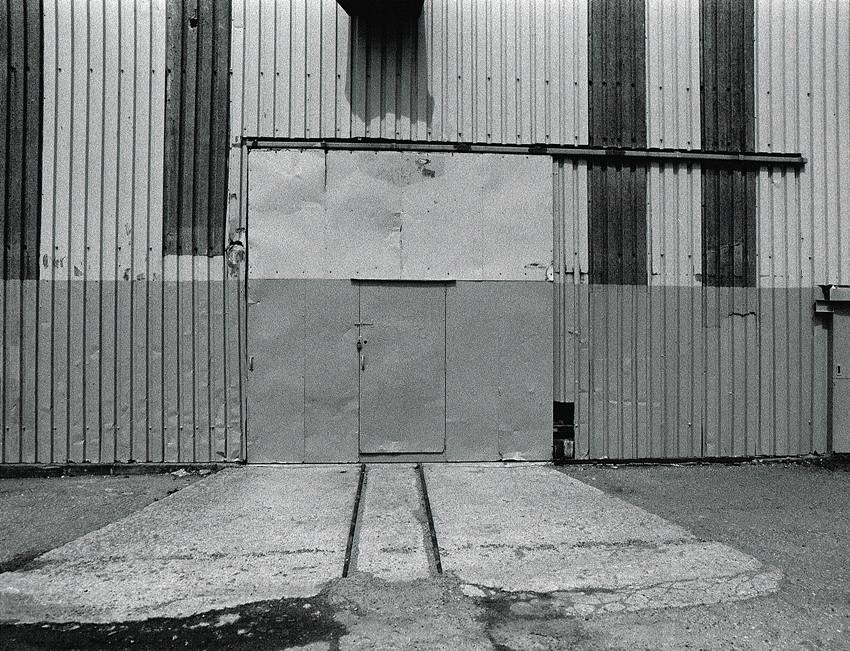 Wheal Jane Group 1.23: The building retain their character, but obviously not their original purpose. This was one of the old winding sheds, old rails can be seen leading to the door. The outside is covered by cladding so often found on Mine buildings. 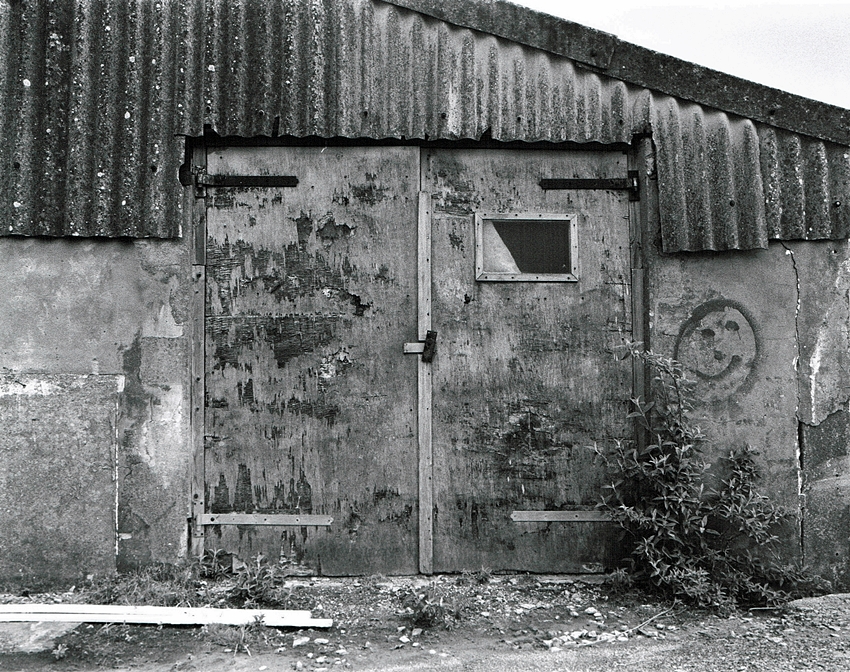 Wheal Jane Group 1.24: One of the old workshops on the site. Many of these had not been cleared out, I just did not have the time for an explore. 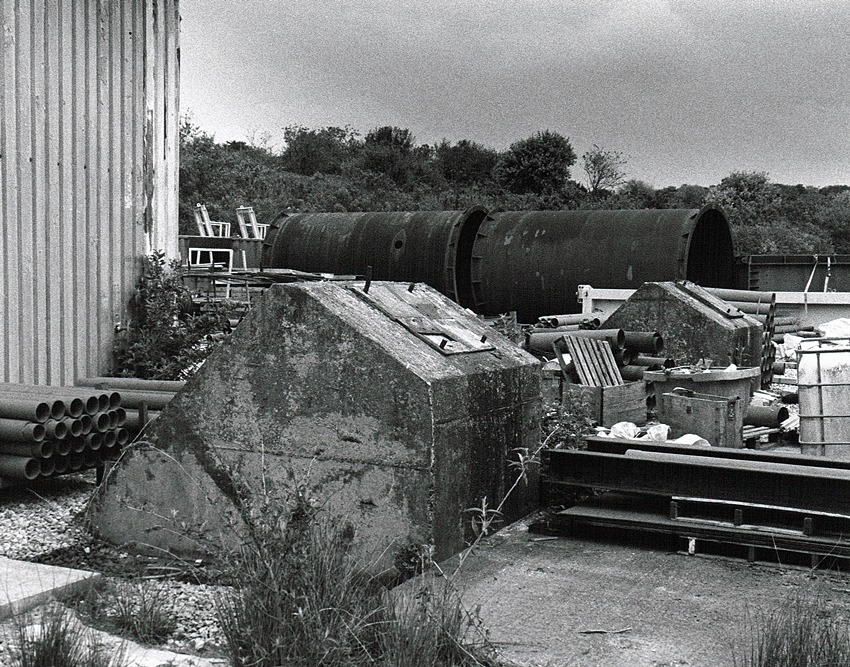 Wheal Jane Group 1.25: These are the foundation blocks for the steel headgear which once towered over Clemow’s Shaft. The shaft itself was still open but covered safely. 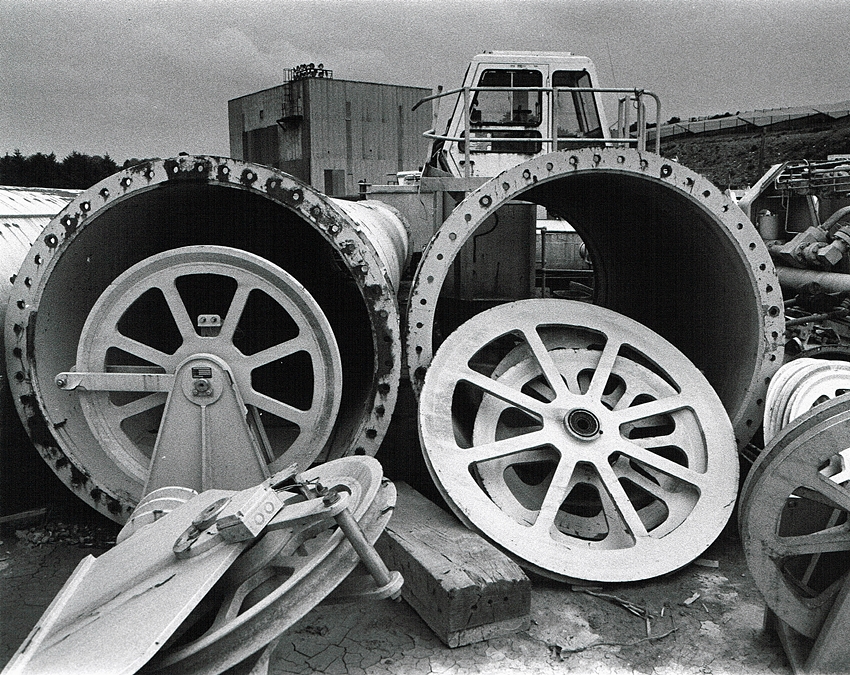 Wheal Jane Group 1.26: Equipment stored in the mine yard makes interesting images. Much of this belonged to a local drilling company who use the area for storage. It was a great place for photography. 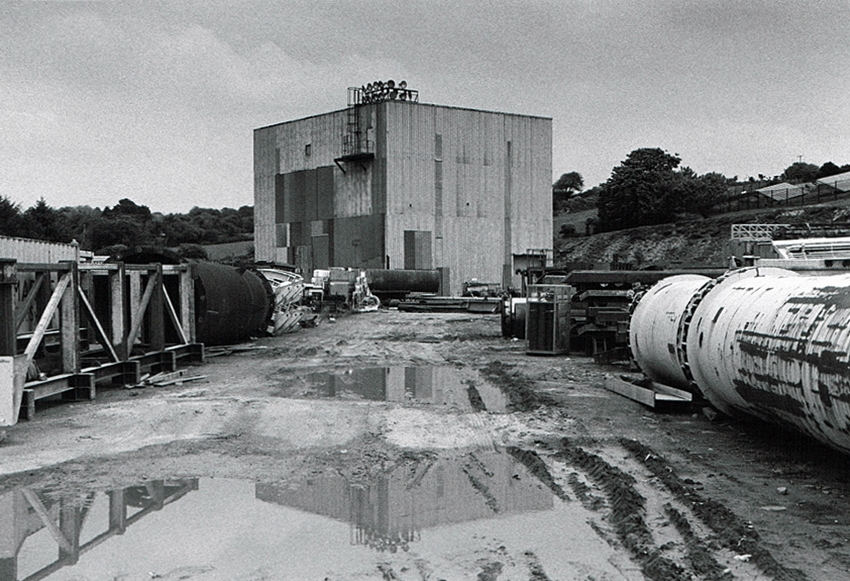 Wheal Jane Group 1.27: The old Primary Crusher House for the treatment plant, This has now been demolished in 2014. It was very sad I could not gain access because it was deemed too dangerous. 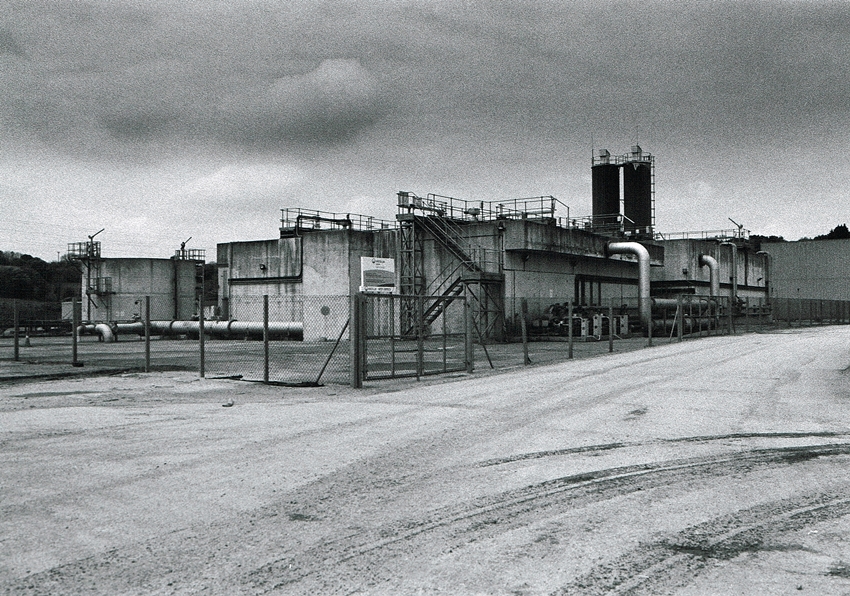 Wheal Jane Group 1.28: A view of the water treatment works from the old mine yard. Its a pity the weather was not with me on this occasion, I hope to return sometime.

Finally, at the end of the tour I was asked if I wanted to see a “melt”. I jumped at the chance, it was only a small furnace but well worth seeing. When the mill was demolished a large amount of Tin concentrate was salvaged. So I was watching South Crofty Tin, which I thought was very fitting. 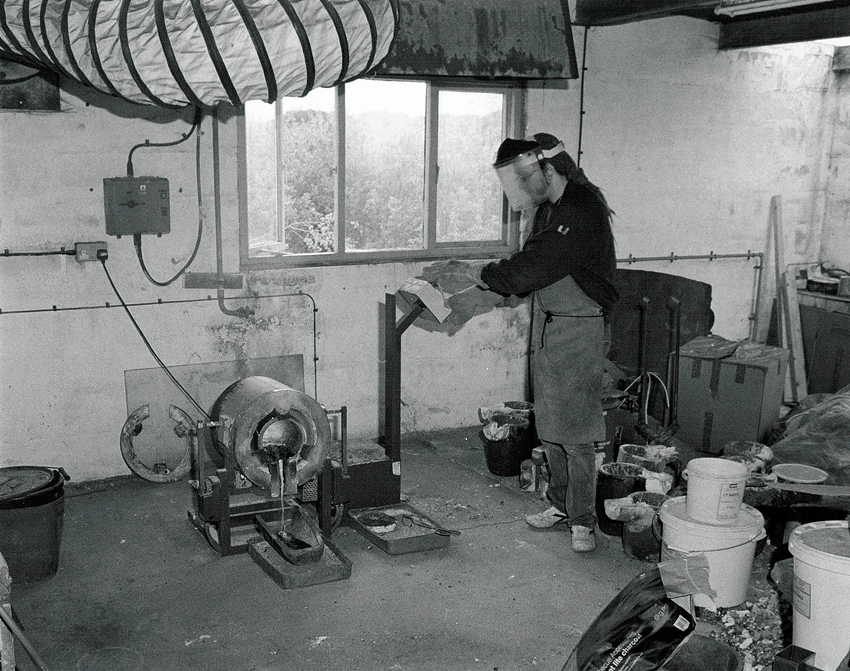 Wheal Jane Group 1.29: This is a rare sight in Cornwall. Tin Smelting on a small scale to provide the material for crafted jewellery made on the site. It was an amazing thing to see. 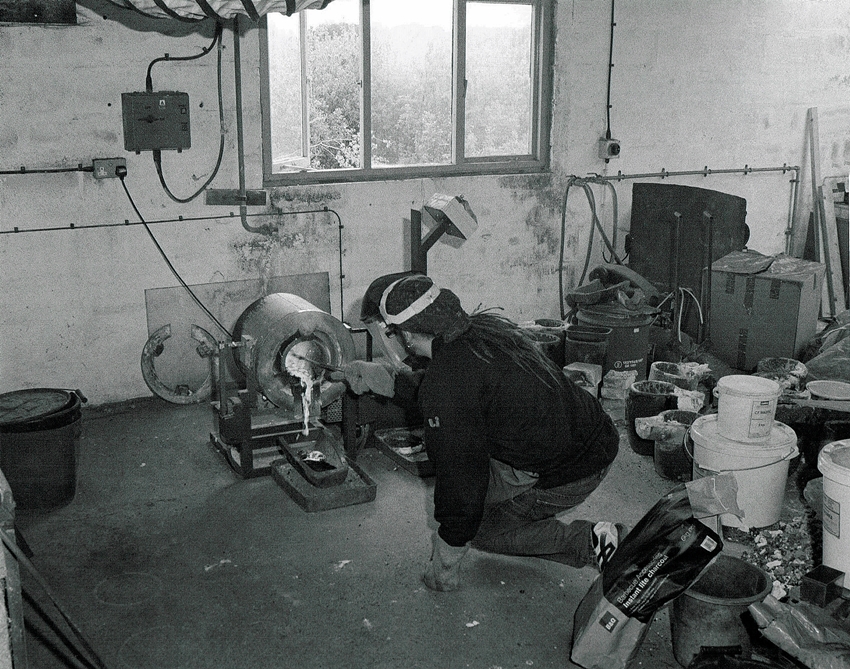 Wheal Jane Groups 1.30: Finally, scraping out the furnace after the successful melt. This goes to make the South Crofty range of Jewellery.