Wheal Jane Mine Gallery 1: The majority of the images on this page were taken during one of my visits to the site in the summer of 1992. The mine had only been officially closed for a short time, I am very sad that I never had the chance to get underground there. My thanks go to Mr Paul Chesterfield who has supplied some extra information on the images. He was an electrician employed at the mine when it was open. 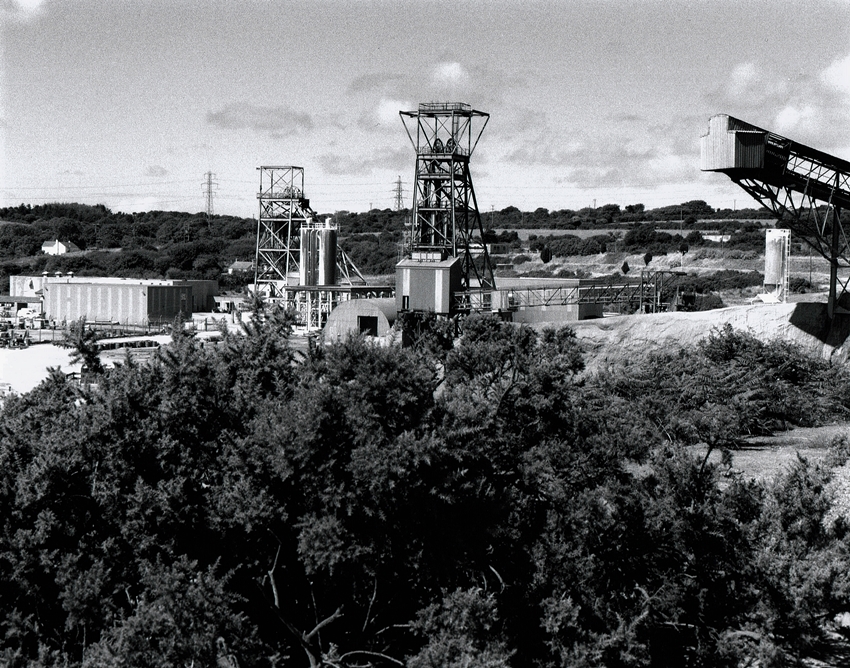 Wheal Jane Mine Gallery 1.1: A general view of the site. To the left of No 2 headframe (rear) is the workshop building. The block was split into 3, with the electricians shop closest, then the mechanical fitting workshop in the middle with the welding and fabrication shop the farthest from the shaft. Wheal Jane Mine Gallery 1.2: It was a sad day when the headframes were removed. The upright tanks infront of the rear No.2 shaft form part of a water treatment plant which was installed after the mine discharged contaminated water into the River Fal in 1992 when the adit plug failed. 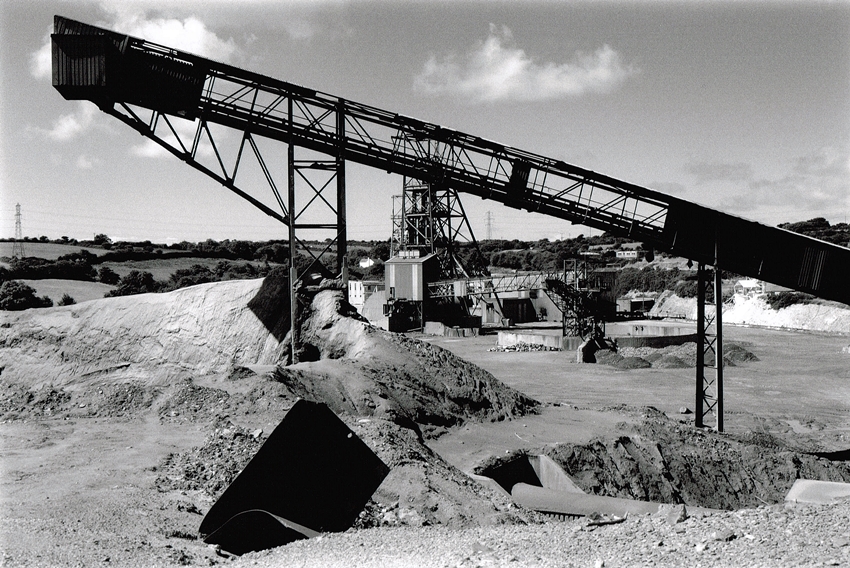 Wheal Jane Mine Gallery 1.3: The conveyor belt, with the shaft headframes behind. In the bottom right of the image is the feed to the processing plant up on the hill, the radial stacker can also be seen. The rocks hoisted up Clemow’s shaft were dropped onto the first conveyor, then on to the radial stacker which was a second conveyor that ran on rails in an arc of approx 180 degrees to deposit the rocks for crushing over a larger area allowing the loader to work one end of the pile whilst the conveyor was still running. 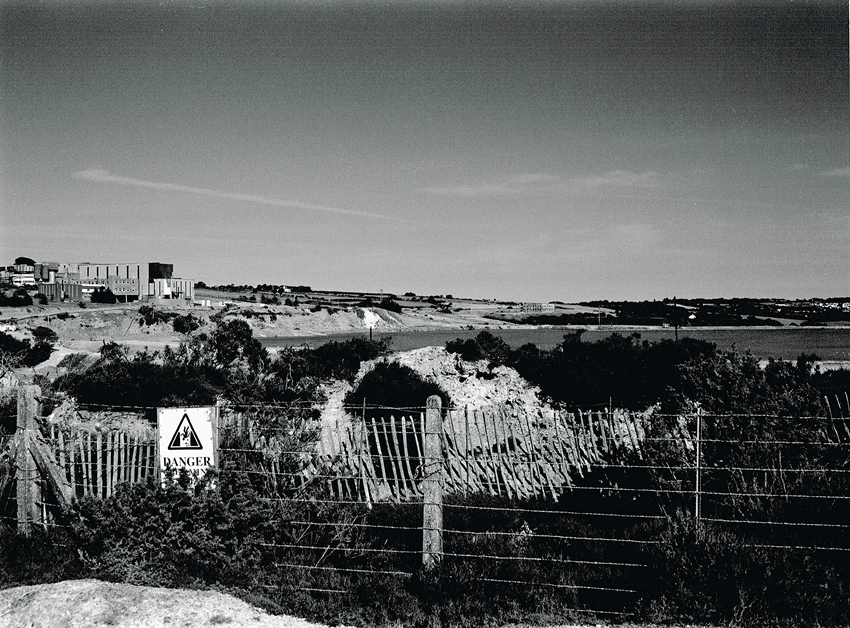 Wheal Jane Mine Gallery 1.4: A view from outside the site, in the foreground is a disused shaft from the earlier workings. In the background it the Tailings Lagoon, this was where the waste material from the processing plant was stored. 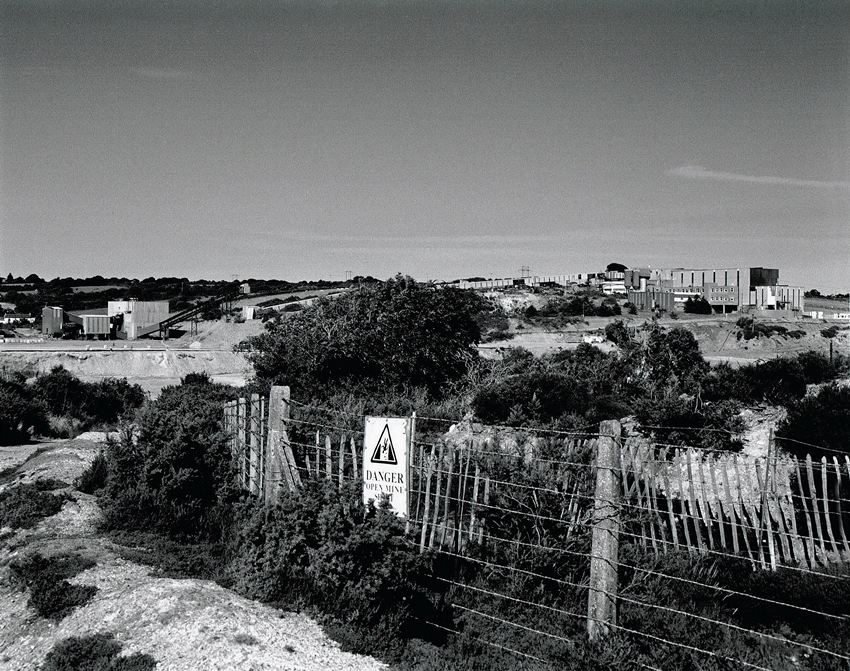 Wheal Jane Mine Gallery 1.5: From the same position as the previous image, on the left is the crusher house, on the right is the mill and mine offices. Wheal Jane Mine Gallery 1.6: A final image from this angle of the mill buildings and offices. 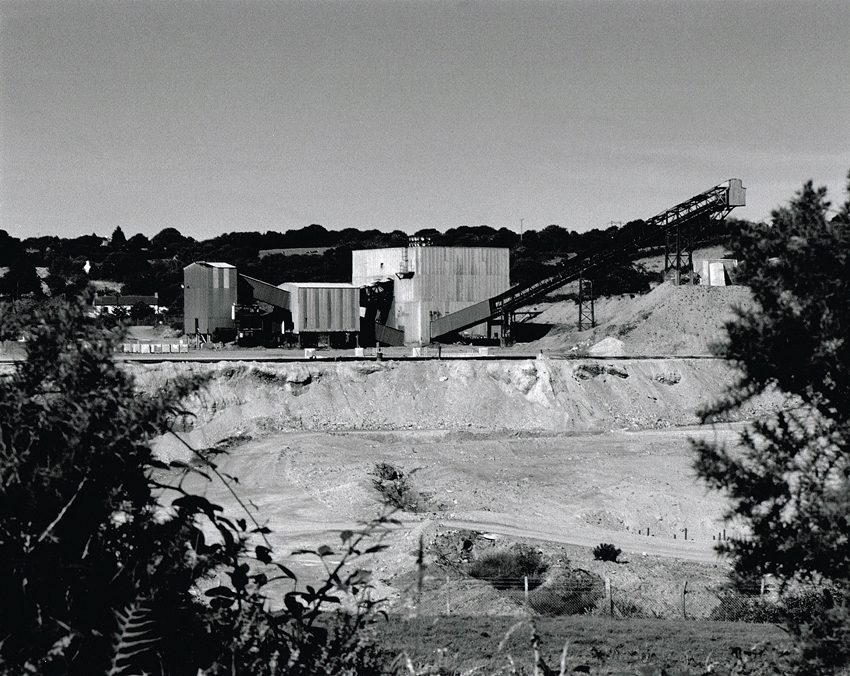 Wheal Jane Mine Gallery 1.7: A view of the crusher house and its associated buildings. Wheal Jane Mine Gallery 1.8: A good image showing some of the Mine Buildings, this gives a good feeling of the desolation of the site. 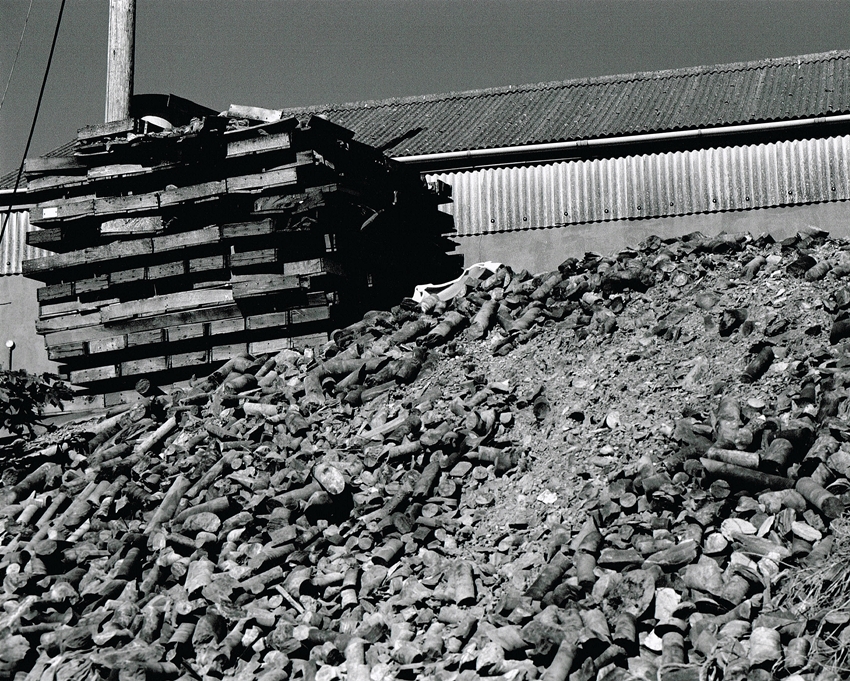 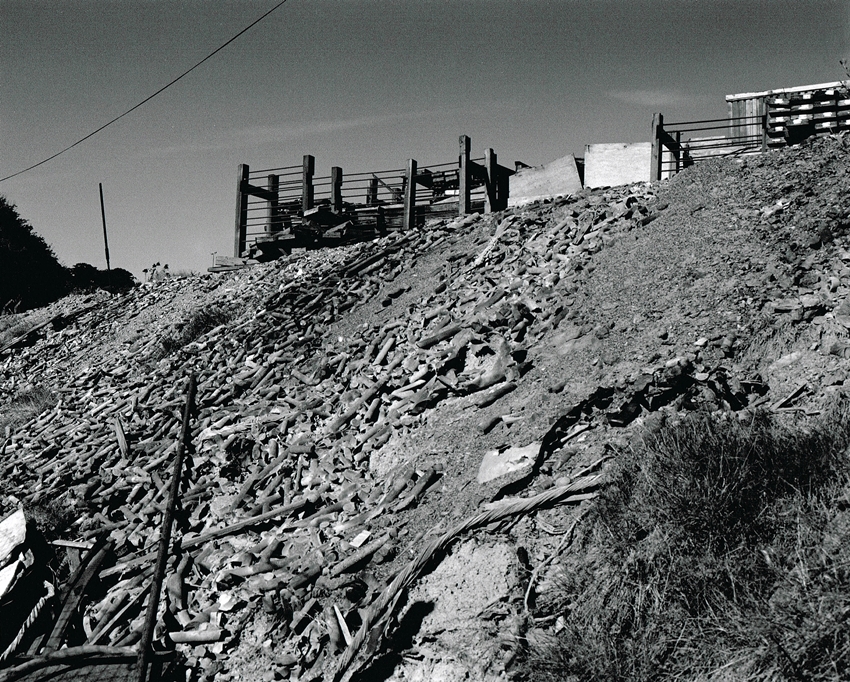 Wheal Jane Mine Gallery 1.10: A second image of the dumped core samples. 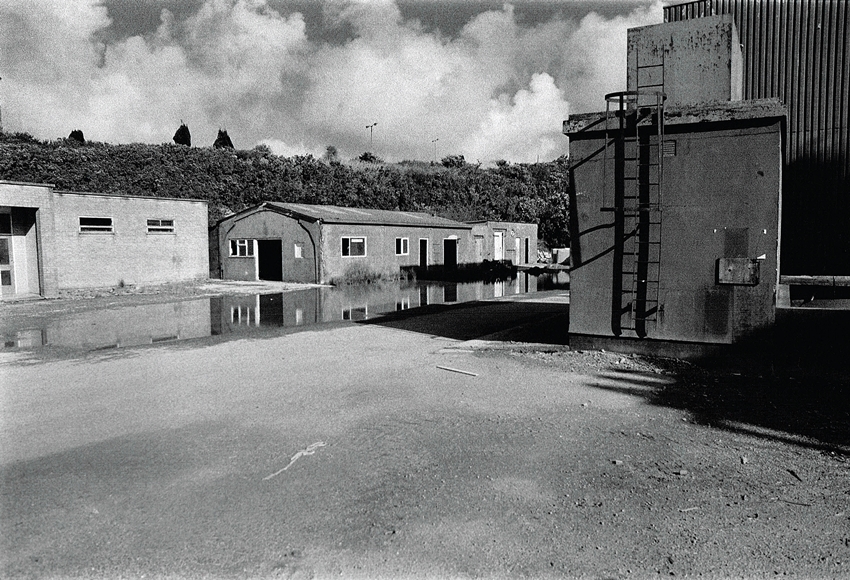 Wheal Jane Mine Gallery 1.11: Some of the buildings on the site. The structure with the shallow pitched roof was the drill shop where the pneumatic drills were overhauled and repaired. Beyond this is the High Voltage substation where the 3300 volt electricity was distributed. Wheal Jane Mine Gallery 1.12: This is taken from where there used to be a headframe looking back to the Winder House on the left of the image. The pipes on the floor are pumping water from underground to be treated to remove the acidic content. 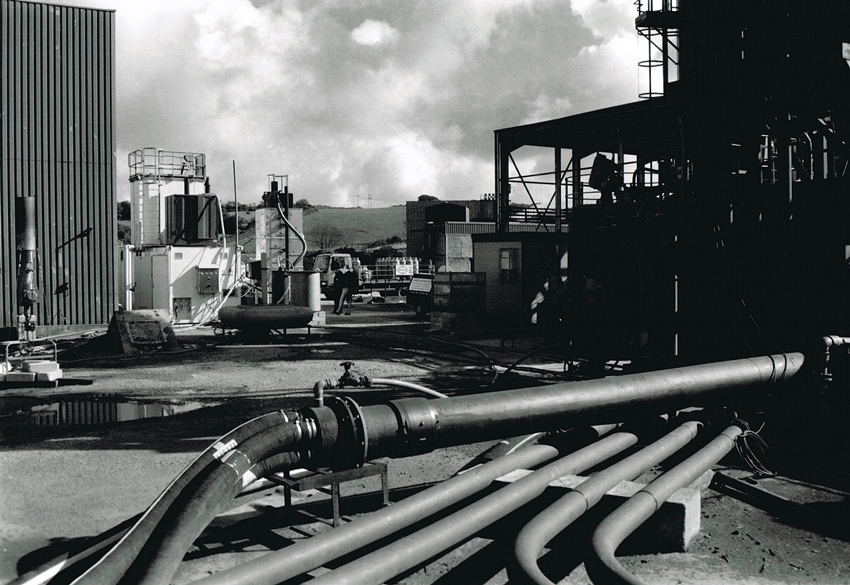 Wheal Jane Mine Gallery 1.13: A second view of the pipes from a different angle. 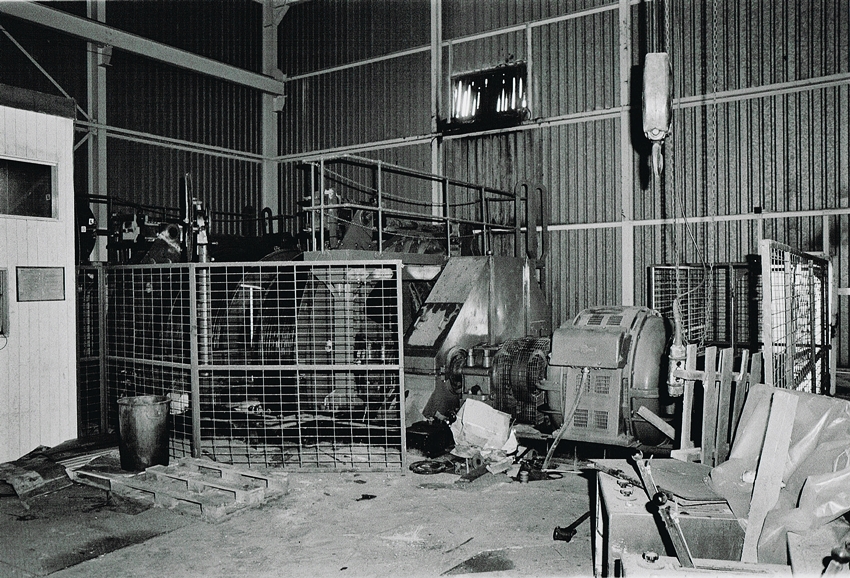 Wheal Jane Mine Gallery 1.14: The interior of Clemow’s winder house. The electric motor and the drums holding the wire rope can be seen. Wheal Jane Mine Gallery 1.15: A second closer image of the winder.

I have included an account by Stu Peters about his time at Wheal Jane Mine.

The Wheal Jane ‘Main Lode’ inclines about 70 degrees to the south and the mine was developed with access tunnels some 25 meters through the hanging wall where the stopes could discharge the ore via scrapers into ore chutes. Working a scraper where twin brakes controlled the up and down movement of the scraper was a hot and noisy experience, dust billowed up despite the water-sprays which went to increasing the humidity leaving one with a fine layer of mud on every exposed surface.
The thermal gradient in the granite is quite steep with lots of water and a mildly radioactive gas, Radon, to contend with.
Now to the real work – high-speed development! A two man team on drive development had a fixed routine. At the start of the shift we would descend to our level and walk to the face where we had left it drilled and charged with explosive. At the end of the previous shift after everybody had been withdrawn and surfaced, the charges set throughout the mine were electrically fired leaving the fumes to be cleared overnight. Now at the start of the shift, our work cycle started. If we had got it right the ‘lifters’, those explosives at the very bottom of the tunnel (and fired last) would have thrown the blasted rock back from the face where we could start to clear it using an ‘Eimco’ rocker shovel.
This was a track-mounted compressed-air driven device which could throw a bucketful of shattered rock over itself into the tipper truck immediately behind.
Clear the blasted rock, lay another couple of meters of track, extend the services (compressed air, water and ventilation pipes), drill a few roofbolts if it warranted it after barring down any hanging rocks and then mark out the newly exposed rock  face, set up our rock-drills on their airlegs and start drilling after a very careful inspection to check for any unexploded holes.
The drilling took time and care because a poorly marked and drilled face would not break cleanly and give us trouble on the next shift. We would usually be following a 3-inch diameter diamond drill hole.
This not only gave the explosives a place to start the cut but acted as a safety probe. Many of the old mines were not properly mapped out and to drill or blast into an old shaft (often filled with water) would be a fatal event.
After drilling the face, some 40 odd holes in a careful pattern to obtain a clean face after blasting, we would load the holes with explosives, dynamite or later ANFO (Ammonium Nitrate Fuel Oil) and set the detonators in a very carefully planned pattern using millisecond delays radiating outwards from the central cut to maximize the efficiency of the blast.
This working sequence would take just about the whole shift, tired and dirty we would check the wiring one more time prior to making the final electrical connection to the central blasting ring on the way out.
This was the life of the development miner. Work hard, play hard. Happy times! 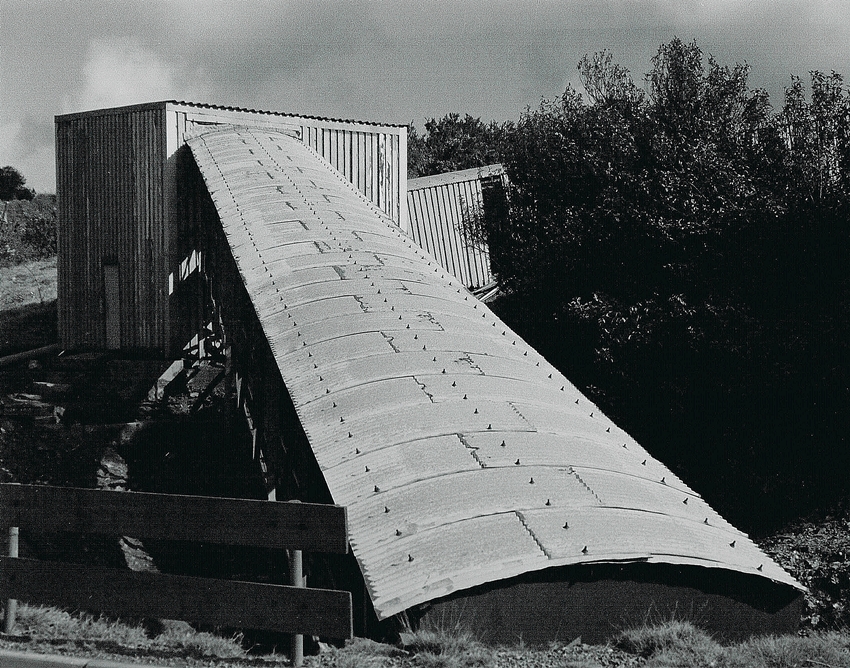 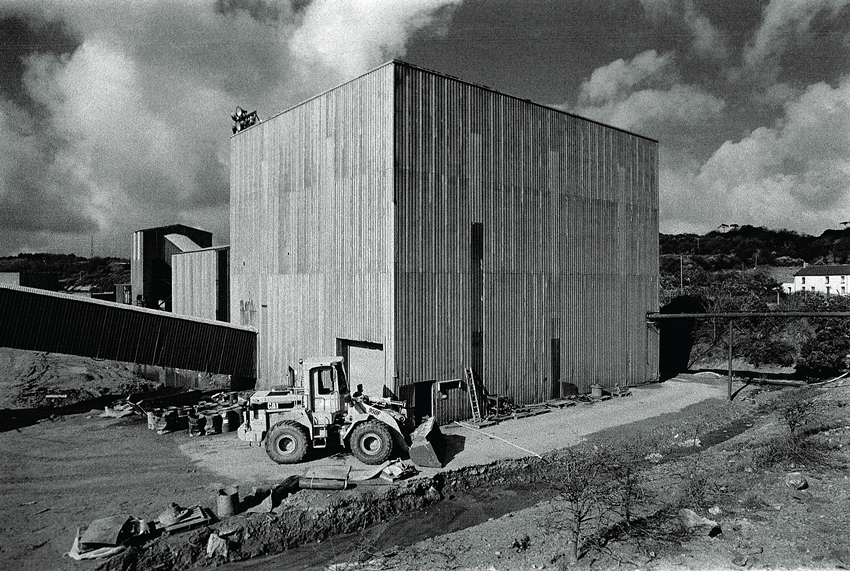 Wheal Jane Mine Gallery 1.17: An external view of the Primary Crusher House. 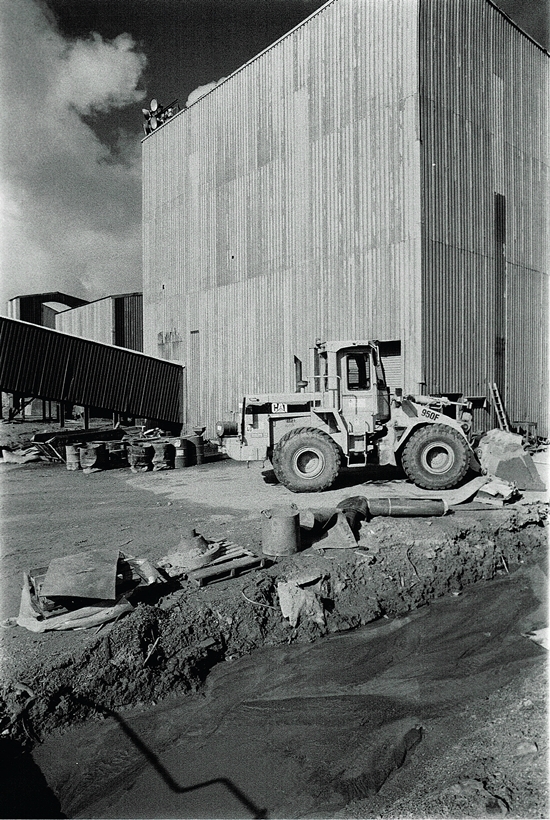 Wheal Jane Mine Gallery 1.18: A closer image of the crusher house, this was finally demolished in 2014. 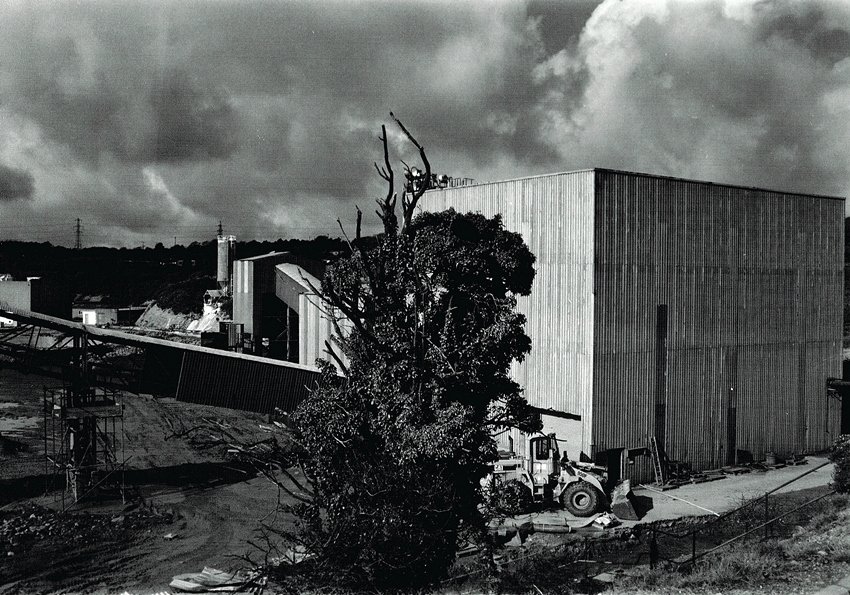 Wheal Jane Mine Gallery 1.19: A final image of the crusher house showing the buildings behind.