Cooks Kitchen Mine 2018, Tracey and I were so fortunate to gain access to the site. Above all my thanks to Dr Keith Russ for arranging the visit.

In early 2018 Cornwall Archaeological Unit were allotted the task of excavating the site of the man engine that once served the mine. So, until then the site was covered by a huge mound of earth and debris, the only evidence of any remains were several threaded bolts sticking out of the earth. The man engine machinery was driven by a 26 inch Horizontal Engine built in 1871 by Harvey’s of Hayle. Initially the rod reached down to the 140 fathom level. Subsequently when the engine stopped working in 1891 the rod had been extended to the 270 fathom level.

These initial images are taken from outside the fenced site. 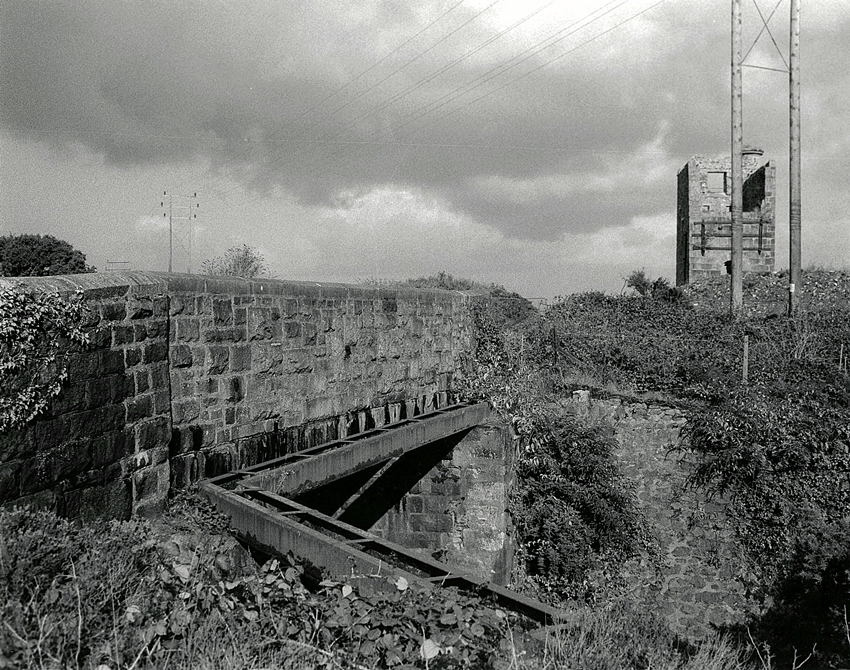 Cooks Kitchen Mine 2018.1 – Firstly, this image is taken from the other side of the main railway line. The shaft the man engine served was to the left of where I stood to take this photo. The remains of a water leat can be seen beside the bridge. The pumping engine house on Chapple’s Shaft is in the background. Cooks Kitchen Mine 2018.2 – A more detailed image of the leat. This was used during recent years to feed water to South Crofty Mine processing plant. 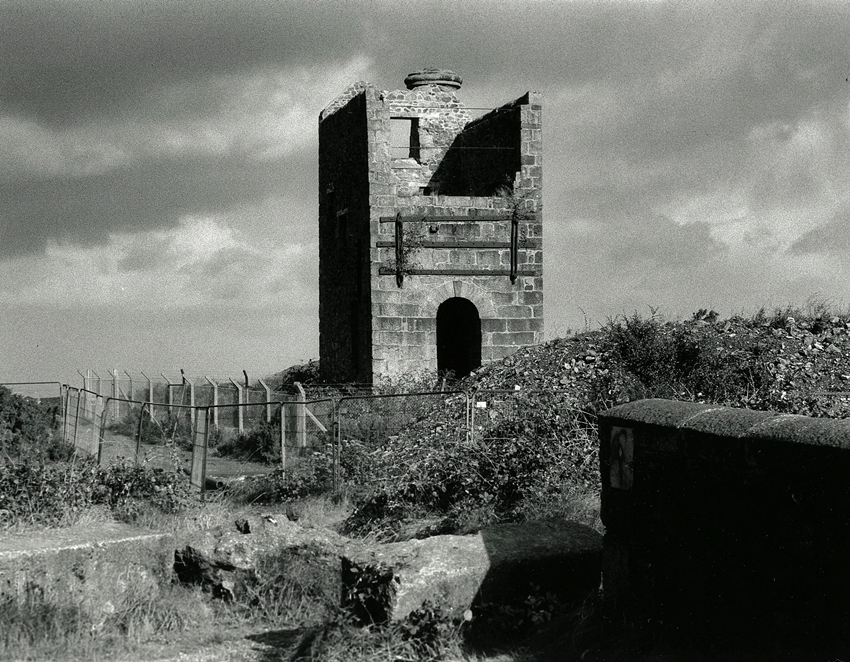 Cooks Kitchen Mine 2018.3 – Having crossed the bridge over the railway, this is the close first view of the site. The area is securely fenced off and belongs to South Crofty Mine.

The rest of the images on the page were taken on the other side of the fence. I must stress that this is private property and should not be entered without permission. However, it is hoped that sometime in the future the site maybe opened to the public. Cooks Kitchen Mine 2018.4 – It was a windy stormy day with a mixture of heavy rain and bright sunshine. This image is of some impressive clouds above the Pumping Engine House on Chapple’s shaft. Cooks Kitchen Mine 2018.5 – A second image of the impressive clouds.  In the foreground is part of the excavated Horizontal Man Engine House. It took a swing shovel five days to excavate the site. In the areas away from the Engine House 3.5m depth of soil and waste had been removed. 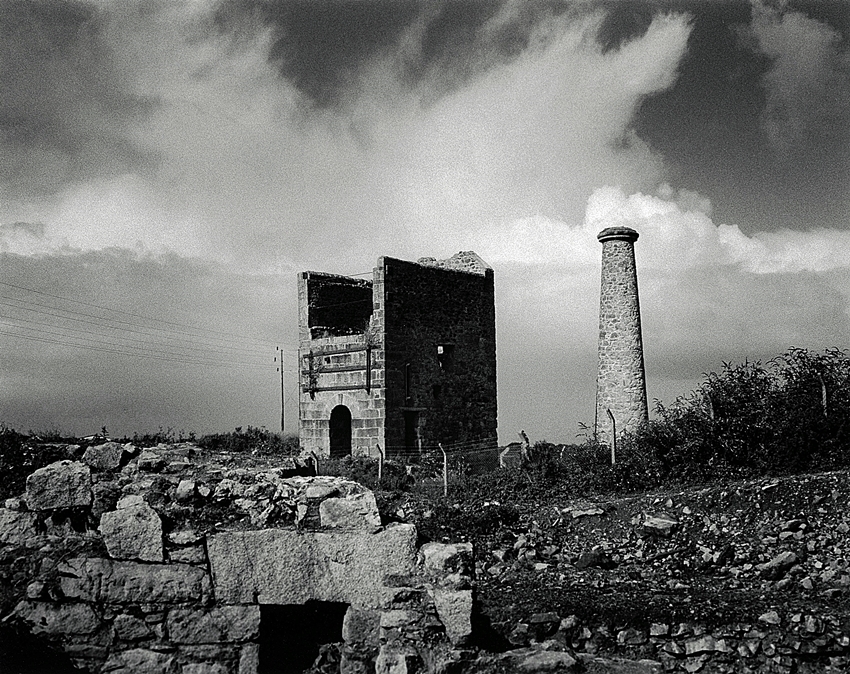 Cooks Kitchen Mine 2018.6 – A closer image of the remaining stonework. The Engine House after the excavation measured 23m long and 6.5m wide.

The excavated buildings comprised of; the Horizontal Engine House, Boiler House West, Boiler House East and a possible late 19th Century Air Compressor House. The Eastern Boiler house was a later addition which contained a further two Cornish Boilers. This was probably built when the Man Engine was extended in depth in the late 1880’s in order to supply more steam power to the engine. 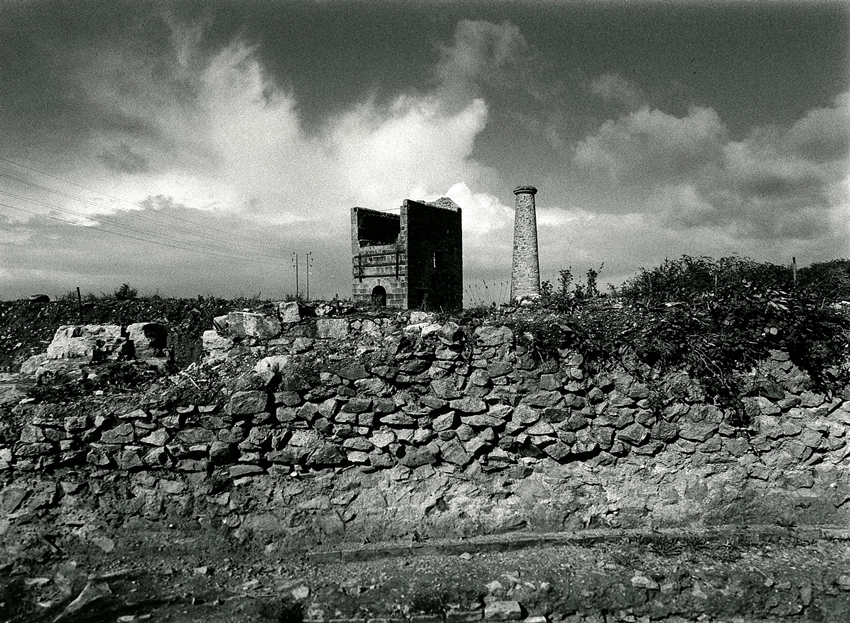 Cooks Kitchen Mine 2018.7 – Part of the Western wall of the Horizontal Engine House. It was very surprising to see how much had been preserved of the site.  During the last few years it had all been covered over and forgotten.

Unlike traditional Engine Houses where the structure of the building took the weight of the machinery this was an enclosed house. Therefore the structure was built around the massive foundations for the installed machines. Fixing bolts still remained on the loadings, which in some places reach 3.8m in height. 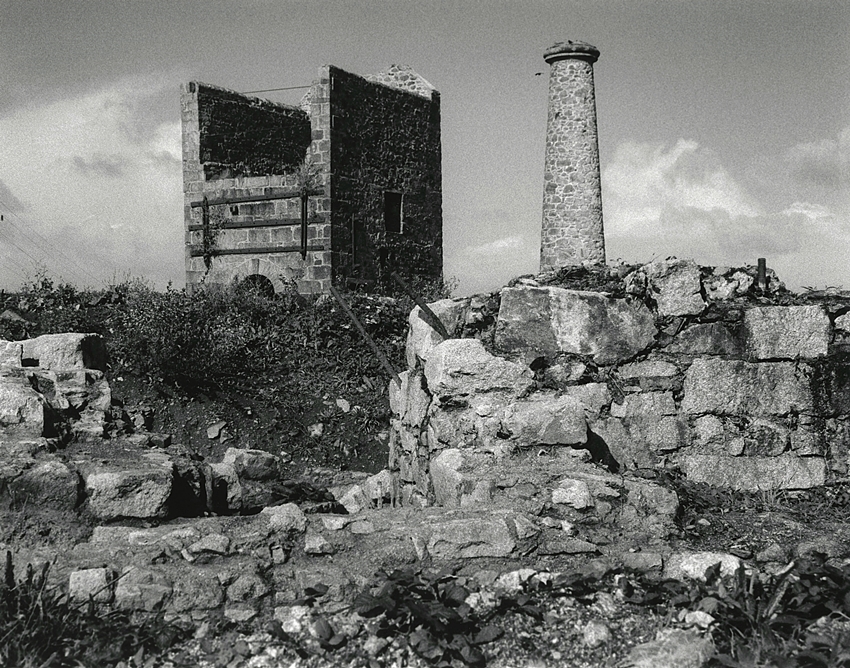 Cooks Kitchen Mine 2018.8 – Part of the massive loading for the 26 inch Horizontal Engine.  Several fixing bolts can be seen poking from the masonry. The engine served Dunkin’s shaft  which is situated on the ground on the other side of the mainline railway.

Flat rods would have lead from here to Dunkin’s Shaft. At the top the horizontal motion would have been transferred to vertical motion by an angle bob. The rods for the man engine in the shaft measured around 200mm square. The engine during operation ran at approximately 5 strokes a minute. The typical vertical movement in the shaft would have been about 12ft stroke, consequently a miner could descend to the 270 Fathom level in around 30 minutes. Cooks Kitchen Mine 2018.9 – This image is of a single fixing bolt for the engine. This was at one of the higher points of the masonry loadings. The level of the ground behind shows the original soil height over the site. 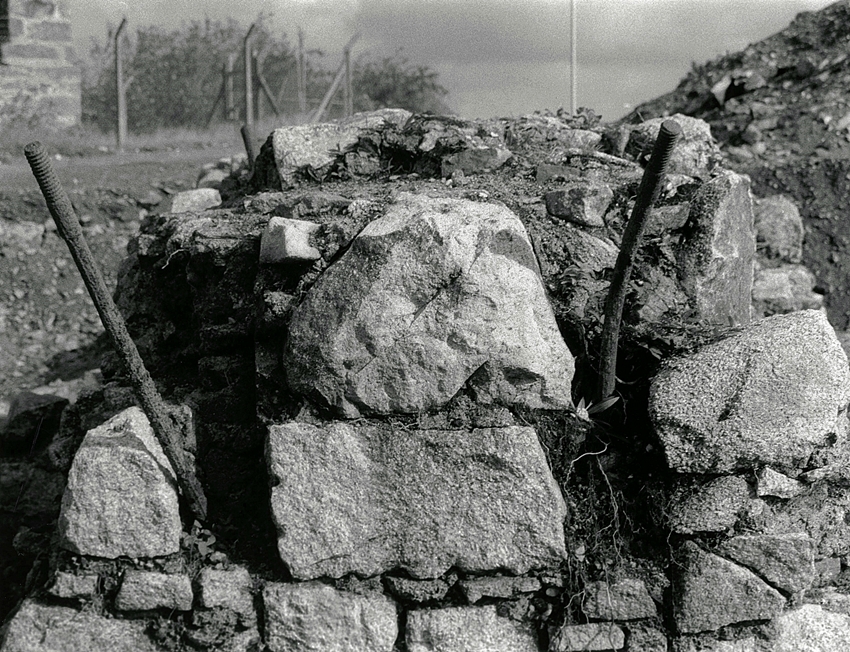 Cooks Kitchen Mine 2018.10 – A closer look at the massive foundation loadings. The bolts reach far down into the masonry. The ends are accessible by holes in the base where the ends could be tightened. 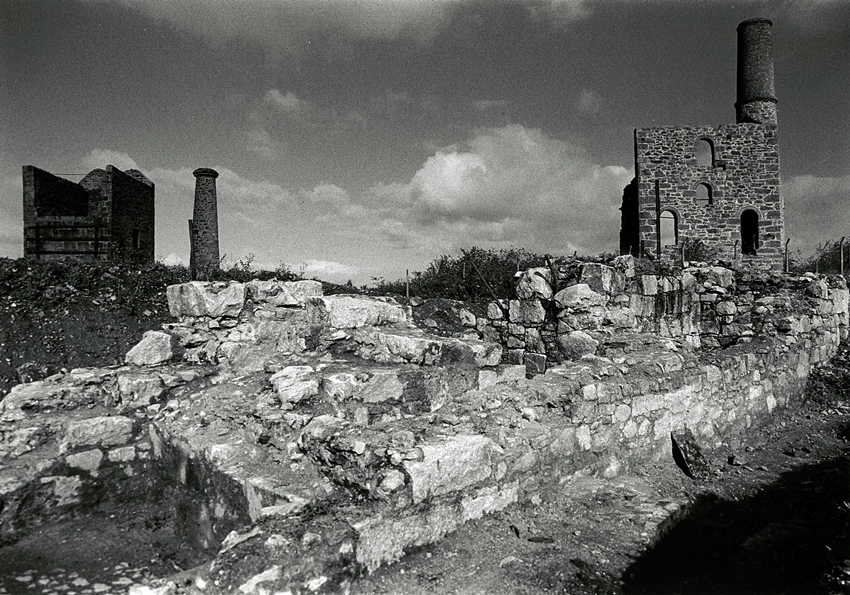 Cooks Kitchen Mine 2018.11 – This view of the site shows the complete foundations for the man engine. The area on the extreme left of the image was a stone cobbled floor. In the background are the two Engine Houses on Chapple’s Shaft. Pumping on the left, Whim on the right. Grease from the engine can still be seen on some of the masonry blocks.

This side of the structure was occupied by the Western Boiler House. The building was 16.5m long and 3.0m wide. At the far end are the foundations and scant remains of the chimney. In the image above one of the curved boiler supports can be seen resting against the wall. 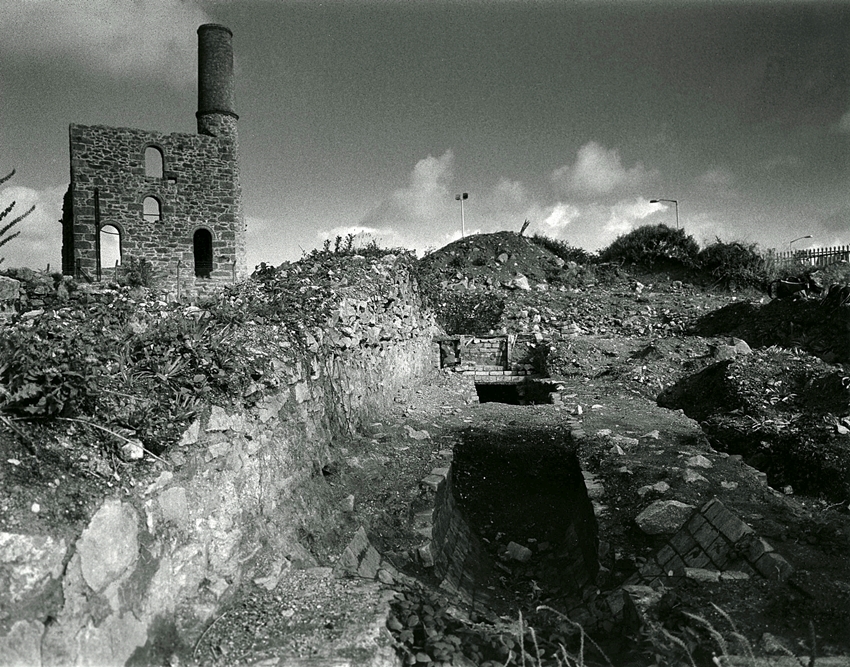 Cooks Kitchen Mine 2018.12 – The Eastern Boiler House was added during the late 1880’s. It subsequently housed two Cornish Boilers.

The second Boiler House was much larger being 15.3m Long and 6.0m wide. In the image above the curved brickwork boiler mounts in particular can be clearly seen. This had certainly been built to a very high standard and has survived well. 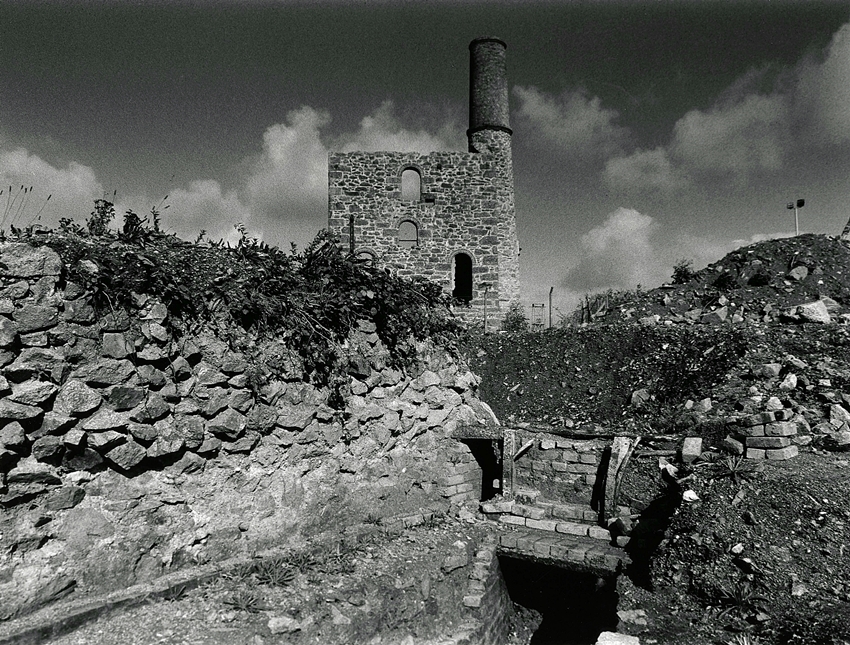 Cooks Kitchen Mine 2018.13 – This is at the far end of the Western Boiler house. This was a well preserved Damper and Flue opening for the boiler. Cooks Kitchen Mine 2018.14 – An image that clearly shows the size of the masonry mountings for the man engine. 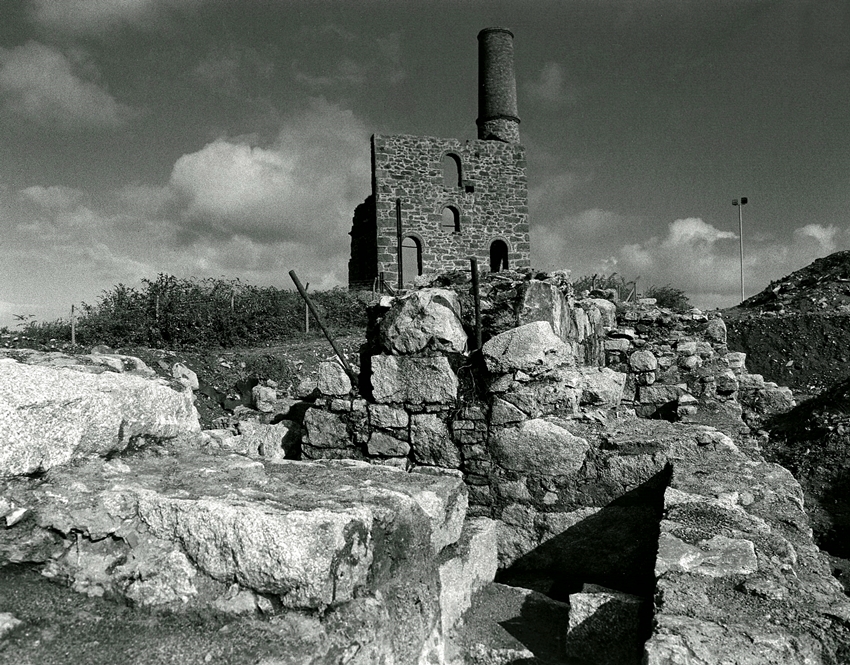 Cooks Kitchen Mine 2018.15 – Standing on the engine loadings. The slot on the left of the image was probably for the one of the pistons. 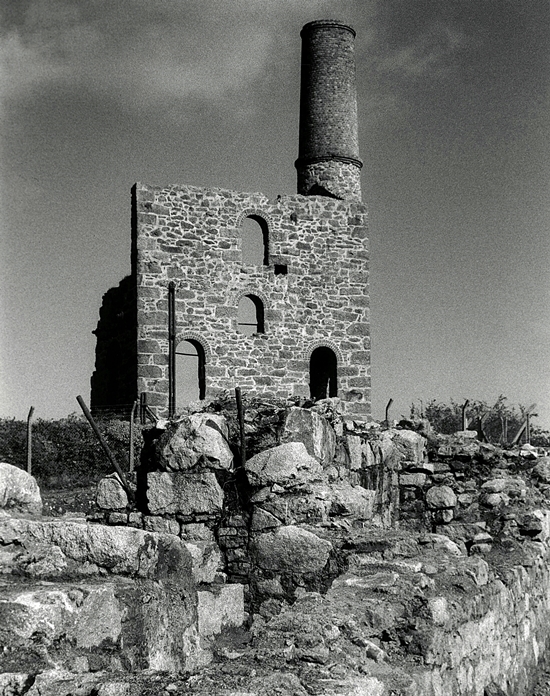 Cooks Kitchen Mine 2018.16 – Chapple’s 26″ Whim Engine House stands behind the loadings for the man engine. Also many fixing bolts can be seen in this image. 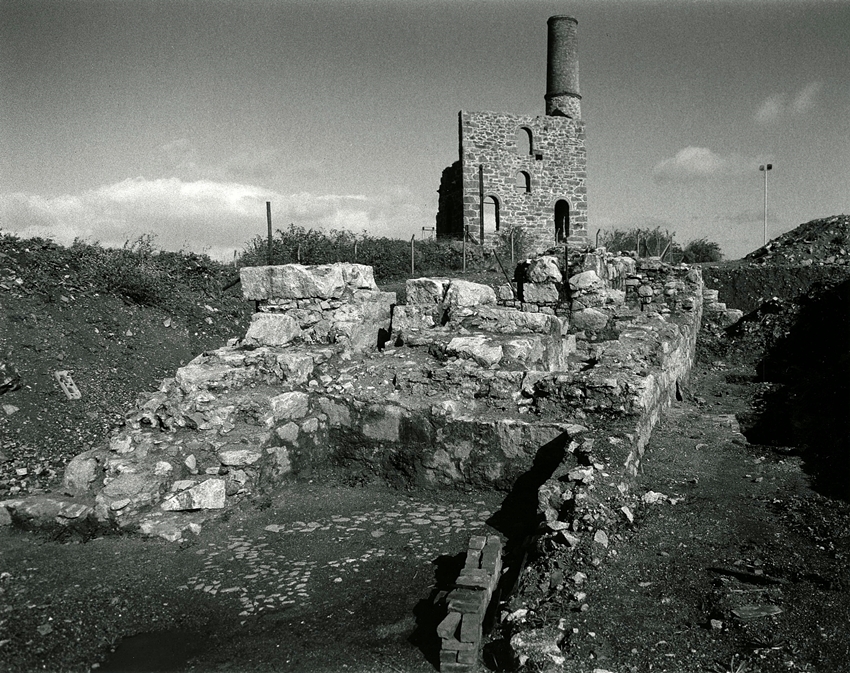 Cooks Kitchen Mine 2018.17 – A closer image of the Southern end of the Man Engine House. The cobbled floor in front can be seen clearly.

I would have loved the chance to have been involved in the dig. It must have been a wonderful feeling of achievement as the site was gradually uncovered. Cooks Kitchen Mine 2018.18 – The remains of the Man Engine House taken from the Southern End, looking down form the original ground level. The two boiler houses would have been on the right of the image. 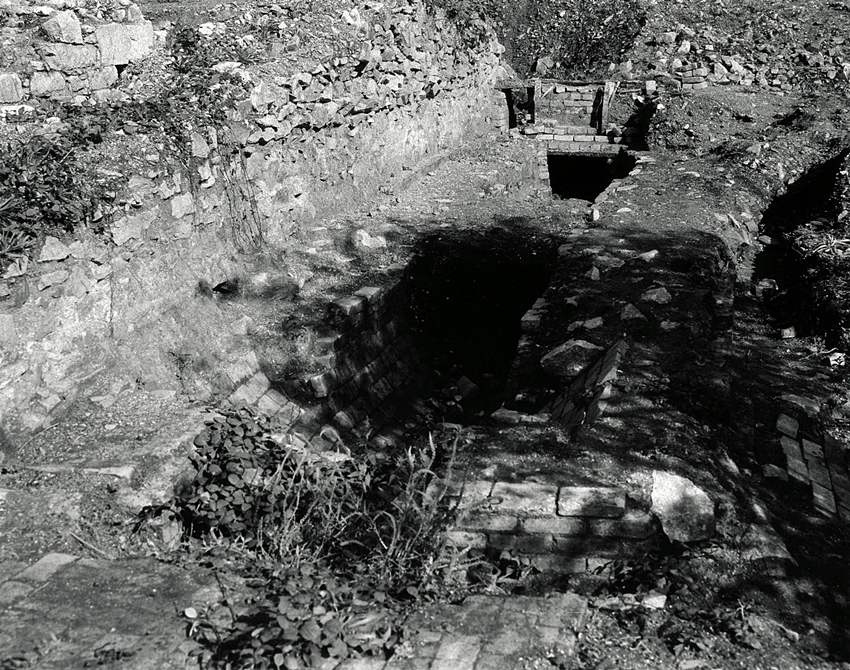 Cooks Kitchen Mine 2018.19 – A final view of the Easter Boiler House. The hollows where the boilers were situated can be clearly seen. The brickwork on the floors and  in the lower walls was remarkably well preserved. It was certainly a real privilege to walk on the same floor as those long departed miners and engine drivers.

Sadly while we were there the heavens opened and the time had to be cut short.

Much of the information on this page has been sourced from:
The Cornwall Archaeological Unit’s report paper titled:  Cook’s Kitchen, Pool, Cornwall: “Archaeological Excavation of the Man-Engine House”.
Written by Ryan Smith and Adam Sharpe.