Levant Mine Skip Shaft was the main haulage shaft for the Mine. It is situated perilously close to the cliff edge it was narrow and crooked with a total depth of 278 fathoms. On the surface is the preserved winding engine that served the shaft, built by Harvey’s of Hayle in 1840. This all enclosed engine has a 24” cylinder with a 4ft stroke, it is believed to be the oldest existing engine in Cornwall.  Served by a single Cornish Boiler it is now in the care of the National Trust and open to visitors.

A cross section through the Levant workings, showing the proximity to Geevor Mine.

In the late 1950’s Geevor needed to increase their ore reserves to guarantee the future of the mine. It was believed that the future lay westwards and under the sea. Between Geevor and the future development lay Levant Mine, closed in the 1930’s. The decision to investigate and dewater the old mine was made in 1959.  It was found in the early 1960’s that the sea had broken into the old workings when the old miners had worked a lode to a point just below sea level in the 40 fathom level. After an initial failed attempt, the breach was finally secured in 1969. This was a major engineering achievement that took 3 years and 2,500 tons of cement.
By 1970 the old mine had been drained to 190 fathoms, a new electric winder and headgear were installed and the shaft had been refurbished to a depth of 160 fathoms. By the end of 1972 the exploration of Levant had ceased due to the disappointing results.
Levant was dewatered to the 200 fathom level, Skip Shaft was retained for man riding. Geevor could now exploit the undersea lodes which held so much promise.

The following images were taken in Levant Mine Skip Shaft when Dave and myself had a trip down the ladders to adit level. Since then access has been restricted due to the dangerous condition of the timber work and ladders. 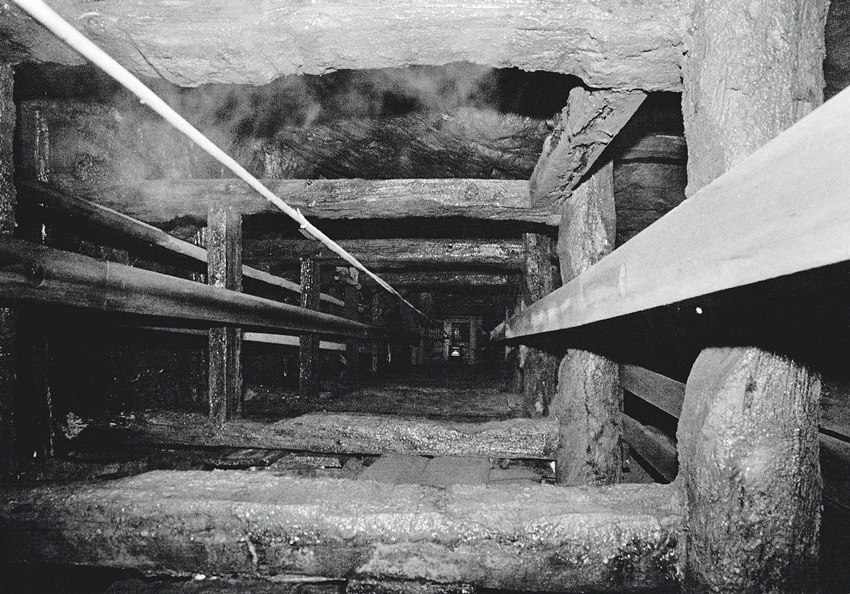 Looking down Levant Mine Skip Shaft from the top, the wire going down the middle is for an illuminating light halfway down. Dave standing at the shaft station at adit level. At this point we are around 60m down. 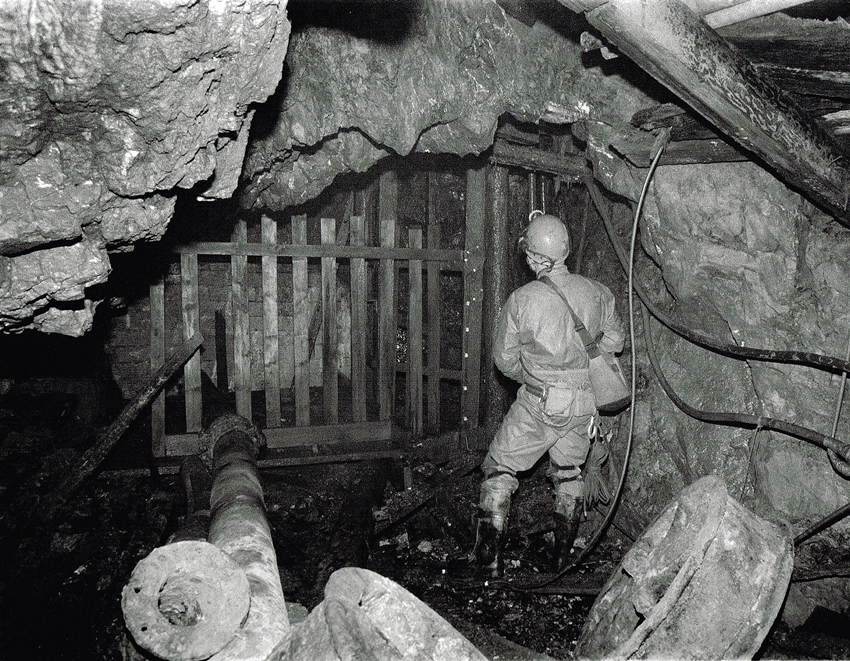 A second image of the shaft station, it was very wet down here with water thundering down the shaft. In the foreground are 2 huge pump rod wheels. 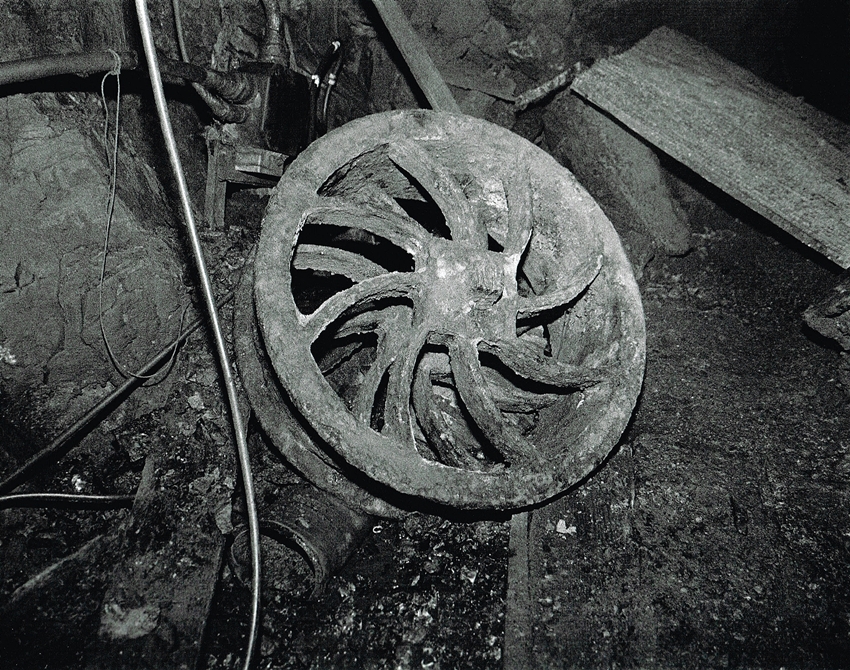 A closer image of one of ornate wheels. These were put into the shaft where there was a change of direction. The pump rod would run along the wheel keeping it clear of the shaft walls. These changes of direction were an issue, due to increased friction on the pump rod there was a chance of fire. An electrical box and cable put in by Geevor can be seen at the ear of the picture. A second image showing both the wheels. 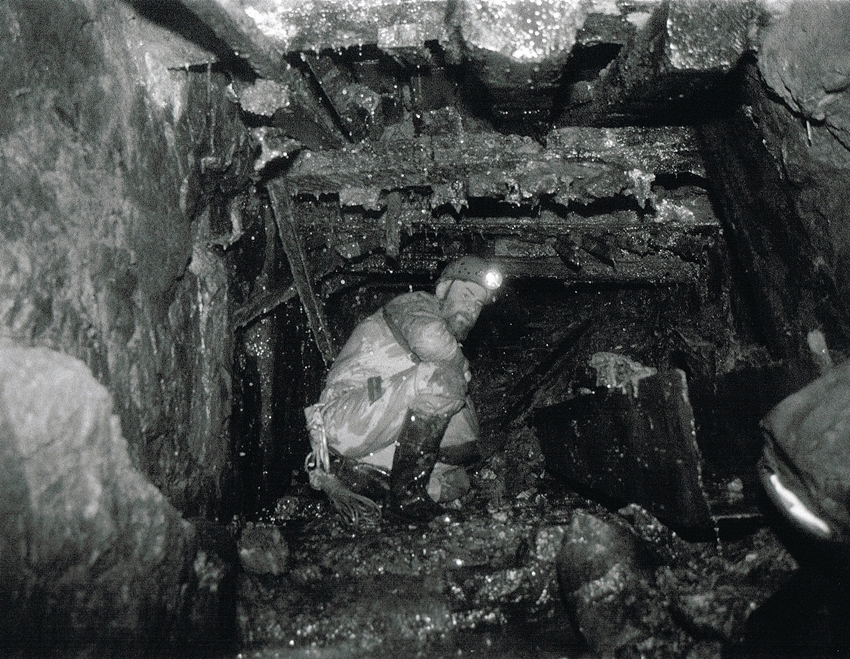 This is as far as the adit goes. Dave is infront of the collapsed Man Engine Shaft. 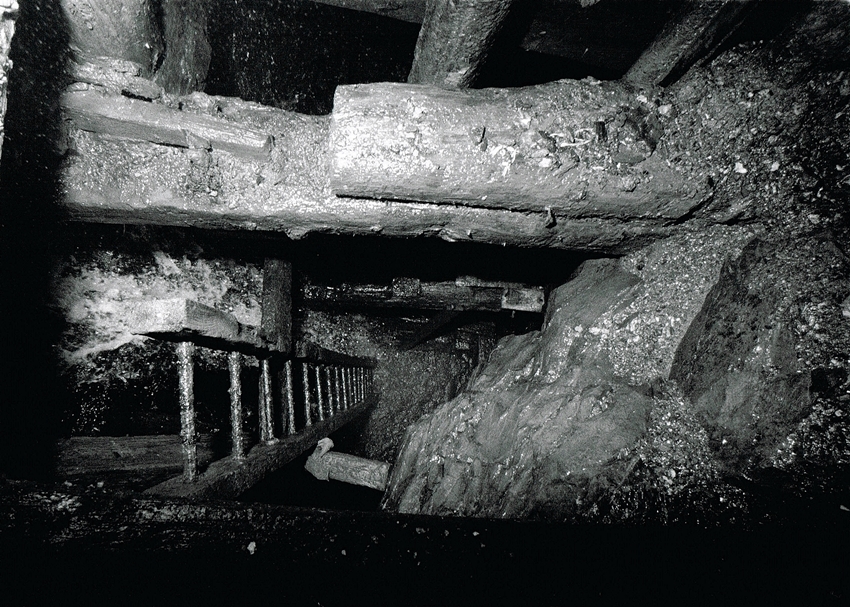 Looking down Skip Shaft at adit level, the water is about 6m down. Water was flowing down the shaft below us, lots of noise and water vapour in the air. 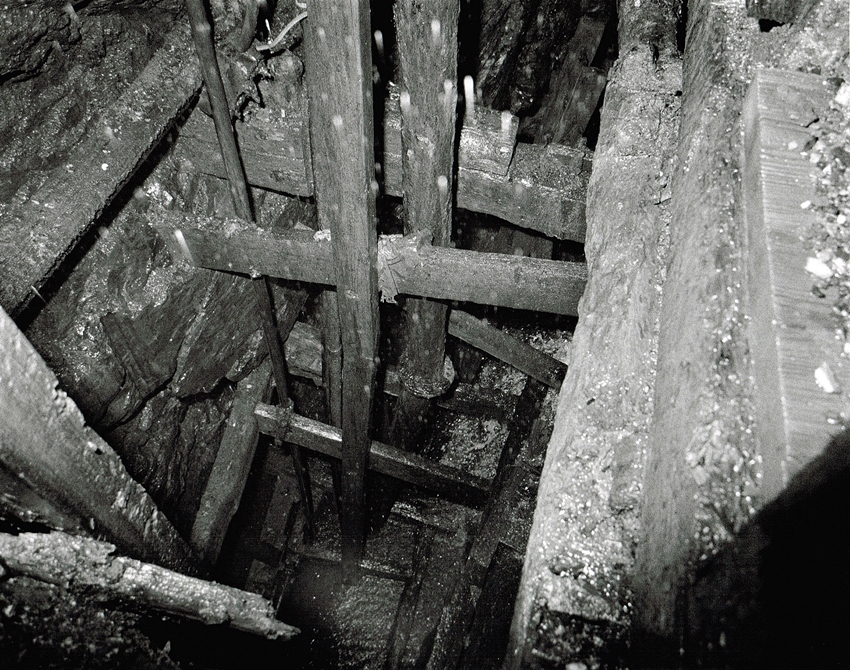 The flooded shaft with the ladders and guides disappearing into the dark water. 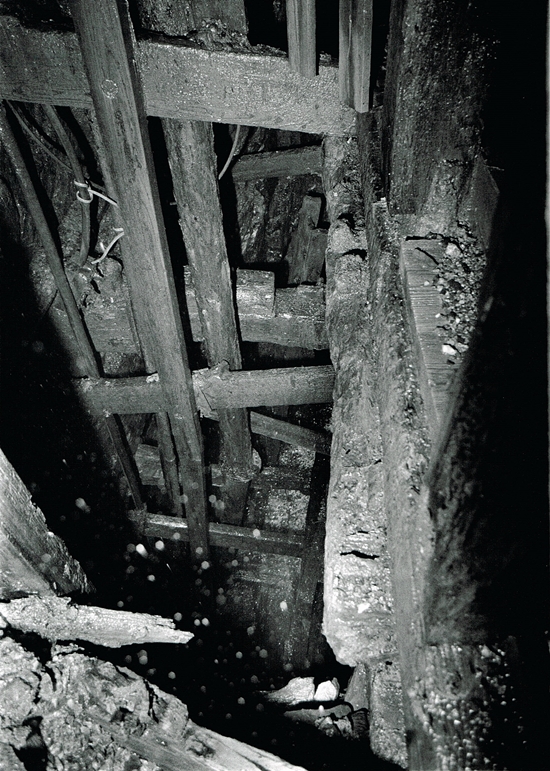 The timberwork in the shaft had seen better days, water droplets captured by the flash can be seen falling down the shaft. 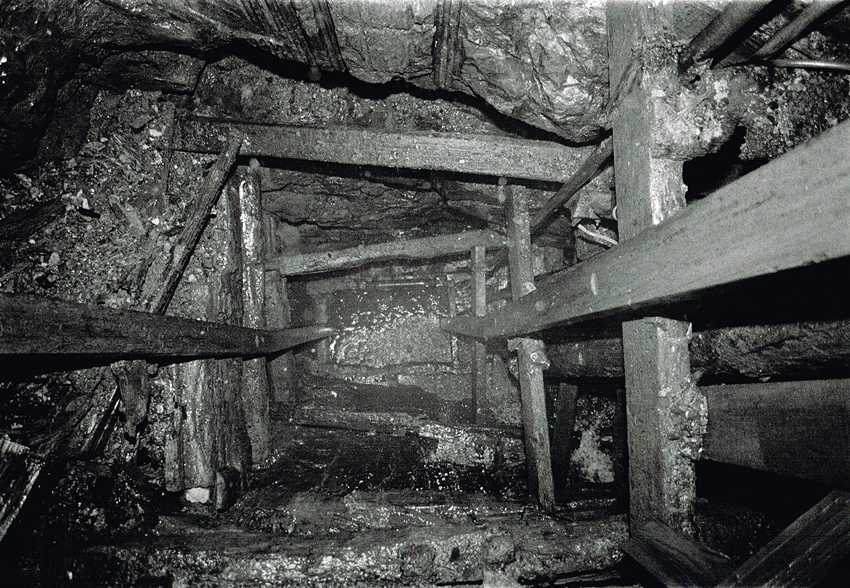 Started to climb out on the ladders, this image was taken from the first platform up. This clearly shows how narrow and crooked Levant Mine Skip Shaft is. The guide rails for the manriding cage can be clearly seen.

A note from Bob Orchard about Skip Shaft: This shaft was a nightmare…….very crooked with highly polished groves worn in the rock at the changes of direction. Cage used to “bind” in the runners when being lowered (Everyone then jumps up & down because wire rope is still being paid out)……Have changed the Flygt B2151 submersible pump that was in Skip shaft just below Geevor 14 level several times. 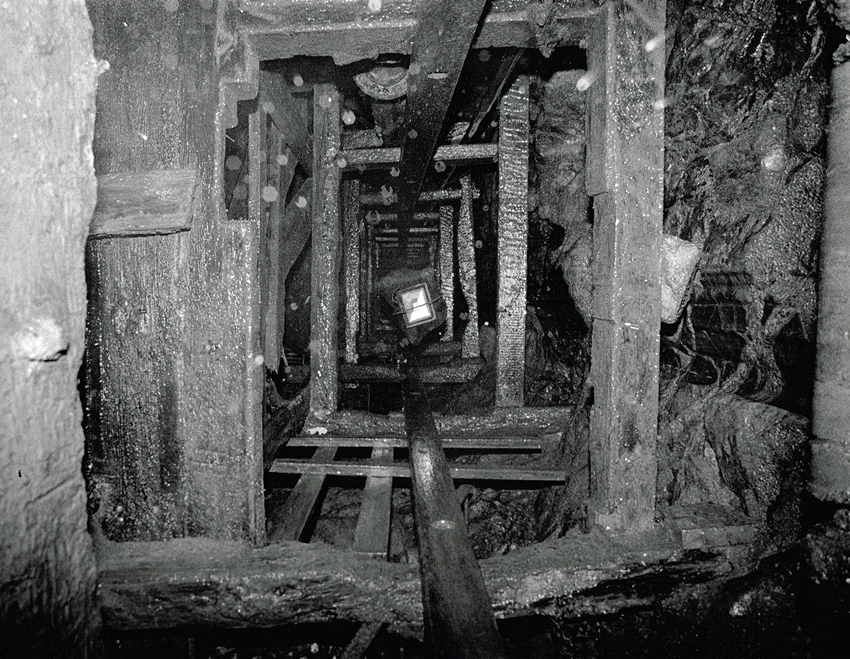 Looking up the shaft from the same level, plenty of water falling down. 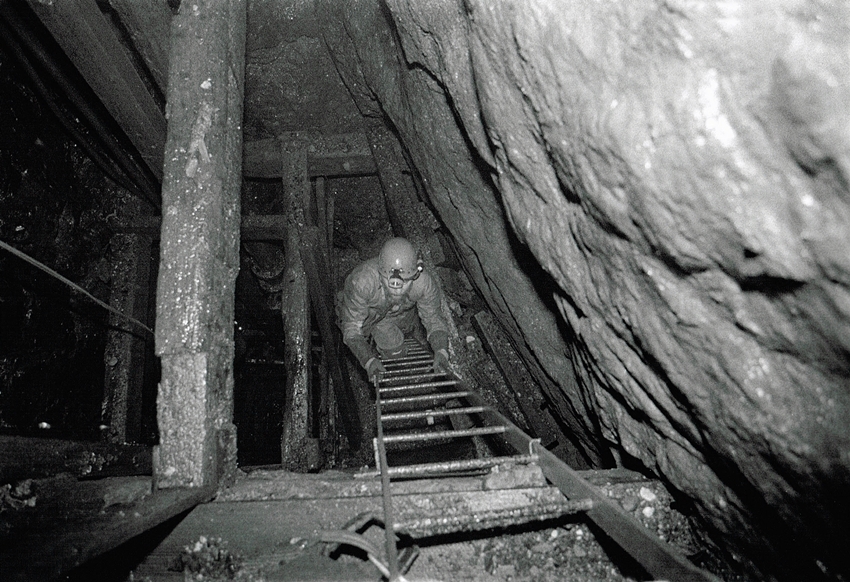 Dave climbing up the ladder, water can be seen falling down the shaft on his left. 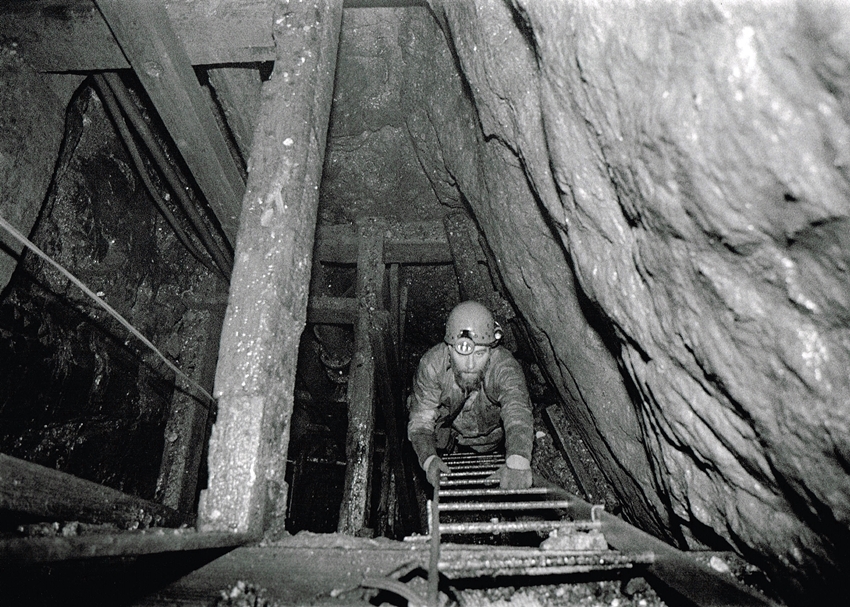 Dave a bit closer on the same ladder. 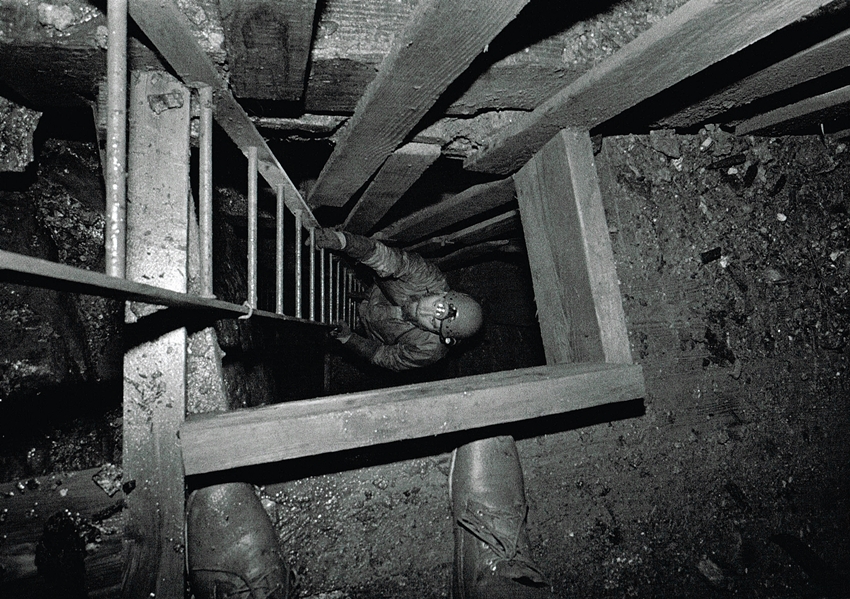 Dave approaching one of the platforms in the shaft. 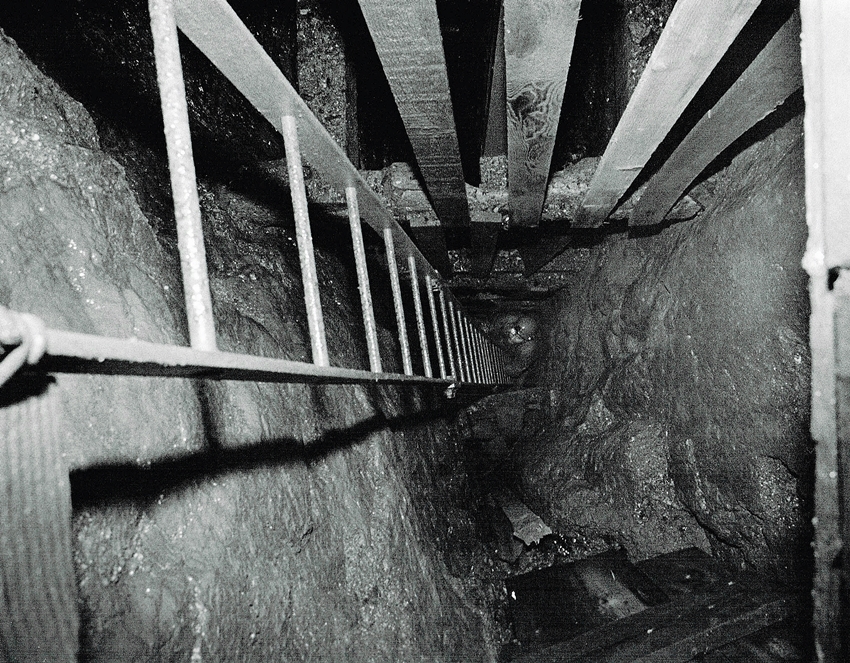 This picture clearly shows how tight some of the ladders were, this was a particularly long one that wobbled horribly when climbing it. 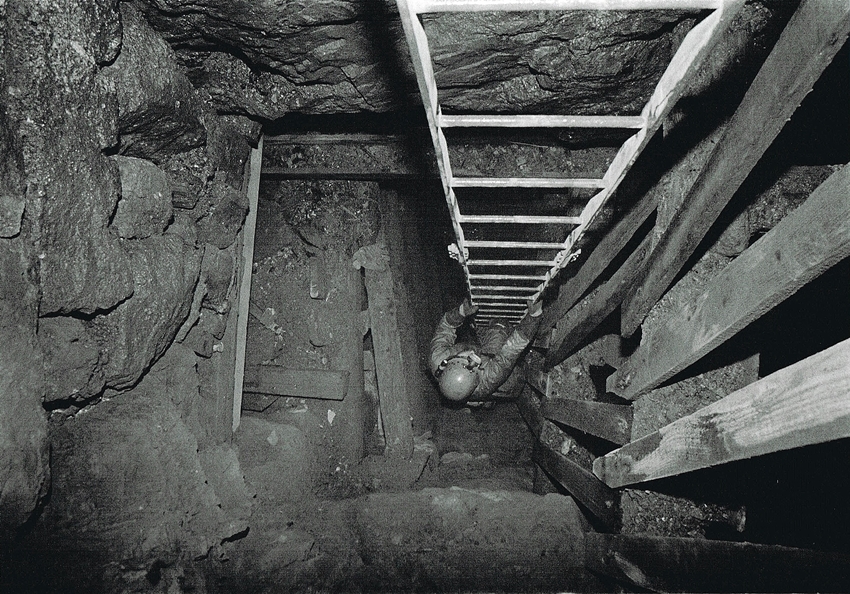 Approaching the top of the shaft, the timbering here was in slightly better condition.

It was a good trip, climbing the ladders with a camera bag was a nightmare. The cameras took some abuse and the water in the air fogged up the lenses. I managed however to get some good images. Levant Mine Skip Shaft
My thanks to all at the National Trust, and to my friend Ryan Thomas who arranged the trip and escorted us around. I would have loved to do it again but the shaft has since been closed off due to its dangerous condition. So ends the page and the story of Levant Mine Skip Shaft.