Roskear Shaft Site 2, so, this is the second page which looks at this remarkable historical survival. Sadly the site is on the verge of total collapse. The Compressor House is unique as it contains many original features dating from when Roskear Shaft was first constructed. 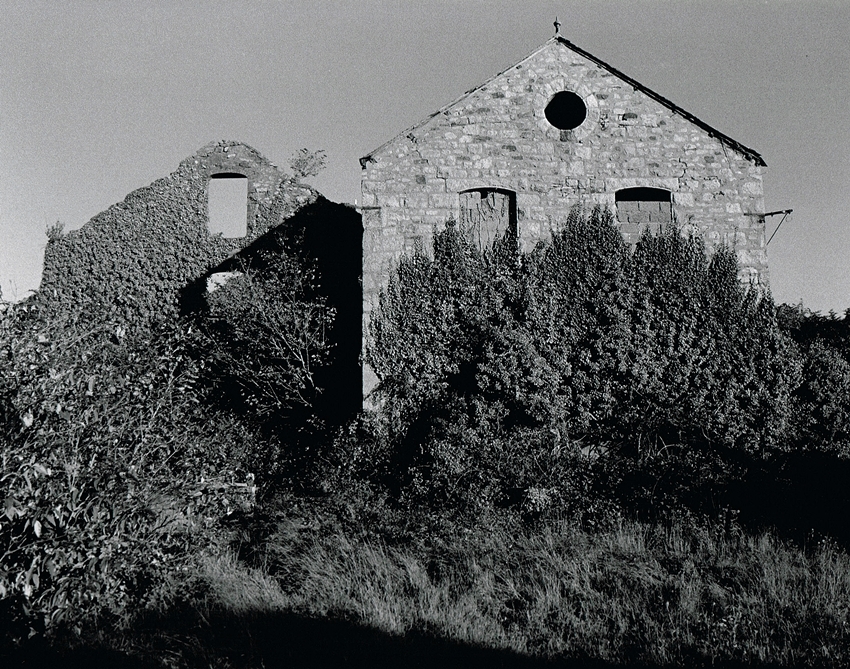 These are the rear walls of the Winder House (L) and the Compressor House (R).  These date from the 1920’s when New Dolcoath acquired the Roskear Shaft site.

The building belonging to the Roskear Shaft site are in a varied state of repair. The area has seen several major fires which destroyed part of the site formally used as offices. 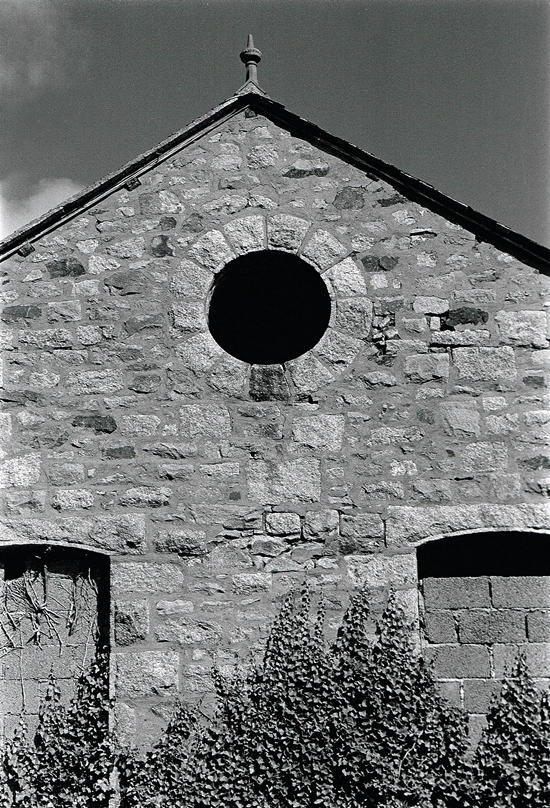 A closer look at the rear wall of the Compressor House, the circular window is framed by dressed stone. In many places the mortar has suffered badly. 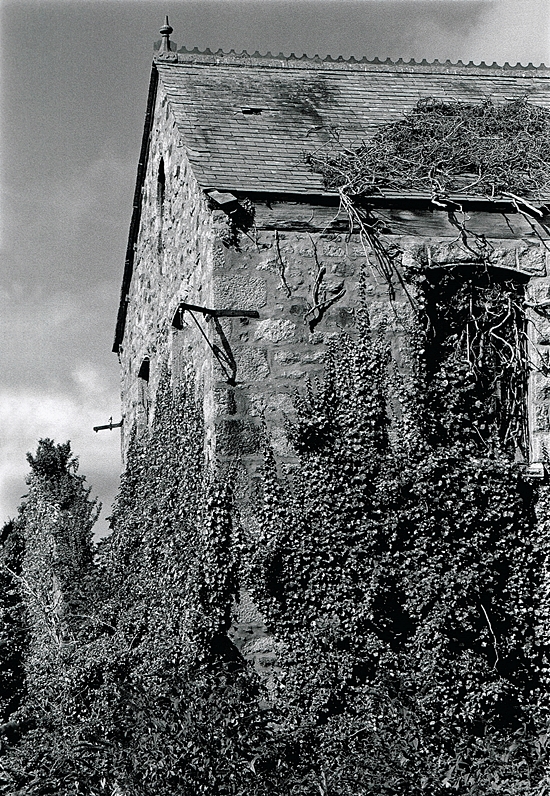 A view of the side wall. The ivy and vegetation have taken their toll on the stonework. Original brackets are still attached to the rear wall. Everything about the building is ornate and attractive to look at.

The rear wall of the Compressor House was all blocked off. However access was possible through a side entrance which has since been secured. The interior was amazingly well preserved, a time machine at Roskear Shaft. 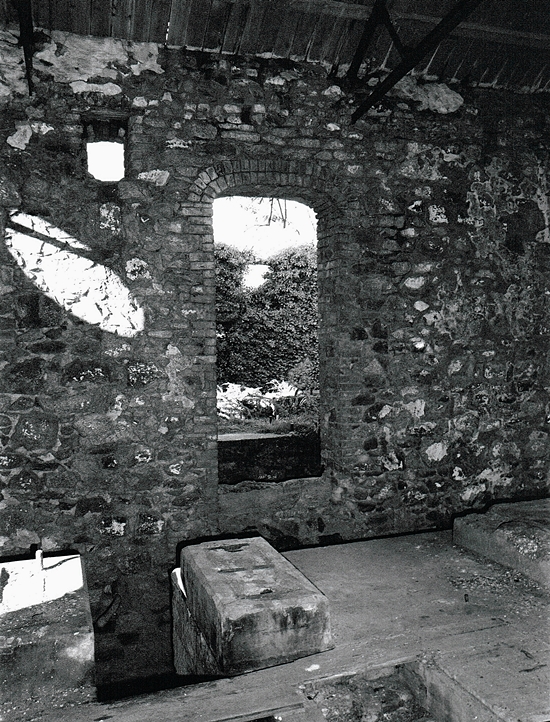 This is the doorway that led from the Compressor House to the Winder House at Roskear Shaft. Mounting for the machinery took up most of the floor area. Because of the current state of the building it is unwise to enter. 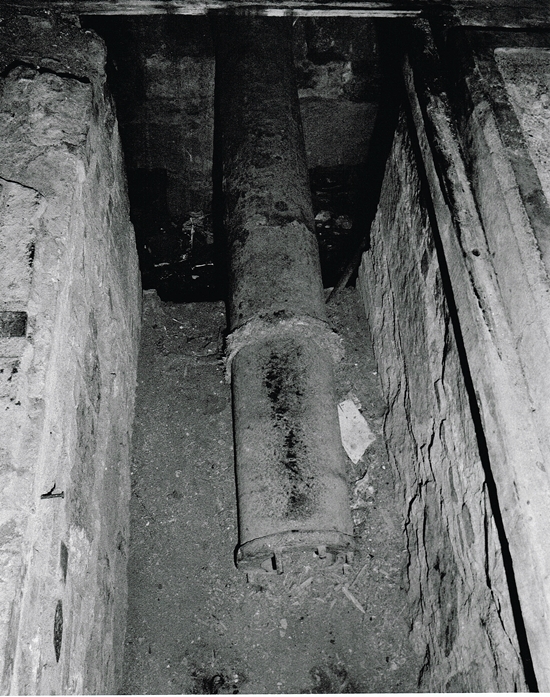 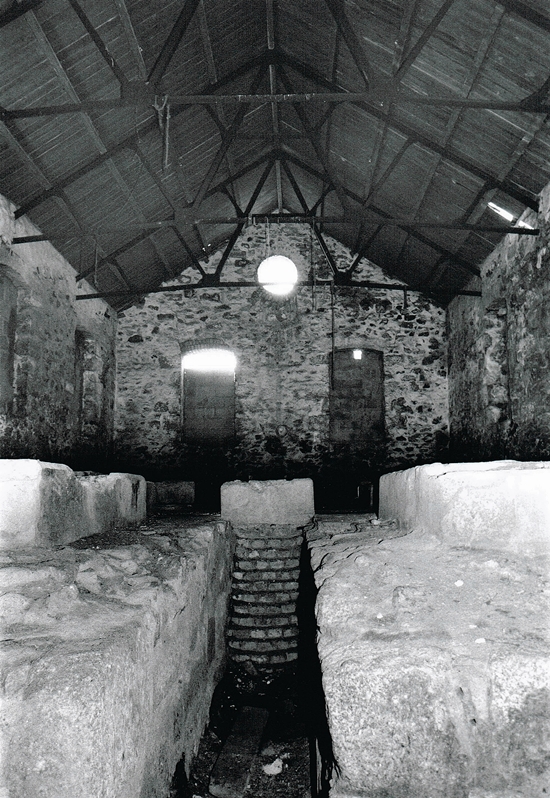 The roof is in wonderful condition. I would guess it was re-roofed at some point. This is looking towards the rear of the building. 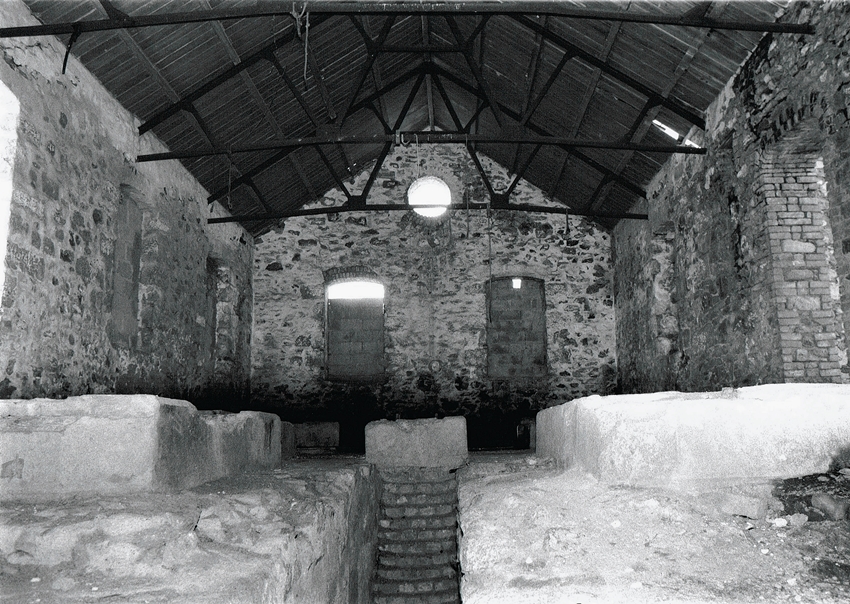 The mounting blocks for the machinery were about 6ft above the level of the floor. The steps in the image would allow access to maintain the machinery when it was in use. 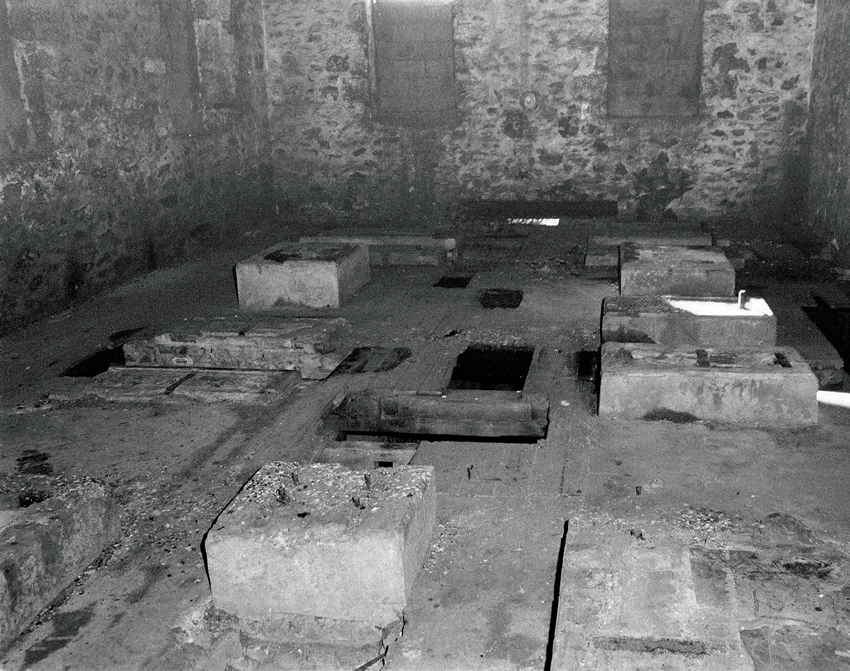 The mounting blocks for the Compressor. Around the outside wall of the building were original floorboards. Sadly they were rotten and not for walking on. It was very interesting that on the outside of the Compressor House there was this suspended pipe. It actually led to the building next door. 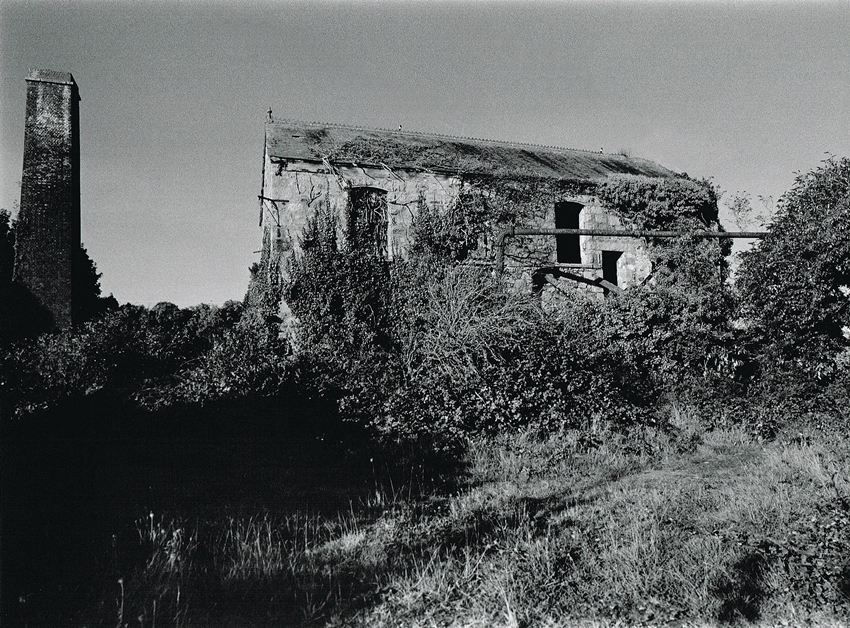 A side view of the Compressor House at Roskear Shaft. The iron pipe can be seen leading from the building. The chimney for the boilers which powered the site is on the left of the image. Very sad that the roof had suffered. 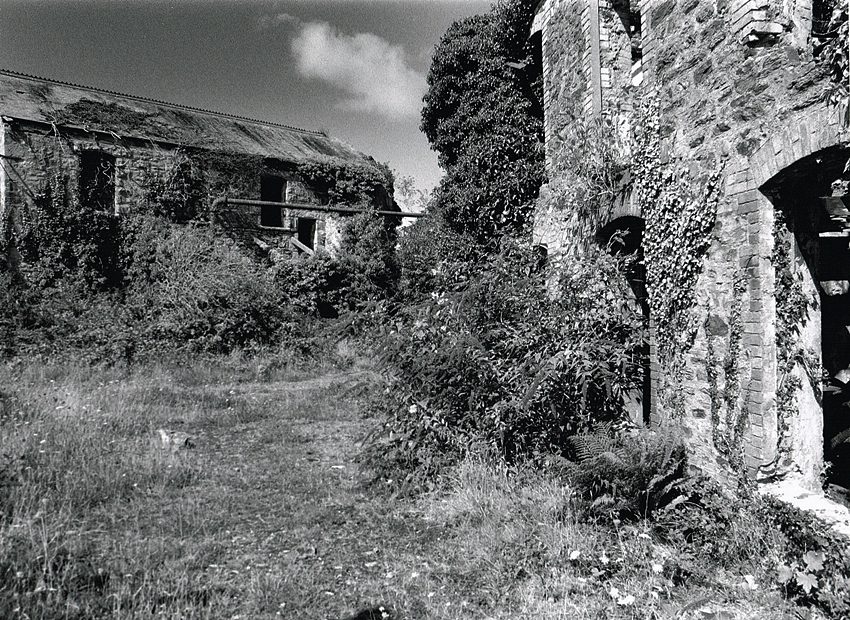 A final view of he Compressor House, in the foreground are the remains of the offices.

The next set of images are of he ruined offices. These were initially used by Bennett’s Fuse Works. Sadly they were the target of vandals and were burnt down in recent years. A great loss as it is a lovely building full of history. 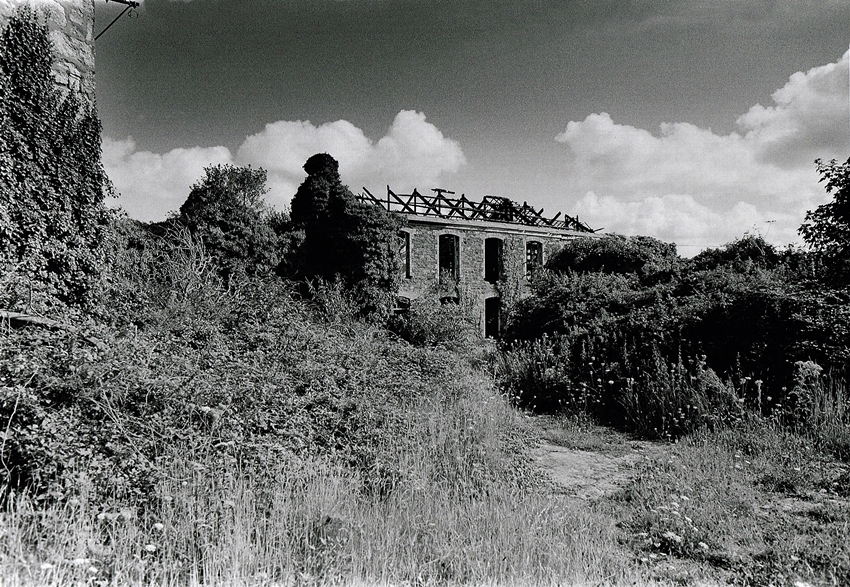 These are the sad remains of the Bennetts Fuse Works offices. The area on the right of the image was a coal store. 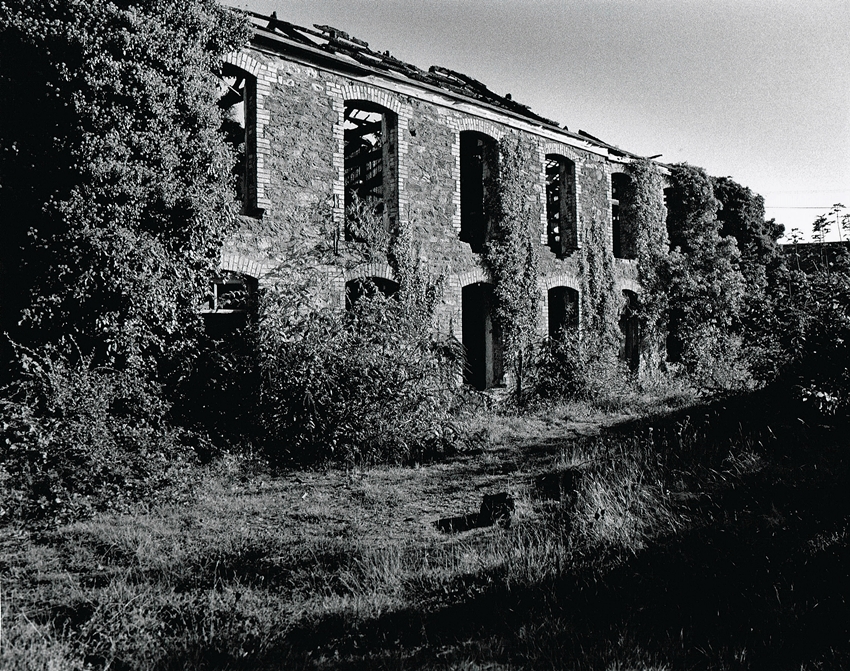 The frontage of the building, after successive fires it is a surprise anything is still standing. 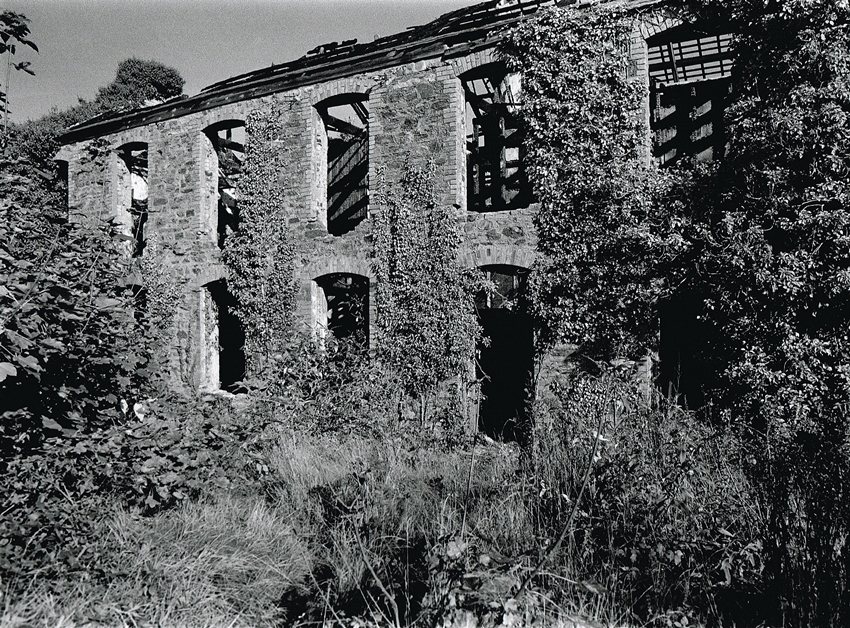 In it’s heyday it must have been a beautiful building. 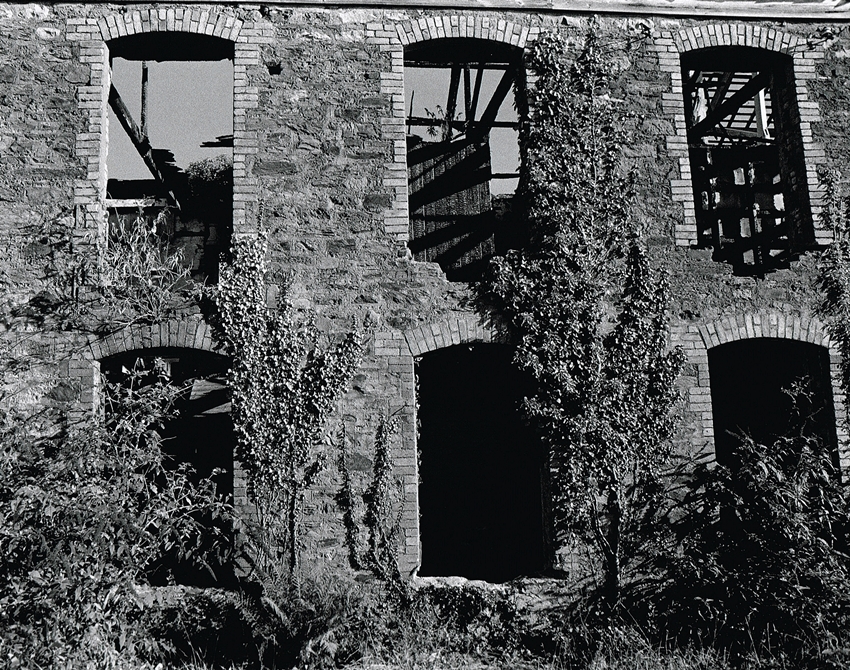 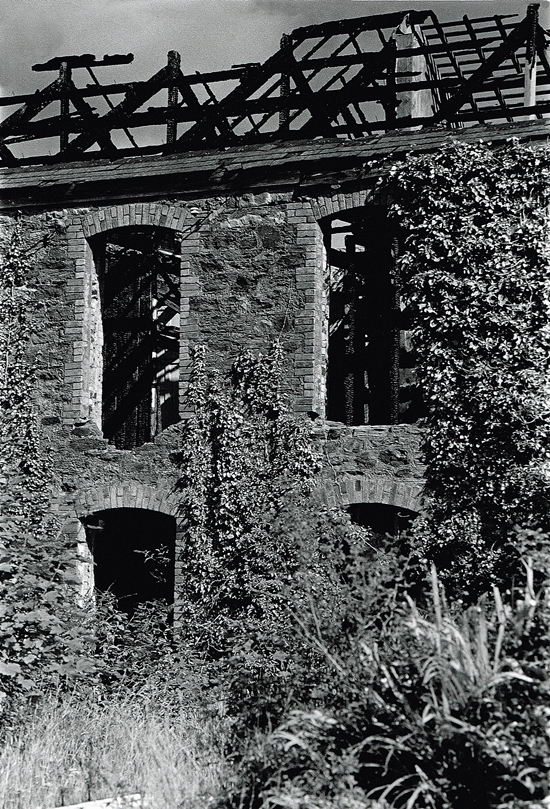 The roof has been completely destroyed and the inside is totally gutted. 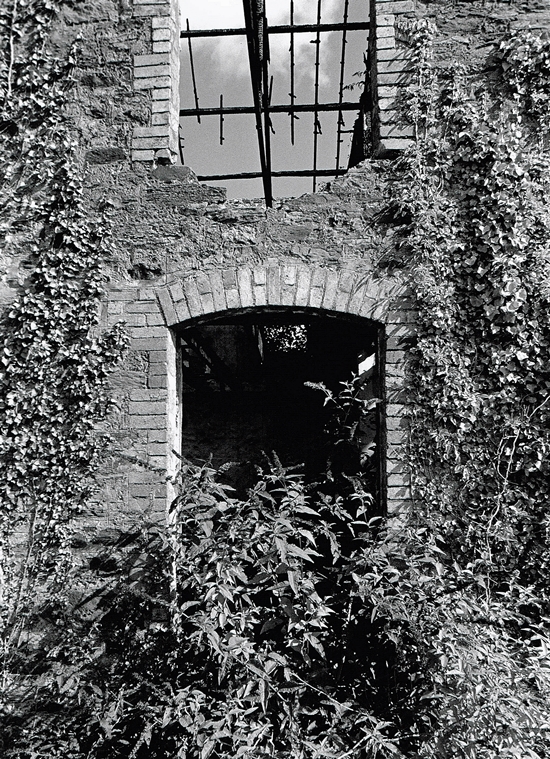 The Bennetts Fuse works was established in 1873, by 1914 the factory employed 250 workers. and grew to be a major competitor for Bickfords. At times purchasing even more gunpowder than Bickfords for use in fuse production. Bennetts were bought out by Bickfords in 1907, and the factory closed in 1923. I wonder what in in store for this building. In it’s present state it can only be marked for demolition. Another loss to Cornish History.

The rest of the images were taken inside the building, hard hats were worn and no risks were taken. Just because there are images here, it does not infer that this area of the Roskear Shaft site is safe to enter. 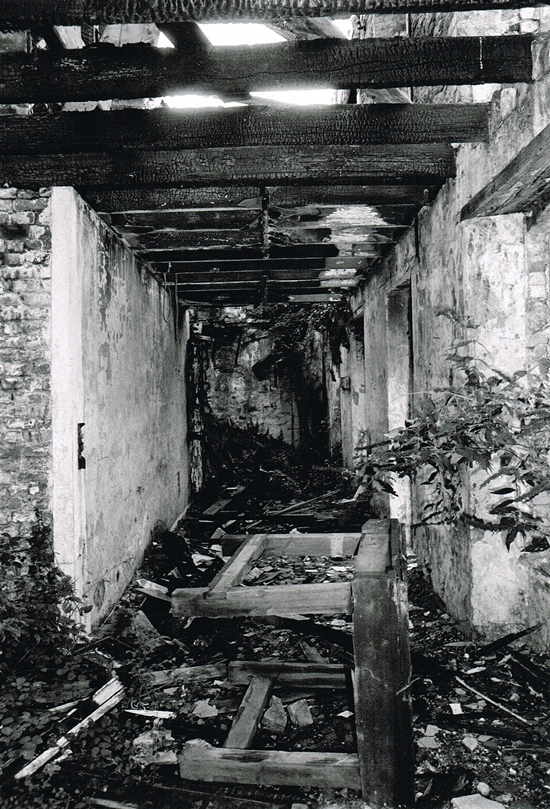 This is the first image of the ruined interior. The floor was covered in debris from the collapsed roof and upper storey. 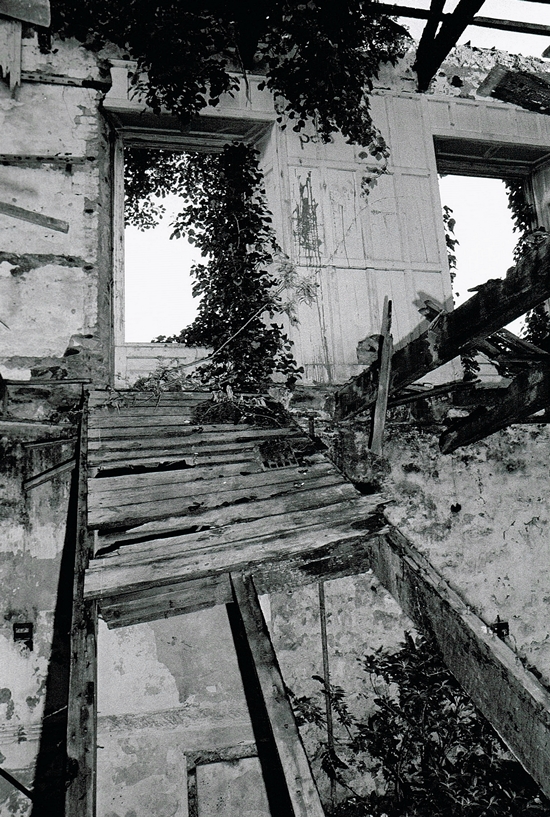 Because of the fine wooden panelling on the wall this shows it was not a building to be ignored. Perhaps this part of the second floor was some sort of meeting room or a persons office. 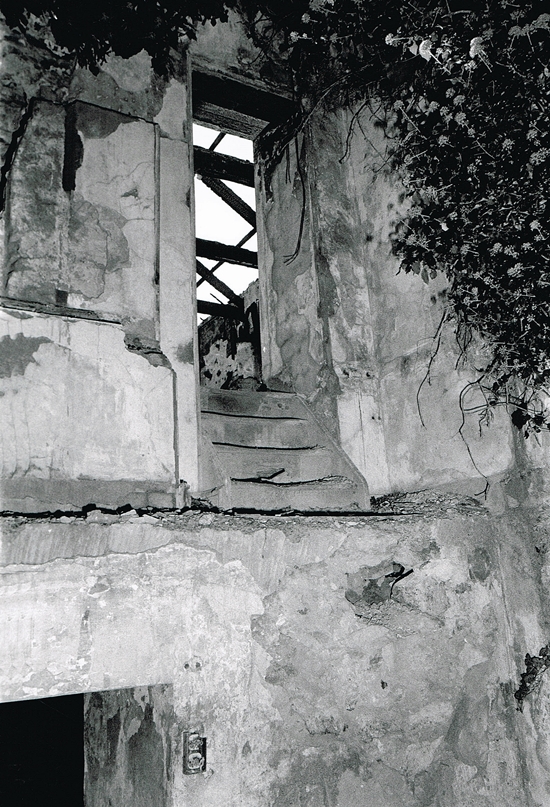 Whenever I see steps like this I cannot help but wonder who has walked up them. The history here was palatable and very moving. Old electric light switches were still on the walls. 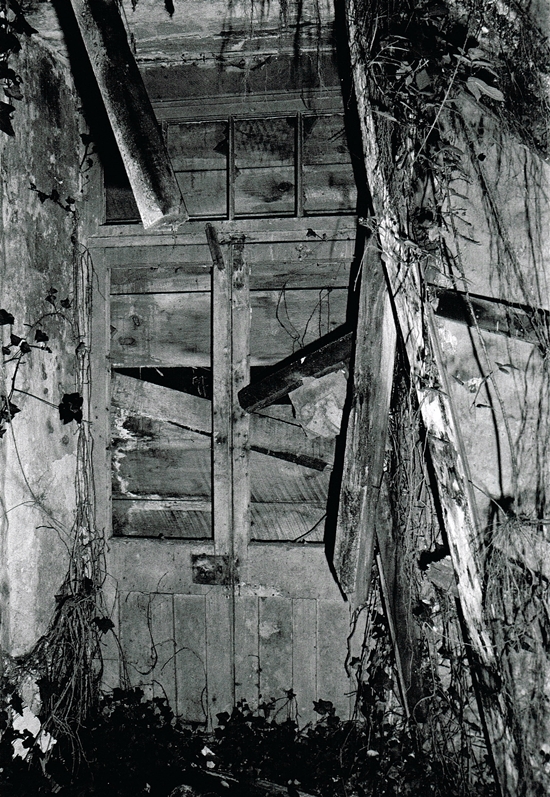 One of the original doorways had survived the fires. Handmade and very high quality timber work. Some of the sash windows still retained their lead weights. 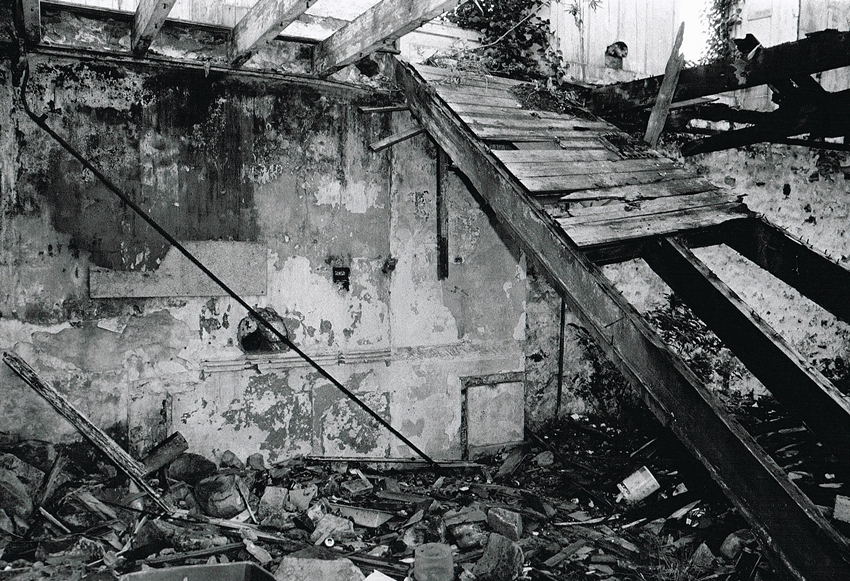 Dado and picture rails are still attached to the walls of the ground floor. Another indication of the quality of the original building. 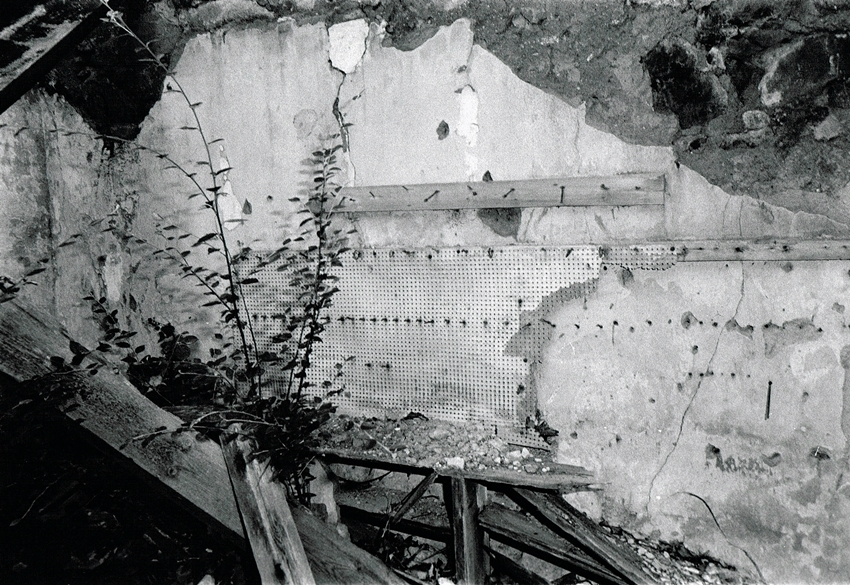 This part of the building appeared to be a small workshop. 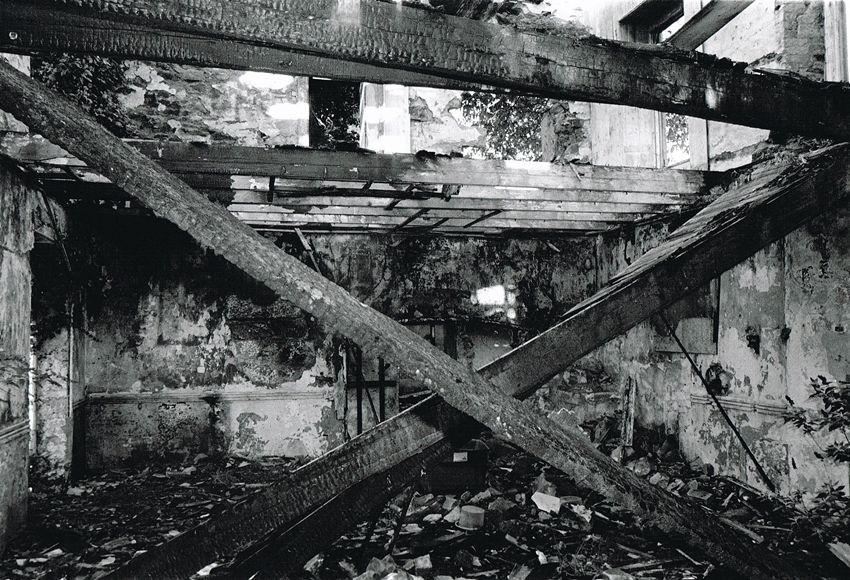 This final image of the collapsed floor beams really shows how far the building has deteriorated. 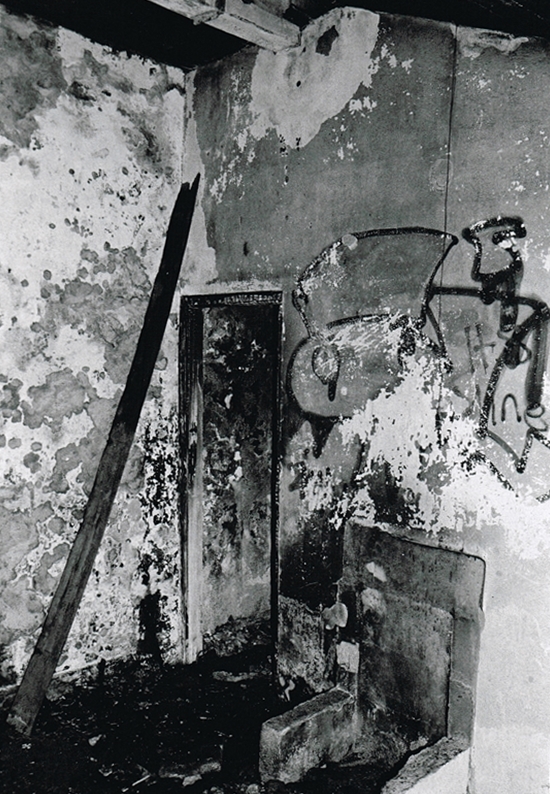 A small building on the other side of the Roskear Shaft site had also been damaged by fire. Sadly so much of the place was beyond repair. 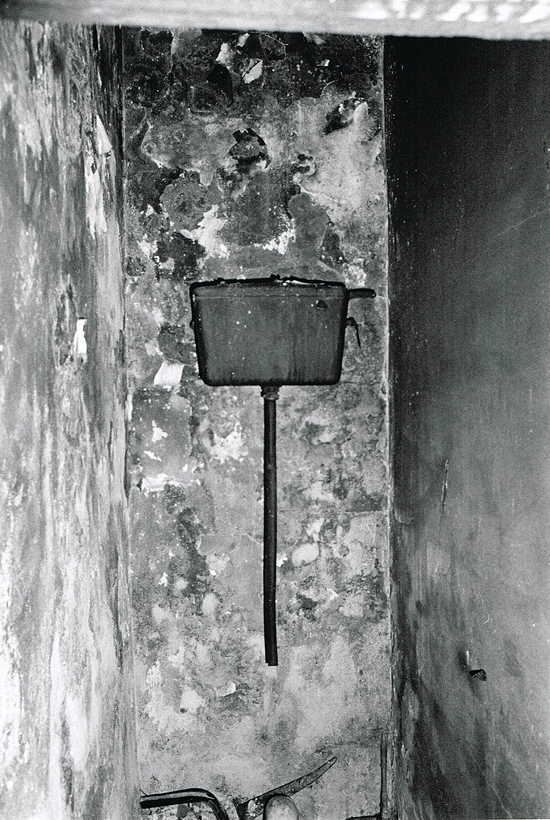 So, I would imagine an awful lot of thinking went on in this little room.

Because of the perilous state of the Roskear Site I must reiterate that the buildings are dangerous and unstable. Because of this they should not be entered.