West Wheal Towan Mine often known as Wheal Tye, is situated along the cliffs from Porthtowan Beach. The square stack on the site is certainly a prominent landmark that can be seen for miles. The remains here date from activity during the 1920’s reworking. 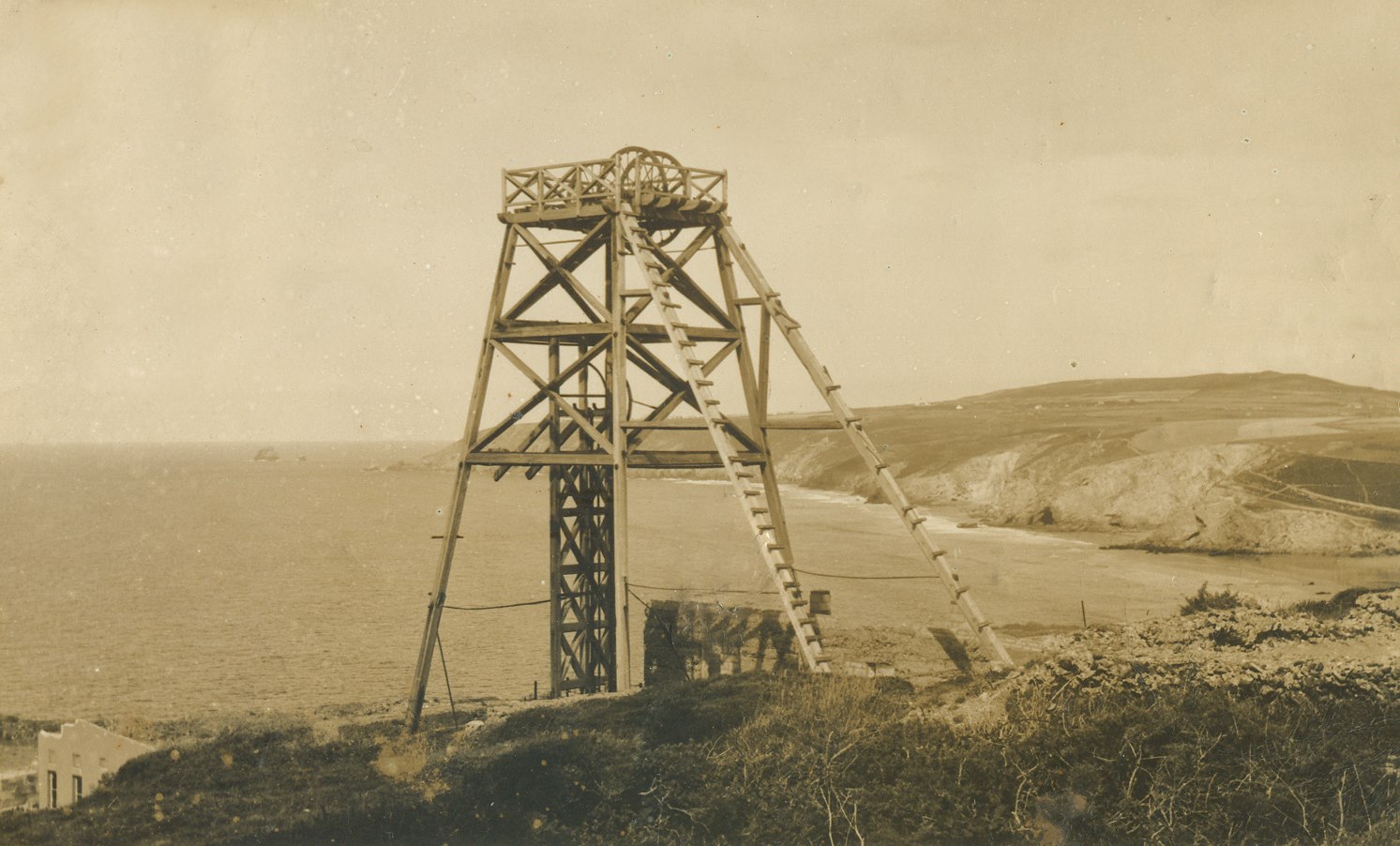 An image showing the headframe over Vivian’s Shaft during the last re-working. This image does not belong to me and I cannot find the correct copyright to attribute.

The area is home to many small mines of the past including: Wheal Vincent, Wheal Fox, Wheal West, Wheal Clarence, Sterran, and Wheal Lushington to name but a few. The cliffs are riddles with adits and many shafts can be seen along that stretch of coastline. 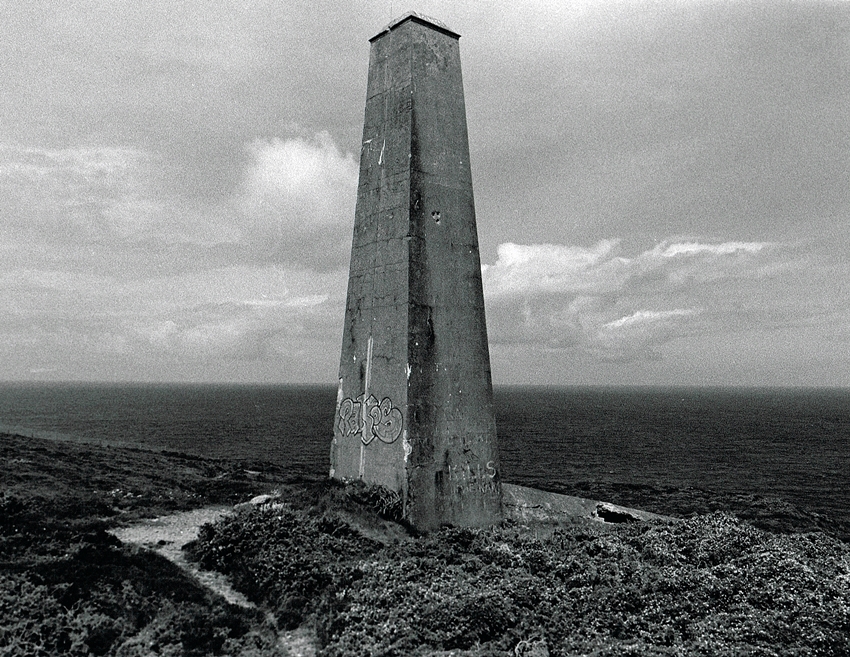 West Wheal Towan Mine 1: The cast concrete square stack at the mine site. In the last few years the area has been stabilised during which the chimney received some needed repairs.

Ben Sumpter local Mine Historian and Explorer has kindly given me some history of the site for this page.

The remains of the concrete stuff there is of the 1921 rework of West Wheal Towan. It was made in connection with Wheal Sally down in the little coomb near Kerriack cove.Wheal Sally sunk an incline shaft for no real reason in the 20s and it’s thought this was done to make some money disappear off the accounts of West Towan. I can’t find the incorporation date of either but West Towan appeared to still be keeping books in 1946 (maybe just a wartime thing?). 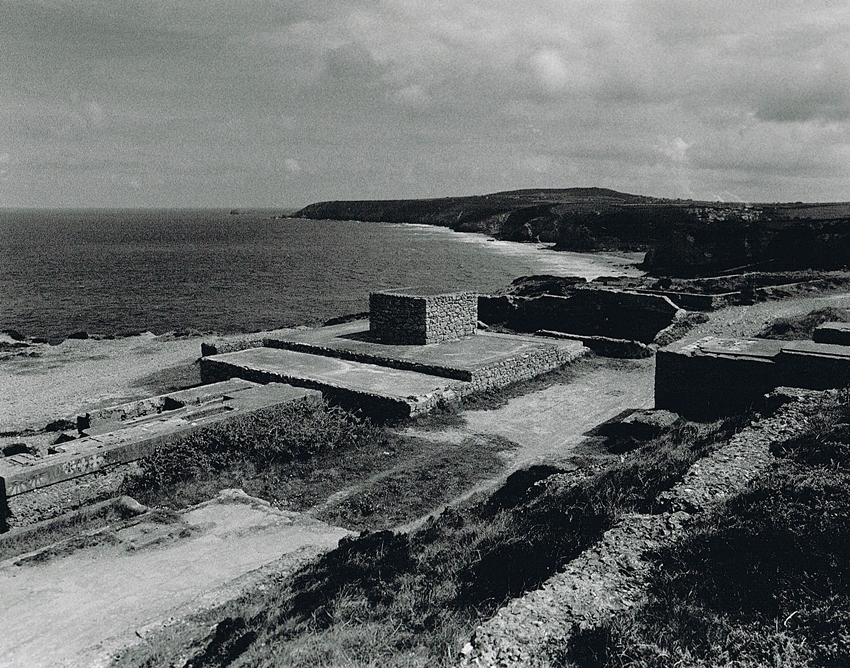 West Wheal Towan Mine 2: The extensive remains on the site. Vivian’s Shaft is covered by a concrete blockhouse, this was 250ft deep where it intersected “old workings”.

The works on the headland are very old though. The coast between Portreath and Porthtowan was always known as Nancekuke cliff. No recorded named exist for any of the many interesting coves and coastal features where you would expect them to elsewhere. The commons were left as waste or moorland prior to the mid 19thC. 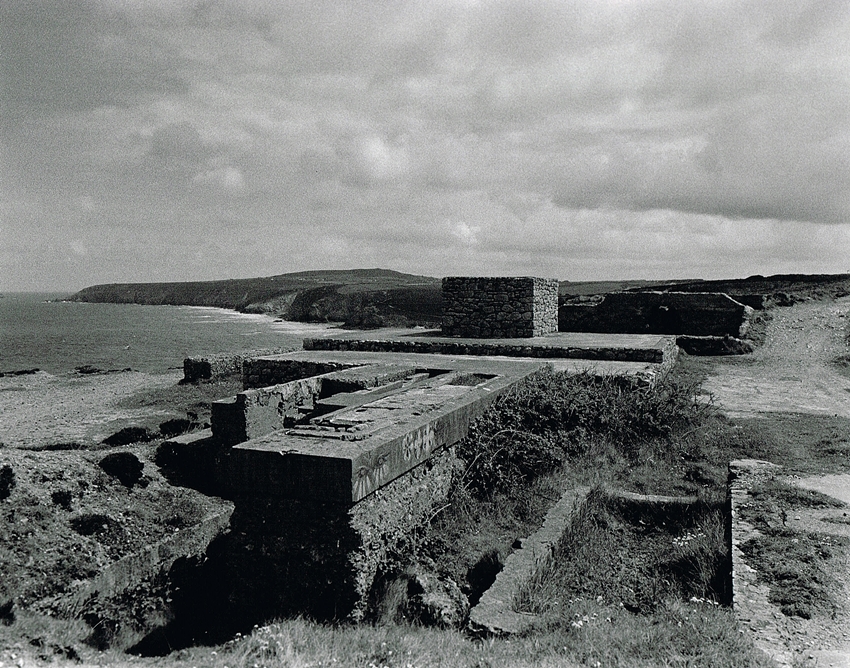 West Wheal Towan Mine 3: This image is of the loadings for a Rotative Pumping Engine. The shaft blockhouse is directly behind.

Mining is first hinted at in the 1580s when a nationwide for non-lead/silver metals were prospected for on request by the queen. Copper being found in the cliff of “Luggan” seems to suggest this area. Tin mines for all accounts came along later, but were very productive. 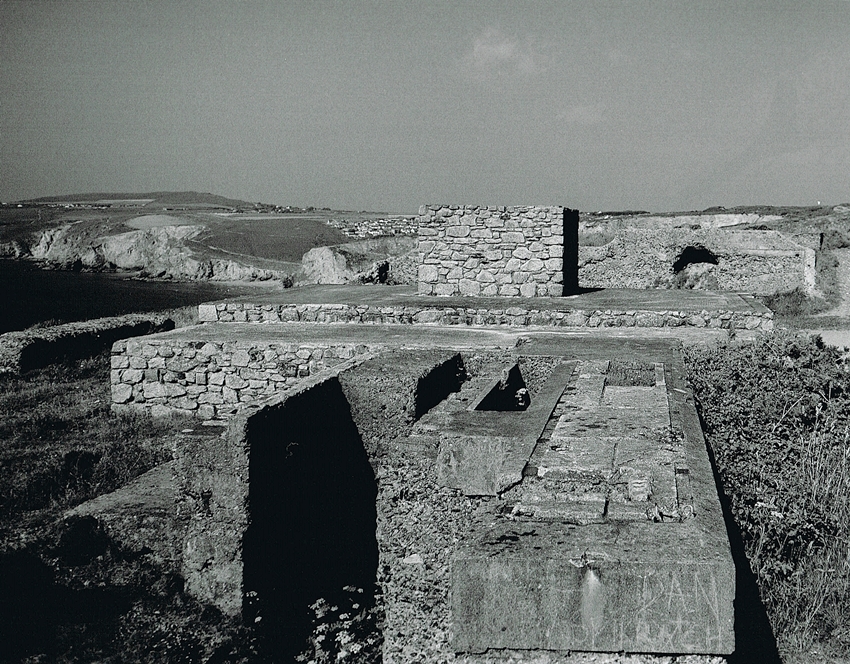 West Wheal Towan Mine 4: A closer image of the loadings for the pumping engine. The slots in the concrete foundations indicate where the drive wheel would have been situated.

There are many accounts of the group of Tin bounds we know today throughout the mid 18th Century such as: “110 sacks of Tin ore sold from Wheal Sterran, Wheal West, Wheal Tye, Wheal Fox – all in Nancekuke downs, Feb 27 1760” 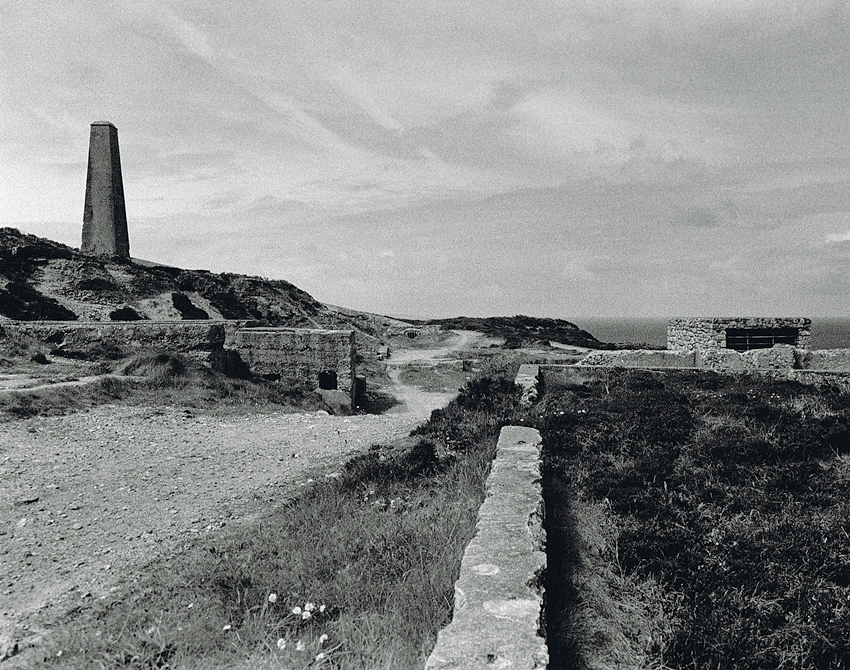 West Wheal Towan Mine 5: This image is taken from the other side of the site looking towards the square stack. The shaft blockhouse with grille is on the right of the image.

The name Sterran could be a bastardisation of “Starne” or “Star” meaning saddle but often applied to offshore little islands of rock. For example here; That there is the Pennals Star, which may be a corruption of Starne. 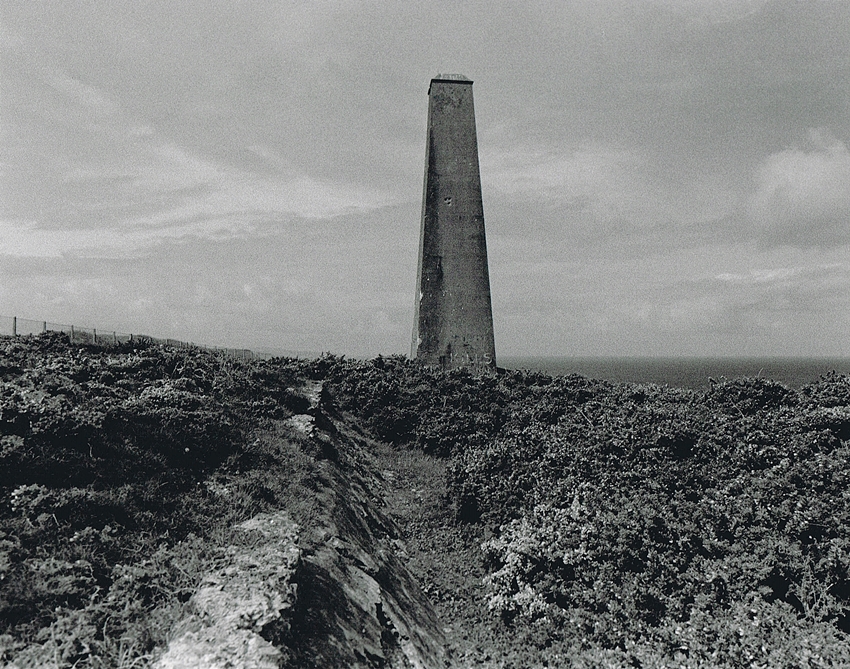 West Wheal Towan Mine 6: The square stack taken from the top of the site. The area in front of the camera was possibly a small reservoir for the mine.

Wheal Tye means “Work of the Adit”. It indicates the adit at the back of the sea cave (Philip’s Cavern) was driven very early, even by the 1750s. Kerriack Cove or more “Carrack” means “Rocky Cove”. 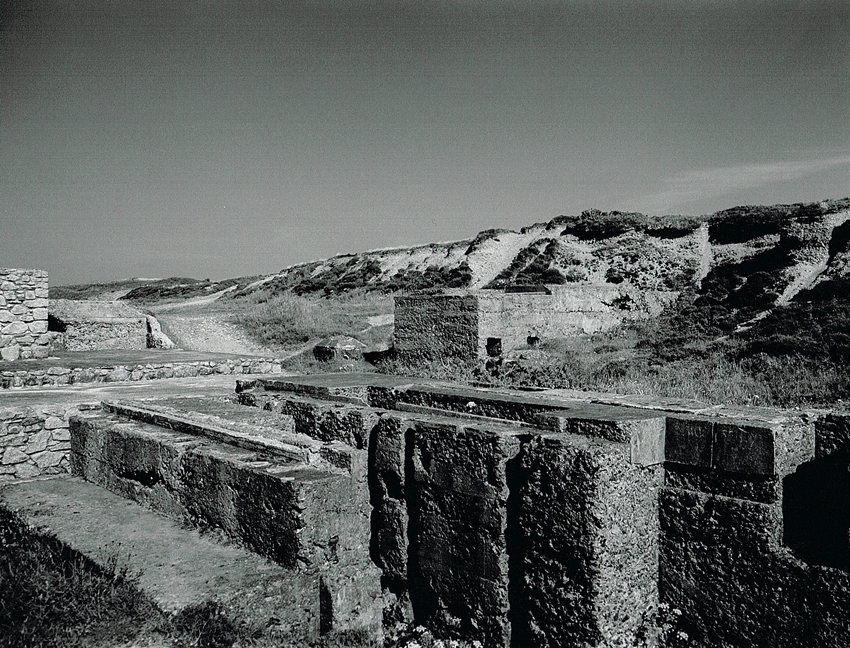 West Wheal Towan Mine 7: The whole site contains many concrete foundations. In the foreground are the loadings for the pumping engine.

Presumably none of the other coves have names because they weren’t suitable for fishing. 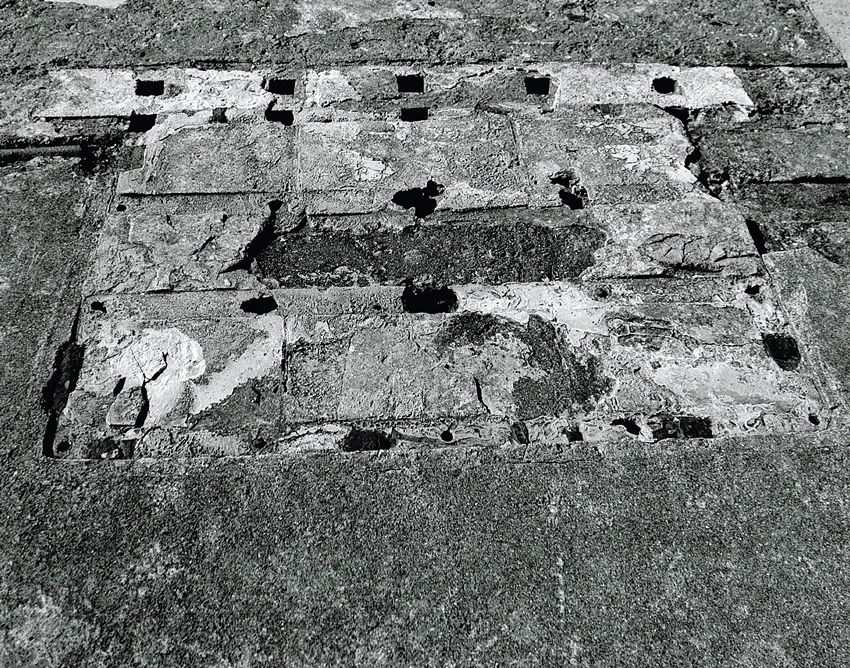 West Wheal Towan Mine 8: More concrete foundations on the site, The fixing holes for the machinery can be seen. 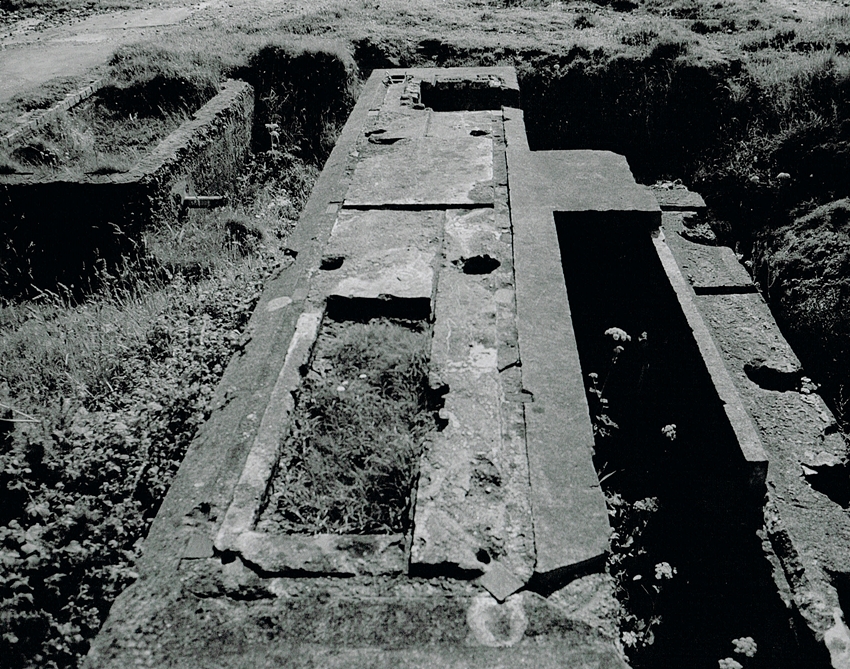 West Wheal Towan Mine 9: A detailed image of the loadings for the pumping engine. The slot for the fly wheel can be clearly seen on the right. 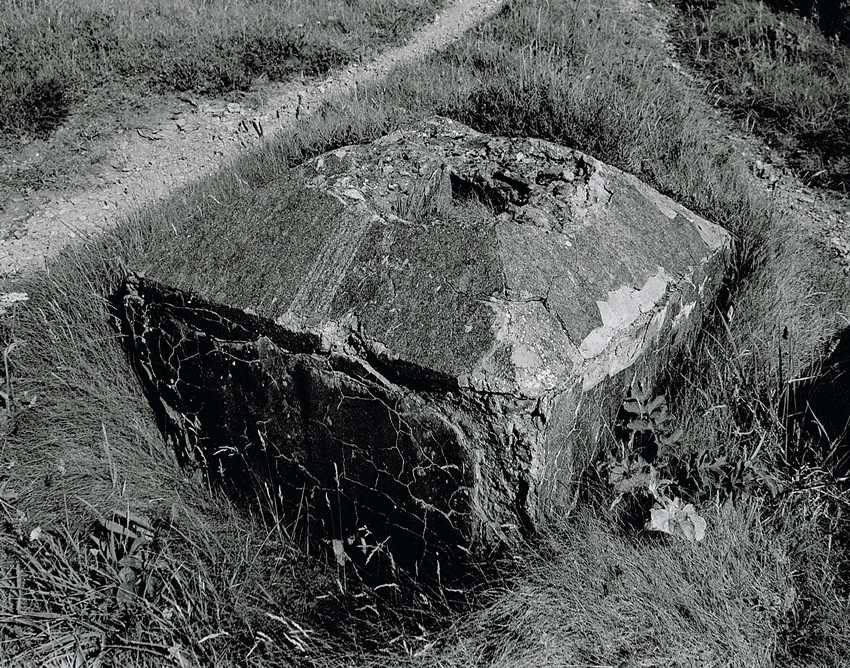 West Wheal Towan Mine 10: Certainly a rare survivor on any mining site.  This is a well preserved concrete support for one of the legs of the headframe that stood over the shaft.

West Wheal Towan Mine 11: The remains of a small fireplace. This is one of the rooms which made up the mines Count House situated near to the shaft. 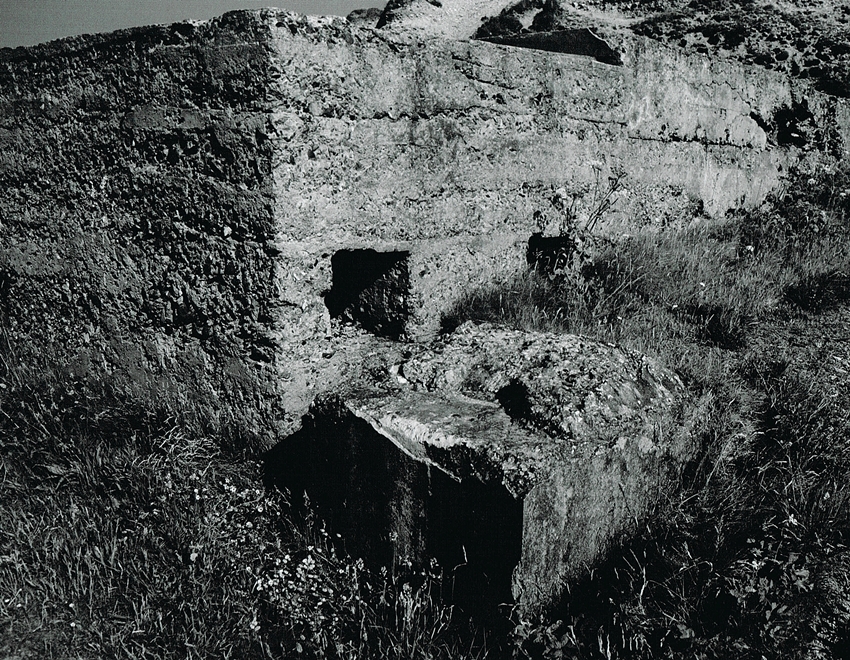 West Wheal Towan Mine 12: These foundations were for a Horizontal Steam Winding Engine used to lower the miners down the shaft. Tucked in beside them was another of the concrete supports for the headframe. 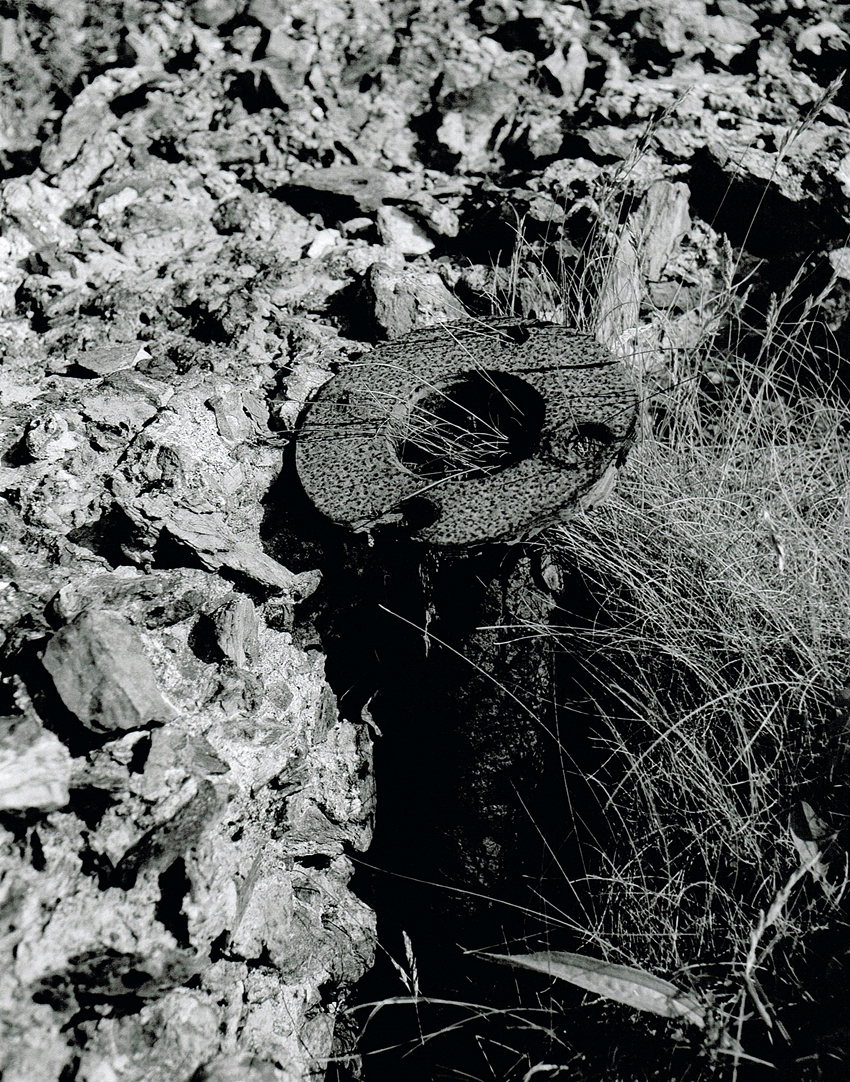 West Wheal Towan Mine 13: Its quite amazing what can be found when examining a site. This rusting pipe was possibly connected to an air compressor. This would have fed underground into the workings to power rock drills. 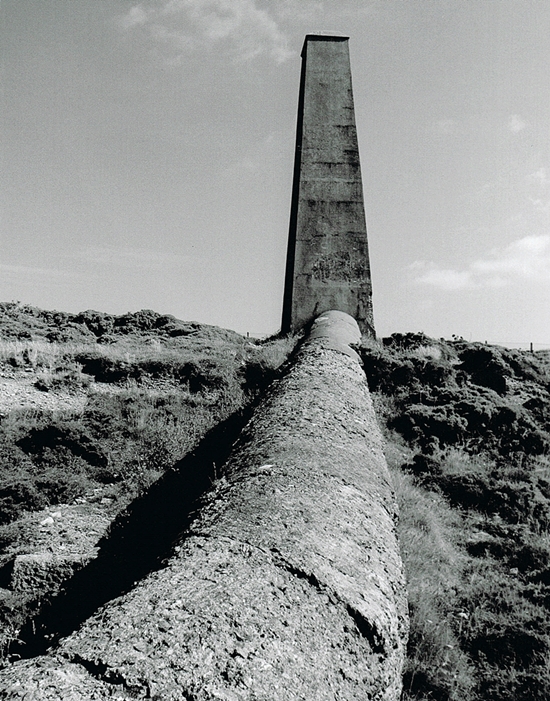 Wheal Towan Mine 14: This image is of the long concrete flue which leads to the distinctive square stack.

There are a few more details on the mine to be found here “Wheal Towan”. 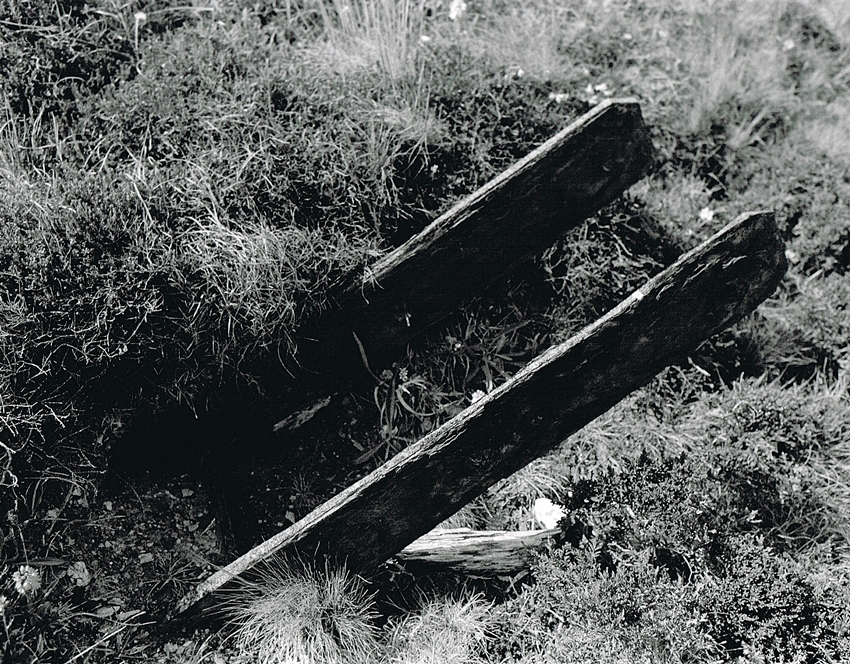 Wheal Towan Mine 15: The final image on this page. Down the steep slope away from the mine I was lucky enough to find this. Poking out of a pile of mine waste were the remains of a small pumping rod. The internal timber has long since rotted away, however the metal bracing still remains.

Finally I would like to thank Ben Sumpter for the historical information on this page. The site has consequently been stabilised to preserve the remains.