Poldark Mine Museum is located near Helston in the heart of the Wendron Mining District. The museum grounds cover four acres In the River Cober valley, once famed for its Tin Streaming industry. The museum boasts an underground tour in Wheal Roots an C18th Tin Mine. Set on several levels it’s a glimpse into the industrial history of Cornwall.

The centrepiece of the collection is the the Greensplat Cornish Beam Engine which was the last beam engine in commercial service, it worked until Christmas 1959. Originally built for the Bunny Tin mine in 1846 by Harvey’s of Hayle, in the 1880’s it was moved to Greensplat Pit in the centre of the Clay Area. It was moved to Poldark Mine in the winter of 1972.
To visit Poldark Mine Website: Follow this Link A view of the Poldark Mine visitors entrance to the underground mine tour reception room. The core of this old wooden building was the first on the grounds. Formally used as an office and later a showroom for crafted items made at the workshops. It dates from before the collection of industrial machinery was first opened to the public on June 1st 1970.
The bronze bell on the headgear is dated 1771 and was in the original town clock tower at Redruth. It was refurbished c1946. The bell and the Town Clock’s mechanism from 1903 were presented to Holman Bros. These were at the Holman Bros museum until 1979 when transferred to the Cornish Heritage Collection together with the extensive collection from the Camborne Museum. 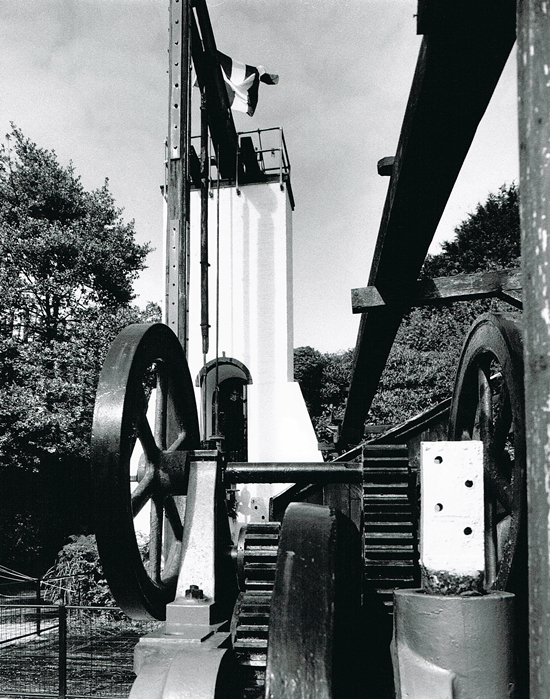 Cam and lever punching and shearing machine. This was used for ships plate rivet hole, punching and plate cutting at Falmouth Dock & Engineering Co. until C1986 when presented by FD&EC to the Cornish Heritage Collection. Capable of cutting & punching 1.5 inch plate. 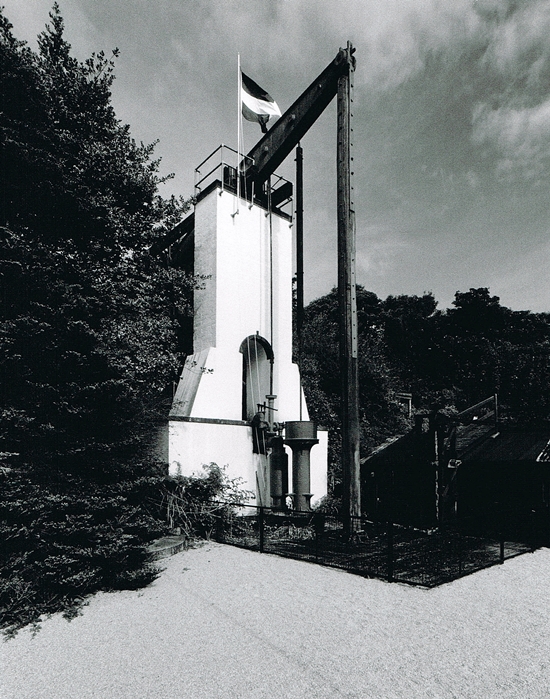 The centrepiece of Poldark Mine. The preserved Cornish Beam Engine by Harvey of Hayle c1846 for the Bunny Tin Mine, 30 inch cylinder with 8 foot stroke. Subsequently moved to Greensplat China Clay Pit. 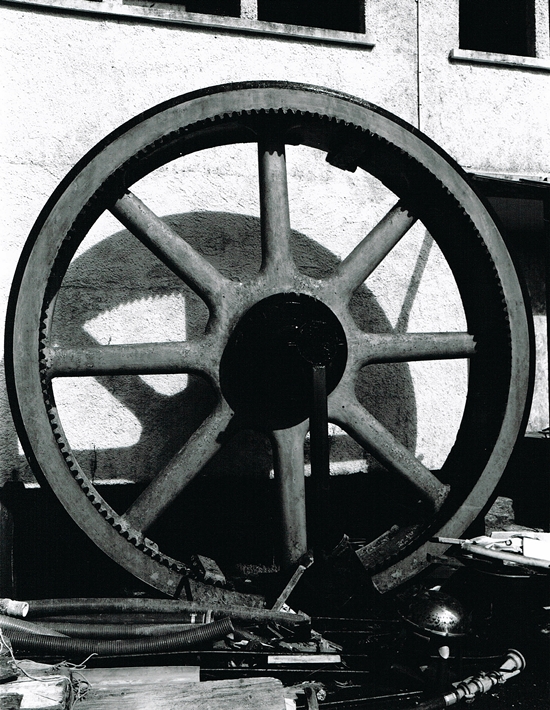 This huge wheel at Poldark Mine is from the Bathford Paper Mill engine near Bath that was made in 1912. It has a diameter of 13 feet and weighs around 18 tons. It was given to the museum by Mr Michael Tabbs. The wheel is cast in two halves and bolted together with massive bolts. Michael’s grandfather had ordered the engine in 1911 from Wood Brothers of Sowerby Bridge. It served the mill well and in 1974 it was given to Peter Young who intended that it would be re erected at what was then Wendron Forge. It arrived here at the same time the mine was discovered and as a result there was a shortage of funds and it seems that the engine itself was scrapped. We have recovered some items that were found in various places, namely the duplex vacuum & steam gauge and a recording device. The latter is on display in the office and the gauge is in store at present. We also know where the governor is in another museum. 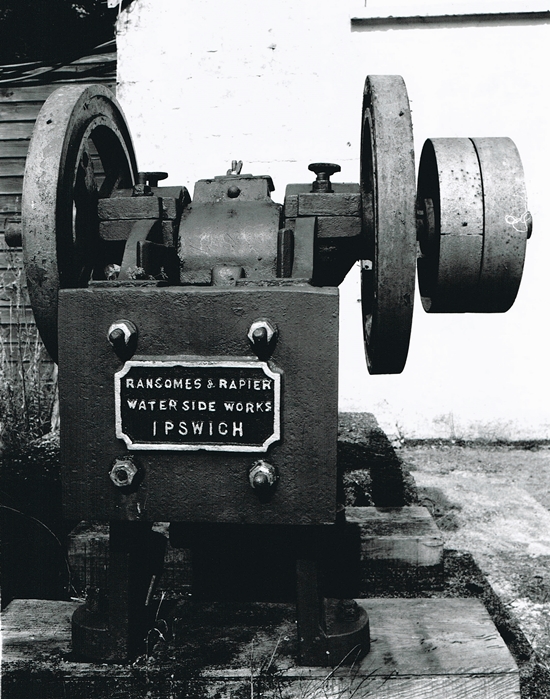 A Ransomes and Rapier belt driven stone crusher at Poldark Mine.
Made In Ipswich – we do not have any information on this machine, but it is in working order. It seems to date from the late 19th Century. 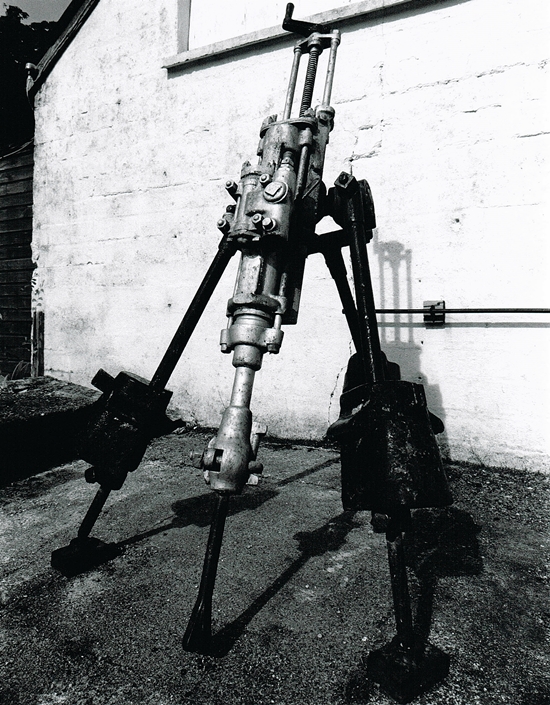 This is a Holman Tapett Rock Drill. It was made circa 1898 and is from the Holman Museum – it won an award at the time. We have more details but regret that they are not to hand at present.
There is another almost identical survivor in an art exhibit in Birmingham. “Rock Drill” comprises a plaster figure perched on top of an actual Holman rock drill. This is a 1974 reconstruction or Jacob Epstein’s 1913-1916 original work. The copy is by Ken Cook and Ann Christopher and is part of the Birmingham Museum and Art Gallery’s collection.

The next few images are of the preserved Cornish Engine on the Poldark Mine site, taken on the drivers platform. Historically important, as this example is the very last engine to have worked commercially in Cornwall. Steam was turned off during Christmas week 1959, moved to the Cornish Heritage Collection at Wendron Forge in 1972 by a team of volunteers. Possibly the final Cornish engine to be moved and re-erected. The driver’s chair and some steam gauges survive at the museum. 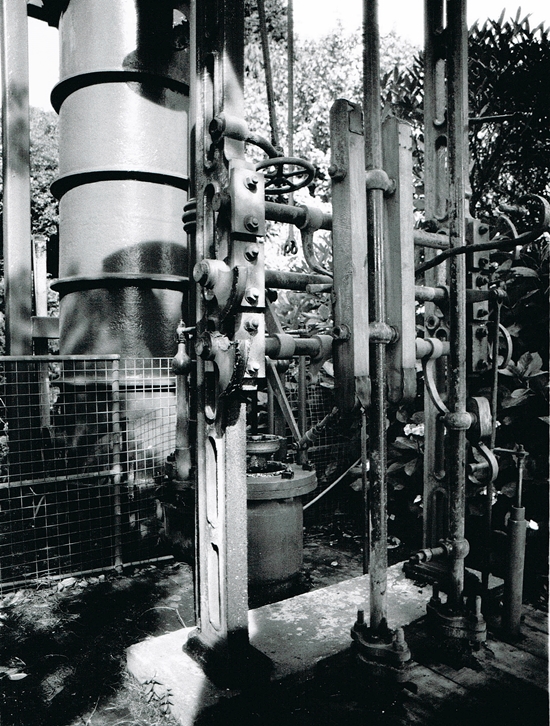 The driver’s position with the engine cylinder in the background at Poldark Mine.
The Bunny Tin Mine Rotative Beam engine control or driving platform. Built by Harvey’s of Hayle c 1846, a 30 inch cylinder by 8 foot stroke. It was moved to Greensplat China Clay Pit in the late 1800’s and converted to a pumping engine, the wheel had been used for another engine nearby. It pumped 400 gallons of slurry a minute at Greensplat Pit located close to the village chapel. The engine was moved from the village of Greensplat {which was wiped off the earth} to what was Wendron Forge (Poldark Mine) in the winter of 1972-1973. The crane & move cost £8000, along with six months work by a team of volunteers. The cost today would be in excess of £110,000. 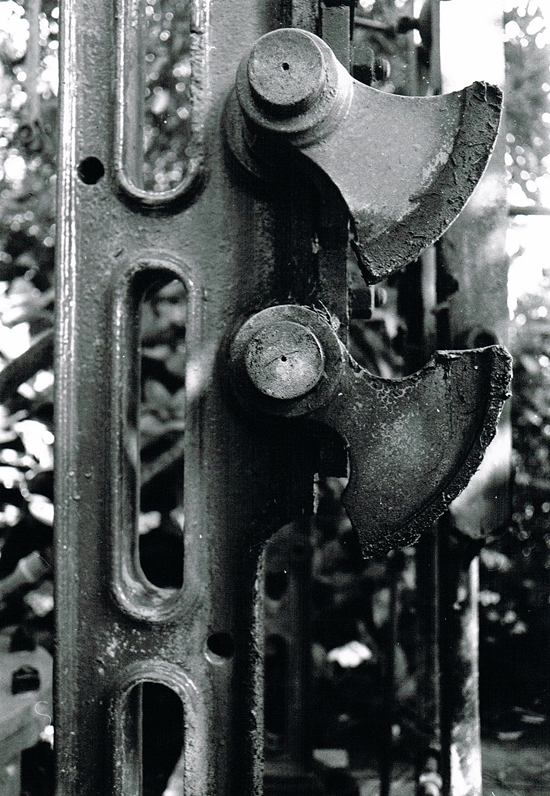 A closeup of the cams at the driver’s position.
This was the very last beam engine to be in commercial service in Cornwall. Steam was shut off in Christmas week 1959 – beating all other similar claims by some five years. This was probably the last engine to be moved and re erected in Cornwall. The Grade 2 Listed engine house was delisted by the council and sadly demolished in 2002. 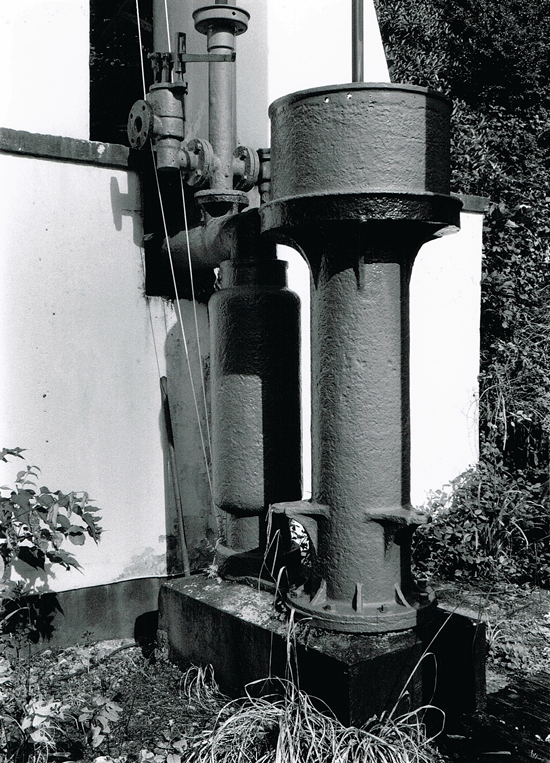 The cylinder to the rear is the condenser of the Bunny Tin Mine Cornish Beam Engine, in front is what is known as the Air Pump.

Spent steam comes down the equilibrium pipe to the condenser and the condensate is then pumped from by the Air Pump into the water cistern called the hot well and allows any air to escape to atmosphere. Some water is recycled by a circulating pump from the condensate and used for the boiler. This pump can be seen above the rear condenser. Both of these items would normally be submerged in a water tank, often made of wood and called the Hot Well.The various pumps are all operated by rods connected to the main beam at suitable locations. These rods are accessed from the plug door.

Crofton Engines (there is a Harvey Engine of 1846 there and the original non Harvey was rebuilt with Harvey Controls, the pair sit side by side. – Crofton explains as follows:- At the top of the stroke, the equilibrium valve closes and the exhaust valve opens. At the same time, the inlet valve opens to permit admission of another shot of steam. When the exhaust valve opens, a jet of cold water is injected into the condenser chamber which is connected to the exhaust system, causing the steam under the piston to condense, thus producing a vacuum. On the next power stroke the difference of pressure between the steam above, and the vacuum below causes the piston to descend. In this way, the steam injected into the cylinder is used twice and is then recoverable as clean, warm water to replenish the boiler. The condensed water in the condenser chamber is extracted by means of the Air Pump (so called because there is also air in the condenser and the pump extracts this as well). The Air Pump discharges the condensed water into the Hot Well which is the boiler feed reservoir. The condenser chamber and associated pumps are contained in a tank of water to keep them cool. 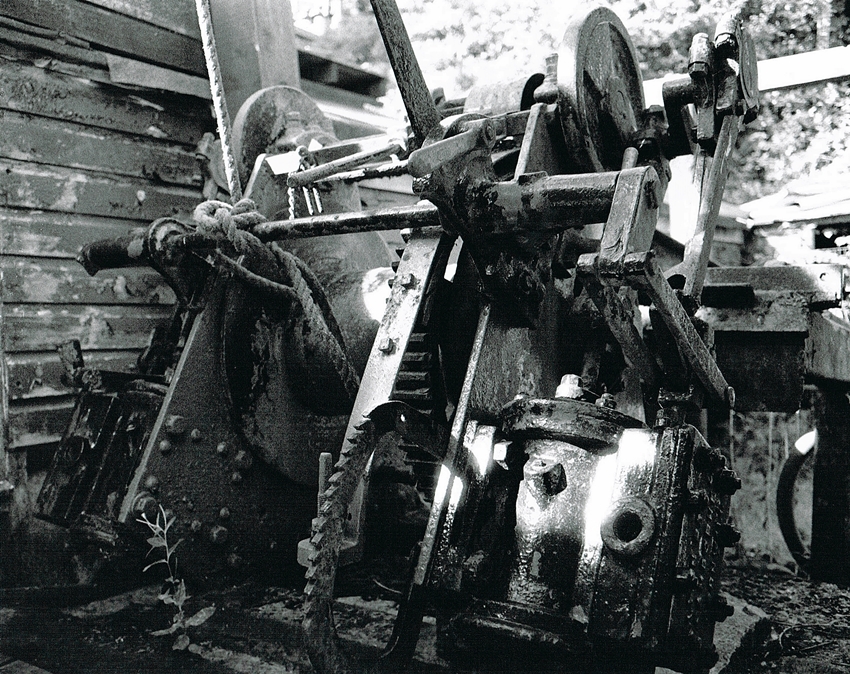 A Holman Bros two cylinder winding engine or winch circa 1910. This can be dismantled in smaller parts to be taken down the mine. Also it can be air or steam operated and once served at South Crofty Mine – from the Holman Museum. A slightly larger machine is above the Poldark Mine entrance. 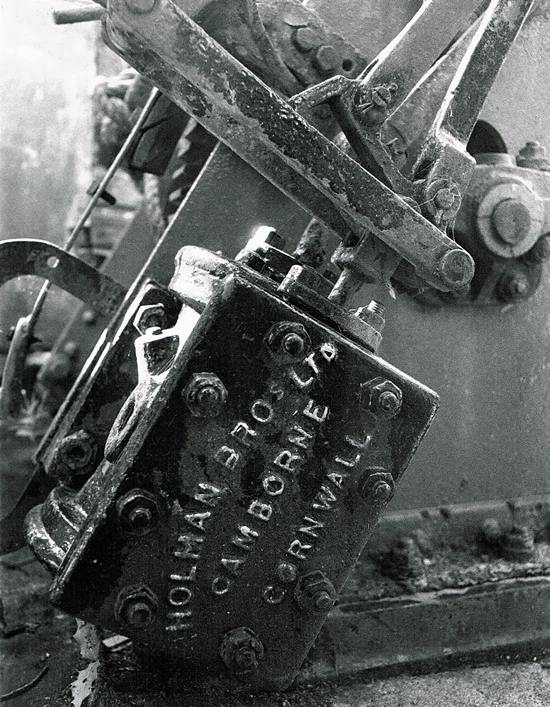 A closeup image of the makers plate on the winder at Poldark Mine. 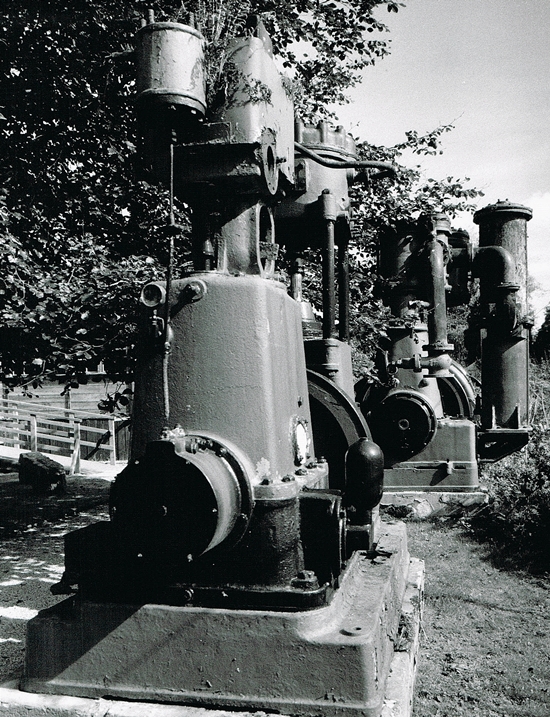 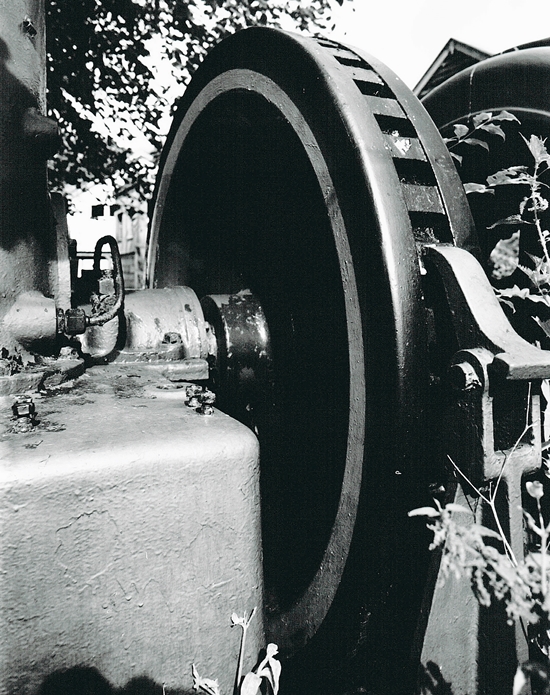 This is the flywheel in the centre of the GEC electrically powered Belliss & Morcom air compressor from ICI Billingham on Sea former government Nitrate Plant set up in WW1. 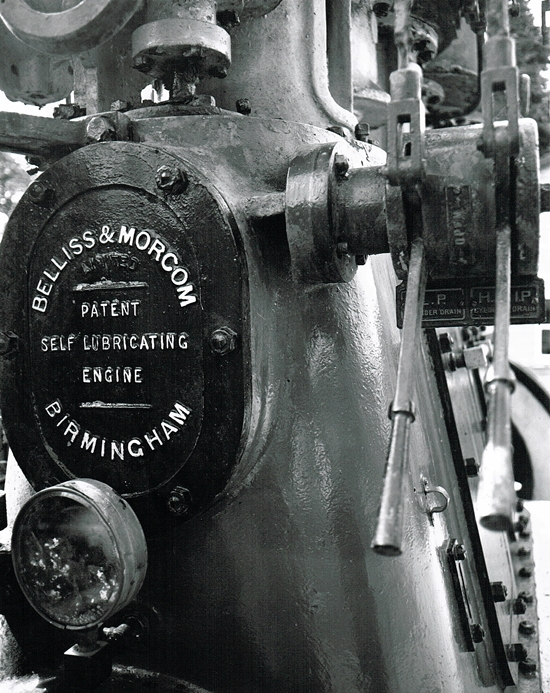 This image is the driving end of the Belliss & Morcom Triple Expansion Engine from Newton Abbot Power Station – dates from around 1924 or before? It originally used to supply DC power to the Torquay Tramways, this engine was later retained on standby in case the more modern AC supply failed. 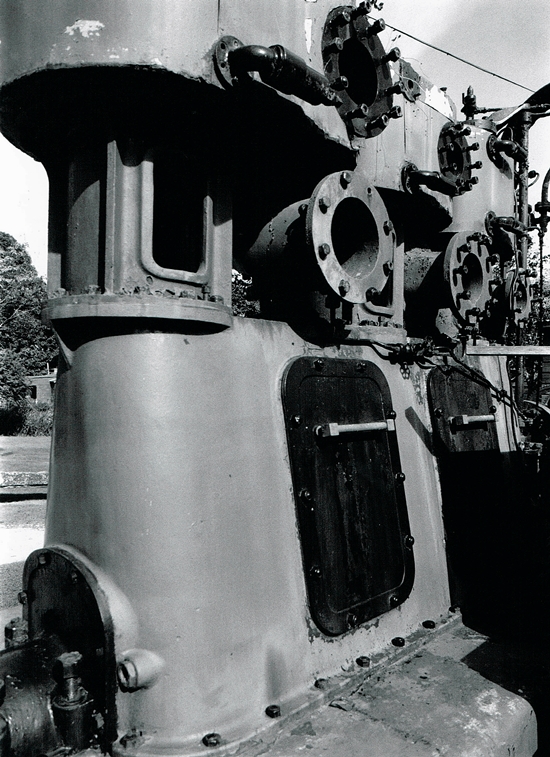 Another image of the Belliss & Morcom Triple Expansion Engine. This is identical to several machines that were used for power generation at a number of mines in Cornwall.  Polhigey, and others in the area and the tramway from Camborne to Redruth – the power station was where McDonalds is in Poole, the power company retains an adjoining depot. There were two of these side by side. This is No 1. Its sister engine was scrapped when the station was re-equipped with AC generators. The bed of No 2 used for an AC to DC rotary converter which allowed a supply for two hotels in Newton Abbot that needed DC current for their ancient elevators. The station closed in 1972 under SWEB ownership. It had a 200 kw DC generator attached. This fed an open 500 volt switchboard with two feeder connections to hotels in Newton Abbot. There was a 600 amp battery bank associated with the DC switchboard to provide emergency supplies. This supply remained available until the mid sixties. 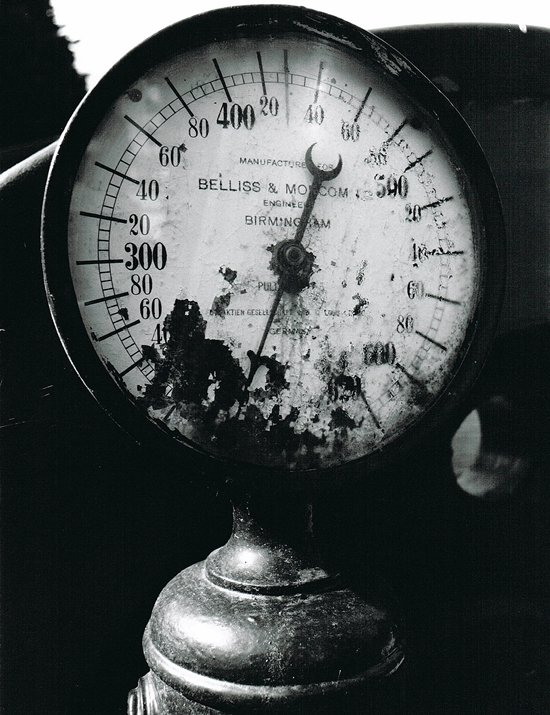 The gauge attached to the Belliss & Morcom Triple Expansion Engine. 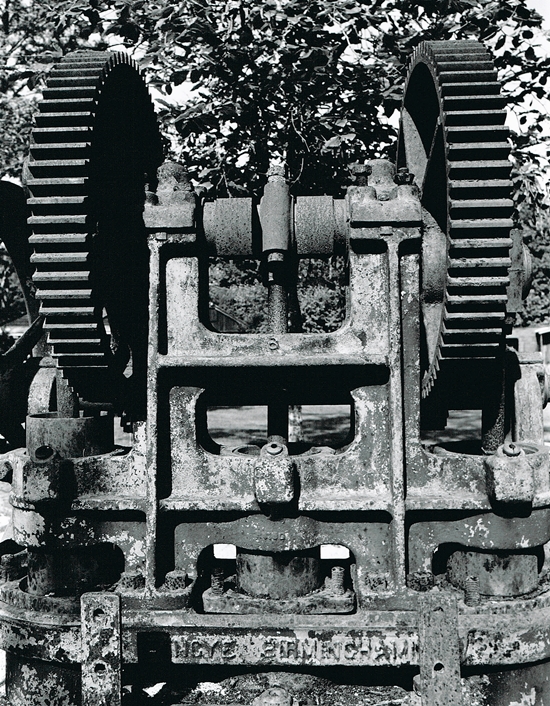 This is a Tangye belt driven three cylinder water pump. Ironically its one of the best condition items sitting outside, there is a smaller Tangye pump alongside. The two came from Menagissey water pumping station near Porthtowan (not to be confused with Mevagissey) These were the last mechanical pumps in use by the Water Board according to Peter Young’s notes. (Former owner of Poldark Mine)

Poldark Mine would like to get this indoors and restored, perhaps working with the  Donkin Steam engine in the museum that was restored recently by Cornwall College. Sir Richard Trevithick Tangye (1833-1906) was a manufacturer of engines and other heavy equipment. He was was born at Illogan, near Redruth, Cornwall, educated at the Quaker School at Sidcot, Somerset and later taught there. Tangye moved to Birmingham in 1842 and started business there in 1846 as a hardware factor and commission agent. His first customers were the Cornish mine-owners in the Redruth district.

In March 1857, Richard Tangye, with brothers James and Joseph, started a manufacturing business in Mount Street Birmingham under the title of James Tangye and Bros. Principally manufacturing hydraulic appliances and lifting jacks, Tangye jacks were successfully employed in the launching of Brunel’s steamship SS Great Eastern. Tangye said of the project: “We launched the Great Eastern and she launched us”.Richard Tangye and his brother George were founding benefactors of Birmingham Museum & Art Gallery in 1885 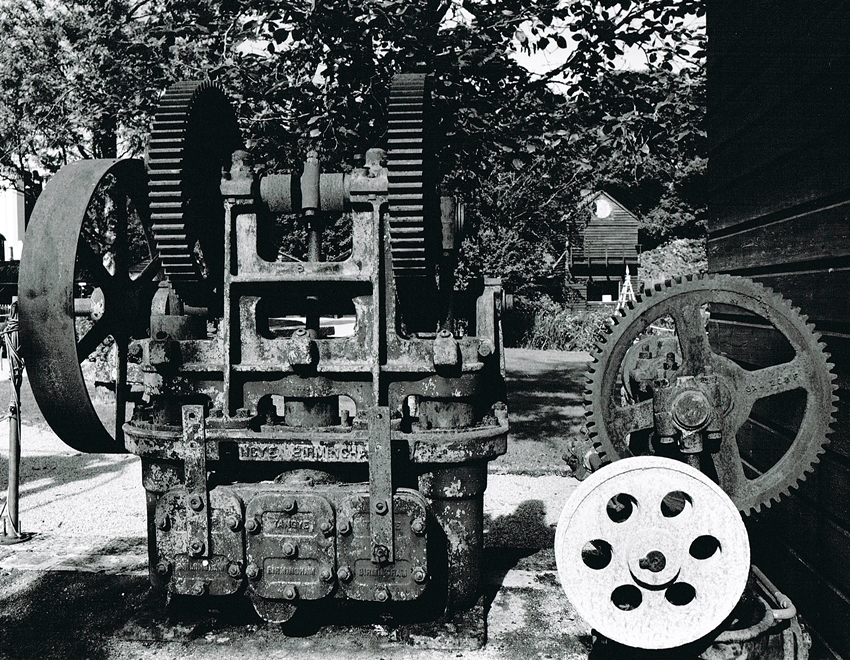 A wider view of the Tangye belt driven three cylinder water pump. The second pump is on the right of the image. 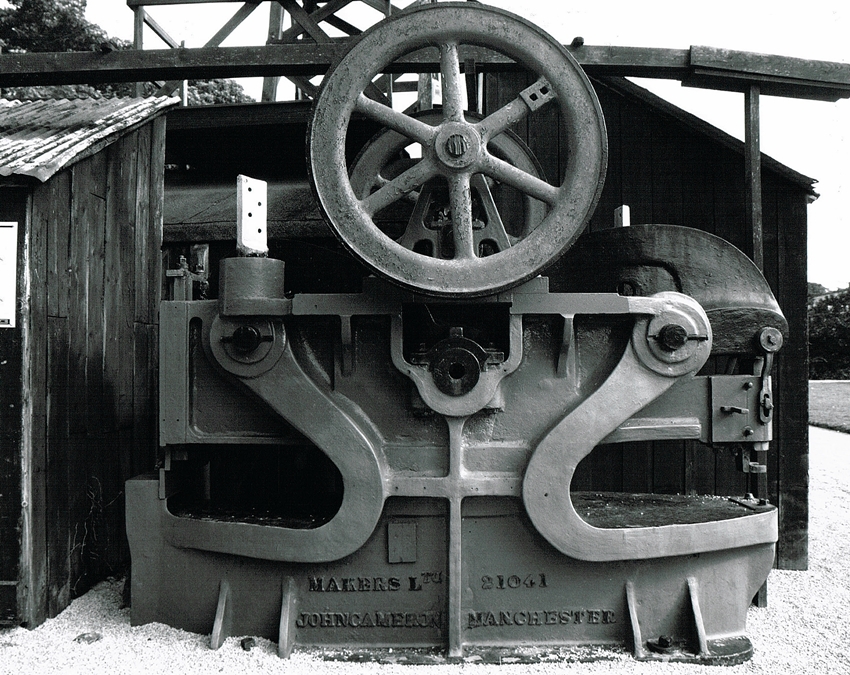 The final image on the Poldark Mine page is a wider view of the Cam and lever punching and shearing machine outside the visitors entrance to the underground mine tour reception room.

The Poldark Mine museum is well worth a visit, Tracy and I have spent a few happy hours there just wandering around. The underground tour is not to be missed, the 18th century mine workings of Wheal Roots give a valuable insight into Cornish Mining.The mine is currently (May 2018) the only one is Cornwall that is pumped below the water table. Approximately 20 million gallons of water a year are pumped from Poldark Mine at a large expense to the owners.

My sincere thanks to “The Cornish Heritage Collection at Poldark Mine” who supplied the information on the images and granted me permission to photograph the site.