Great Wheal Busy was formerly Known as Chacewater Mine. Tin was mined here from the 17th Century onwards. One of the most important periods for the mine was from around 1815 to 1870. Initially Copper was produced but from the mid 1850’s Tin was the main production. In 1856 Harvey’s Engine House was erected to hold an 85″ Pumping Engine. 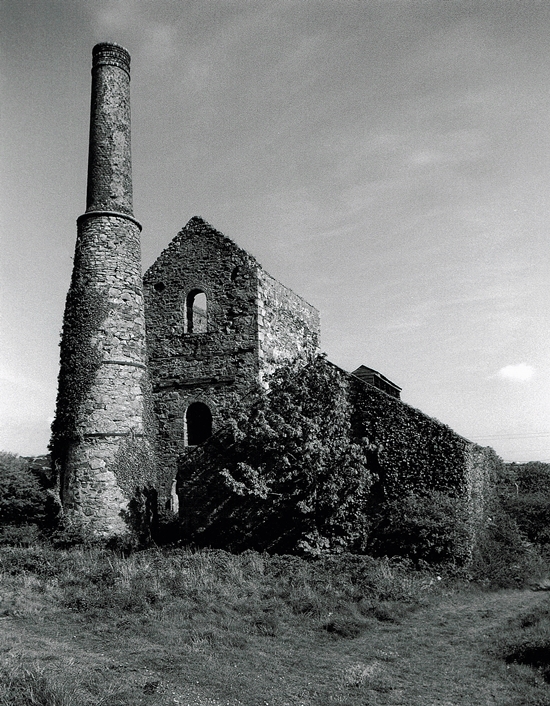 The mine steadily expanded to take in neighbouring setts, subsequently it was renamed to Great Wheal Busy United. After ten years of working the original engine was sold off when the company moved most of its operations to the eastern part of the mine. Great Wheal Busy 2: The inside of the Engine House with the chimney in the background. The  location of the floor levels can be clearly seen.

In 1872 the house was once again in use hosting a 90″ engine. This was set to work to drain the old workings to allow re-investigation and development. However, this was a short lived attempt. Because of the Tin price crash of 1873 the mine was forced to close after much investment in the older sections. However mining was still carried out on a small scale in the last years of the 19th Century for Arsenic from the levels above adit. 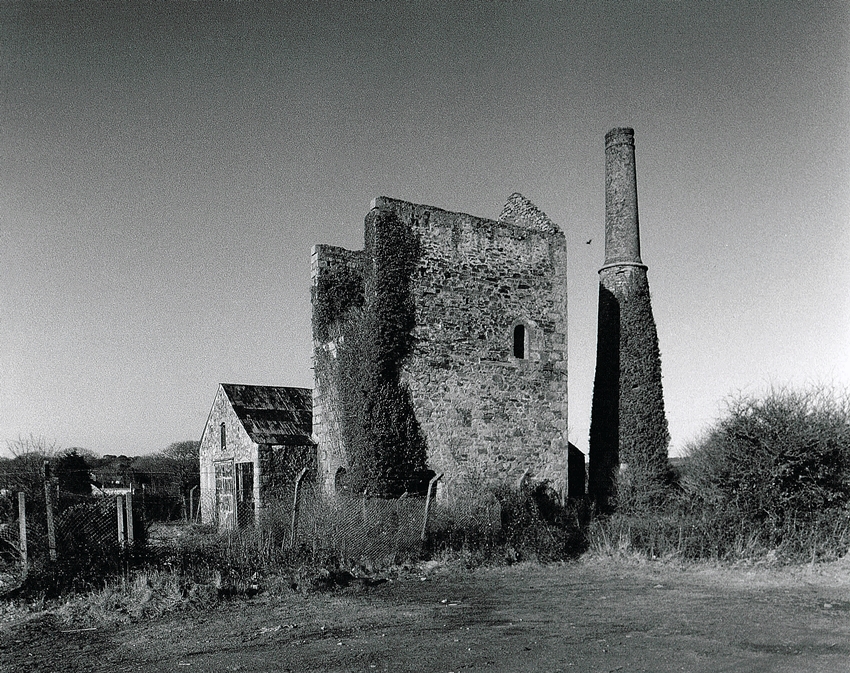 Great Wheal Busy 3: The impressive 85″ Engine House showing the fine chimney and the Boiler House on the left. Great Wheal Busy 4: At this time the Boiler House was used for storage, in the foreground are the remains of some associated buildings. 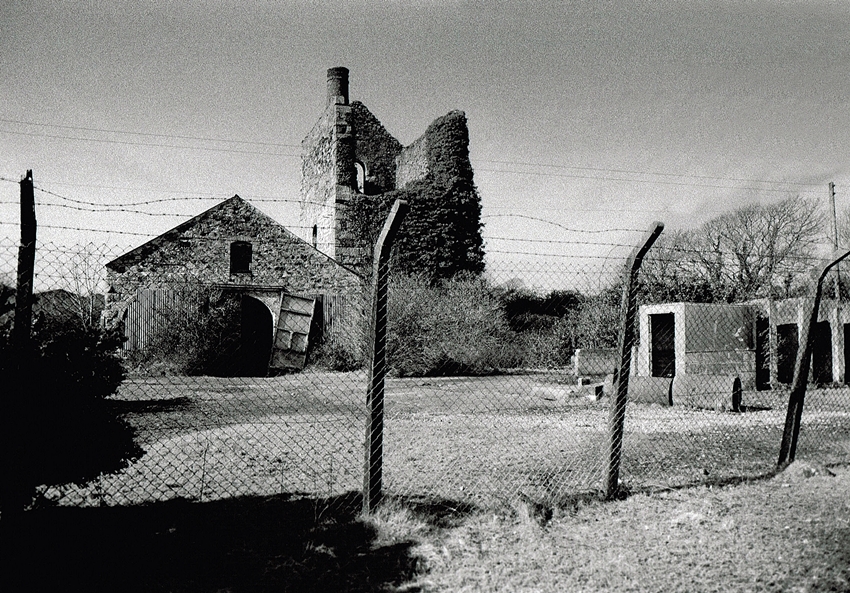 Great Wheal Busy 5: The site has been recently renovated (2016) new doors and roof have brought the buildings back to life. 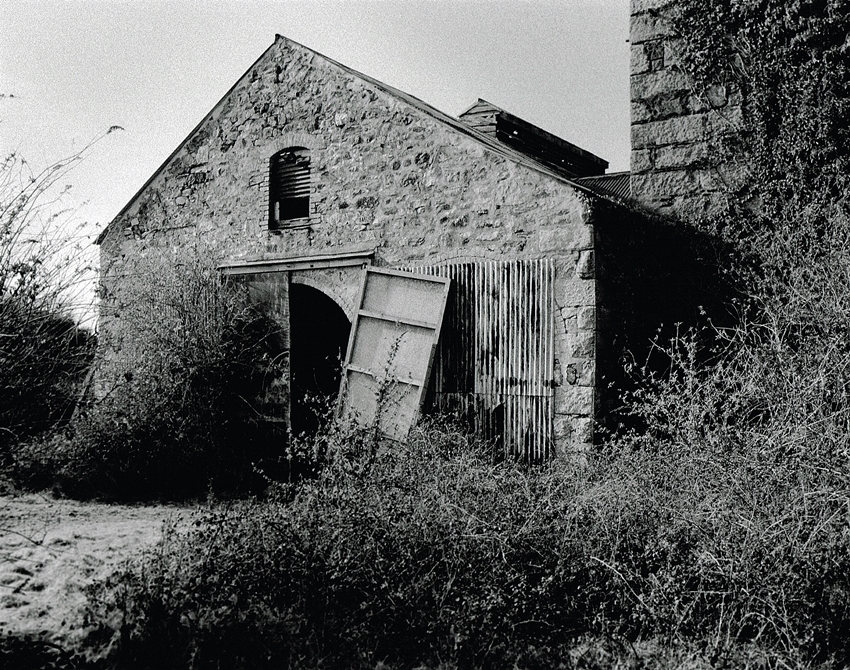 Great Wheal Busy 6: The Boiler House still had many of the supporting blocks for the boilers. 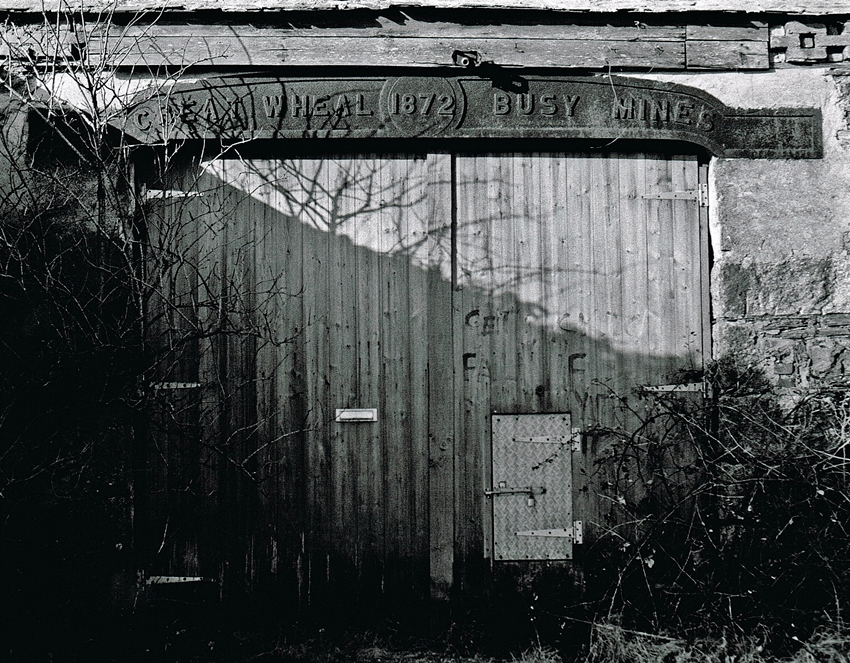 Great Wheal Busy 7: One of the entrances to a large building on the site. This housed the Mine Smithy, Workshops and the Miner’s Dry. This impressive cast-iron lintel was made at the Perran Foundry dated 1872. 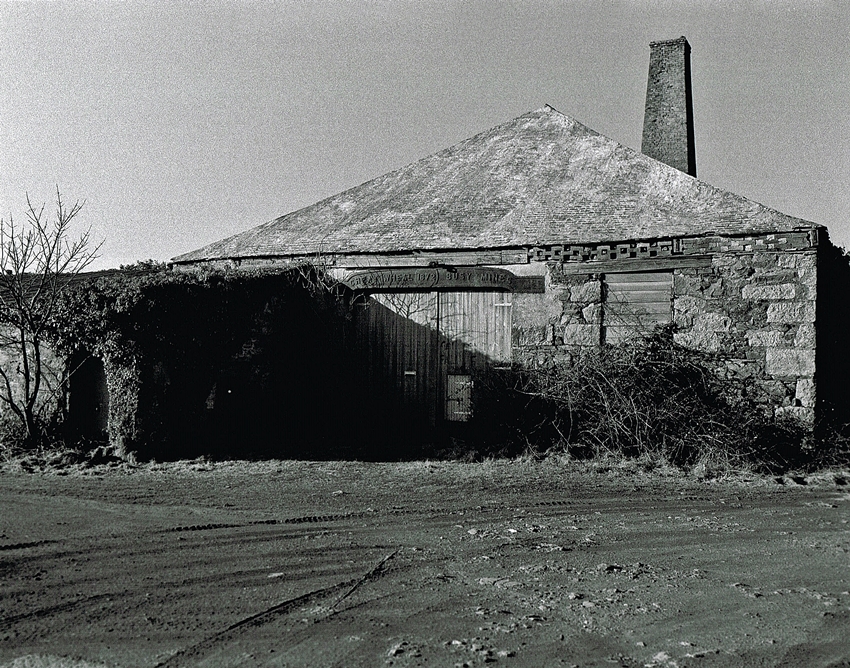 Great Wheal Busy 8: A wider view of the Smithy and Workshops. Sadly his building has badly deteriorated in recent years.

The final chapter of the mine occurred in 1907 when an Anglo-Belgium company re-opened the sett for Arsenic production. A new secondhand 85″ engine was erected in the house, processing floors and an Arsenic Calciner and Flue were erected. The mine finally closed in 1924. 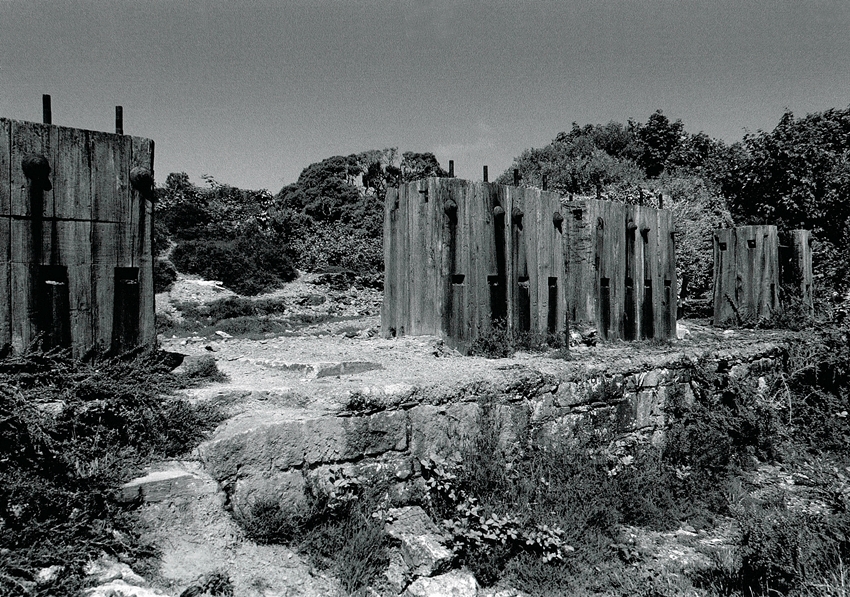 Great Wheal Busy 9: There are significant remains of the processing plant on the site. These are the mountings for the mines Californian Stamps erected in the early 1920’s. 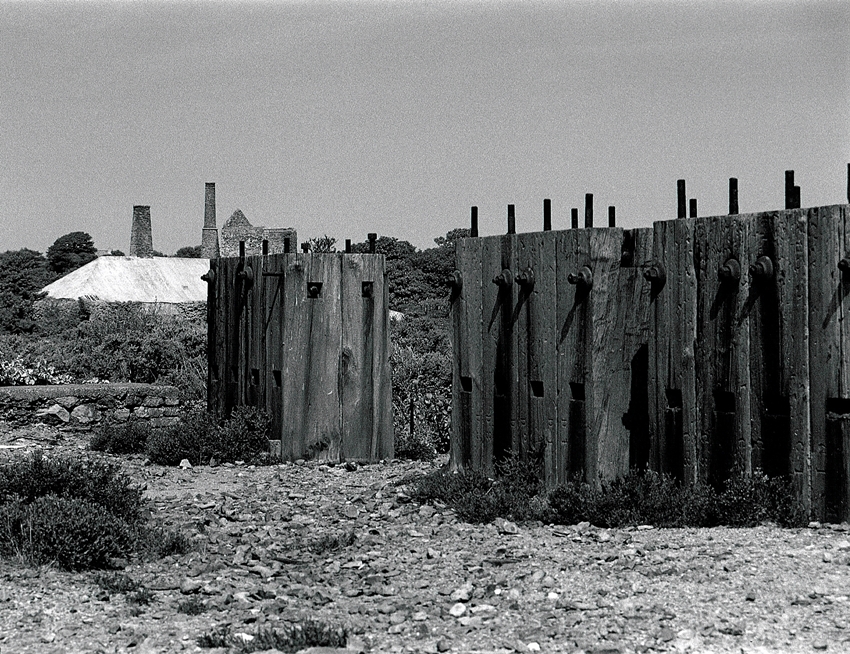 Great Wheal Busy 10: The stamps mountings from the other side. The Engine House and mine buildings are in the background. 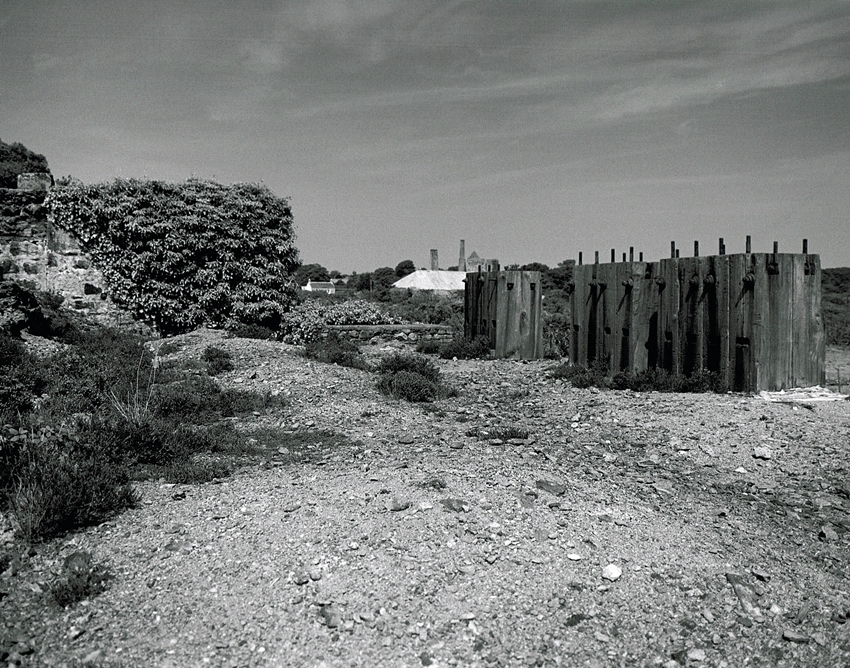 Great Wheal Busy 11: A wider view of the Stamps foundations. On the left of the image are ruined buildings associated with the processing area. Great Wheal Busy 12: A view of the Engine House and Smithy, this area has become quite overgrown in recent years. Great Wheal Busy 13: The Arsenic Calciner at the mine, the extensive bracing on the walls were made at Carn Brea foundry. The Calciner was used to roast the mined ore to remove the Arsenic impurities. This in turn was sold as a valuable by-product. Great Wheal Busy 14: A wider view of the Calciner, the Arsenic labyrinth is on the left of the image. 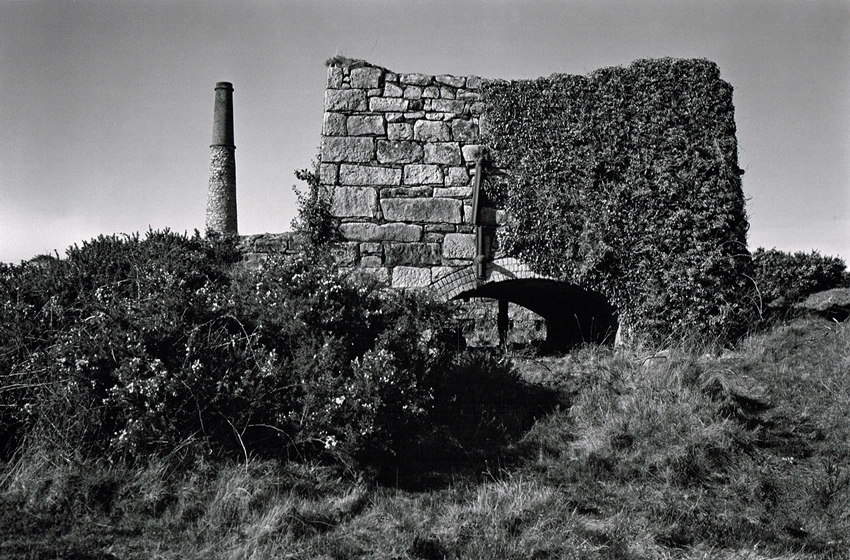 Great Wheal Busy 15: A final image of the Calciner. This was built in 1907 the remains of the flue are behind which leads to the stack in the background. The refined Arsenic would have been recovered from the flue where it was deposited as the fumes cooled. 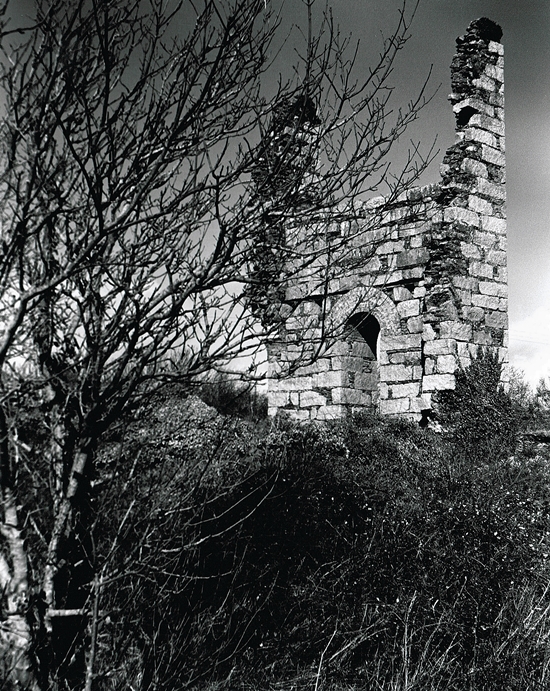 Great Wheal Busy 16: The remains of the Bob Wall on Black Dog Shaft. This dates from 1872, the mine was closed in 1873. Because of the closure the engine was never erected. It was left lying on the ground next to the house where it was eventually scrapped. 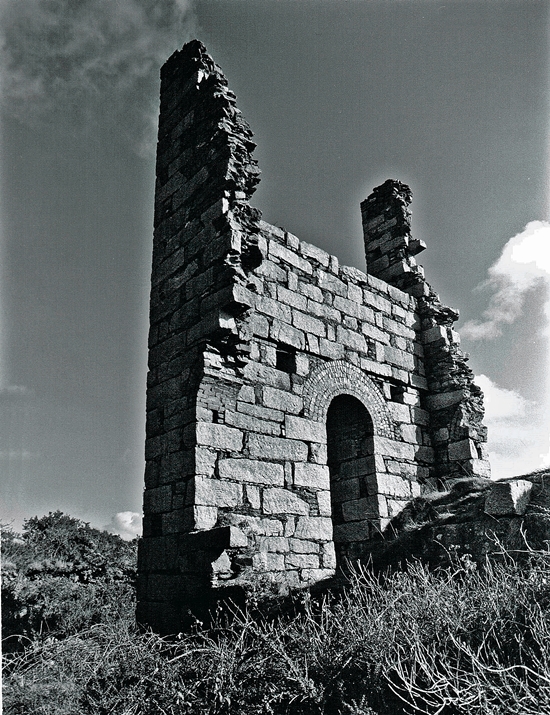 Great Wheel Busy 17: A second image of the Bob Wall from the other side. This area is now heavily overgrown.

The majority of these images were taken in the mid 1990’s. It has become of of my favourite places to walk around. The building have been very well preserved but sadly the forge is in a bad state.

The remaining images on this page were taken in 2016. Recently printed in the darkroom they really show how the site has changed over the years. 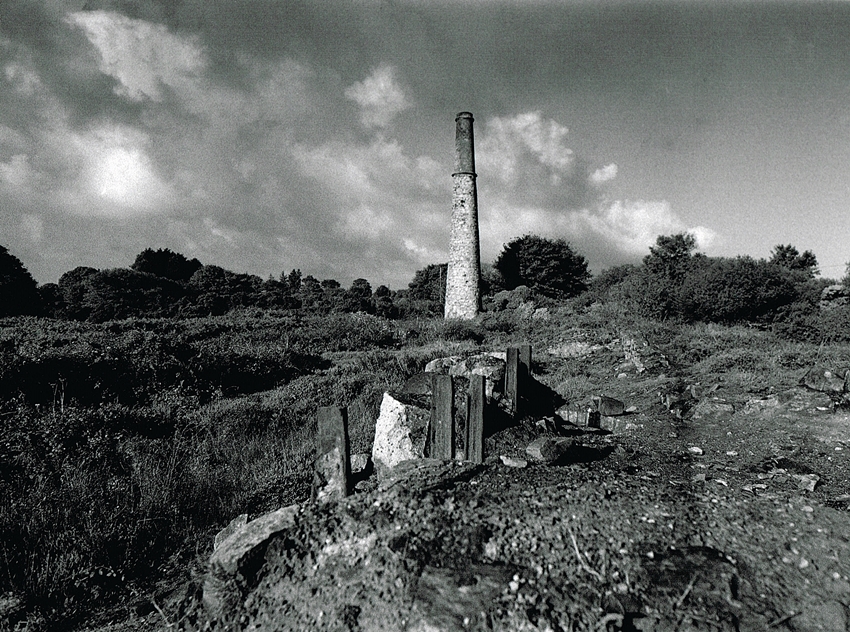 Great Wheal Busy 18: These are the remains of the Calciner Flue. It leads to the chimney in the background. Great Wheal Busy 19:  This is the Brunton Calciner at the site. A rotating hearth inside would cook the ore and release the Arsenic impurity. 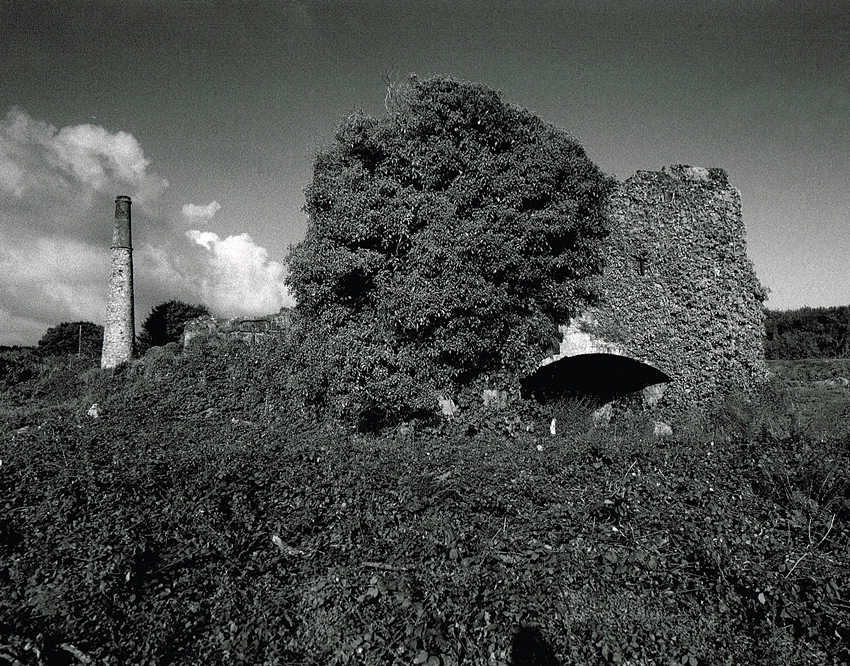 Great Wheal Busy 20: Another image of the Calciner, the chimney is in the background. Great Wheal Busy 21: The smithy has lost so much of its roof over the years. Generally it is in a sad state and requires urgent renovation. It is a unique building that deserves looking after. Great Wheal Busy 22:  The wall closest to the camera had suffered a knock from a vehicle and was in a perilous state. 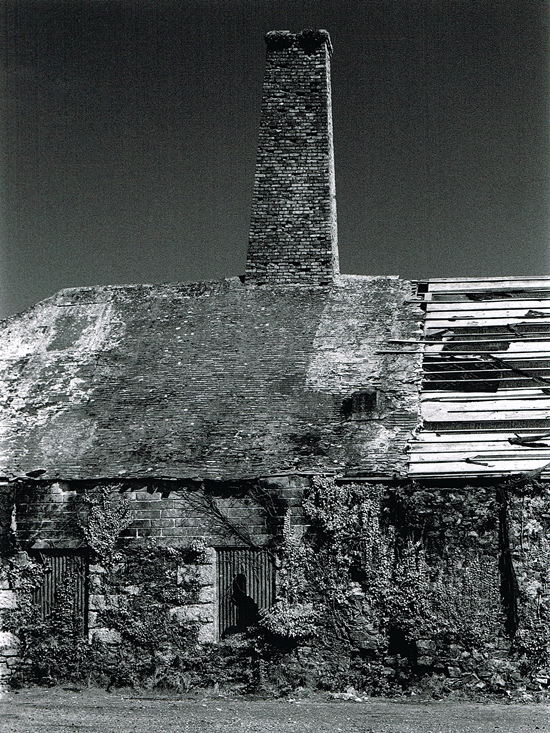 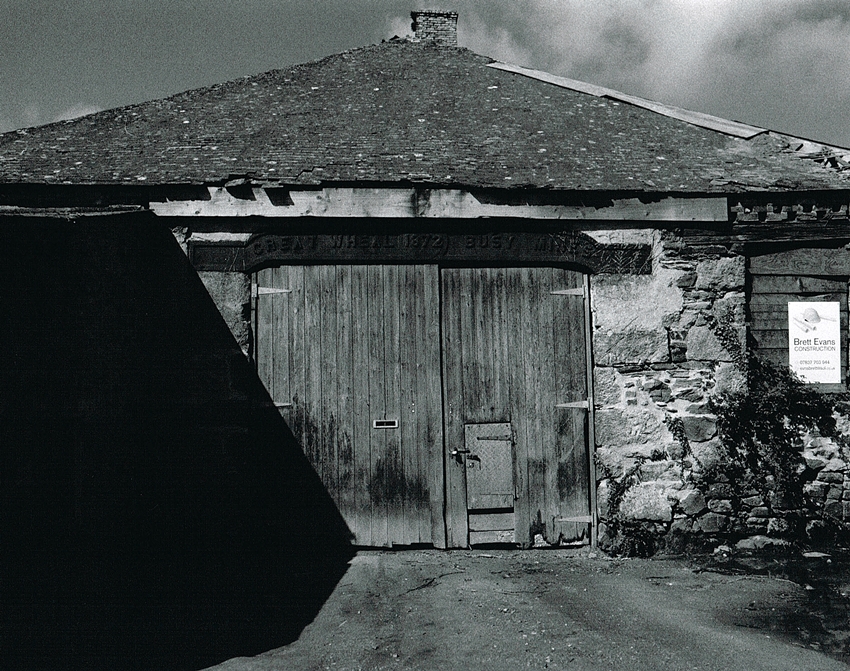 Great Wheal Busy 24: The entrance to the Smithy still boasts the very impressive beam. The building is now used as a mechanics garage. 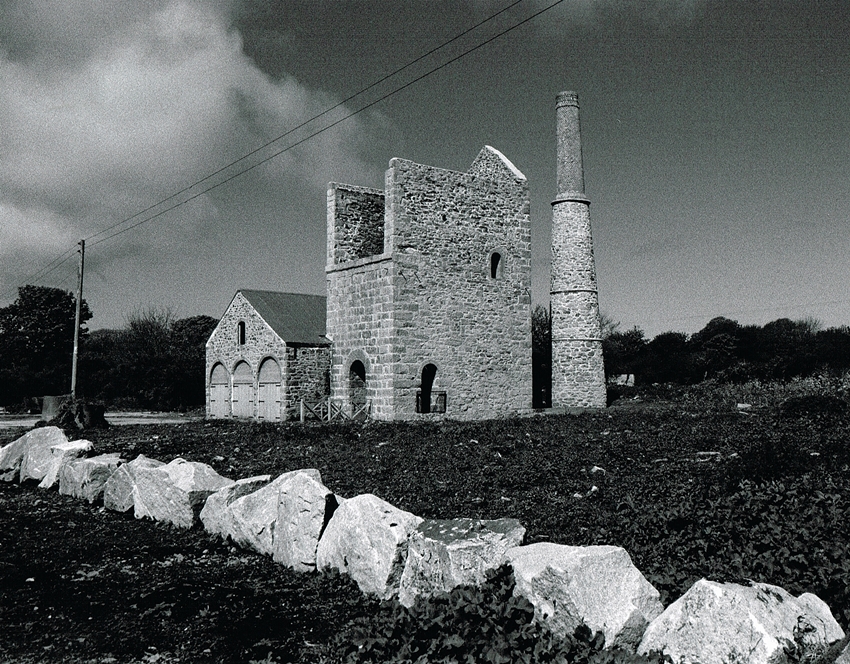 Great Wheel Busy 25: Finally, the renovated Engine House. It had been very well done with due care and attention. The Boiler House has also received treatment with new doors and a new roof. Undoubtedly all this work means the buildings will survive many more years to come. Well done to all who participated.