The Roskear Shaft Site in my opinion is one of the most interesting in Cornwall. It is such a shame that the buildings have been so needlessly destroyed. This area is an important part of Cornish Heritage and it should have been preserved and protected years ago. 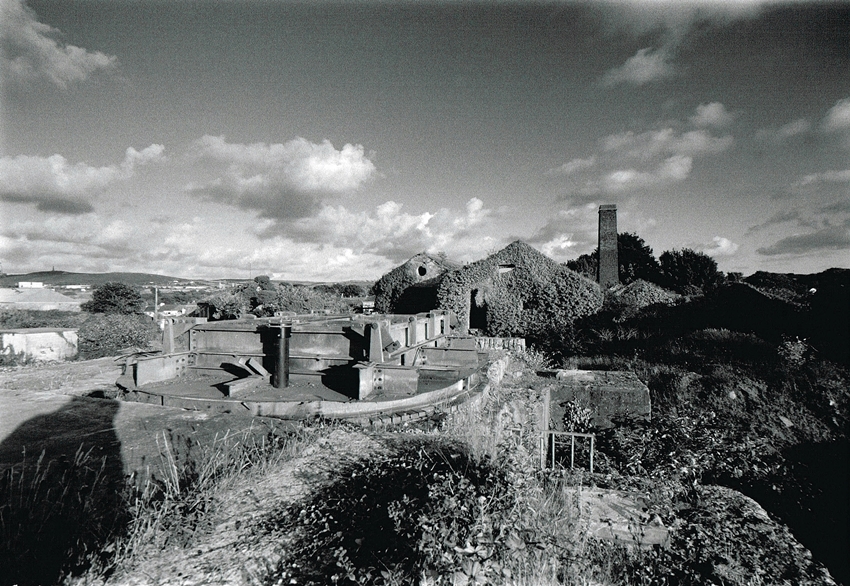 This first image is looking South across the capped New Roskear Shaft, in the background are the remaining buildings associated with New Dolcoath Mine.

The site has a long history of mining dating back to the early 1800’s when South Roskear Mine worked the sett. The mine closed in 1853 but was reopened as Roskear Mine in 1863, the reworking failed and the mine closed three years later.

In 1869 William Bennett Leased part of the site in order to build his planned Fuse Works. The main factory was on the site of the old Lidl Store at Roskear Terrace, offices and workshops were on the other side of the road on the Roskear site. The fuse factory was closed in the early 1920’s, the land and buildings were purchased by the New Dolcoath Company in 1923. 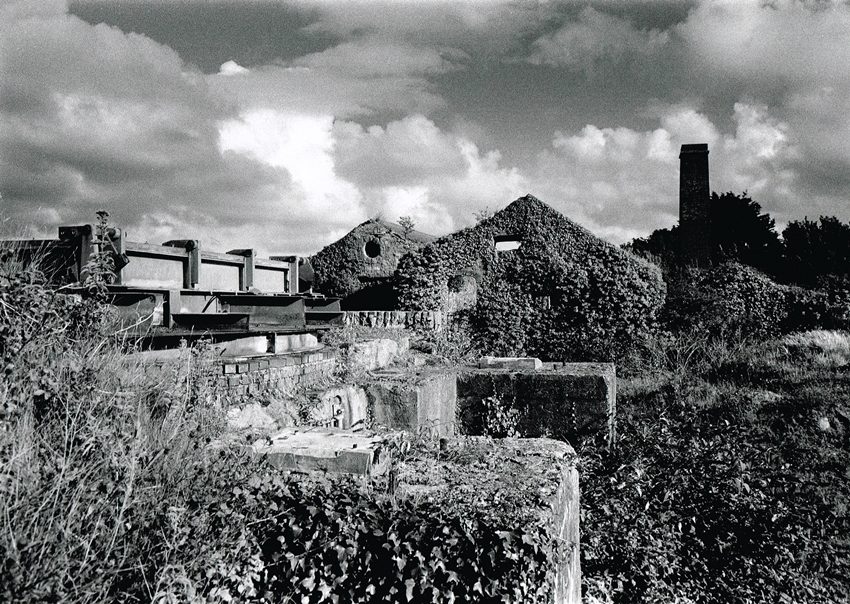 In the foreground are the supports for the headgear that was erected by New Dolcoath Mine in 1923.

Roskear Shaft was begun by the Dolcoath Company in 1923. After the closure of Dolcoath Mine in 1921, this was planned to be the focus of the New Dolcoath Mine. The circular, brick-lined, shaft was sunk by shaft sinkers from South Wales. This eventually reached 2000 feet deep by late 1926.

Levels at 1700, 1900 and 2000 feet intersected a number of lodes. Some limited stoping was done on the Roskear Complex for Wolfram and Tin. Although some of the lodes showed promise the company ran out of capital and attempts to raise more failed. Due to this operations ceased in December 1929 and the company went into receivership in April 1930.

Many of the remaining buildings on the site date from the Dolcoath enterprise. 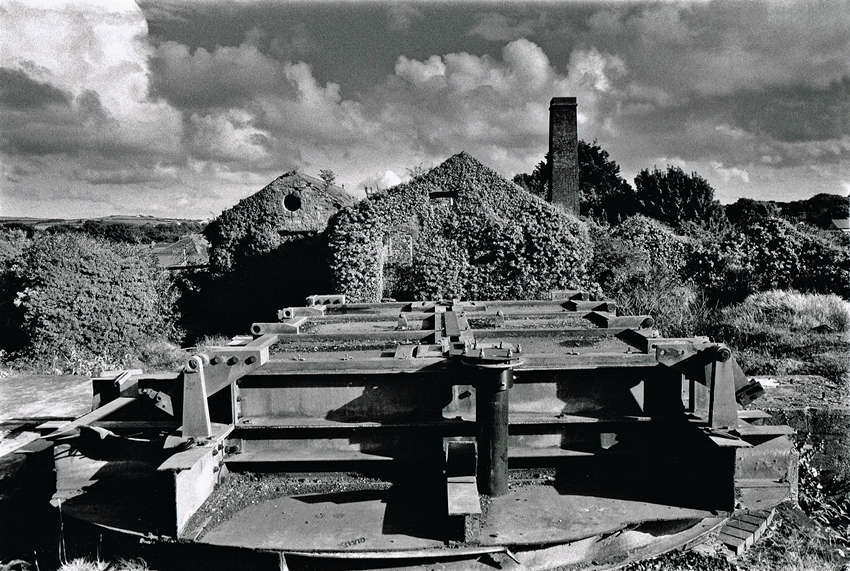 The collar of the circular shaft can be seen clearly, in the background is the (from Left to Right). Compressor House, Winder House and Boiler House.

Many of the lodes found in the 1920’s became very rich in depth. Had they been developed it is likely that Dolcoath would have persisted into the 1990’s and bought out South Crofty rather than the other way around – such is mining! 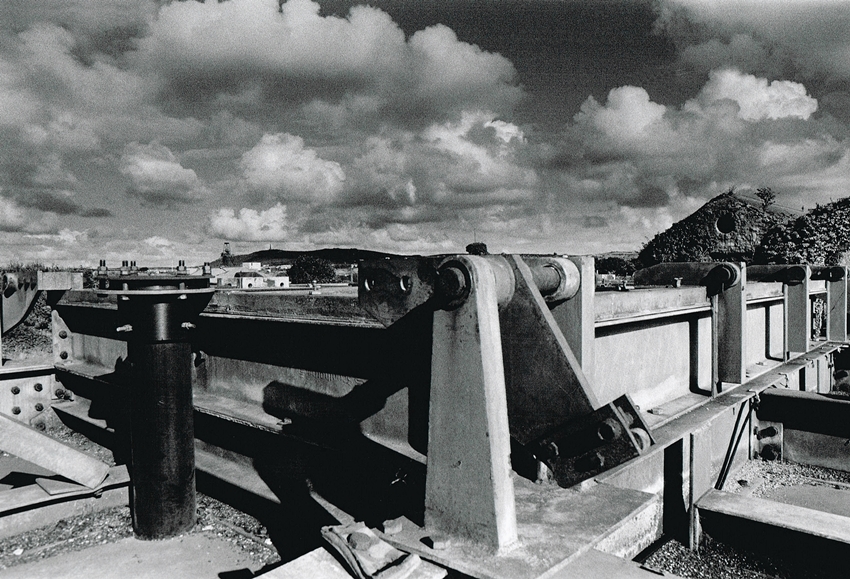 A close up view of the hydraulic cap over the shaft installed by South Crofty.

Once the Dolcoath and Roskear lodes began to be exploited Roskear Shaft became a major (updraught) ventilation shaft with large fans at the collar. Many local people will  remember the plume of warm moist air that rose above the shaft in Winter, visible for miles. 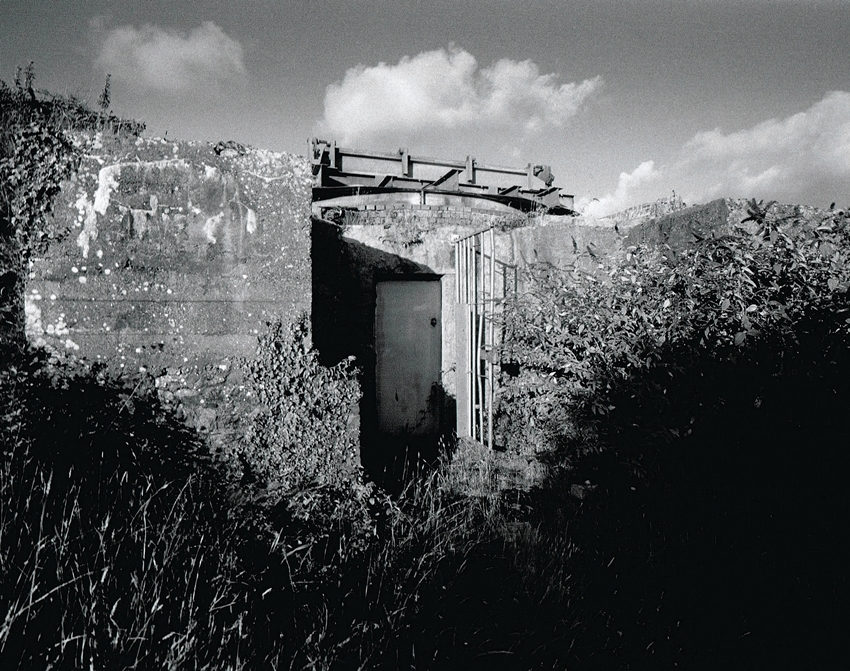 The two blocks to the left and right of the door date back to the original shaft construction. A closer view of the securely locked door used by South Crofty to access the shaft. 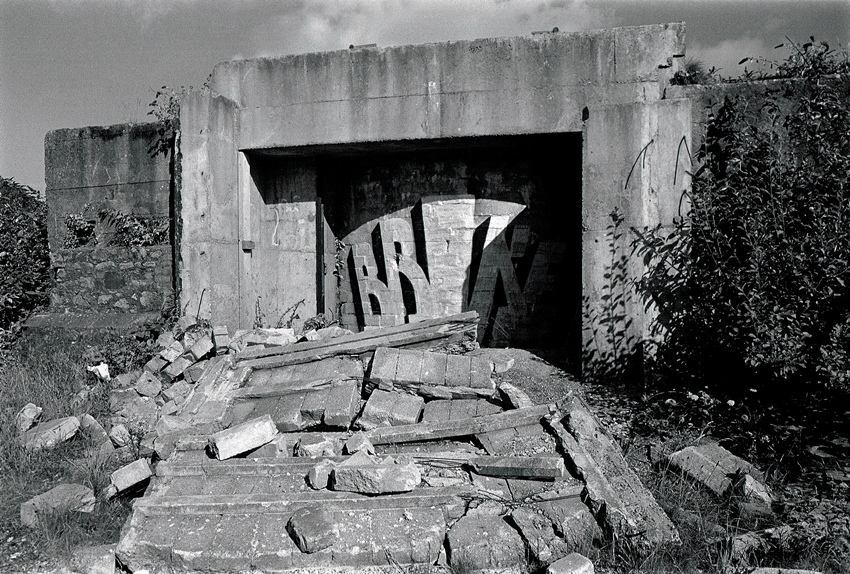 Sadly all the buildings built by South Crofty along with the headframe have been removed. 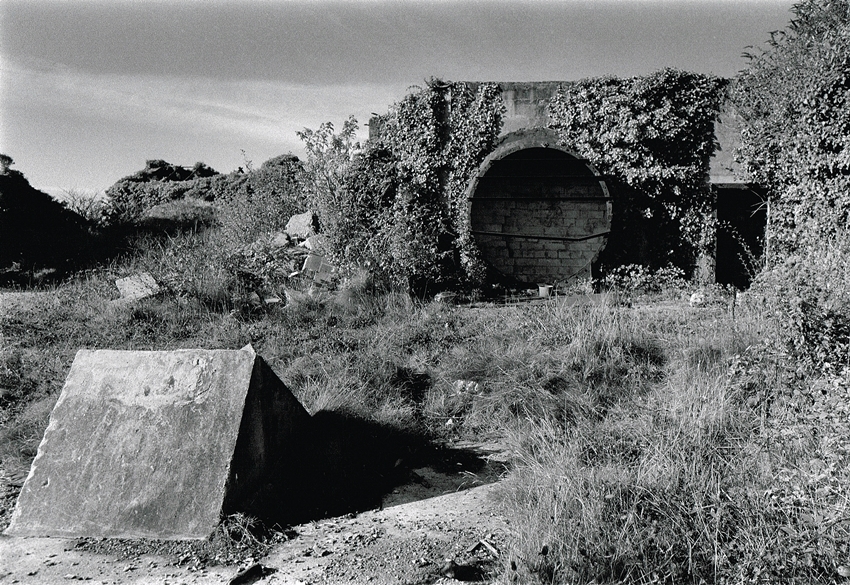 In the foreground is one of the supports for the headframe installed when the shaft became the secondary egress for South Crofty. 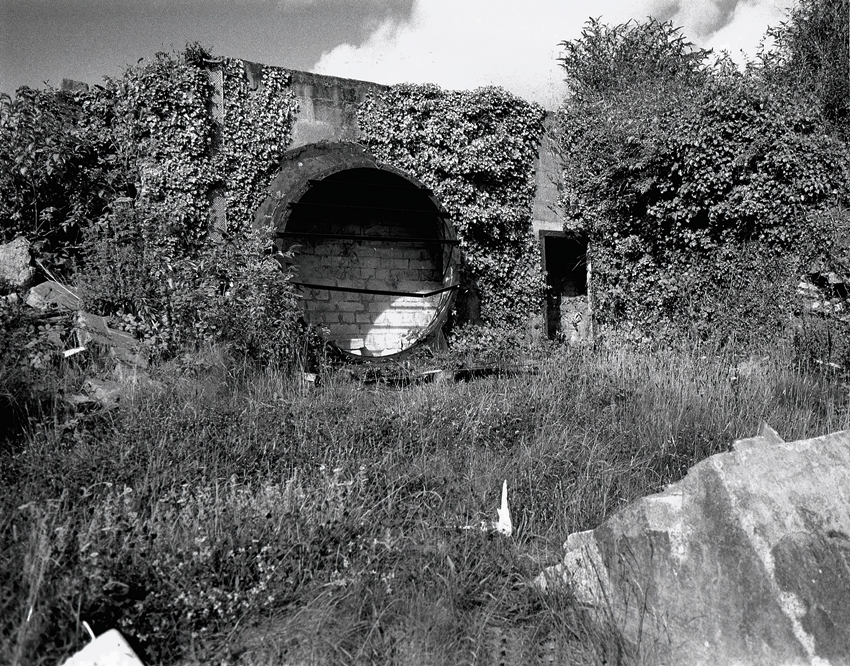 One of the circular intakes for the fans that were installed here to ventilate the workings.

The rest of the images on this page now look at the remains of the buildings on the Roskear Shaft complex erected in the 1920’s by the New Dolcoath Company. 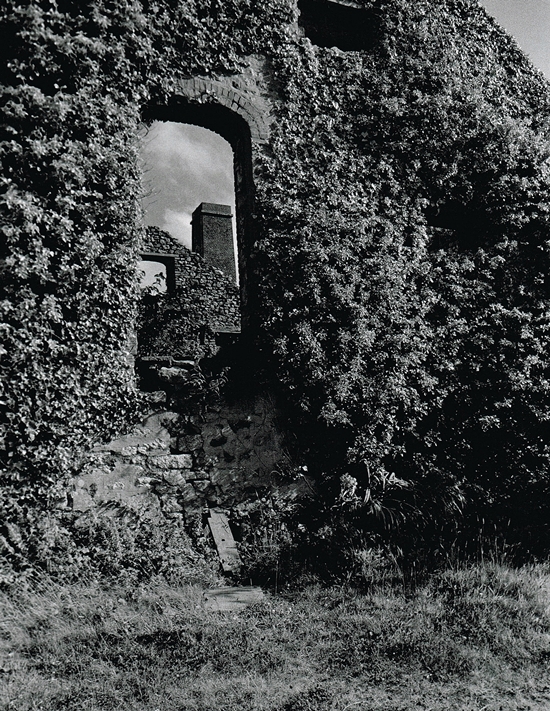 The external wall of the Winder House that served the Roskear Shaft. The upper window is where the rope ran through to the top of the headframe. 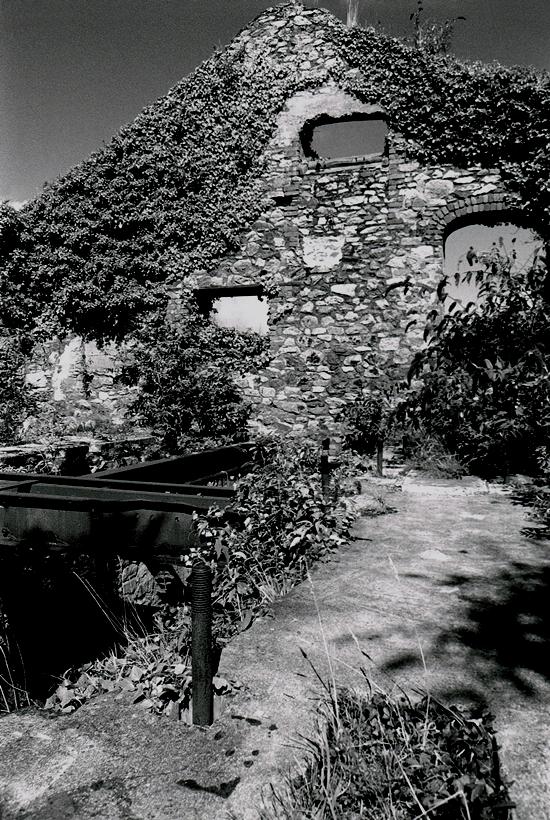 The same wall from the inside of the Winder House. The holes for the winding rope can be seen clearly. 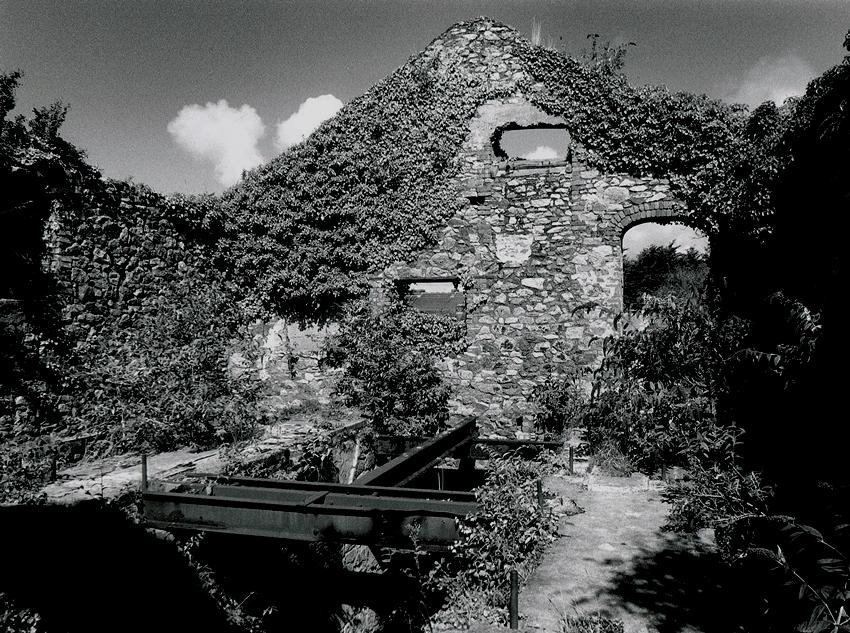 A wider view of the Winder House, the mounting bolts and supporting girders for the winder are still in place. 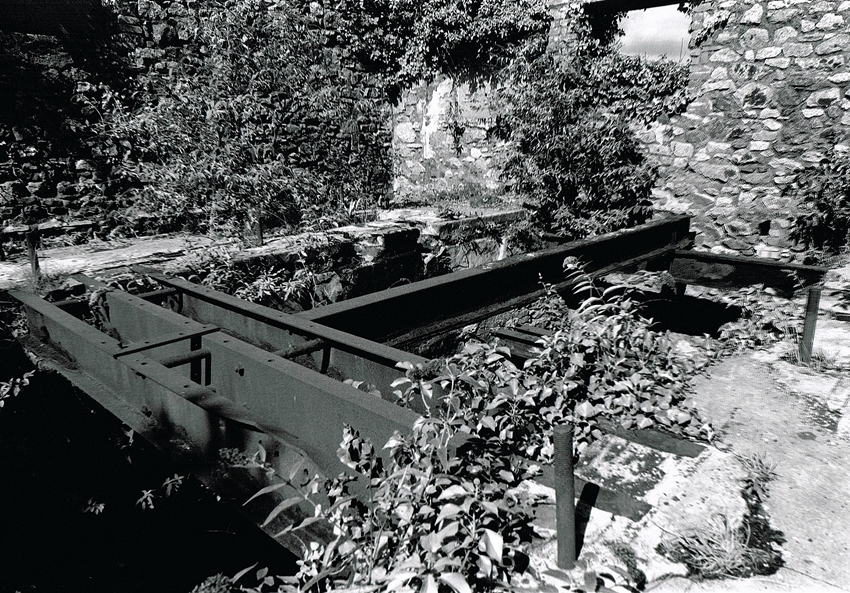 A close up of the mounting girders. The winder was in place until the late 1980’s when it was removed. It now sits on its original mountings at Harriet’s Shaft Dolcoath Mine.
For more images Click Here 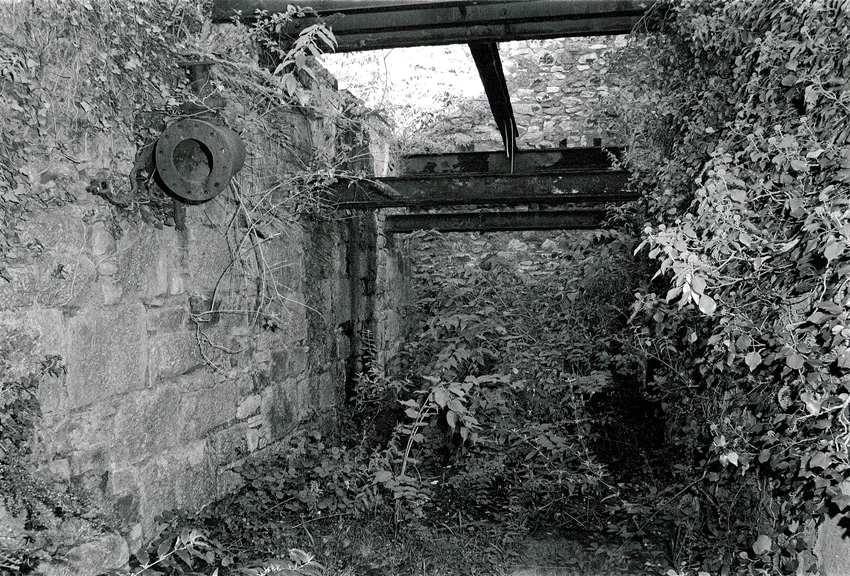 Underneath the supporting girders, this is where the drums holding the wire rope were situated. 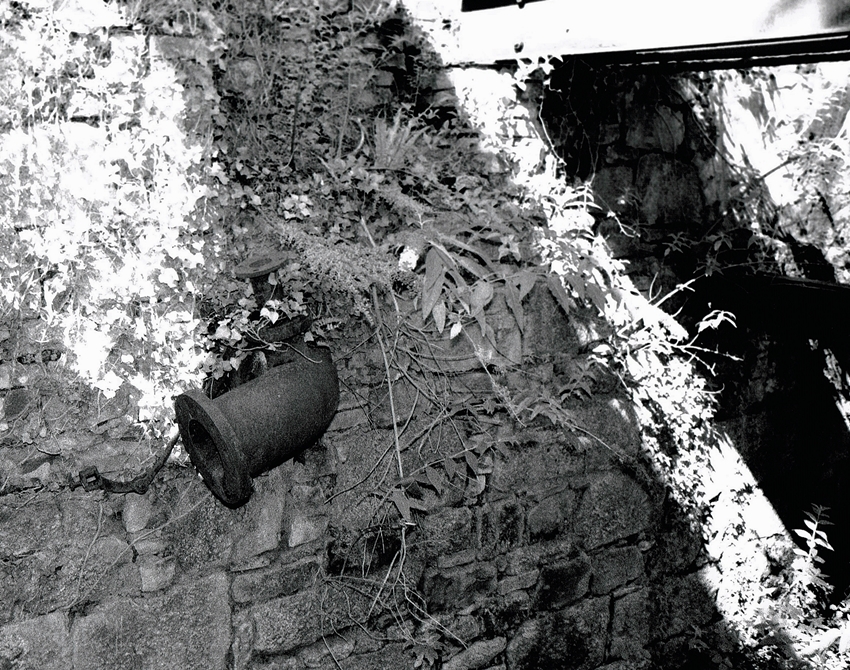 On one wall there is still a steam pipe. This would have fed steam to the winder from the Boiler House next door. 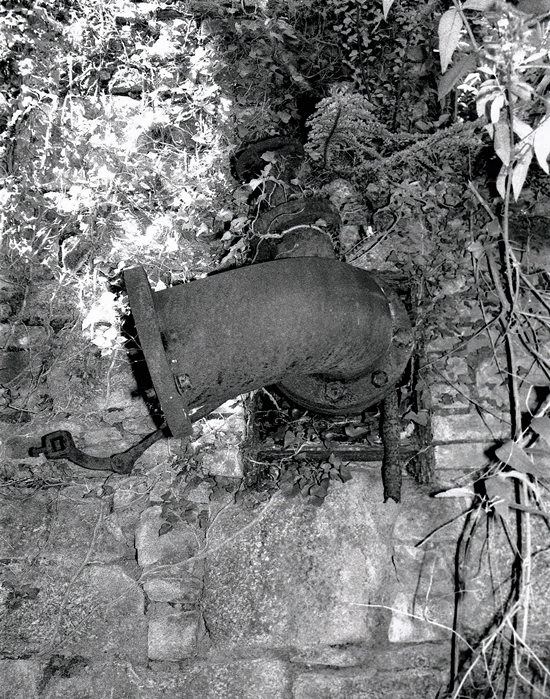 It is quite amazing that it is still here. 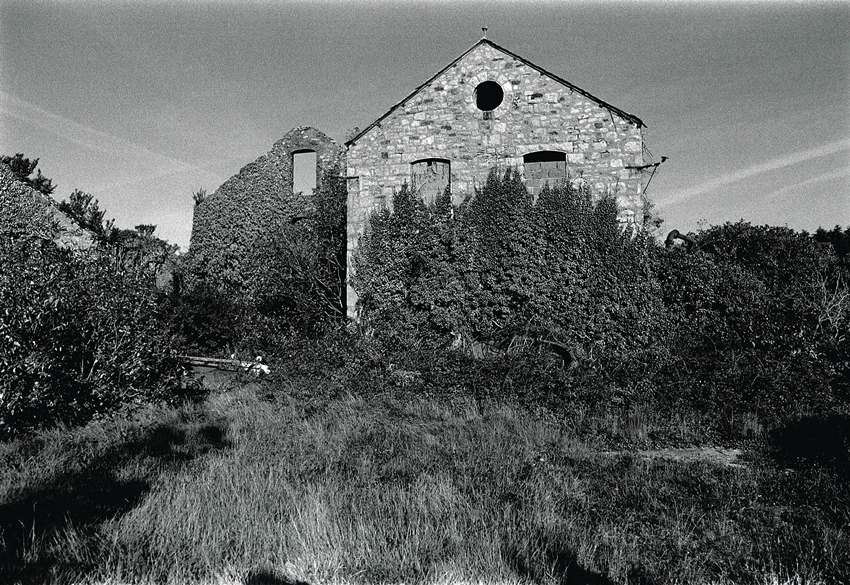 The outside of the Winder House is on the left of the image. The Boiler House was on the extreme left, the building on the right is the Compressor House. 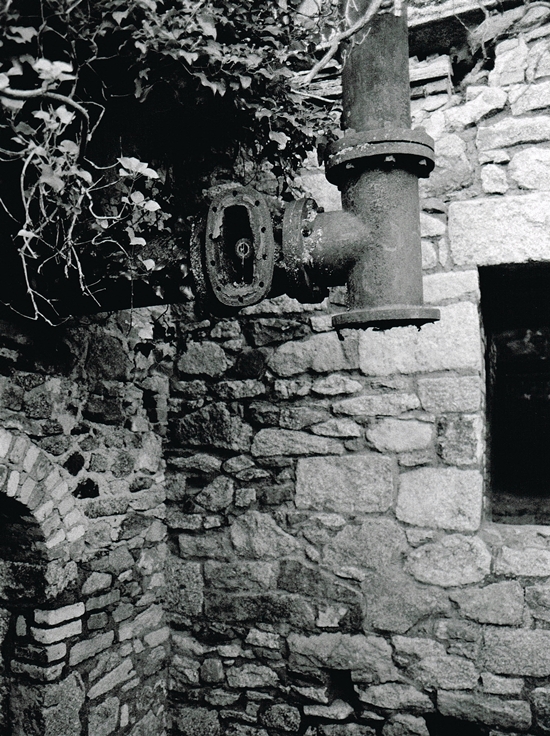 Surprisingly on the outside of the Compressor House are still these huge pipes mounted on the wall. 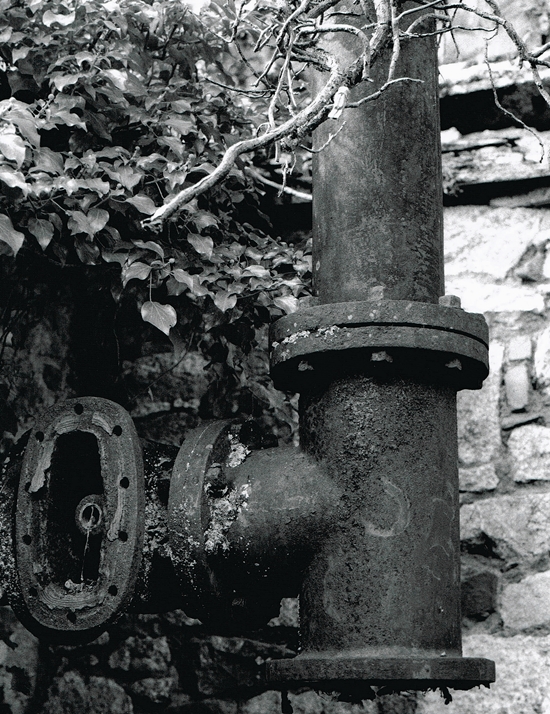 A closeup of the pipes from the Compressor House. One of the ruined storehouses on the New Roskear site. 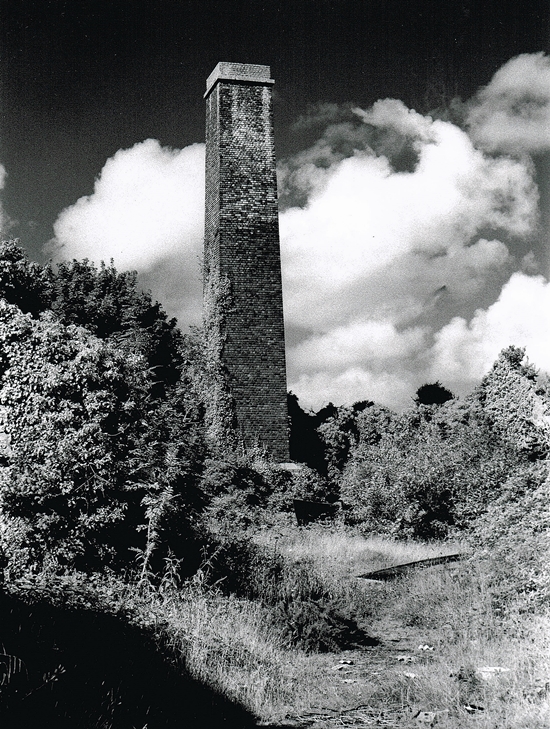 Finally for this page, at the back of the site is the distinctive square chimney that served the Boiler House.

This whole site is deteriorating badly and should not be entered as the buildings are in a dangerous condition.